NEW YORK, N.Y. – In a report released August 15, 2018, Harry Markopolos (Madoff whistleblower and Certified Fraud Examiner) details how General Electric (GE) has set up their company to fail based on its long-term care (LTC) insurance line. When (not if) this house of cards tumbles, it will be a worse collapse than the Enron (estimated $74 billion) and the Worldcom ($3 billion loss) COMBINED.

“Unfortunately, most investors are not trained as Certified Fraud Examiners (CFE’s) and have no idea of what forensic accounting analysis entails. The biggest clue that this is an Enronesque accounting fraud were the $53.5 Billion in Negative Surprises in 2017 and 2018 which destroyed over $130 Billion in market capitalization. There were two dividend cuts totaling $8 billion per year, $15 Billion added to LTC reserves, a $22 Billion goodwill write down on Alstom, and an $8.5 Billion Long Term Service Agreement (LTSA) restatement of 2016 and 2017 earnings. When you see that many large dollar adjustment in such a short time frame that’s not house cleaning, it’s a red flag that the prior years’ financial statements were false, internal controls are weak to non-existent, and there are a lot more cockroaches in the GE earnings’ kitchen that you haven seen yet. Our Whistle blower Report only details $38 Billion in accounting fraud, but we know we didn’t catch everything. Only GE’s accounting department knows where the rest of the skeletons are buried.”

This story took on a personal interest since this writer’s first staff accountant job was at General Electric in the long-term care division and personally saw the issues that are outlined by Harry Markopolos.

In January 2021, a change in accounting policies will affect the way long-term care insurers will value the liability for future years. Insurance companies must have a certain amount of reserves to offset the claim payouts to be paid out in the coming years for claims. Insurance companies legally must have another set of accounting standards aside from Generally Accepted Accounting Principles (GAAP). All insurance companies need to keep Statutory Accounting Principles (SAP). One of the key differences between these two principles is that if a company has to pay out money for insurance claims, assets accounted by GAAP (buildings, furniture, software etc) must be removed as they are not convertible to cash for claims. SAP requires reserves to be held (cash and cash equivalents) to offset those payouts. The GE financials based on SAP currently show bleeding losses that they won’t be able to offset with income. There is a $10.5 billion mismatch difference between the $30.4 billion needed in statutory reserves and the $19.9 billion in GAAP reserves. That amount is growing. In 2016 that was a 43% mismatch; it is a mismatch of 52% in 2018.

GE LTC’s closest competitors, Prudential and Unum have already taken charges (basically income losses) against their 2018 earnings. Prudential took a $900 million loss while Unum took at $550 million dollar loss. Both insurance companies did this to get ahead of the 2021 accounting change and to comply with an important accounting principle called Going Concern. (This is an accounting term for a company that has the resources needed to continue operating.) They took these charges sooner rather than later to make sure that they were not caught off guard and can protect their companies. For this same time period, GE decreased their GAAP losses by $6.1 billion.

Income is earned from policy premiums. This is the amount that a person pays to have the insurance for a promise to have costs paid at a later date. Long-term care is a policy to provide care at either a nursing home or in the insured’s home.  Every year, premiums come in from current policy holders. At the same time, claims go out to pay for current costs of those who start receiving or continue to receive benefits. The difference between the premiums received, less the claims paid out is income (simplified process). However, each year it is necessary to adjust the reserves held to offset future claims.

The change in the accounting policy that will take place in 2021 is to update the basis for how that reserve is calculated. Internal accountants should be familiar with key issues of the policies in order to update the reserve calculation. The reverse also holds true in that shareholders should be able to know the value of the contracts, or premiums received. The assumptions that are done in accounting are not updated to consider life expectancy or the rising costs of long-term care. An example of this would be if a policy is sold for $1,000 annually, what is the current value of that policy against future claims? If a younger person, age 30-40 purchases that policy until they need care, then the potential of premiums received could equal at least $30,000 to $40,000 until claims are paid out. How long will that policy holder need long-term care? How long will they live with claims being paid out for them? It becomes easy to see that in just a few years of claims paid out on this policy will result in a loss. The company needs to hold a portion of that policy’s future claims in reserve in order for the company to not pay out so much money that they can no longer stay in business. (Going Concern Principle) One of the biggest issues with the way GE has sold their policies is that at the time these policies are sold, that rate will generally not increase over their lifetime. An adult purchasing a policy at 30 will pay that rate until they start having claims paid out. These claims will also pay out the actual costs of care up to the daily benefit maximum until death. (More issues related to this will be addressed later.)

To better give investors the accurate picture is the reason for the change in accounting rule to occur in 2021. This will eliminate any opportunity to create that GAAP/SAP reserve mismatch. “Insurers also will be required to use a standard discount rate to measure their liabilities. The rates will be pegged to the yield from high-quality bonds, which is lower than the discount rate many insurers use now – the rate they earn on their investment assets. A lower discount rate would increase the current value of the obligations on insurers’ balance sheet.” This will create higher reserves and fewer losses due to claims.

GE has been working hard to create a false narrative to hide the inadequacy of their reserves. 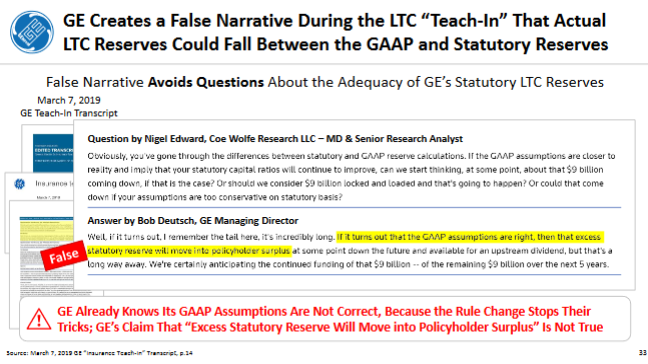 As this chart shows, GE assumed losses resulting in loss ratios of 342% and 100%.

GE offloaded some of its LTC reinsurance to LifeCare. This proved to be a very poor decision as they selected to reinsure itself with a company that had almost no surplus. This left GE with those losses.

Mr. Markopolos has laid out eight keys areas that GE is hiding and that will be its downfall: 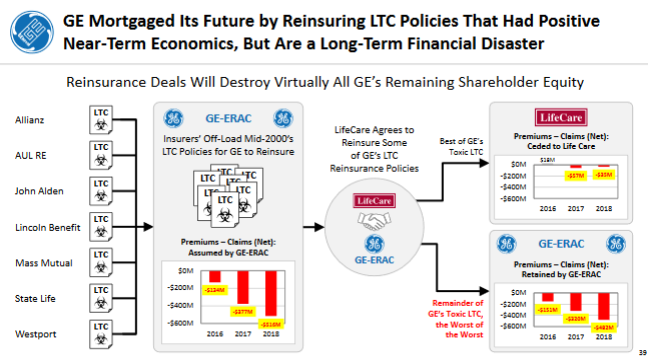 Seven insurers had GE re-insure their worst policies. The value of the premiums paid less the claims paid out resulted in a loss of $516 million. GE was able to get LifeCare to re-insure some of these  policies to cover a $35 million loss leaving the remainder of $482 million with GE.

The reinsurance risks were only some of their issues. As stated above, their polices are generally for life. The average age now of policy holders is 75 and is approaching an average age of 76-80 years old. This has caused their paid claims and losses to increase at an exponential rate. However, the situation will become even more dire. As of 2018, only about 14% of their policy holders have filed any claims. This means that over 86% of the claims have not yet been filed. 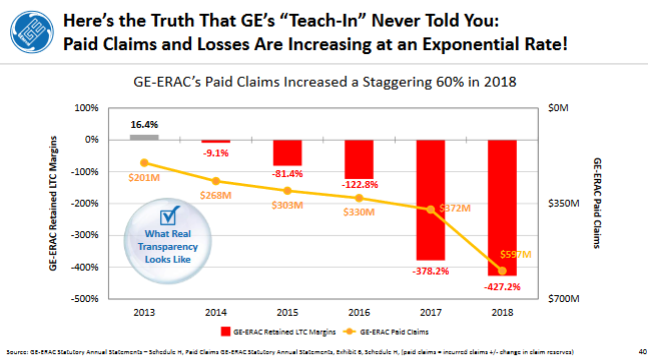 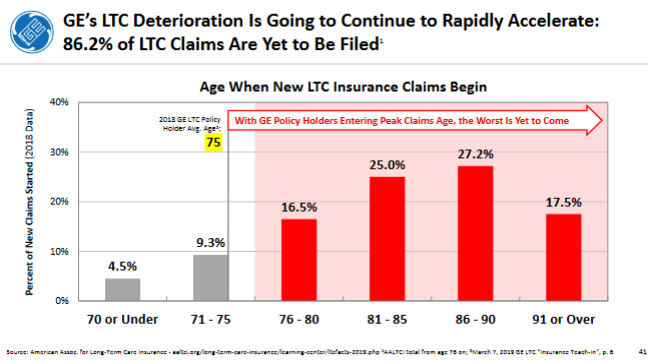 At this point, the question that could be coming to our mind is:  how did this happen? One of the reasons is that it is part of GE’s management culture to move their executives and internal auditors around to “learn the business”. This resulted in CEOs from Lighting, Transportation, Plastics, Real Estate and Power being in charge of the long-term care division. These CEOs did not have an insurance background and they wouldn’t stay long. The internal auditors’ length of time in any industry was six months. This is not enough time to learn what is happening in any division to spot potential problems.

These problems were known well back in 2003. In an article in the Insurance Journal titled, “ERC faces an uncertain future,”  they detail the CEOs being moved around and the issues that result from that. (ERC is GE’s Employers Reinsurance Corporation). “GE-ERAC is sitting on a bunch of long-tail liabilities; it doesn’t appear to have an experienced team of reinsurance professionals running it, and it’s changed focus too many times to have a thoroughly reliable base of clients to acquire.” This may be why the company entered into these disastrous arrangements detailed above. You can read the 2003 Insurance Journal here.

To make matters worse, GE acted as though they first learned of the issues on their books in 2017 in response to elevated claim experience. Here is the timeline of accounting fraud as laid out by Mr. Markopolos and his team: 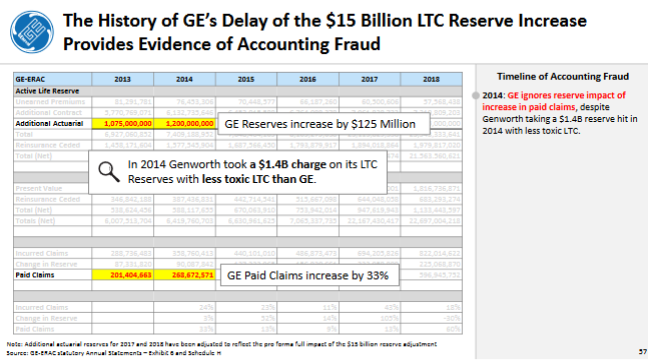 “2015 – Reserves decrease despite continued increases in paid and incurred claims. How is this actuarially possible?” 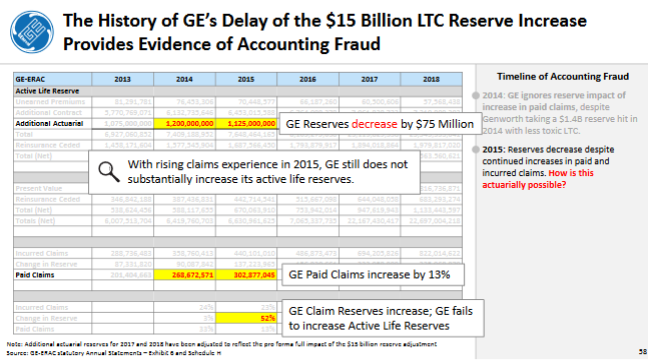 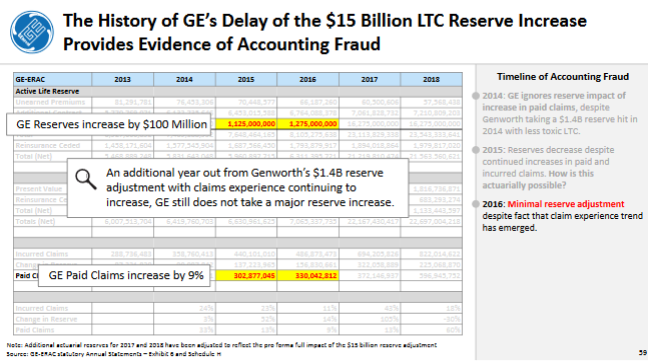 “2017 – Belatedly, in response to elevated claim experience over the prior 4 years, GE conducted an LTC review that led to an insufficient $15 billion reserve adjustment.” 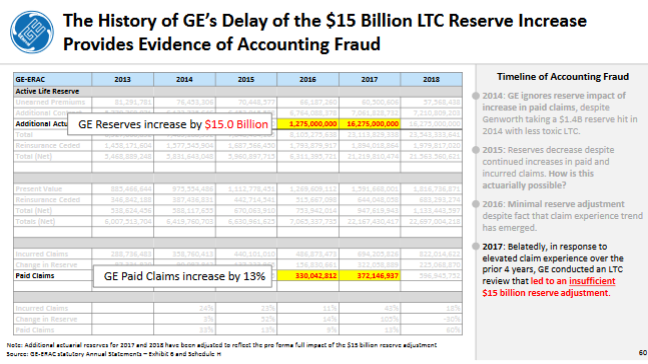 “GE had to ask the Kansas DOI (Department of Insurance) for permission to pay the $15 billion over seven years, because it didn’t have enough cash to pay it all at once.” 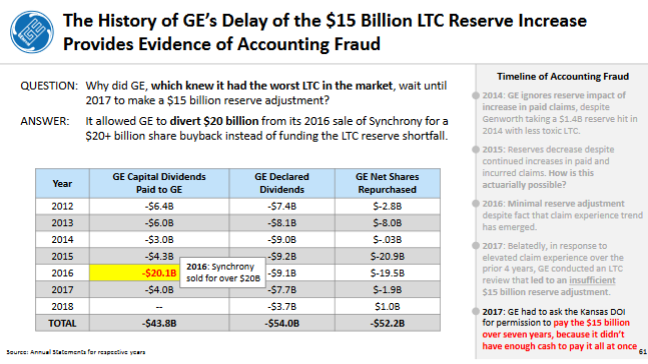 When this writer worked at GE in 2000, the long-term care industry was still relatively new. GE had purchased the company from essentially the first insurance company to create this policy. Many of the employees still employed had worked at the original insurance company. GE’s push at that time, was to be the biggest. Indeed they were. At this time they had just reached their first billion in premiums. (In-force premiums). The next closest company had about 20% of their premiums. There was a very large push to the sales people to make more and more sales of policies. As an employee on the accounting side, it is impossible to learn who the sales team looked for to sell the policies. If the policies were sold to a larger proportion of retirement age customers or to a younger age was not known.

Future installments in this story will include the purchase of Baker Hughes, how GE has committed fraud in other areas and detailing their current lawsuit. To read Harry Markopolos report click here.

This is only part one of a multi-part series, stay tuned.