As reported in the first two parts of this story, Harry Markopolos released a 175-page report stating that General Electric’s (GE) Long-Term Care (LTC) division will cause GE to go bankrupt, GE is committing fraud and that they are insolvent. (Read part 1 and part 2)

Markopolos begins his report stating, “The biggest clue that this is an Enronesque accounting fraud were the $53.5 Billion in Negative Surprises in 2017 and 2018 which destroyed over $130 Billion in market capitalization. There were two dividend cuts totaling $8 Billion per year, $15 Billion added to LTC reserves, a $22 Billion goodwill write down on Alstom, and an $8.5 Billion Long Term Service Agreement (LTSA) restatement of 2016 and 2017 earnings.”

GE  has been going back and restating their 2017 and 2017 earnings and are not clearly stating why. They are hiding details in their financial statements where their competitors give more transparency. The purpose of accounting is for a shareholder to understand how the numbers on a financial statement are reached. They have also destroyed the value of Shareholders Equity with reductions totaling $85.4 billion. 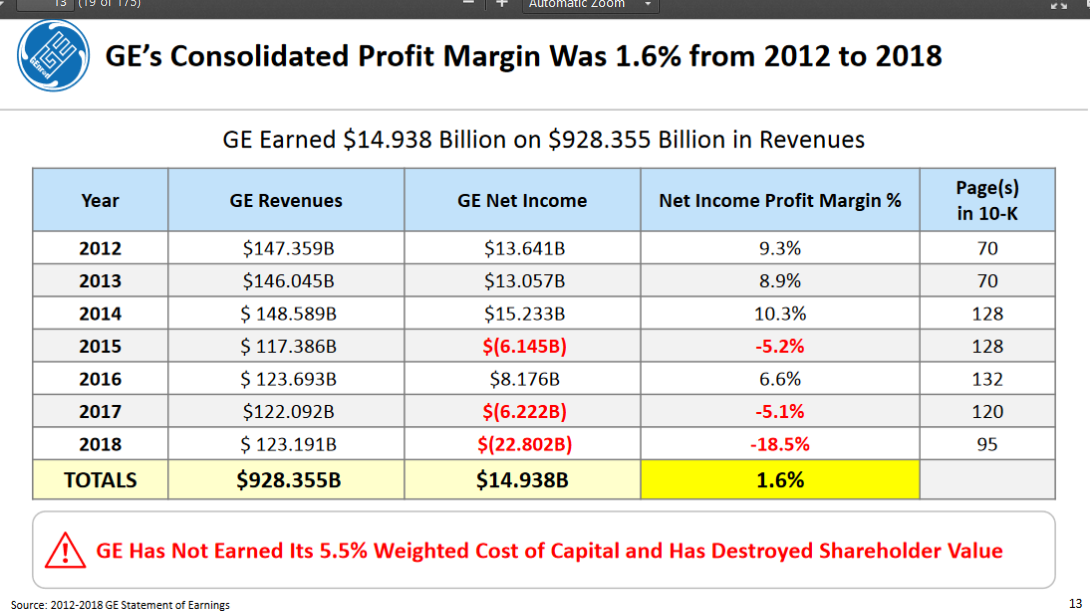 GE has $107 billion in debt and needs to cover $27 billion in pensions. That leads Markopolos to ask, “How is GE, a company that has almost no cash and which earned a total of only $14.9 billion over the last 7 years, going to out-earn over $160 billion in liability with operating business units it hasn’t already sold to stay afloat?”

Currently, GE’s Industrial Business has a working capital deficit of $20 billion. This was partially covered up by the double counting of Baker Hughes General Electric (BHGE). As discussed in the part 2 of this series, GE consolidated BHGE resulting in counting the revenue twice. The end result of this is that GE was able to show their working capital deficit was only -$14.3 billion when it truly is -$20.259 billion. BHGE also added $1.762 in cash from the operating activities.

GE is working hard to hide their fraud in a few different ways. The way they do this is to provide only top line revenue and bottom line profits and to change their financial statement reporting formats every few years.

GE has a long history of accounting fraud which has led all the way to 1995 when Jack Welch was the CEO. In 2002 and 2003, the SEC caught them with $3.4 billion in fraud. The SEC only fined them $50 million or about 2%. This was essentially a green light to continue their ways if they only had to pay $50 million fine. (See part 2 for more details.) The SEC report stated, “GE misled investors by reporting materially false and misleading results in its financial statements.” 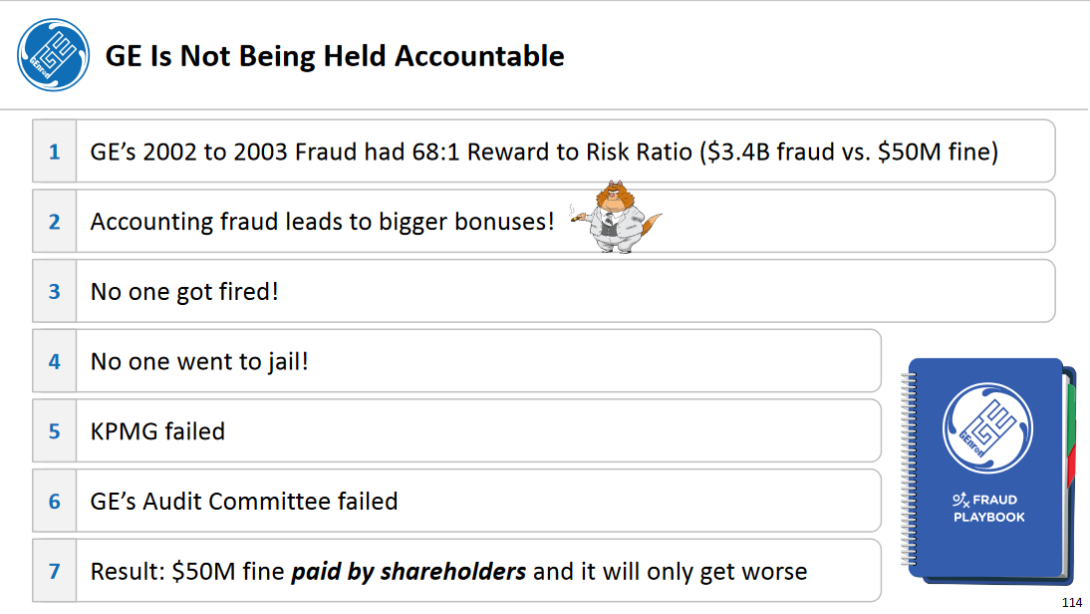 GE continues to overstate and misrepresent its financials. GE’s Aviation division is reporting a compounded annual growth rate. Per their financial statements, they are reporting an operating profit of 11% and 8% growth in revenue. How is this possible?

GE uses Compound Annual Growth Rate or CAGR which is the rate of return required for an investment to grow from its beginning balance to its ending balance. Per Wikipedia, “CAGR is not an accounting term, but it is often used to describe some element of the business, for example revenue, units delivered, registered users, etc. CAGR dampens the effect of volatility of periodic returns that can render arithmetic means irrelevant.”

GE states that in their Aviation division, their 3-year revenue CAGR is 8%. Their actual CAGR rate is 7.4%. Mr. Markopolos states that this could be forgiven as a rounding error. But the Vice-Chairman & CEO of GE Aviation David Joyce also listed their 3-year profit margin CAGR as 11%. Their actual rate is 5.73%. This cannot be attributed as a rounding error. This is almost double the actual rate. This is better described as the result of a CEO who doesn’t know their revenue and profit numbers. As reported in part 1, GE has a habit of moving CEOs around into businesses that they have no experience with.

GE Power is also under Federal Investigation for their accounting tricks. 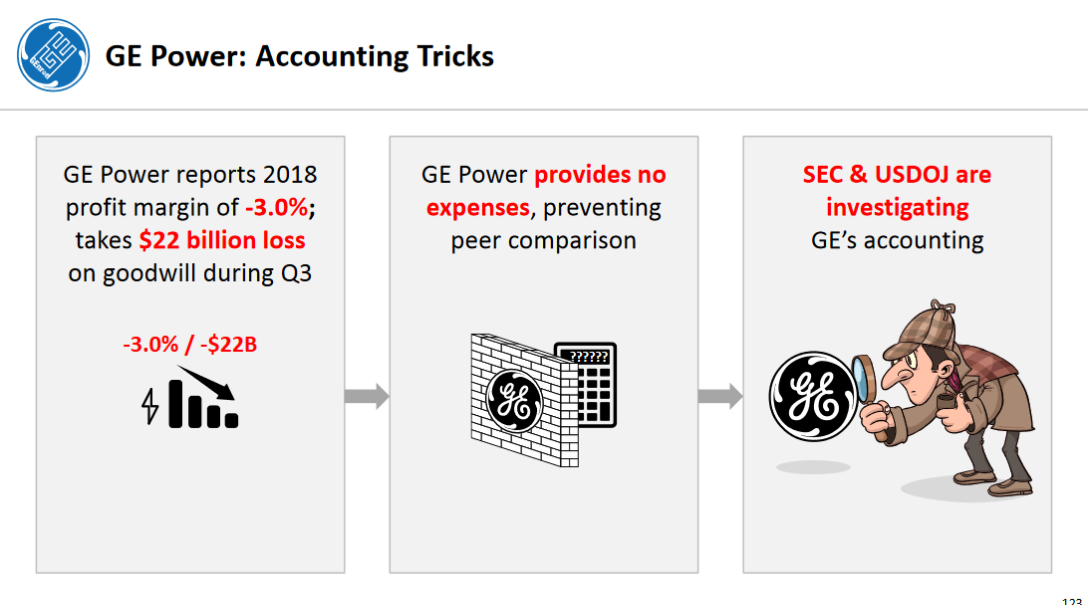 In a normal accounting environment, numbers are not restated from year to year. It is important to be consistent. If a prior year is restated then all the years need to be restated so that they are consistent. But it appears that GE is not following these principles. 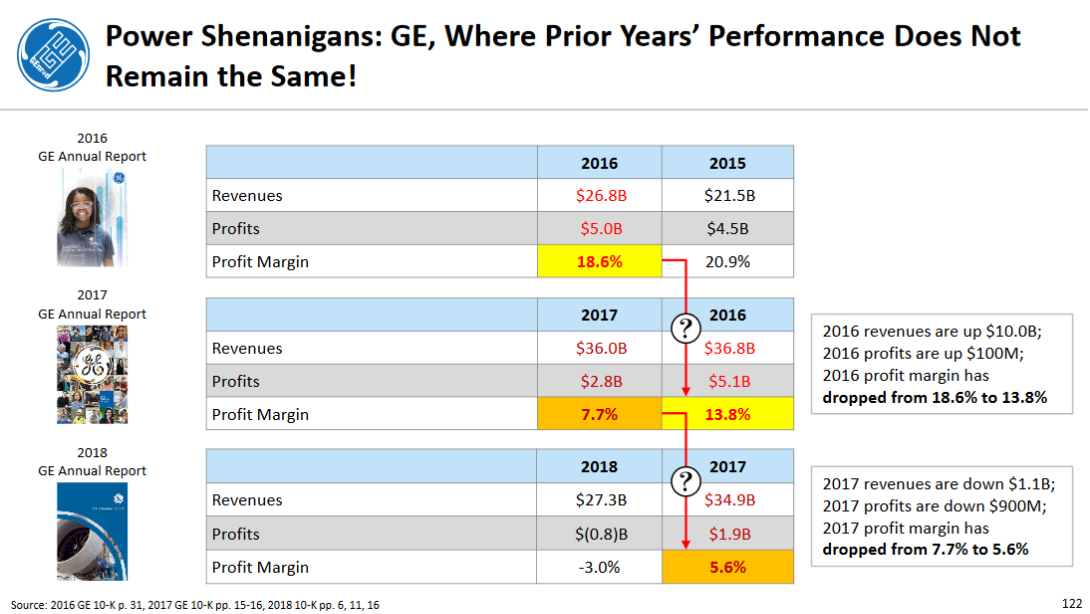 GE Power took a $22 billion loss to Goodwill during the third quarter of 2017. As the above picture shows, during 2016 to 2018, they restated their earnings down by $4,029 billion. This was due to the significant changes in the timing of the principle of revenue recognition. ASU 2014-09 supercedes the GAAP revenue recognition guidance. This was supposed to take place for annual reporting periods after December 15, 2017. However, this changes shows in the 2016 and 2017 consolidated and segment reporting. This resulted in the drop of equity of $8,488 billion.

One of the key indicators of Accounting Fraud is when the year over year annual reports shows Material differences. These changes can be hidden, like GE does, by changing the reporting format every few years to make those year over year comparisons difficult. With GE, notes Mr. Markopolos, their annual reports “are changing more often than the wind”.

The GE Aircraft Engines also has issues that GE tries to hide. In the annual report, the Management Discussion and Analysis (MD&A) only shows the top line of profits and the bottom line of profit margin. They do not highlight the key issues in the middle such as Cost of Goods Sold; (COGS), Selling, General and Administrative Expenses (SGA); Research and Development (R&D) and corporate overhead allocations. Leaving these areas out doesn’t allow for analysts to run comparisons between similar companies.

The GE Aircraft Leasing Division also has its problems. GE Capital Aviation Services (GECAS) is under the umbrella of GE Capital which is what GE LTC was under as well. This is the overall division the writer worked in as a Staff Accountant. This slide from Mr. Markopolos’ report sums up the overall experience there. 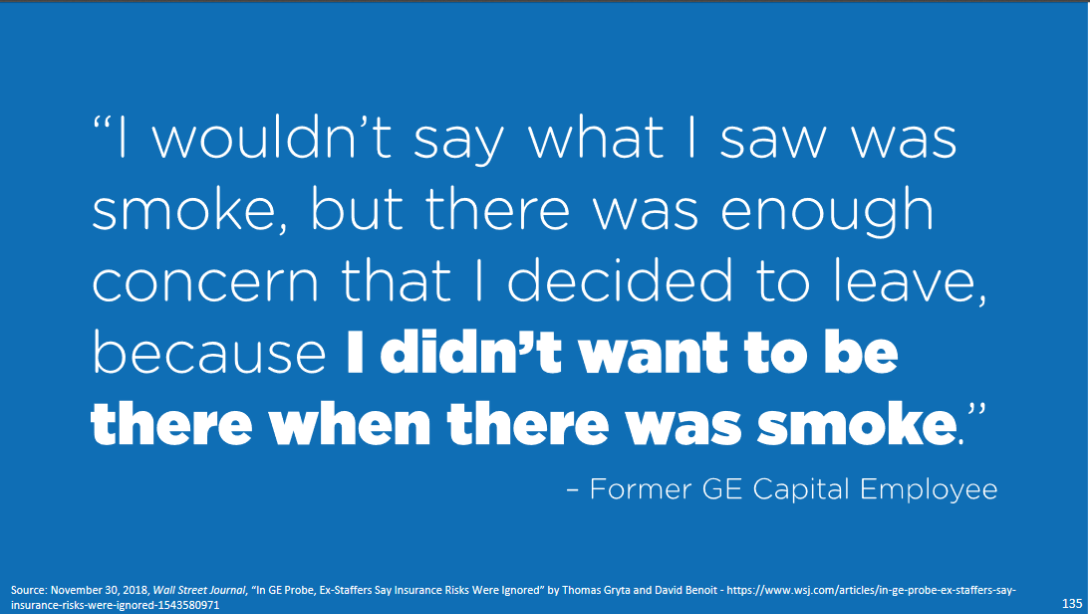 There are many reasons to doubt GECAS Profits.

The first is that  GECAS provides the investors with almost no information other then the fact that they have great earnings. This leads Mr. Markpolos and other investors to guess why this is. They don’t bother to post their profit margins. This could be best guessed that it is because they are probably downsizing and thus has lower year-over-year revenues.  There is no way they can have their reported 24-41% reported profit margins in 2017. If this is to be true, then the most logical explanation is that they must have lots of off-balance-sheet borrowings which effects their BBB+ credit rating.

The second reason to doubt GECAS Profits is that according to their own numbers, the number of the planes that GE owns has gone down while during the same time the number of engines goes up. Is that possible?

In the April 8, 2019 JP Morgan GE Research Report by Stephen Tusa CFA, et al, there are several problems that are noted. GE’s Free Cash Flow (FCF, a way of looking at a cash flow of a business to see what is available for distribution among all securities holders), has a disconnect between that and the EBITDA (Earnings before Income Tax, Depreciation and Amortization) These numbers at GE Power just do not correspond. This is partially due to the relationship between GECAS and the CFM JV (a joint venture between GE aviation & Safran Aircraft). Their relationship holds a lot of, “off-balance sheet mechanisms to deliver better earnings than cash (with the charge likely coming in the interest and other financial charges line). The impact from CFM moving parts is not disclosed, and we have little information about this important JV.” Given the relationship that is not adequately disclosed and the increasing engines without corresponding planes, one begins to think that it has become reasonable to ask more questions.

Starting in 2013, engines owned by GECAS grew at 10% while the aircraft owned went down until fourth quarter 2015. However, no disclosure was provided.

So what is the overall result of all the fraud and incorrect LTC accounting? 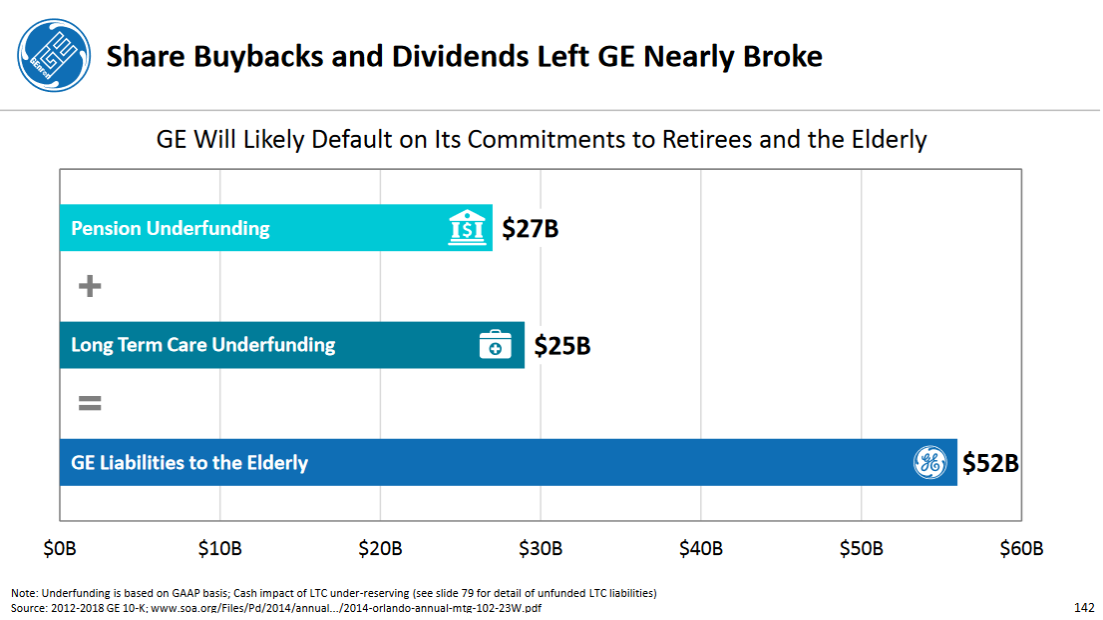 During that same time period, the GE top executives go paid $637 million in compensation. This translates to a -4.25% net income (loss). No bonuses should have been paid during that time frame given that loss. 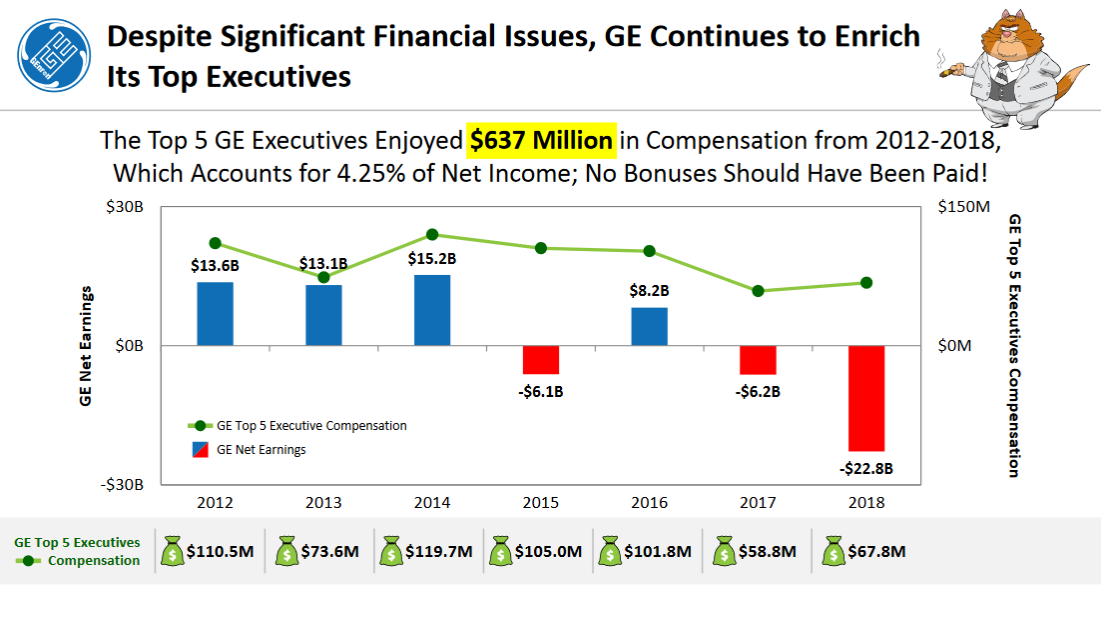 In the fourth installment of this series, we will look how BHGE executives are viewing this news as well as what Goldman Sachs says about GE.