Detroit, MI – Members of the United Auto Workers Union (UAW) rely upon their Union officials to negotiate deals in the best interests of their union brothers and sisters. On August 14, 2019, Michael Grimes, a retired UAW official, joined a growing club of indicted UAW officials facing felony charges, charges of corruption and theft from the very people they were supposed to represent.

Investigations have been underway into allegations of Union officials and the big three U.S. automakers for quite some time. A federal corruption probe netted a 2017 conviction of former Fiat Chrysler Autos (FCA) Vice President Alphons Iacobelli. UAW Vice President Norwood Jewell was also convicted in August of this year, along with several others as a result of a probe into Chrysler Fiat. Investigators say the schemes involved the misuse of money designated for the training of UAW employees but was instead used for personal gain and benefit by corrupt officials. The money was supposed to go to union members for Collective Bargaining Agreements with the automaker. Still, the biggest fish in this pond of scum, former Fiat Chrysler Vice President General Holifield, escaped prosecution when he died in 2015. The investigation estimates that a sum of more than 4.5 million dollars was grafted by the now-dead Holifield and his cohorts. Although Holifield’s widow was prosecuted, she was only convicted of a tax crime.

At the conclusion of Jewell’s trial earlier this month, Federal Investigators warned that the UAW’s former Vice President would not be the last indictment sought, and they held to that promise. All eyes now turn to General Motors (GM), as the first indictment to be unsealed belongs to former senior UAW official Michael Grimes. GM’s Grimes faces felony charges for wire fraud conspiracy and money laundering. 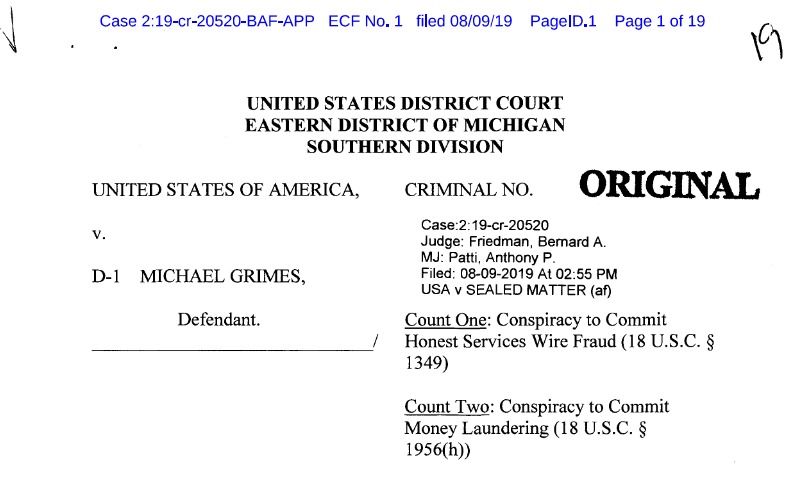 According to the indictment, Grimes and two others not yet named have been accused of accepting bribes and participating in other elaborate kickback schemes that total in the hundreds of thousands of dollars. From cash to mortgages, sham companies to prime real estate Grimes siphoned money to himself in many imaginative ways at the expense of those whose interests he was charged to protect. 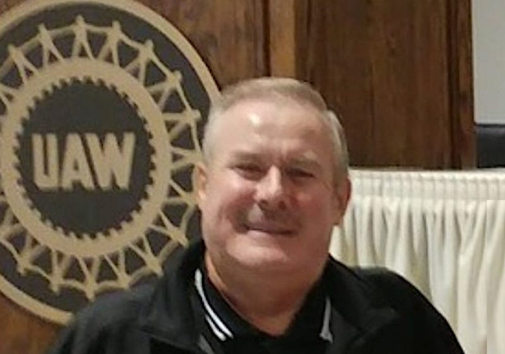 Grimes was a member of the Executive Board for the UAW-GM Center for Human Resources (CHR) whose primary function was to provide training for GM Union employees, a benefit that was included as a part of collective bargaining agreements between the automaker and the union. Instead of using funds set aside for the training, he and the other two unnamed defendants are alleged to have used their positions to leverage kickbacks from vendors who relied upon their relationship with GM and the UAW for their business. 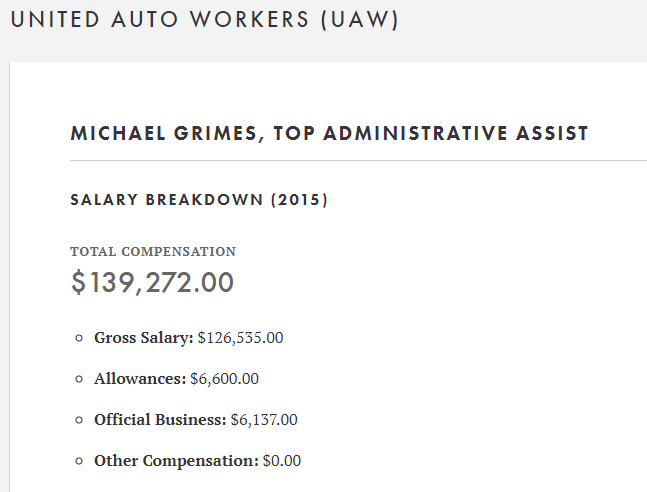 The first vendor, referred to as Vendor A in the indictment, had provided logo branded products to GM employees and maintained retail stores for employees at GM Plants throughout the US. In 2006 this vendor was contracted by CHR and to provide and distribute 23,000 branded wristwatches to one of GM’s powertrain divisions. As the deal got underway, and the vendor’s financial commitments to the project established, Grimes demanded the vendor provide him with a $60,000 loan so that he could purchase a property for himself in Rose Township in Michigan. The vendor refused to do so only to have Grimes threaten to pull the contract for the watches and award it to another vendor. Given the financial stake the vendor had in the project and GM itself, the vendor agreed to provide Grimes with a mortgage so that he could go forward with his purchase of the property. That proved not to be enough for Grimes to keep the awarded contract in place. In the contract to provide the $60,000 loan, there was a sidebar which also established a “consulting agreement” wherein Grimes would receive regular monthly payments of $1,800 from the vendor as a “consultant” for them. In exchange, Grimes would ensure the vendor’s watch contract would remain intact and that their retail outlets would continue to remain in the GM Plants. In addition, Grimes would also utilize his position to secure future business contracts for the vendor.

Grimes would continue to collect monthly payments from the vendor from 2006 (at $1800 per month, eventually increasing to $3800 per month) through his retirement in July of 2018. In order to keep the payments away from prying eyes, Grimes either had the money directed to an unnamed relative or to the fake company he created called “KKG Consulting”. The Indictment notes that between November of 2010 and October 2017 Grimes had netted 27 payments by check totaling almost $900,000.

In 2011, one of the unnamed defendants proposed the purchase of 50,000 jackets with “Team UAW-GM” printed on them to distribute to all employees at the GM Plants. Grimes had just the company to fulfill the order, the very same vendor he had been extorting all along. The vendor had secured the $6 million dollar contract and not long after, Grimes demanded a $300,000 kickback for the two unnamed defendants he worked with. In addition, he also demanded another $525,000 for himself so that he could purchase another property in Fenton, Michigan. Growing weary of this grifting, the vendor attempted to refuse, but Grimes once again threatened to cancel the contract and leave the vendor holding the bag. As a penalty for the initial refusal, Grimes increased his demand to $530,000 and the vendor paid him with a cashier’s check made out to an unnamed relative of Grimes, with which the two purchased the property in Fenton.

In March of 2016, Grimes helped secure another lucrative contract for the vendor, this time for 55,000 branded backpacks worth $5.8 million. Once again Grimes appeared hat in hand this time demanding a kickback of $1 million. The vendor once again refused at first but eventually agreed to pay him $500,000. This time Grimes directed the vendor to pay him with a series of checks made out to “KKG Consulting”  and were included among the 27 checks the indictment noted which were received between 2010 and 2017.

The two yet to be named defendants, known as Union Official 1 and Union Official 2, ran their scam with a different company referred to as Vendor B in the indictment, from which it is alleged that Grimes received kickbacks from as well, though he did not play the more active role in perpetuating this fraud.

In this endeavor in 2010, Union Official 1 had convinced vendor B to loan $250,000 to a construction company owned by someone the Union Official associated with. In 2012, the construction company stopped making loan payments leaving Vendor B at a loss. Around the same time, the Union Official offered a way for the vendor to recoup his losses by suggesting the vendor open a company that could win a contract to supply 50,000 branded watches to UAW employees from which the profits would make up for the prior financial loss of the failed loan. The vendor formed a company in the State of New Jersey and created a website. The vendor then located a manufacturer who could supply 58,000 custom-designed watches for $2,288,200 or about $49 per watch. Union Official 1 even participated in the creation and design of the watches with the vendor. 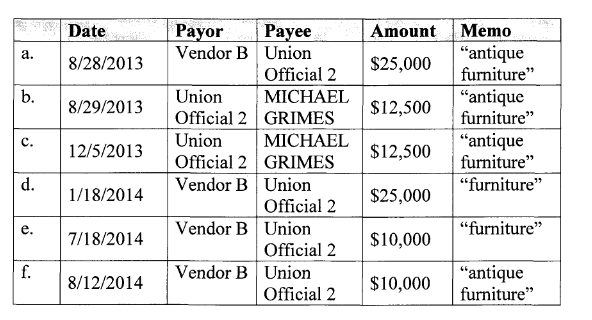 Upon learning of the federal investigation in the fall of 2016 into similar schemes at Fiat Chrysler, Union Official 1 knew the jig was up. He/she went to Vendor B and told them to stop making payments immediately due to the investigation at the other automaker. The watches that were ordered and delivered to CHR remain in a warehouse to this day, never distributed to the employees for whom they were produced.

On August 28, as reported by The Morning Call the FBI and IRS raided the homes of UAW President Gary Jones and retired UAW President Dennis Williams as they continue their investigation into this tangled web of corruption.

The raid on Jones’ home lasted over six hours with one neighbor claiming that he witnessed agents counting wads of cash in the garage. In addition to the homes of both Jones and Williams, the raids also extended to the union’s Black Lake Conference Center where a luxurious cottage was being built for Williams.

On the same day as the raid, Grimes appeared for his arraignment and pleaded not guilty. He is also scheduled to appear in court before Judge Bernard Freeman on September 4, 2019 for a plea hearing in Ann Arbor at 11:30 a.m.

With Union contracts set to expire and Collective Bargaining negotiations set to begin in September, it remains to be seen how this shadow of corruption will be cast over the talks. Union members have been voicing their concern about the negative impact this will all have over their negotiations.

Stay tuned to Patriot’s Soap Box for more on this developing story.