In Part 1 of this series, “GE Long-Term Care Business: A House of Cards That Will Topple The Whole Company, P.I” (read here), Harry Markopolos broke down how the General Electric (GE) Long-Term Care (LTC) will result in a scandal that is larger than Enron and Worldcom combined.

Markopolos details in the second half of his report how GE is actively committing fraud and is insolvent.

The first half, dealing with LTC speaks about how GE may not be a Going Concern anymore. (Going Concern is an Accounting term for the theory that companies will continue to exist from year to year.) 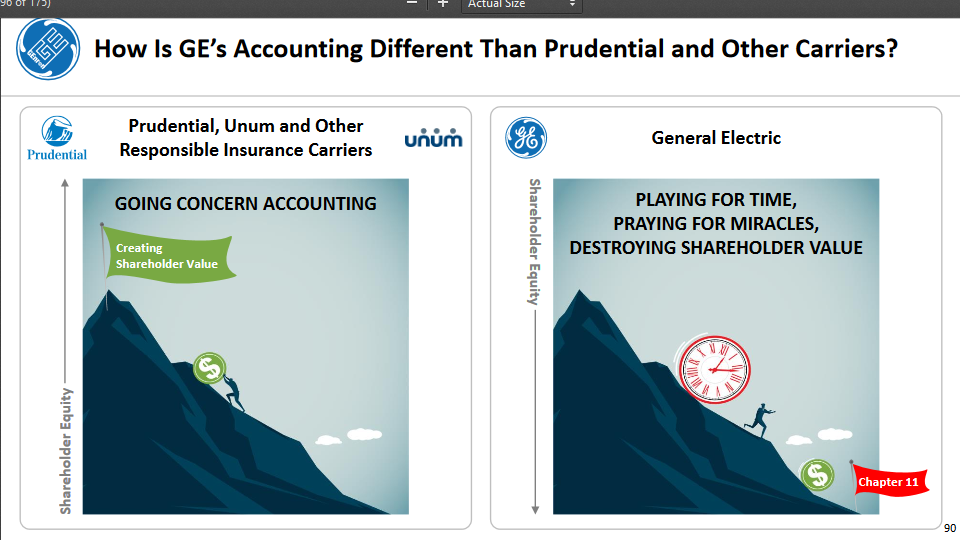 Markopolos states early on in his whistleblower report that Chartered Financial Analysts (CFAs) have wondered how GE can meet or exceed earnings quarter after quarter and year after year. An ex-employee and staff accountant at GE LTC, I fully understand that theory.

The process of ensuring the balances between two accounts are in agreement, known as reconciling, is one of the duties of a staff accountant. Each account on a company’s financial statement or balance sheet must be reconciled. One of the accounts under my purview was a liability account. This account was essentially a slush fund. The entries that would go into this account would be to increase or decrease the balance as needed to meet the income goal for that quarter. The controller of this division was sitting in front of our staff during the quarterly party to celebrate results. As the division president spoke about the earnings, she whispered to us, “It only took us a few minutes to make it”.  This was in reference to the fact that for this quarter, the earnings was too high so an entry had been manually done to decrease earnings and to increase the liability. This was an example personally witnessed as to how the earnings were always right on projection in our division.

The fact that Markopolos found fraud shouldn’t be a surprise to anybody. In 2009, the Securities and Exchange Commission (SEC) caught GE using non-Generally Accepted Accounting Principles (GAAP) on sales of assets in the aviation division and fabricating its numbers. They committed over $3.4 billion in accounting fraud. The shareholders, who paid a hefty price of $50 million in fines, were the only ones that took a hit. In fact, management, KPMG (GE’s auditors since 1909), and the audit committee all kept their jobs.

On July 3, 2017, GE purchased Baker Hughes. Immediately there were concerns in the market as to why GE was purchasing the company. (article here) For the short term, the shareholders of Baker Hughes were the ones reaping the benefits as it would take years for the purchase to help boost GE’s earnings and dividends.

In fact, the opposite happened. Baker Hughes GE (BHGE) has been nothing but a drain on their earnings and has resulted in losses.

GE has committed fraud in relation to the accounting of BHGE, according to Markopolos, by purposefully ignoring GAAP principles.

GE is double counting the impact of BHGE. First BHGE is reporting the $22 billion in its own consolidated financial statements. GE counts these same earnings in its own financial statements. The end result is that income and expenses are doubled, inflating the results and misleading investors. (Consolidated in this context is the process of combining the results of several subsidiary companies into one financial result under the parent company. This is done when a parent owns more than 50% of the shares of that subsidiary.)

GE also continued to consolidate BHGE into its own financial statements even after they announced in 2018 that they expected to sell the company and had made it available for sale. This is important to understand because GAAP rules state that the treatment of the income is accounted for outside the normal operating results of the company itself. (The results should be treated more on the Balance Sheet and Statement of Cash Flows than on the Income Statement.) In the 2018 GE Annual Report, they state that they have “plans to exit our equity ownership positions in BHGE.” Having stated this, consolidation makes less accounting sense to do as they should only be reported at fair market value.

Not only did GE announce that BHGE was available for sale, they implemented plans to sell it. In a March 15, 2019 interview with Bloomberg, GE CEO Larry Culp stated that they had earmarked it for sale and it would be worth around $12 billion. (full article here)

GE also violated another GAAP standard in the filing of its 10-K, required filing with the SEC annually. BHGE stated in its 10-K filing that it was the primary beneficiary of a Variable Interest Entities. (VIE) A VIE is defined as “legal business structure in which an investor has a controlling interest in, despite not having a majority of voting rights.” According to Accounting Standards Codification 810-10-25-38, “Only one reporting entity, if any, is expected to be identified as the primary beneficiary of a VIE”. Since BHGE clearly stated in its 10-K that it was the primary beneficiary, the consolidation is limited to BHGE. This means that GE consolidating BHGE a second time is against two accounting principles.

However, in the 2018 GE Annual Report, they ignore the glaring fact that BHGE is being consolidated twice.

In fact, Financial Accounting Standards Board (FASB) Accounting Standards Codification (ASC) 801-10-25-38A state that “only one reporting entity if any, will have the power to direct the activities of a VIE”.  Because of this standard, only one company can be the beneficiary and report it to the SEC. Ernst & Young in their 2018 Financial Reporting Developments: A Comprehensive Guide, pp 18, 187 states that “if a reporting entity concludes it is the primary beneficiary of an entity, the reporting entity would consolidate the entity.” Thus the fact that BHGE and GE both consolidated it means it is double counted.

This is not a mistake. In the 2018 BHGE Annual Report they state, “Although we hold a minority economic interest in BHGE LLC, we conduct and exercise full control over all its activities, without the approval of any other member. Accordingly, we consolidate the financial results of BHGE LLC.” GE has ignored the substance of the BHGE investment and the corresponding GAAP rules so that they can account for the business as a non-controlling interest so that they do not have to take the $9.1 billion in losses. THIS IS FRAUD.

GAAP does not allow GE to consolidate and it is very clear. 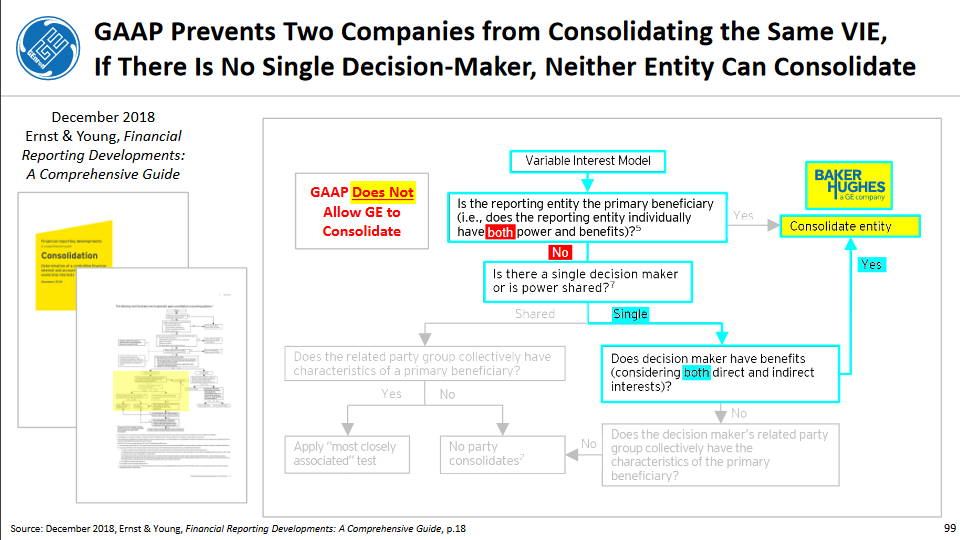 GE must restate its 2018 10-K because of these GAAP violations. They need to correct the $9.1 billion loss on the 12/31/18 financial statements. Ernest & Young, in May 2015, published its EY Center for Board Matters, wherein they stated that, “when an error is material to prior period financial statements, a company is required to restate previously issued financial statements and correct the error.” For GE, that error is growing. Not only was the loss as of 12/31/18 $9.1 billion, the value of the BHGE shares is rising. This means for the time period ending June 30, 2019 the loss is an additional $7.4 billion. The loss as of July 31, 2019 is another $7.2 billion. Combined, the amount of the loss is currently at $23.7 billion.

Markopolos begins to list some questions as to how this 2018 loss of $9.1 billion will impact GE’s business: 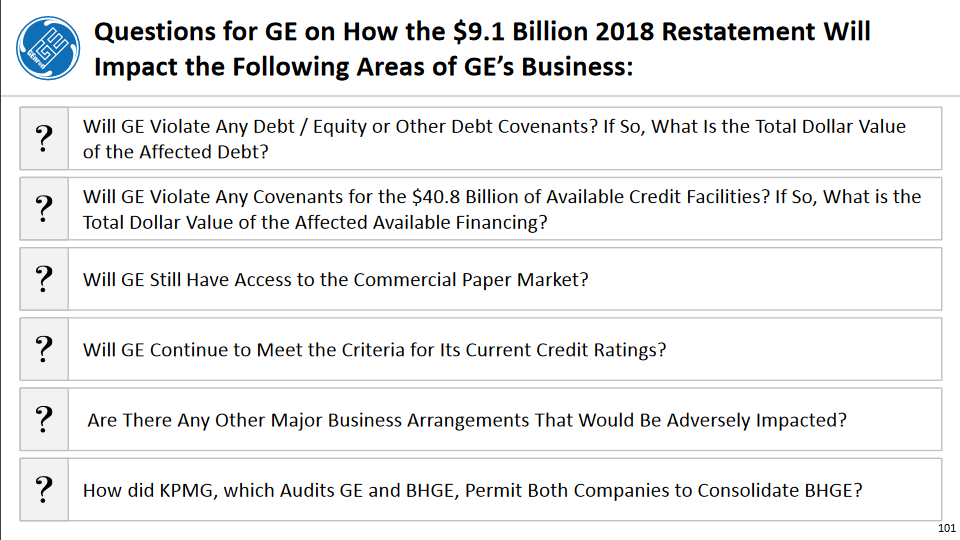 In Part 3 of this series, the rest of Harry Markopolos report detailing how GE is insolvent will be addressed.