November 21, 2019 – More information is starting to come out regarding Ukraine corruption and Burisma Holdings. We have previously reported on Adam Schiff’s connection to Ukrainian oligarch Igor Pasternak and his ‘Taste of Ukraine’ fundraisers. Several Ukrainian MP’s have come forward to demand that President Trump and Zelensky investigate suspicion of US-Ukraine corruption involving $7.4 billion. According to Interfax Ukraine News:

Ukrainian members of parliament have demanded the presidents of Ukraine and the United States, Volodymyr Zelensky and Donald Trump, investigate suspicions of the legalization of $7.4 billion by the ‘family’ of ex-President Viktor Yanukovych through the American investment fund Franklin Templeton Investments, which they said has ties to the U.S. Democratic Party.

At a press conference at the Interfax-Ukraine agency on Wednesday, MP Andriy Derkach announced that deputies have received new materials from investigative journalists about international corruption and the participation of Ukrainian officials in it.

Last week, November 14, the Prosecutor General’s Office (PGO), unnoticed by the media, announced a new suspicion to the notorious owner of Burisma, ex-Ecology Minister Zlochevsky. According to the suspicion, the Yanukovych family is suspected, in particular, with legalizing (laundering) of criminally obtained income through Franklin Templeton Investments, an investment fund carrying out purchases of external government loan bonds totaling $7.4 billion, Derkach said.

With reference to the investigation, he emphasized: it was money criminally obtained by the ‘family’ of Yanukovych and invested in the purchase of Ukrainian debt in 2013-2014.

For his part, MP Oleksandr Dubinsky from the Servant of the People faction said that according to investigators, ‘he Yanukovych ‘family’ illegally obtained $7.4 billion and laundered the funds through an investment fund close to some representatives of the U.S. Democratic Party in the form of external government loan bonds.

Now it has come to light that the law firm representing Fiona Hill and Lt. Col. Vindman also represent Burisma Holdings in what can only be seen as a clear conflict of interest:

Another researcher M3thods on twitter has also discovered a connection to Schiff:

Schiff is connected to both BlackRock and Franklin Templeton Investments, two companies that were named in the $7.4B Burisma/US-Ukraine corruption claim that was announced…https://t.co/enhuAplCUEhttps://t.co/WuEZfwdTGt pic.twitter.com/rzjVyDibGd 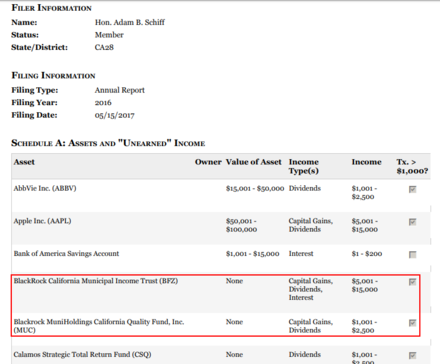 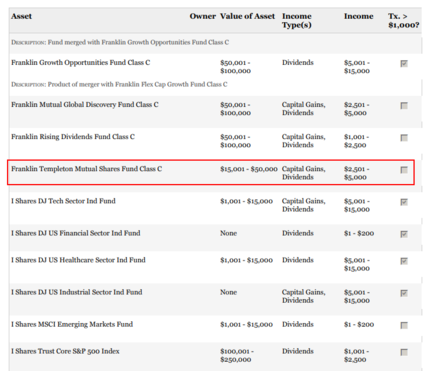 Adam Schiff clearly has financial interests in Ukraine, which could be seen as a potential conflict of interest. It seems more like an attempt to obstruct U.S. Attorney John Durham’s investigation into the origins of the Russia probe and any investigation into Burisma Holdings.

According to Dubinsky, Hunter Biden’s income from Burisma is a ‘link that reveals how money is siphoned [from Ukraine],’ and how Biden is just one link in the chain of Zlochevsky’s money laundering operation which included politicians from the previous Yanukovich administration who continued their schemes under his successor, President Pyotr Poroshenko.

‘We will reveal the information about the financial pyramid scheme that was created in Ukraine and developed by everyone beginning with Yanukovich and later by Poroshenko. This system is still working under the guidance of the current managerial board of the National Bank, ensuring that money flows in the interest of people who stole millions of dollars, took it offshore and bought Ukrainian public bonds turning them into the Ukrainian sovereign debt,’ said Dubinsky, adding that in both cases of Yanukovich and Poroshenko, Ms. Gontareva and companies she controls were investing the stolen funds.

According to Interfax-Ukraine, MP Andriy Derkach announced at the same press conference that deputies have received new materials from investigative journalists alleging that the ‘family’ of ex-President Yanukovych funneled $7.4 billion through American investment firm Franklin Templeton Investments, which they claim have connections to the US Democratic party.

‘Last week, November 14, the Prosecutor General’s Office (PGO), unnoticed by the media, announced a new suspicion to the notorious owner of Burisma, ex-Ecology Minister Zlochevsky. According to the suspicion, the Yanukovych family is suspected, in particular, with legalizing (laundering) of criminally obtained income through Franklin Templeton Investments, an investment fund carrying out purchases of external government loan bonds totaling $7.4 billion,’ said Derkach, adding that the money was criminally obtained and invested in the purchase of Ukrainian debt in 2013 – 2014. – Zero Hedge

As discovered by @SamyD12 on twitter, the Blackrock Board of Directors is home to none other than Cheryl Mills, Hillary Clinton’s personal attorney, who served as her Counsel and Chief of Staff throughout her entire tenure as Secretary of State.