July 6, 2021 – Way back on March 15, 2021 Patriots’ Soapbox filed a FOIA request with the FBI, DOJ & DHS related to the use of federal informants on January 6. We believed that like many other FBI entrapment schemes, the main events on January 6 at the Capitol Building in Washington DC, were possibly instigated at the behest of the FBI. The second part of that FOIA request inquired about third party contractors also present that day on behalf of a federal agency. We filed FOIAs on the Oathkeepers and Stewart Rhodes, in addition to publishing an article back in April of this year questioning whether Rhodes was himself a federal informant like several leaders of the Proud Boys turned out to be. Darren Beatie’s June story in Revolver News subsequently did an excellent expose asking the same thing about the use of federal informants on January 6.

The investigative reporting of Patriots’ Soapbox and Revolver News appears to have been vindicated with today’s major bombshells coming from official court documents in a case against a man named Fi Duong. Documents show that not only were there undercover FBI informants present on January 6, but there were also undercover DC Metropolitan Police Department (MPD) undercovers as well,  both working with the FBI.

The D.C. Metropolitan Police Department had an undercover at Freedom Plaza on the morning of Jan. 6, per court documents.https://t.co/8Sf896zn5E

IF, like the FBI claims there was some “intelligence failure” and they had no idea something bad could happen on January 6, what then was the impetus to have undercover agents on scene? We are supposed to believe they had the foreknowledge to send undercover agents to work with undercover MPD, but they had no advanced knowledge of anything. Really?

So what have we learned from this? Once again, it appears the FBI was more involved than they initially claimed.

The charges against Duong are specific to Jan. 6, but the accompanying FBI affidavit describes what became apparently months of undercover surveillance that tracked Duong as he allegedly collected materials to make Molotov cocktails/explosives pic.twitter.com/cyNg0tKpuj

This sounds very similar to the Antifa groups the media and Democrats routinely carry water for, but here we have it. These disclosures indicate months of undercover work, blowing the FBI narrative of “intelligence failures” out of the water. They knew months in advance that something was going to go down that day. In fact, they warned their other informants like Milo Yiannopoulos not to be there. Milo subsequently broadcast on his social media that he would not be attending that event. Enrique Tarrio, leader of the Proud Boys as well as “prolific” FBI informant was conveniently picked up the day before January 6.

Now we will go into the documents themselves:

This is an interesting admission, especially in light of a very enlightening article by Spencer Ackerman of the Daily Beast:

The FBI, without any court order, sifted through the National Security Agency’s massive troves of foreign communications for information on American ‘racially motivated violent extremists,’ a newly declassified order from the secret surveillance court details.

Even though the Foreign Intelligence Surveillance (FISA) Court warned the FBI in 2018 that its warrant-free queries, known as backdoor searches, were constitutionally alarming, the bureau still conducted queries relevant to criminal investigations about, among other things ‘domestic terrorism involving racially motivated violent extremists.’ The court’s Judge James E. Boasberg found what he referred to as ‘apparent widespread violations of the querying standard.’

That’s the euphemistic term the bureau tends to use to denote white supremacist violence. On one occasion, an FBI analyst ran a multi-search-term ‘batch query’ on Americans ‘in connection with predicated criminal investigations relating to domestic terrorism’ that returned 33 foreign surveillance results.

On at least one occasion, around May 2020, an FBI analyst looked through the foreign NSA troves ‘to vet [a] potential source in [a] predicated criminal investigation relating to public corruption.’ Seven FBI field offices were implicated in ‘these and a number of similar violations,’ according to a November 18, 2020 FISA Court opinion declassified on Monday and signed by Boasberg.

In other words, the FBI continues to perform warrantless searches through the NSA’s most sensitive databases—the ones the NSA is not required to get warrants before filling with communications information—for routine criminal investigations that are supposed to require warrants. – The Daily Beast

Was this FBI agent one of those who violated the Constitutional rights of Americans by using warrantless surveillance searching for so-called “racially motivated violent extremists and domestic terrorists?” If so, as Ackerman points out, this can jeopardize a person’s right to a fair trial. By the way, Duong is not white, nor is he racially motivated.

This appears to conflict with multiple videos showing Capital Police removing barricades and waving people forward, towards the Capital.

Here is the first mention of Metropolitan Police Department Undercover Employees present on January 6. How did they know to be there?

We know that Google is cooperating with the authorities on providing location data, something they did not want to do when it came to the Antifa and BLM riots.

At what point did they first learn about Duong? In a sea of millions of people, how did they know to target and approach him?

So this is a man who fled communism two times already and was terrified by what he perceived to be the same thing happening in America. This is someone who was traumatized clearly and would make a perfect target. 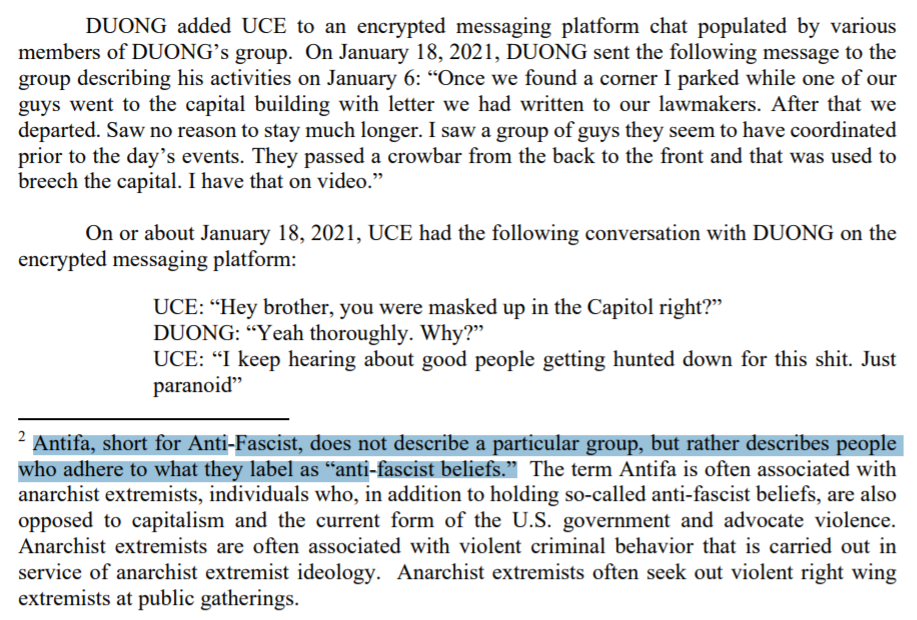 This incredible statement by the FBI, providing cover for Antifa, claiming they are not a “group” is patently absurd. 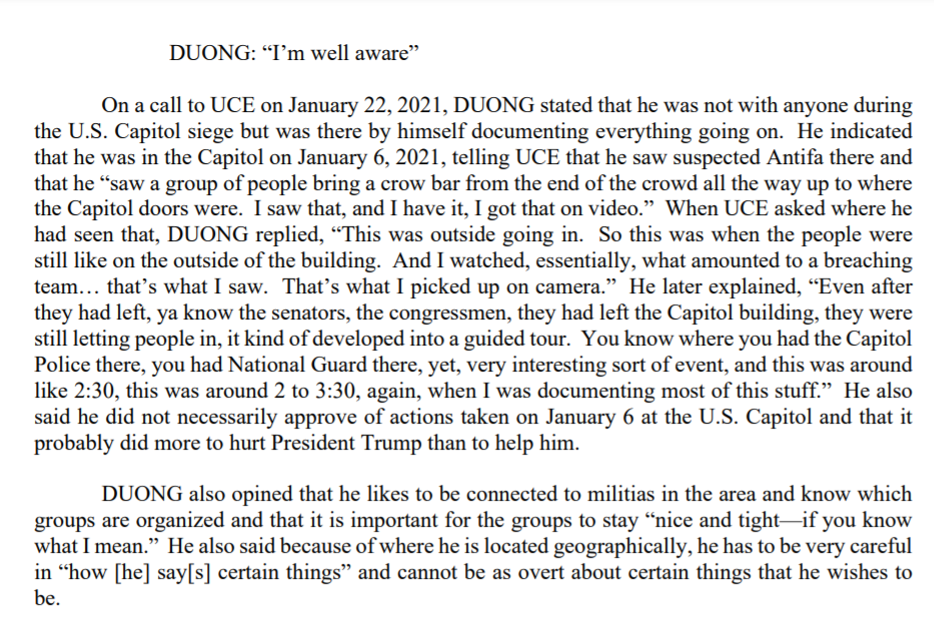 Here according to the undercover agents, Duong claimed to have seen a tactical team breach the capital and that he didn’t agree with their actions and thought it did more to harm President Trump. 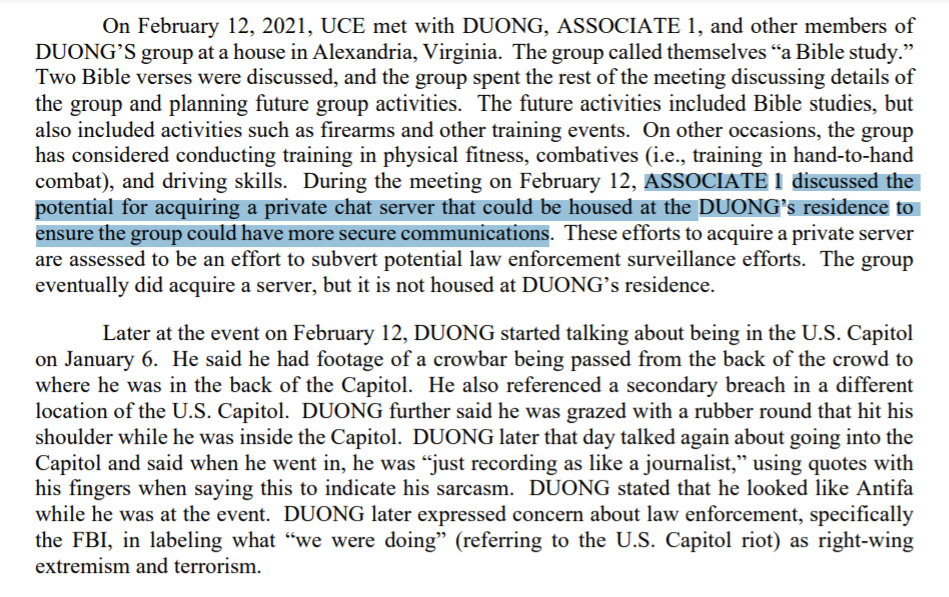 WHO is Associate 1? Why are they not named? Could it be that they are another informant? 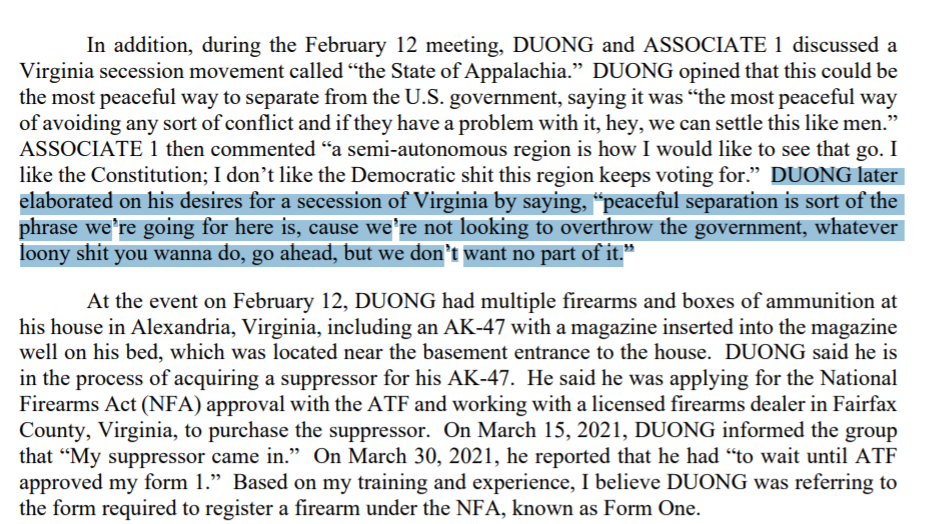 Here Duong appears to advocate for peaceful activity saying he wants no part in any attempt to overthrow the government. 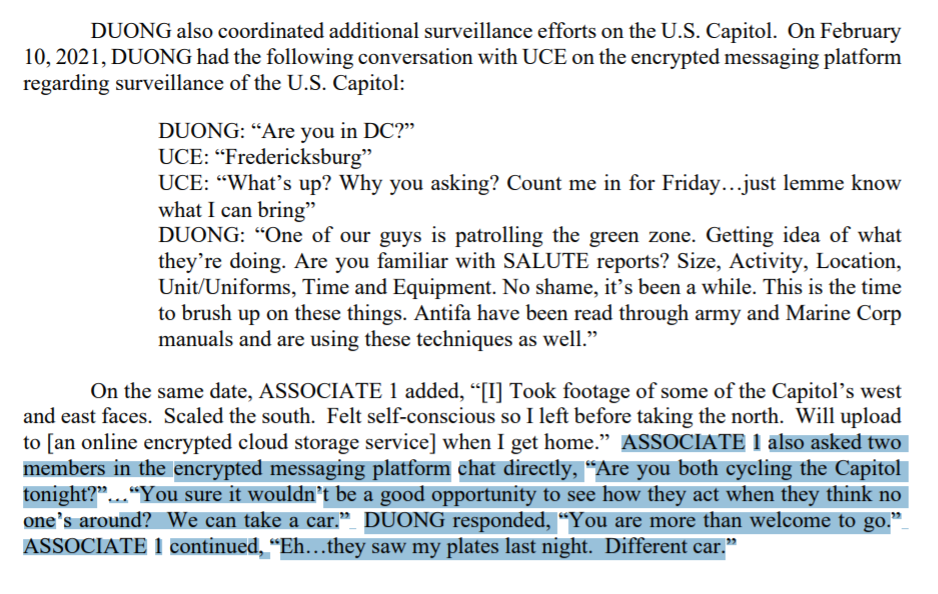 Associate 1 is referenced yet again. 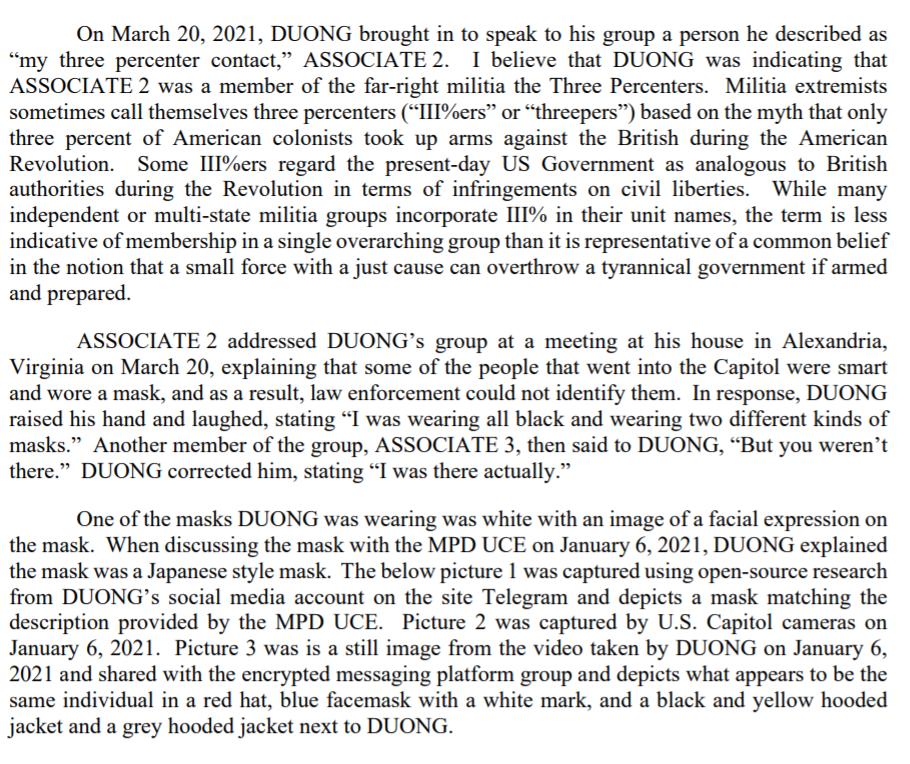 “ASSOCIATE 2” is most likely an FBI informant inside the THREE PERCENTERS militia.

At this point people need to be asking serious questions about the FBI’s use of informants and undercover agents. We also need to know if there were any third party intelligence contractors present that day acting on behalf of a federal agency,  or used in the lead-up to January 6. This information may be more difficult to acquire, since private intelligence contractors can to hide behind the designation as “private companies” and evade FOIA requirements.

Please read the rest of the documents yourself here. There is no way Duong randomly came into contact with an undercover MPD on the 6th. Most likely they had prior knowledge of Duong and his political opinions and targeted him. Questions also remain about the individuals referenced as ASSOCIATE ONE and ASSOCIATE TWO in the charging documents that appear to be confidential informants (CI), one of which is embedded in the Three Percenters.