It looks to be a classic scorcher over the July Fourth holiday weekend, fellow Spectators! Maybe you’re using it as part of your ‘staycation’ due to the Biden gas and other price hikes. Maybe at the nearby lake or familiar seaside. Perhaps a family pool or lawn sprinkler with water gun and water balloon battles in the yard. Maybe just fanning yourselves with a dripping ice cold drink or melty frozen dessert in one hand and a fan in the other under an awning or shade tree swatting at feisty hungry flies. Just keep those grill meats sizzling hot, the various salads cold, the beer on ice and car keys hidden, and the kids and pets away from the fireworks. Last place you want to drag the picnic to is the hospital ER or Urgent Care.

Have a great time, be safe, and remind your younger generation(s) celebrating with us “boomers” how hard-faught our independence and freedom were won from one tyrant, and how sinful it will be to surrender it to another. The revolution continues within. 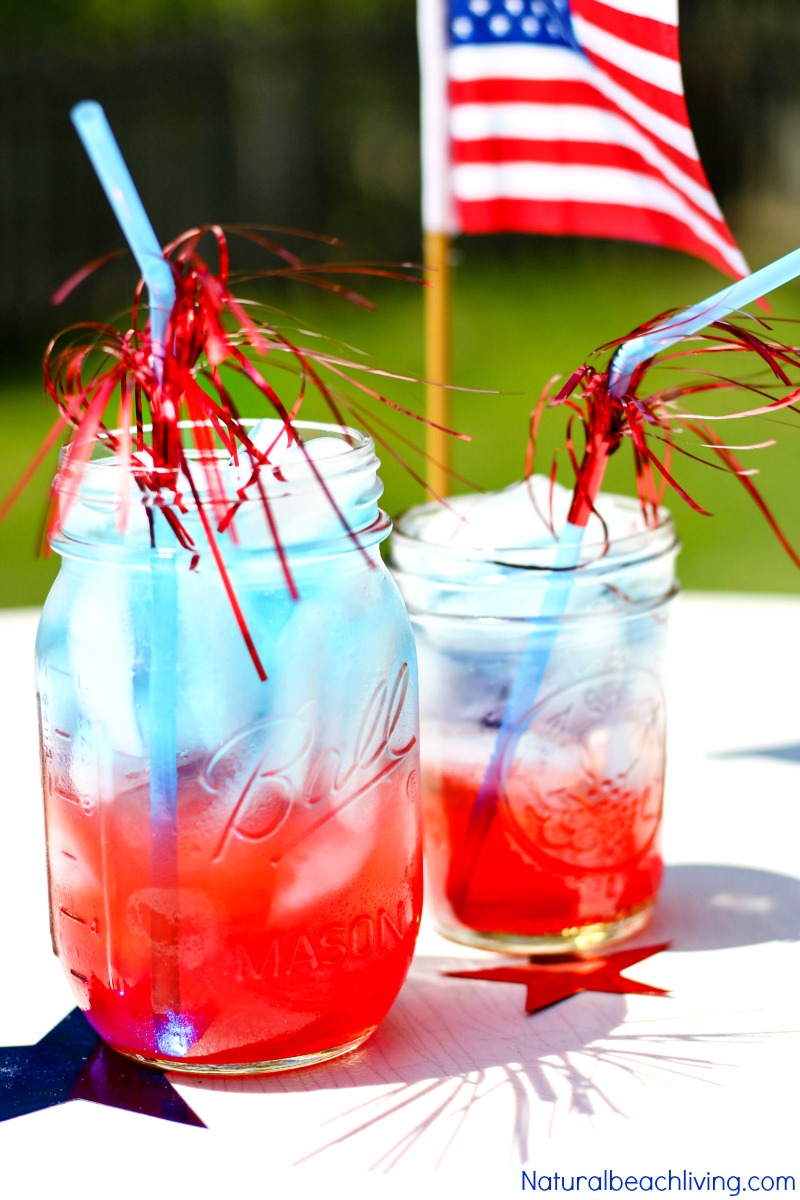 Victoria Balara: PROUD TO BE AN AMERICAN? – Poll reveals which political party is most patriotic — and shows national pride has seen big drop off Fox News Poll: Pride in US down significantly: The percentage of people who are proud of their country is down 12 points from 2017 and down 30 points from 2011 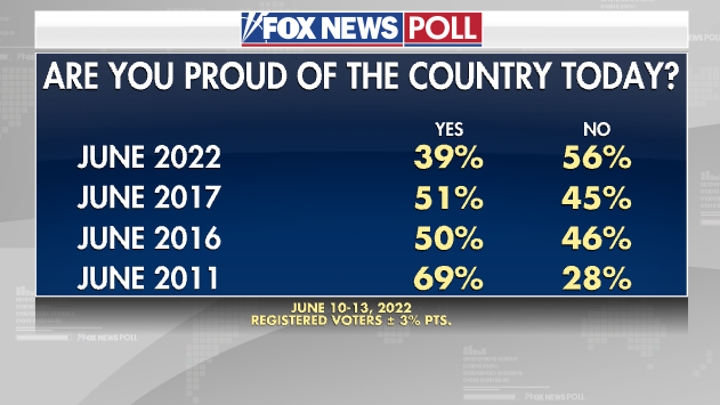 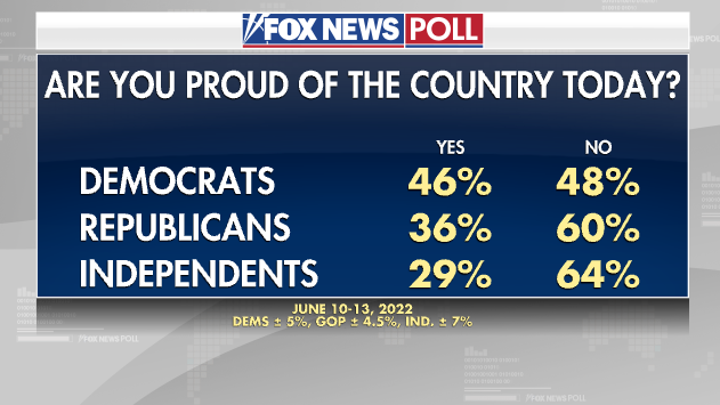 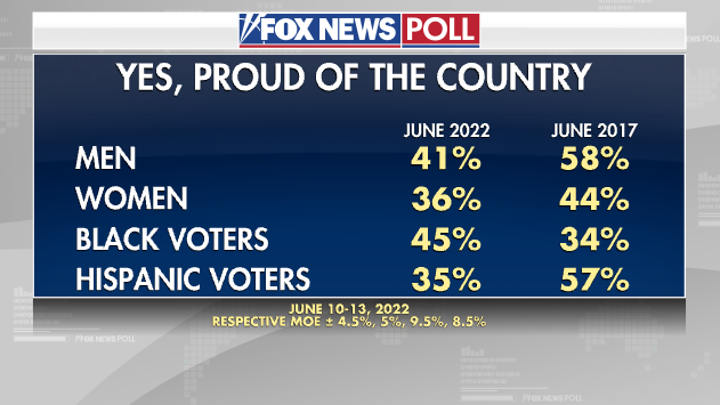 VIDEO: Campos-Duffy on Biden’s America: ‘Everything is worse’

This July Fourth our basic Bill of Rights are under the most attack than ever before and I think this is where people of either political persuasion are currently alarmed. When the SCOTUS has to point out not just to the masses but to the ‘Legislative Branch’ of our federal government to do their own damn jobs and stop using the nation’s top court to ‘write law’ not interpret law according to the US Constitution, you know ‘democracy’ is indeed in danger of becoming what the left aims it to become. A lot more people are finally waking up to that fact after all these decades of them using the courts for their activist intentions.

Victor Davis Hanson: The Cry-Baby Leftist Mind: How odd that leftists are destroying the very customs and traditions whose loss will come back to haunt them when Democrats lose the Congress in November.

Rachel Campos-Duffy: A Tejana ‘Queen’ shows Pelosi and America that Hispanics won’t be pushed around anymore: Rep. Mayra Flores’ daughter signaled to Speaker Pelosi and all Americans that Hispanics will not be cowed by the powerful

Tom Joyce: People are waking up to the reality of gender: The public is more likely to support the biological perspective of sex and gender than the alternative.

Eddie Scarry: Democrats loved COVID pandemic and they wanted you to love it, too: Liberals had success with COVID by doing what they do best—spreading misery

Lloyd Billingsley: ‘There’s Going to be Another Pandemic’: Once again, it’s all about money and power.

What would the Fourth of July be without a Brit?

SCOTUS: Hey Congress, how about you make some laws instead of dumping every important decision in our laps?

CONGRESS: Clearly this is the end of democracy

Weird how people think the constitution and the bill of rights can be determined by their feelings.

All the cultural leaders of the West have 3 things in common:

2. No connection to how regular people live.

3. An ironclad belief they are of a higher class and should rule as kings and queens.

I don’t believe gun confiscation would ever work.

I do believe there are some solutions to our gun violence problem, but we’re looking in all the wrong places. 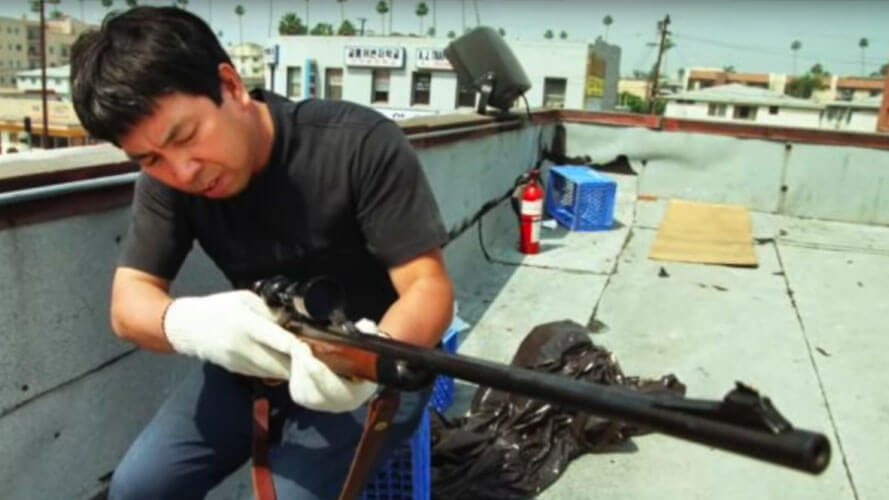 Riots have occurred throughout this nation’s history; authorities have had little power to curb the damage. From the Boston Massacre to Detroit to Los Angeles and now Minneapolis, the destruction has been enormous.

During the LA Riots of 1992, Koreatown was targeted for mass looting and destruction. The LAPD completely failed to protect these people, reportedly fleeing when looters began to shoot at business owners and residents. As the Korean-Americans put it, “They (the LAPD) left us to burn.” Over two thousand stores were looted or burned – nearly half of the property damage caused by the riot – and images of Koreans arming themselves to defend their lives and their livelihoods remain etched a painful chapter of our nation’s history books.

Incredibly, some people are now trying to tie the “Rooftop Koreans” to racism. Supposedly, they’re a symbol for people who just want to kill minorities. If so, I haven’t seen that, but more importantly, it has no basis in fact: the Rooftop Koreans never actually killed any black people in Koreatown. They went out of their way to scare looters off instead of kill them.

But what I have seen is that people across the country are realizing that the police have abjectly failed to protect their communities even as they lash out violently against journalists and bystanders. After all, the police are there to keep order; they don’t have to protect you.

The Supreme Court said as much in Castle Rock v. Gonzales when it told a woman who’d asked the police to protect her children from their violent father that the police didn’t have to enforce a protective order. While this may have been an interesting jurisprudential discussion for the Justices over their differences on the Fourteenth Amendment, it has had real-world impacts. The cops know they don’t have to protect you. They couldn’t even if they wanted to. And thanks to qualified immunity, it’s incredibly hard to win in court against police officers who abuse their powers.

That leaves desperate Americans of all races who seek to protect their businesses and their homes with one solution: to defend themselves…

Serious question, “Have YOU noticed?”

More than once, Joe Biden has brought up interracial couples and the most recent was the beginning of June when the gaffe master went on Jimmy Kimmel’s late night TV show and after babbling his premise they had to hurry to get him out of anything else by going to commercial break…

It was the following day Twitter drenched the bumbling fool in example after example of the growing TV ads with interracial couples and families. The link below was written in February but doesn’t say what year. Marley mentions Biden brought up the subject in one of the presidential debates, so, I think this blog post was obviously written long before Brandon’s June 9, 2022 appearance on Kimmel. However, safe to say ‘interracial’ depictions are something very strong on old Joe’s mega-addled brain.

Marley K.: There’s A Reason We’re Seeing So Many Interracial Couples On Television. And it’s not as innocent as you think.

America Has An Informal Agenda To Whiten America.

A lot of African American Black people have been noticing the uptick of interracial couples in television ads. It’s not that interracial couples are problematic, to each his/her/their own, the problem is that there appears to be an intentional push for Black people to be in relationships with anyone except Black people. The number of advertisements doesn’t align with the percentage of people in interracial marriages in the U.S or the people we see in our daily lives in biracial relationships so it’s quite noticeable.

A message was being transmitted, so I decided to pay attention more. With the New World Order in full effect and the Great Reset upon us, I was wondering if this push was innocent or if it had anything to do with further erasing people of African descent from the globe by encouraging interracial relationships and marriages. It would also aid in the United Nation’s Replacement Migration efforts. Replacement migration refers to the international migration that a country would need to offset population decline and population aging resulting from low fertility and mortality rates. The United States is considered to be a low-fertility country although the only folks not producing children it would seem are White folks, hence the effort for Black people to partner with Whites with non-Whites to produce children.

It’s getting hard not to notice the interracial couples and families in TV ads today. One night I counted it 2-1 on the channel I was watching, with gay couples in a commercial’s mix at a lower percentage. I would love to have a conversation with Marley K. about this. We are pretty much on the same page that it is intentional. However, where we differ is which race is being targeted here. Given all the “white patriarchy”, “white supremacist” and “white privilege” screaming the left has been doing for several years now, and very loudly most recently, one could make a debate-worthy argument that it is the white race the #WOKE TV ad messengers on Madison Ave. are looking to phase out, for lack of a better way of putting it. As I said, other than our idea as to which race is being targeted, Marley K. is spot-on and I agree with her on her analysis 100%. Have a read.

Full disclosure, I do have family members in interracial marriages, so, I ain’t biting on Mad Ave’s rotten bait.

F*ck the Fourth. See you at Reid Park. pic.twitter.com/opsStTQ1SZ

This is an official verified page of @TheDemocrats .

When people show you who they are, believe them the first time.

Democrats hate the 4th of July and they hate everything America stands for. https://t.co/pXuNFNun8n