LIVE NOW
For The Republic: with Alan Meyers

April 2, 2021 – YouTube celebrity and influencer James Charles, whose channel was promoted and boosted by YouTube has been exposed as a sexual predator. The channel was actually given a boost by the CEO of YouTube, Susan Wojicki who claimed it was one of her favorite channels. She even went so far as to hang out with James Charles, who has now been exposed as a child sexual predator.

Here is a higher resolution image, so you can see the two sipping Starbucks drinks and smiling into the camera. 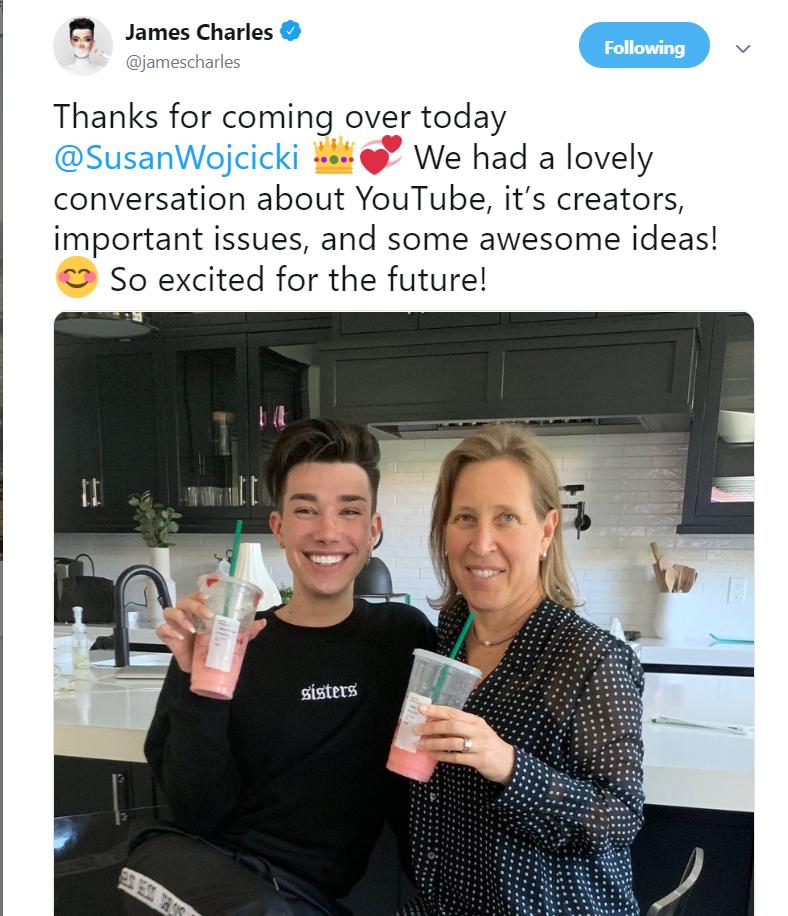 My question to Susan is, will she come forward, make a statement about her friendship with this child predator, and pledge to remove his channel from YouTube so that more children aren’t victimized?

Snaps allegedly sent by James Charles. In one Snap, James allegedly said “Do you shave your body?” pic.twitter.com/WO6VdtEkBZ

What disgusts me about this is that James Charles appears to be marketing a lot of his content towards children and families.

Posts like these are not mistakes, or anything that could be perceived as an “accident.” James Charles has done this to several minor boys including boys as young as 14 years old.

In a bizarre, 14-minute long narcissistic rant, Charles admits to grooming young boys but then blames the victims claiming they “lied about their age.” A quick look at the boys’ social media pages makes it obvious that they were teenagers, and in some cases their ages were even posted publicly.

This extremely insincere video seems to be him just rambling about himself and his own “desperation,” while not taking any real responsibility for his actions. Victim blaming is disgusting. As a society, we tend to view male victims of sexual harassment with less respect and empathy and their stories seem to be largely ignored by the media.

YouTube allowed James Charles to amass 25.7 million subscribers, the CEO gave him personal attention and promotion and he has many brand deals, including with Kylie Jenner, none of which has come forward to condemn his actions or sever business ties with him.

James Charles sends sexual text messages & nudes to minors repeatedly & yet he’s still allowed a platform mainly comprised of minors & brand sponsorships with @MorpheBrushes, etc. Had he been straight & sending these to minor girls he would be gone. Stop the double standards. 😡 https://t.co/g9Fo8HWQaR

On the screen shots you can read the text he was sending to minor boys.

Another minor presents screenshots of DMs with James Charles which once again reveal his pattern of behaviour. When James realizes screenshots were taken, he appears to get super aggressive, accuses him of lying about his age and blocks him. pic.twitter.com/cXfNHUDsaD

This is another boy that was groomed by James Charles, and he very clearly is a minor. There is no way that James didn’t know this was a child.

Here is a picture of another minor that Charles was grooming, who once again is very clearly underage. In one message he told a boy “go to the bathroom where your family can’t walk in …” which is another indication he knew he was conversing with minor children.

The fact that this guy still has a YouTube channel and hasn’t been banned, as we at Patriots’ Soapbox have been, is very telling regarding YouTube’s priorities.

Other YouTubers who were caught sexually grooming minors have gone to prison, a fact that begs the question, where are the police? Is James Charles currently under investigation? Will he be interviewed by law enforcement?

In an earlier interview, James Charles has admitted he was attracted to young boys, and even discussed flying them out to his home.

There likely are more victims who have yet to come forward out of fear or concern for their safety. I encourage them to come forward to the appropriate authorities. It is important that victims speak up so that he cannot continue to do this to other unwitting minor boys.

YouTube’s CEO needs to issue a statement and explain her friendship with this man, what she knew and when she knew it. Then YouTube needs to explain what it’s going to do to handle the situation and keep child sexual predators off their platform.

This story is still developing. We will update, as more information becomes available.