June 5, 2020 – Arguably one of the most important and consequential Information Officers of the 21st century – Lt. Gen. Michael T. Flynn (Ret.) – has delivered an important message to the American people in the form of a letter.

Posted by Scott Kesterson of the Bards of War podcast:

A letter from @GenFlynn.

Here is the full size letter: 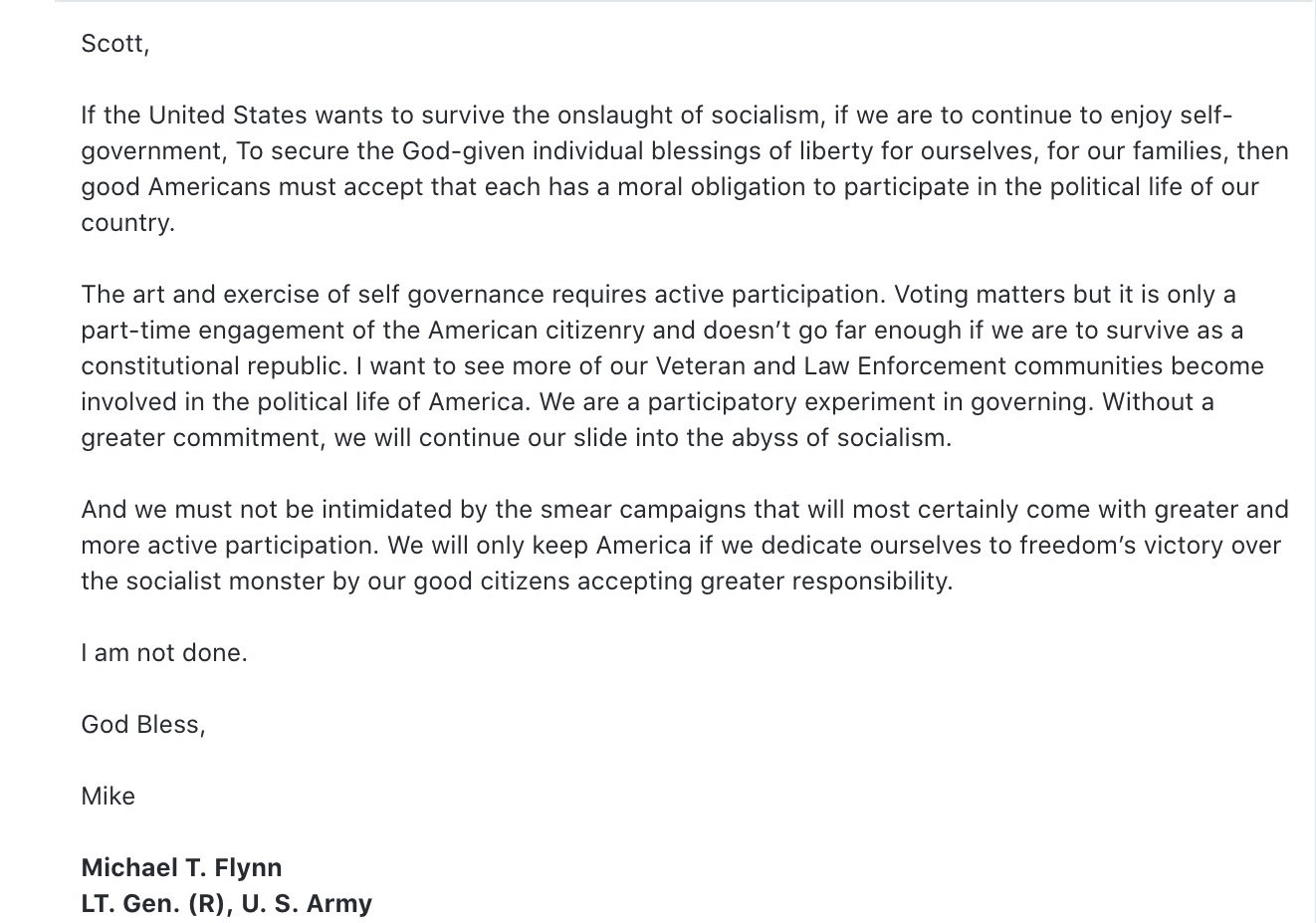 This is a very important letter, especially the timing of this letter. We recently saw several former military generals openly break with President Trump over what may be a socialist coup given cover by the media.

We are seeing “protests” in certain pockets of the country, with rioting and looting causing over 17 deaths, and untold numbers of injuries and destruction. We have seen the media encourage mutiny and attempt to sow discord and division within the ranks of our own U.S. Military. This has the appearance of a George Soros color revolution, CIA-backed regime change coup. This could very well morph into a full blown insurrection, leaving us vulnerable to foreign attack at a time China is preparing for war.

We Must Dedicate Ourselves to "Freedom's Victory over the Socialist Monster" – General Flynn Releases Important Message, Signals He Is Ready to Get Back into the Fight https://t.co/9OUg2na95f via @gatewaypundit

Freedom is not something that is guaranteed. It must be fought for and maintained. It must be protected against all enemies, foreign and domestic. 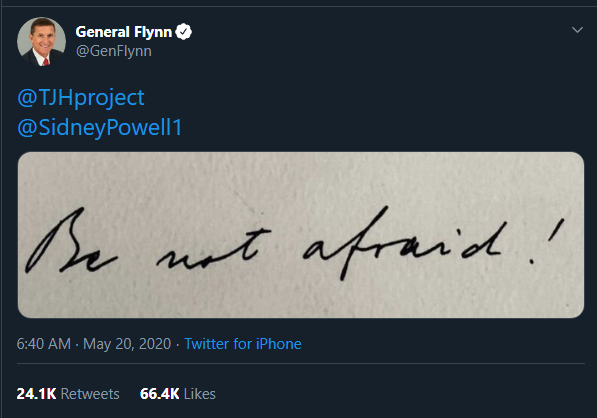 Genera Flynn tweeted the inspiring words of wisdom “be not afraid” back on May 20, 2020.

“This letter means that Lt. Gen. Flynn has not given up on the country and neither should you," a close friend of Flynn's said.#FREEFLYNNhttps://t.co/aUgWgjVZr7 via @SaraCarterDC

The General wanted to remind us that not everyone in the military, or even former military are siding with the socialists. This means that the fight to maintain this Republic is not yet over.

“Mad Dog” speaking out and now McChrystal is using tax-payer assets to compromise our election- that’s dangerously close to, if not actual, Treason.

Who is compromising our warriors?https://t.co/CN1ANReef0

These generals may have their own reasons and personal agendas for coming out against President Trump. There are financial motivations certainly and for some, a pattern of attacking their last Commander-in-Chief.

CNN person w/ direct knowledge: @andersoncooper has been planning a town hall for months w/ Gary Cohn, Jim Mattis, John Kelly & McMaster to air in September. They will make stuff up & say that Trump is unfit for office. Mattis & Kelly signed on. Cohn & HR on the fence. 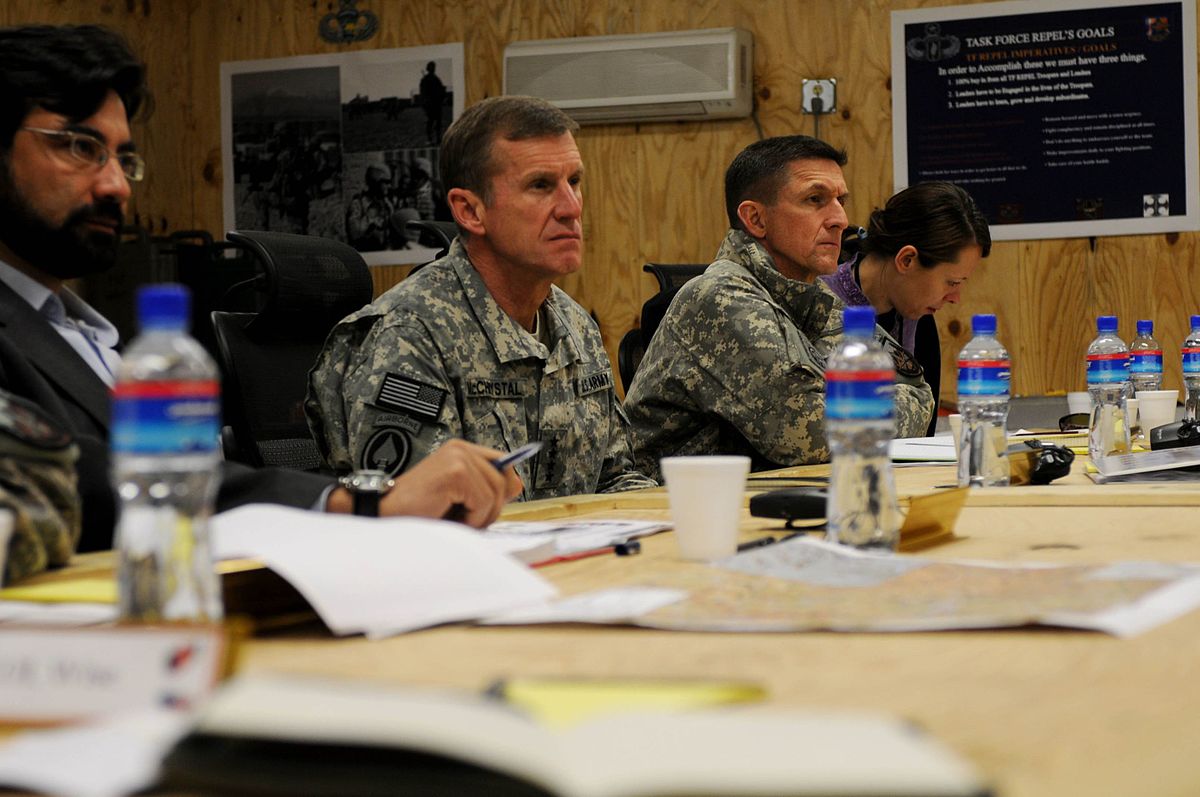 Dubbed the “Runaway General” by investigative journalist Michael Hastings back in 2012, General Stanley McChrystal clearly had a pattern of insubordination.

Why isn’t anyone asking Jim Mattis about the Theranos fraud that he profited from & helped facilitate? And the $10 billion no-bid DoD contract that he tried to steer to his corrupt friends at Amazon?

We don’t know if James Mattis was involved in fraudulent activities during his tenure at Theranos, but it certainly is not beyond the realm of possibility.

Wrong!  These ex-generals are way out of line. They’re trying to influence the outcome of the election.  And Trump is upholding the Constitution while the Democrats are undermine it.https://t.co/rdUvoMMFXM

Even Mark Levin, the “Great One,” has noticed these former generals are out of line.

Former White House chief of staff Gen John Kelly says he agrees with former Defense Secretary Gen. Jim Mattis' warning that Trump is "the first president in my lifetime who does not try to unite the American people" https://t.co/f5t74ZI0RY

This interview today with John Kelly was very disturbing. He appears to be trying to set President Trump up for a potential 25th Amendment “removal” from office, aka a coup. 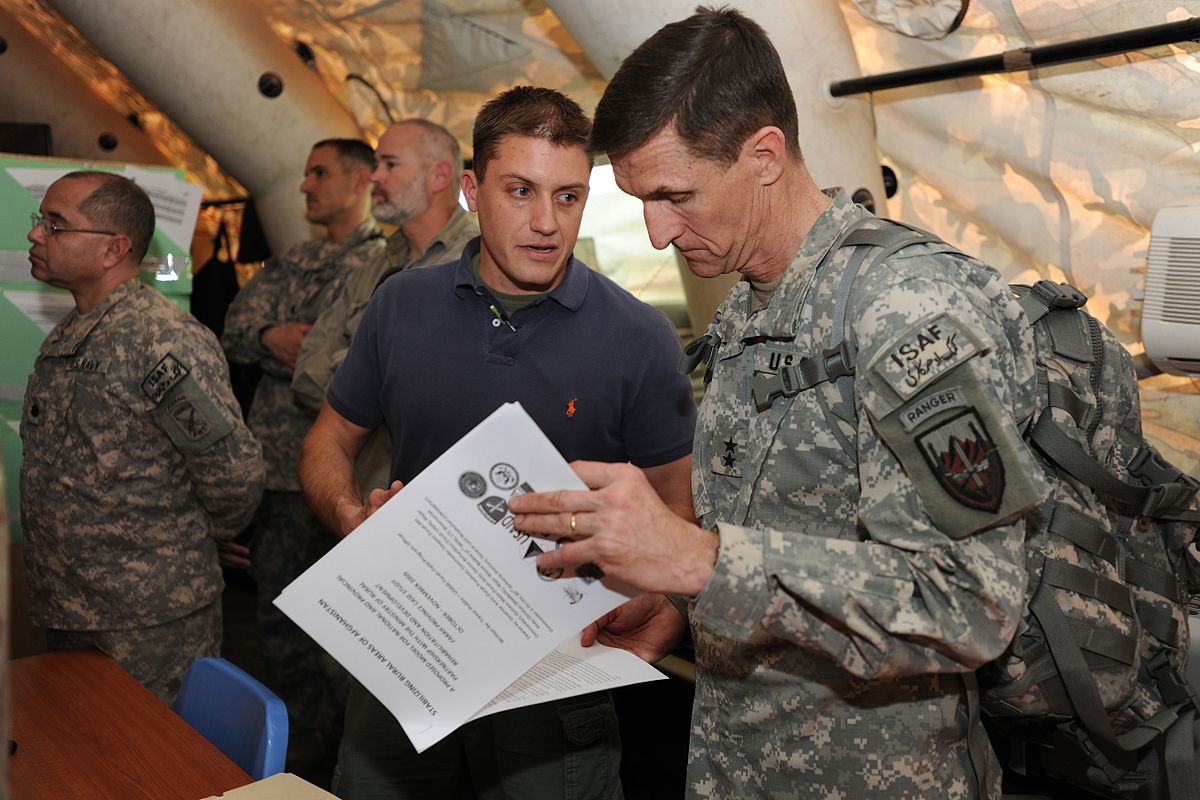 Members of the U.S. Military may be under extreme peer pressure right now to support the ongoing “protests” but that goes against their duty to the Commander-in-Chief.

Are these some of the “3.4 million social media influencers” the Washington Post reporters former Gen Stan McChrystal and Defeat Disinfo are using in their information warfare campaign?

Is Stanley McChrystal behind these seemingly “organic” riots, working together with people like George Soros?

“There's a debate in military circles about whether McChrystal or his friend and successor, Adm. William McRaven deserve credit for JSOC's resurgence; but Ambinder's reporting suggests Flynn is the real father of the modern JSOC.”

Did they take the credit for the hard work of General Flynn?

LTG Michael Flynn(patriot of the highest order) “KNOWS WHERE ALL THE BODIES ARE BURIED.” Does he know something about the UBL raid that helped secure BHO re-election? Does he know where THAT body is buried?

But make no mistake. These operators Q refers 2 and who are at POTUS’ side at all times right now are the most lethal, highly trained soldiers on earth in EVERY aspect of warfare including espionage. They are a special mission unit known unofficially as Delta Force or “The Unit.”

General Flynn was trying to get the Intelligence Community to be transparent.

I believe when Q says WE ARE SAFE, I believe this is why. Do you research on them. It’s rumored that even Seal Team 6 is kinda jealous of how good these guys are too 😎Listen to Schumer yesterday say some of the military men on the ground won’t identify themselves.

Sorry if that’s hard to follow I’m not great at writing threads. My thoughts get jumbled together sometimes 😂

This is definitely an interesting possibility. It seems like they are trying to weaken White House physical defenses, with the DC mayor trying to remove all Federal officers.

Longer version of Lara Logan report about the domestic use of military #psyops techniques against a sitting United States president, @realDonaldTrump.https://t.co/jPvqOXA9wY #G8M

Are the Democrats using psychological operations and special operations warfare methods against a sitting U.S. president, employing groups like ANTIFA who coordinate with our enemies like ISIS?

These techniques also would include targeting innocent American citizens, going after prominent “pro Trump” accounts and individuals. Essentially that would be declaring war on the American people, and hiring former military brass to conduct the operations.

I believe the Democrats have declared war on Law Enforcement, and anyone else who will not bow down and kiss the Socialist ring. I believe they are attempting a coup against a duly elected President, and I believe they are intent on imposing their ideology upon us. We see the global coordination of their riots and looting, and the attacks on U.S. Embassies by ANTIFA in Greece. They appear to be attempting to foment a civil war, or race war, which would make America vulnerable to attacks from our enemies. 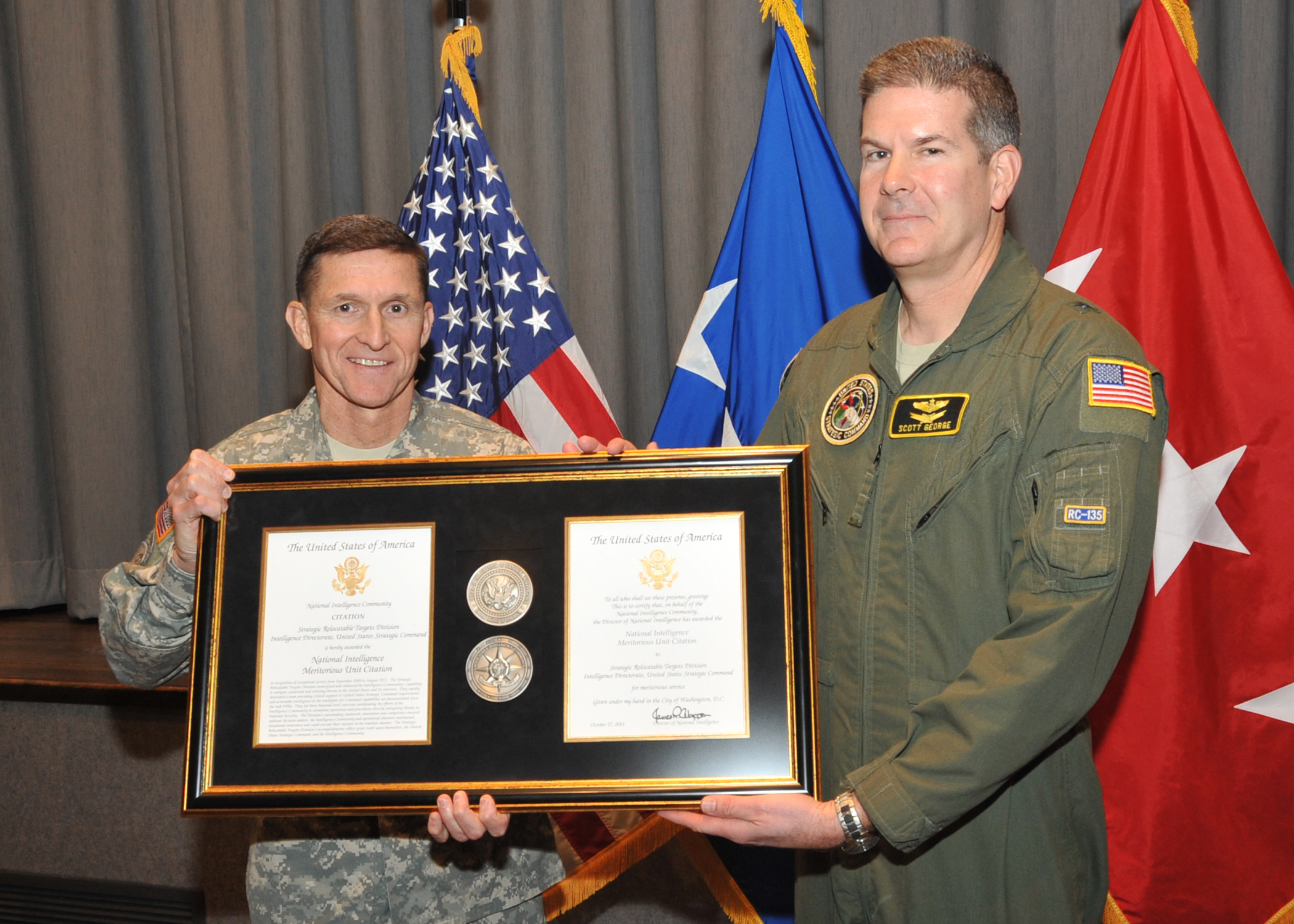 It takes tremendous courage to take a strong stand as General Flynn has for our Nation, and our way of life. It was precisely for this moral stance of honor, integrity and decency that he earned the ire of the Obama regime. His stand has cost him everything. He has stood up not just against the Intelligence Community aparatus, the Washington Establishment and Military Industrial Complex. He has stood against colleagues, close personal friends, powerful people. This cost him many work opportunities and unrecoverable time, in addition to everything else. The sham legal case against him, has cost him dearly and it continues.

America’s General, the People’s General seems to be signaling to us that he is still in the game. He has not given up — not on We The People, not on this Nation. And perhaps he will be back sooner than you think. Until that day comes, continue to keep the General in your prayers. 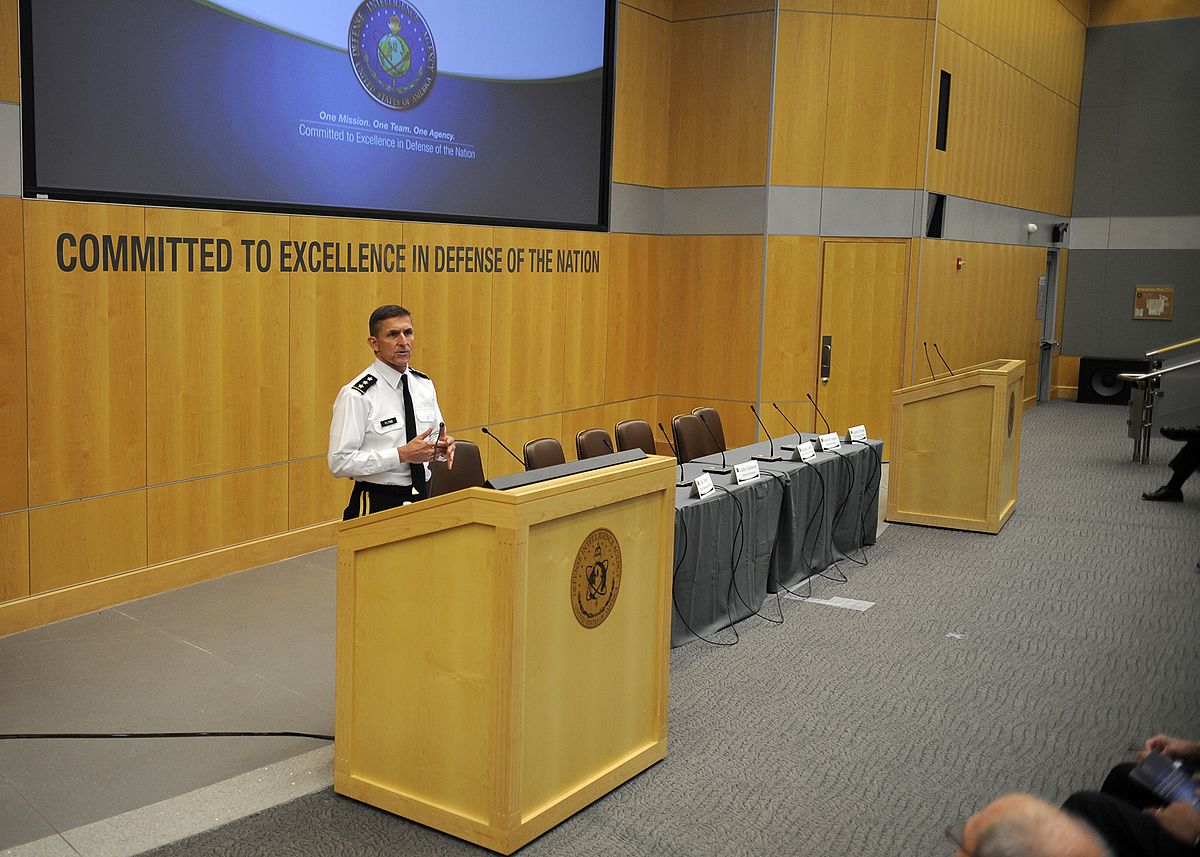 so, this is a very long Story, it’s like a book. How do you create a book? There is a beginning, a middle, and an end. Even if you don’t have the end you have to introduce or allude to the ending in the beginning. What is the point of this story? What are you trying to accomplish. I have… Read more »