Jesus! I know this sounds ridiculous to make an analogy with but I can’t help it. It’s like watching villain “Bain’s/Crane’s” courtroom scene in “The Dark Knight Rises”…

A hallmark of government fascism are “investigations” of political enemies.

The State Department used to call it out when we saw it in other countries.#J6

Dr. Simone Gold send me this statement last night related to the judge in her case.

She reported to prison today: pic.twitter.com/VETLbtUERU 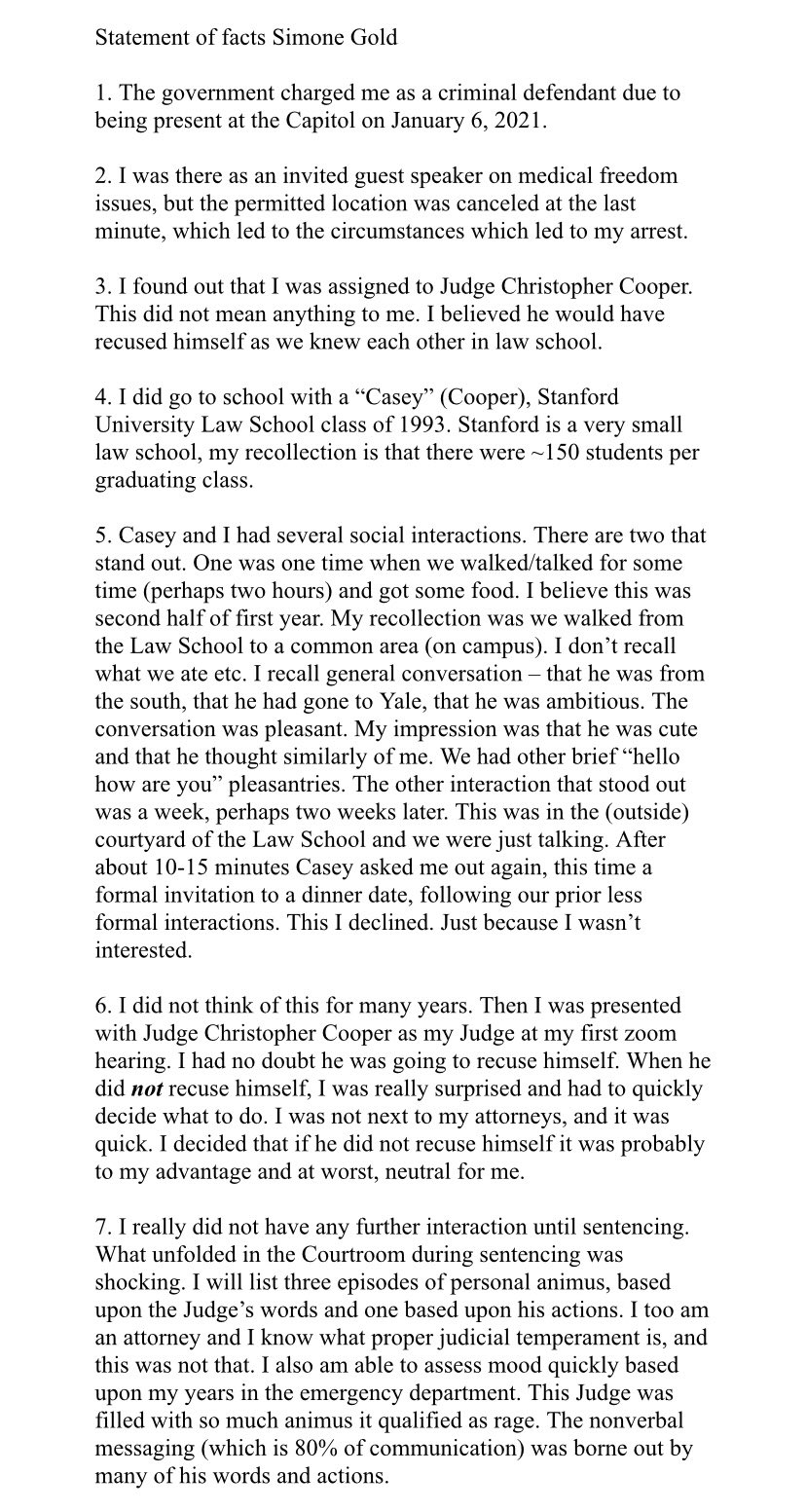 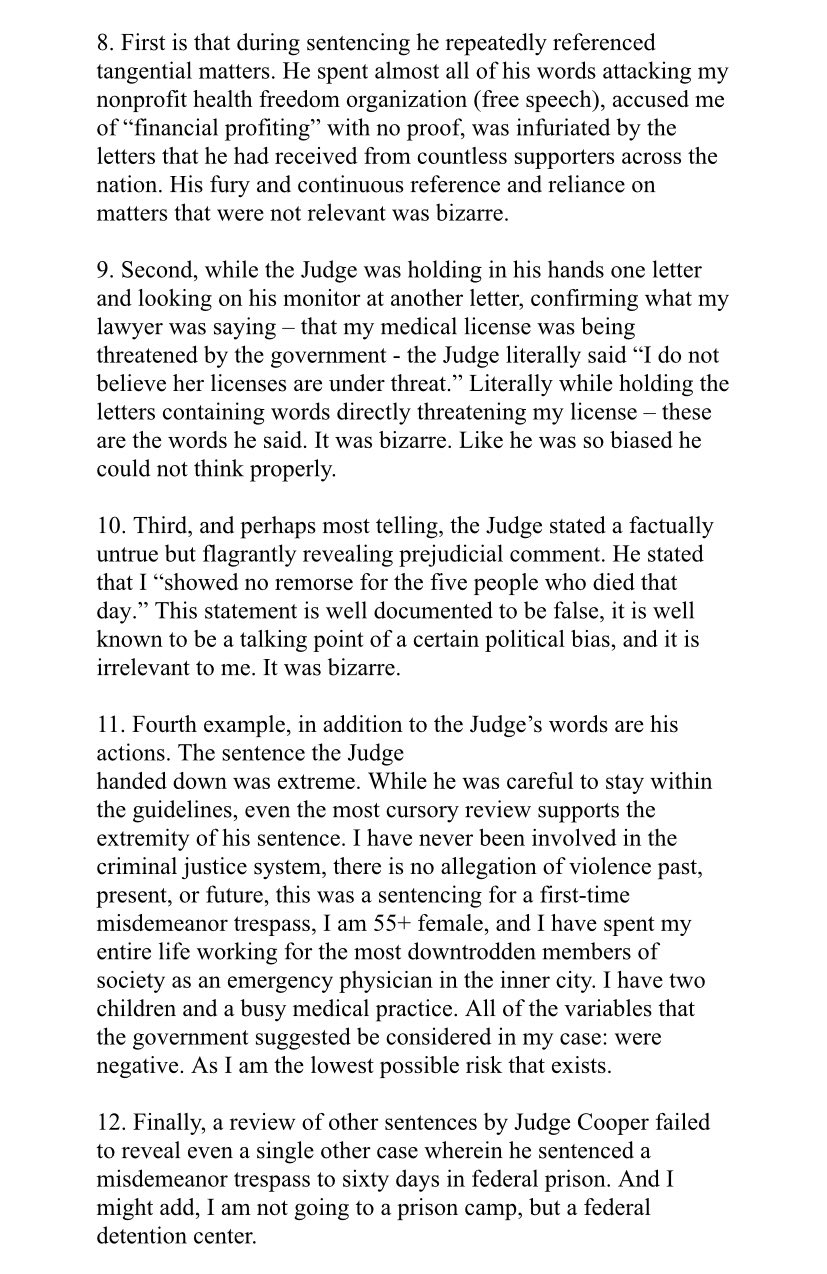 60 days in federal prison for misdemeanor trespass is outrageous!

^^This judge is an Obama appointee.^^

This is not justice. Nothing about how the J6 after-actions has been rooted in justice, or even equal treatment under the law. A lot of people who basically just trespassed inside the Capitol building … after Capitol guards/police unlooked and opened the doors to let the protesters inside … and did not vandalize or steal a damn thing, just calmly walked through the halls (some not even having entered the building but just a distance away on the lawn), have been arrested and detained in DC jails for a Hell of a long time without hearings or trials. And when some finally did come before a judge they were pressure and coerced into making false statements of guilt and even denouncements of Pres. Donald Trump. And then, no matter the length they had already been detained, given outrageous sentences.

U.S. District Court Judge Christopher Cooper in 2018 could have imposed a greater sentence on Khatallah — because two of his convictions pertained to terrorism — offering up the possibility of life in prison. But Cooper went with the lesser sentence of 22 years, attributing his decision in part to not relying on the charges Khatallah was acquitted of.

But the appeals court panel consisting of D.C. Circuit Judges Patricia Millett, Greg Katsas and Neomi Rao on Tuesday unanimously overturned the district judge’s sentence as too lenient “given the gravity of such an assault on an American diplomatic facility and the district court’s own recognition of the vital need to deter such crimes.”

“In sentencing Khatallah to just twelve years for the two support-of-terrorism counts and the property destruction count, the district court did not — and could not on this record — sufficiently justify its additional variance so far below the sentencing range that would have been appropriate even without any consideration of acquitted conduct,” the decision reads.

So, U.S. District Court Judge Christopher Cooper went as easily as possible on a terrorist and feels none of 55-year-old Dr. Simone Gold’s evidence need be considered in his fascistic treatment of her and her case, and in her unjust sentencing.

With their unrelenting witch hunt and their bogus committee hearings and prosecutions, the Democrats and their supporters in the Department of Justice, the establishment wing of the Republican Party and the corrupt mainstream news media have triggered another January 6th protester to take his life. Last week, Mark Aungst of South Williamsport, PA committed suicide, according to the Coroner Charles E. Kiessling Jr.

Aungst, a gas field well service technician, traveled to Washington D.C. on January 6, 2021, to attend the “Stop the Steal” rally organized by supporters of President Donald Trump. After the rally, Aungst joined thousands of others in marching to the U.S. Capitol.

He did not attack any police officers or engage in any violence. He did not destroy or damage any property in the U.S. Capitol.

Aungst entered the building twice and walked around. Along with co-defendant Tammy Bronsburg, Aungst took images and videos on a cell phone. According to federal prosecutors, he committed the misdemeanor crime of “parading or demonstrating inside a restricted building.”

Aungst and Bronsburg pleaded guilty to this misdemeanor, after three other charges were dismissed. He was scheduled to be sentenced on September 27, 2022, by U.S. District Court Judge Reggie B. Walton. Aungst faced the possibility of six months in prison and a fine of $5,000.

… Matthew Perna, another Pennsylvania man who traveled to Washington D.C. on January 6, 2021, and entered the U.S. Capitol, committed suicide in February.

He was facing several years in prison and was discovered hanged to death in his garage. According to his obituary, Perna “didn’t break, touch, or steal anything. He did not harm anyone, as he stayed within the velvet ropes taking pictures. For this act he has been persecuted by many members of his community, friends, relatives, and people who had never met him.”

As of several weeks ago, 855 Trump supporters had been arrested by U.S. Department of Justice officials for their involvement in the activities of January 6, 2021. Of that group, 300 have pleaded guilty to criminal conduct and 80 have been imprisoned.

Many of those prisoners have not been convicted in court and have been denied their basic due process rights. These prisoners have also made disturbing reports of mistreatment, assault, and the denial of basic human rights such as medical care. Their prison accommodations have been described as the “D.C. gulag.”

This travesty of justice must end. Republicans in Congress must demand this tyrannical persecution of the participants in the January 6th protests cease before more Americans are jailed or killed…

The key narrative of the Jan. 6 Committee is that Donald Trump wanted to incite the violence that took place that day.

To do this, they’ve hidden and manipulated evidence. As we’ve previously reported, they presented a doctored video of Trump’s speech, interwoven with violent images and audio, while not including the portion of President Trump’s speech in which he told his supporters to “peacefully and patriotically” make their voices heard. Not once did he call for any violence or for them to break into the building.

But the committee has done even more to undermine the truth. Prior to his rally, Trump informed various military leaders that the event would draw a “large number of protestors,” and instructed his then-acting Defense Secretary Christopher Miller and Gen. Mark Milley, chairman of the Joint Chiefs of Staff, to ensure it was “safe” by having troops available.

This evidence, not presented (nor denied) by the Jan. 6 Committee, is found in a Pentagon Inspector General report…

The Democrats are more responsible for the J6 security debacle than Trump.

Trump wanted J6 to be safe. The Pentagon ignored him. That is a fact.https://t.co/L1NzCJreCD

Here is Mike Pence on Jan 4, 2021 saying he would fight voting irregularities on Jan 6 in Congress pic.twitter.com/ddTpLsD1oW

Julie Kelly: J6 Committee – Media and Select Committee Continue to Lie About Sicknick: The real tragedy behind Officer Brian Sicknick’s story is the way the media and others continue to peddle falsehoods, portray innocent men as murderers, and seek sympathy based on a lie.

Andrea Widburg: Was the Pentagon involved in planning for January 6?

Mollie Hemingway and Tristan Justice: Exclusive: In Private, Cassidy Hutchinson Joked About Riot, Called J6 Committee ‘Phony,’ Praised Trump Before Changing Story: Hutchinson commiserated with other targets of the probe about how little information she had about any wrongdoing on Jan. 6.

Hey @SenTomCotton – heard you on @hughhewitt criticizing the Jan 6 hearings.

Then you said the strangest thing; you admitted you hadn’t watched any of them.

Here’s a tip: actually watching them before rendering judgment is more consistent with “Anglo-American jurisprudence.”

Here’s what Cotton said: “I think what you’ve seen over the last few weeks is why Anglo-American jurisprudence going back centuries has found that adversarial inquiry, cross-examination is the best way to get at the truth.”

Did he miss any adversarial inquiries to J6 witnesses? https://t.co/ceu2KlKrNT

The hallmark of any authoritarian regime is politicized justice. Under that system, your opponents go to jail, your supporters can do whatever they want and this reveals that the state exists not to serve the people who live in it, but to preserve itself and to crush all dissent. Hate to think we’ve reached a point anywhere near that here in the United States because there’s nothing worse than that or scarier or harder to fix, but in fact, we have reached that point. That’s where we are…

They and their biggest political donor George Soros funded the antif/blm riots and bail/defense funds.