So, this weekend I binge-watched (on Amazon Prime) a British TV series called “Britannia”. Here’s me, assuming it would be along the soap opera-ish lines of the other historical British period dramas I’m accustomed to sitting through. Nope. This one is more like if you were watching one of those stuffy, yet, frantic dramas … but while on an opium hookah pipe, at best, and a Woodstock ‘brown acid’ trip, man, at worst (no, not me). Anyhow, the precise content of the weird production aside with far too modern language peppered with old psychedelic hippie rock music aside (intro songs for the series are as follows: Donovan’s “Hurdy Gurdy Man” (season 1), Donovan’s “Season of the Witch” (season 2), and T. Rex’s “Children of the Revolution” (season 3)), I had a hard time taking the storylines seriously … Hell, I had a hard time finding atleast one friggin’ character I gave a crap about. Lots of tribal kings and queens, witches, prophecies, herbs and spells, wine and bad water, very sharp blades, pointy things, and fire … lots of fire … and lots of tattoos, piercings and skin carving too. 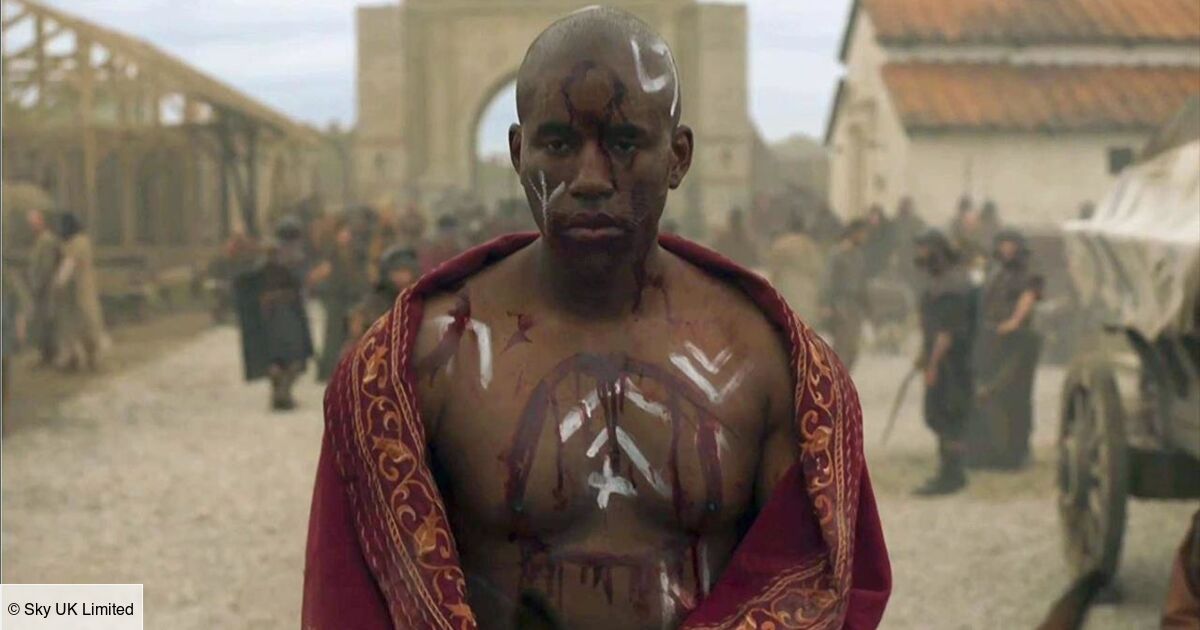 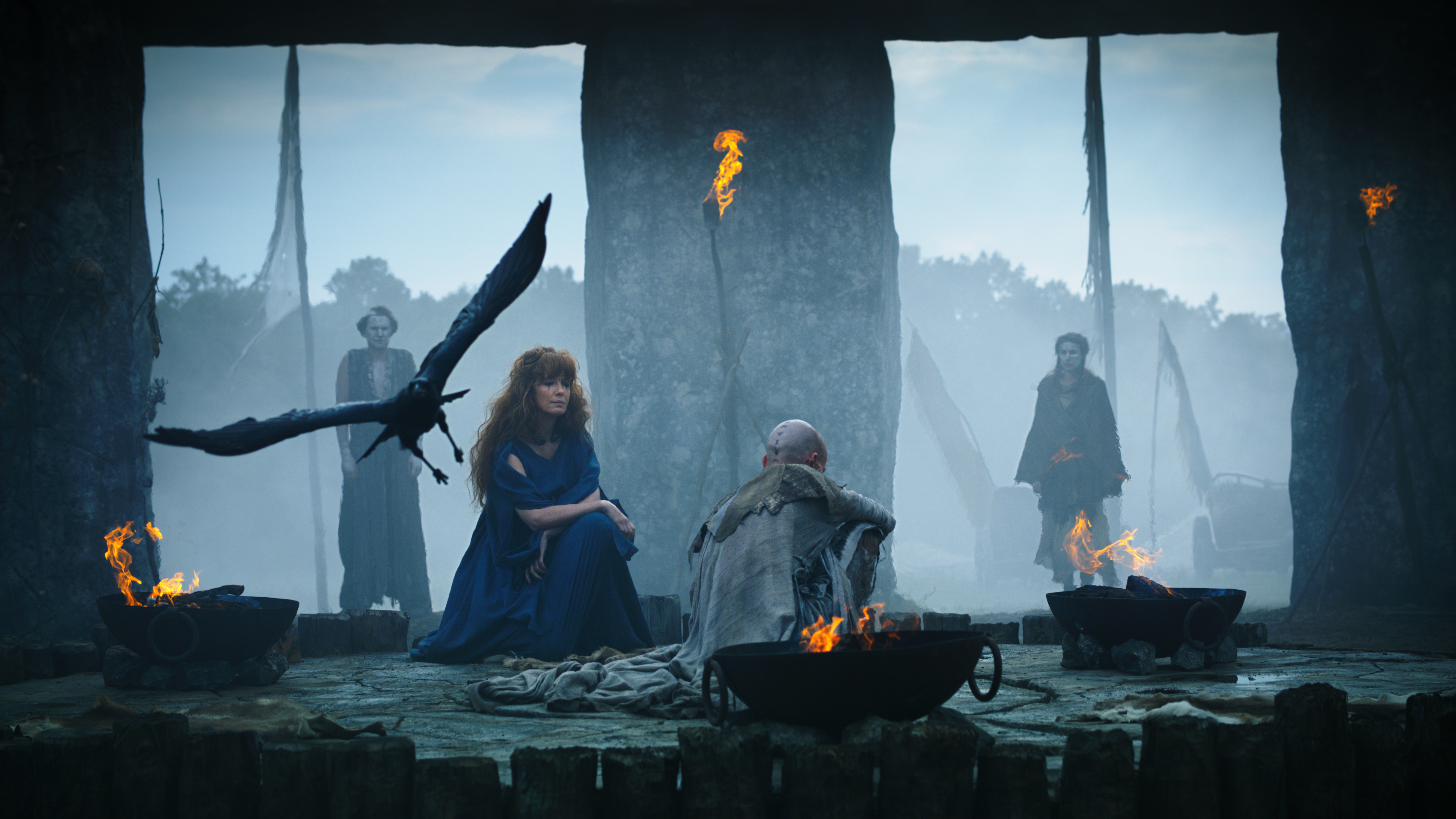 “Brittania” takes place about a dozen years post-crucifixion of Jesus Christ around 43 AD, when the Roman Empire makes a second attempt to invade and usurp then Britian and subdue and tax her feuding savage tribal and Druid/paganist peoples 90 years after Julius Caesar’s failed first attempt. I mean, WTF? Is the thing even remotely accurate on any real historic facts/data? I’ll spend today looking through some information to see if I can make any sort of reality connections amid what I watched.

I nearly dumped the series just a couple of episodes into the first season but soldiered through (pun intended). And then thought “maybe” it would get better story strength and character development in the second season (knowing full-well I was just being a spectator at a trainwreck). It seemed to get some legs by the end of the second season. Well, you know what happened next, doncha? Yeah, I had to see season 3. However, season 3 has yet to be added to Amazon Prime. None of my other servers was carrying it, so, I clicked onto the “Epix” channel on Prime for its free 7-days offer and watched the entirety of the often times disturbing season 3 until about 4am today. While still a bit lopsidedly satirical and quirky at times the action did get better and there were more ‘groovy, man’ oldies songs used throughout some scenes. However, the Roman General Aulus Plautius’ high priestess wife and her entourage cult move into his digs and bring along their own “one god” and start making “sacrifices” at their orgy feasts— ugh! As if there weren’t already enough complete lunatics in Britannia at that time.

By the by the season 3 final episode’s cliffhanger, I still was not overly impressed, but a bit more interested and invested in a few characters and the new storyline that hinted at an introduction of Christianity into the multiple underworld gods of the British Druids and tribes, and those of the intruding Roman army and their mix of conquered nationalities within their uniformed soldier ranks that had pretended to adopt the Roman gods while still praying to their own.

Anyhow, at the center of this were other interloping outsiders to Britian that were actively looking for the powerful and magical The Lance of Longinus that allegedly Roman Prefectus Lucius (along on the Roman invasion of Britannica but deserted the army in season 2) used to pierce the side of Jesus while He hung dying on the cross. Throughout the seasons you could see Lucius had some underlying ‘issues’, and you were introduced to this background in the third season. He has adopted a ‘path’ to find the young girl Cait (whom the Roman General is also heatedly in search of) the Druids have designated “the Chosen One” to let her know where the lance is and how she needs to use it to wield power to drive-out the Romans and unite Britannia. 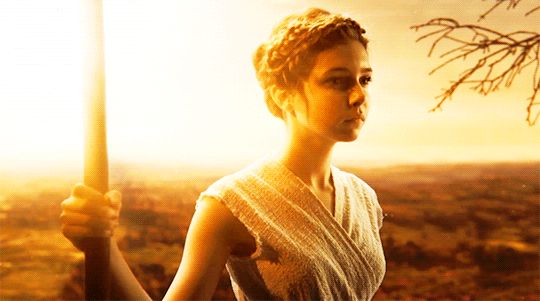 I think the writers and producers tried to ride on the huge success and following of “The Game of Thrones” series, but it just ain’t nearly that good. This is like some “purple haze” writing sessions where you can imagine a steamy marijuana bong being passed around while the writers were ‘brainstorming’ and find themselves in laughing jags saying, “Yeah! Yeah, that’s funny as Hell. Put that in there!” Never mind the modern-day lingo/slang and vernaculars that stick out like an infected stump of a hacked-off thumb most times in the barely mid-first century, especially when in the next scene some bloke in a pub is describing the dragon he saw or heard about (this happens more than once in the series and hints at a possible lingering creature that might pop-up in the future?). “Britannia” is a messy but very miniscule and vague collision of “GOT” and “The Lord of The Rings” with a complete jump off the tracks before even getting to the “Monty Python and The Holy Grail” station … but not yet quite a shitty Saturday Night sketch level.

While I am really unable to find any solid information of a season 4 of “Britannia” ahead (season 3 had been released in September 2021) I cannot see the writers leaving the story with season 3’s outrageous cliffhanger scene. IThe closest I’ve come is a season 4 could be set for release later this August, or maybe August 2023. I also ponder what a season 4’s opening credits theme song would be…

Season 1: I’m assuming this was meant to represent Divis, the Druid mentor to the young girl Cait who was learning the craft…

Season 2: Which was meant for Cait, but also for some of the other Druid witches and lingering tribal queens defying the Romans…

Season 3: Representing the beginning resistance to the Roman invaders…

Do I recommend watching the three seasons of “Britannia”?
It’s very far from the top hemisphere of my list but have-at-it and see what you think.
The shock factor gets higher in season 3 when the General’s wife invades his `hood.