April 8, 2022, WASHINGTON — The news broke yesterday that a former GOP staffer, Ruben Verastigui, was sentenced to 12 years in prison for his involvement in a child pornography ring. The details of the case are extremely disturbing. According to a Department of Justice Press Release:

Ruben Verastigui, 29, of Washington, D.C., was sentenced today to 151 months in prison on a federal charge of receipt of child pornography.

Verastigui pleaded guilty on July 9, 2021, in the U.S. District Court for the District of Columbia. He was sentenced by the Honorable Amit P. Mehta. Upon completion of his prison term, Verastigui will be placed on five years of supervised release. He also will be required to register as a sex offender for at least 15 years.

Verastigui was arrested on Feb. 5, 2021. He has been in custody ever since.

The details of this case are horrific and disgusting. Verastigui was at one point a digital strategist for the Senate Republican Conference. The D.C. Metropolitan Police arrested Ruben A. Verastigui after an investigation revealed he had “distributed, received, and possessed images of child pornography” between March 2020 and February 2021. The investigation took place while he was still working for the GOP. 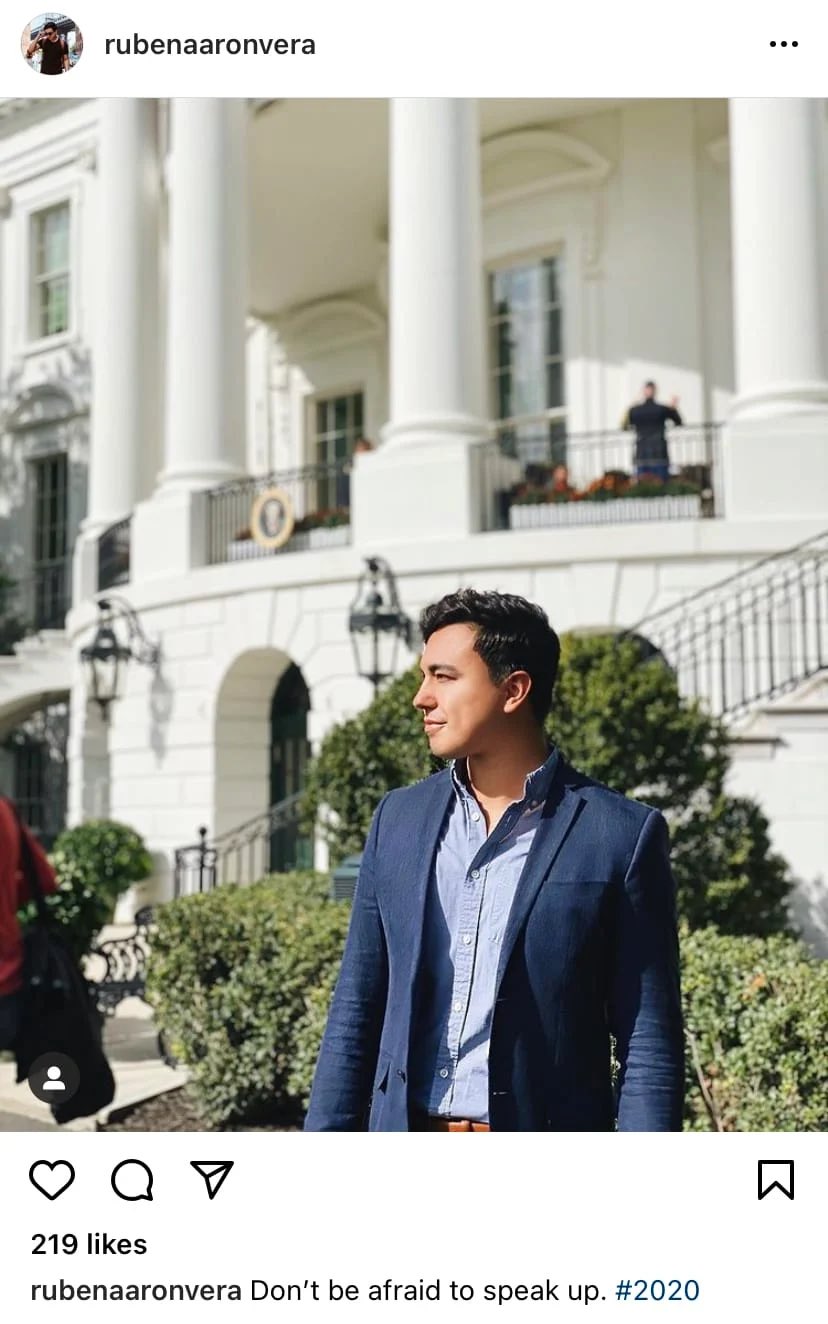 Ruben has posted pictures of himself while he was a Trump aide and GOP staffer on his Instagram account. 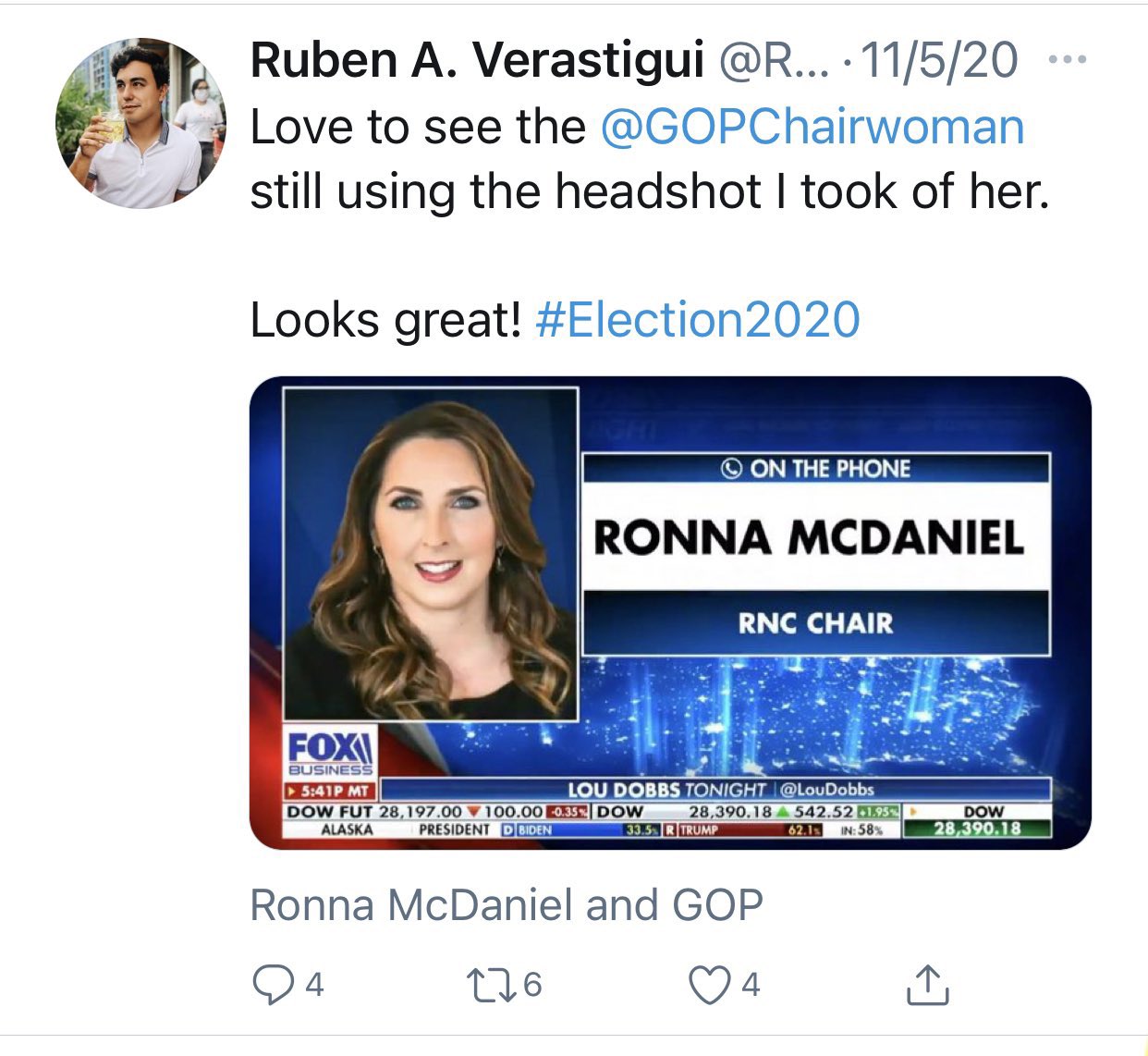 Here Ruben brags about having been the one who took the photograph of Ronna Romney McDaniel, the GOP Chairwoman indicating his closeness to the higher echelon on the Republican party. 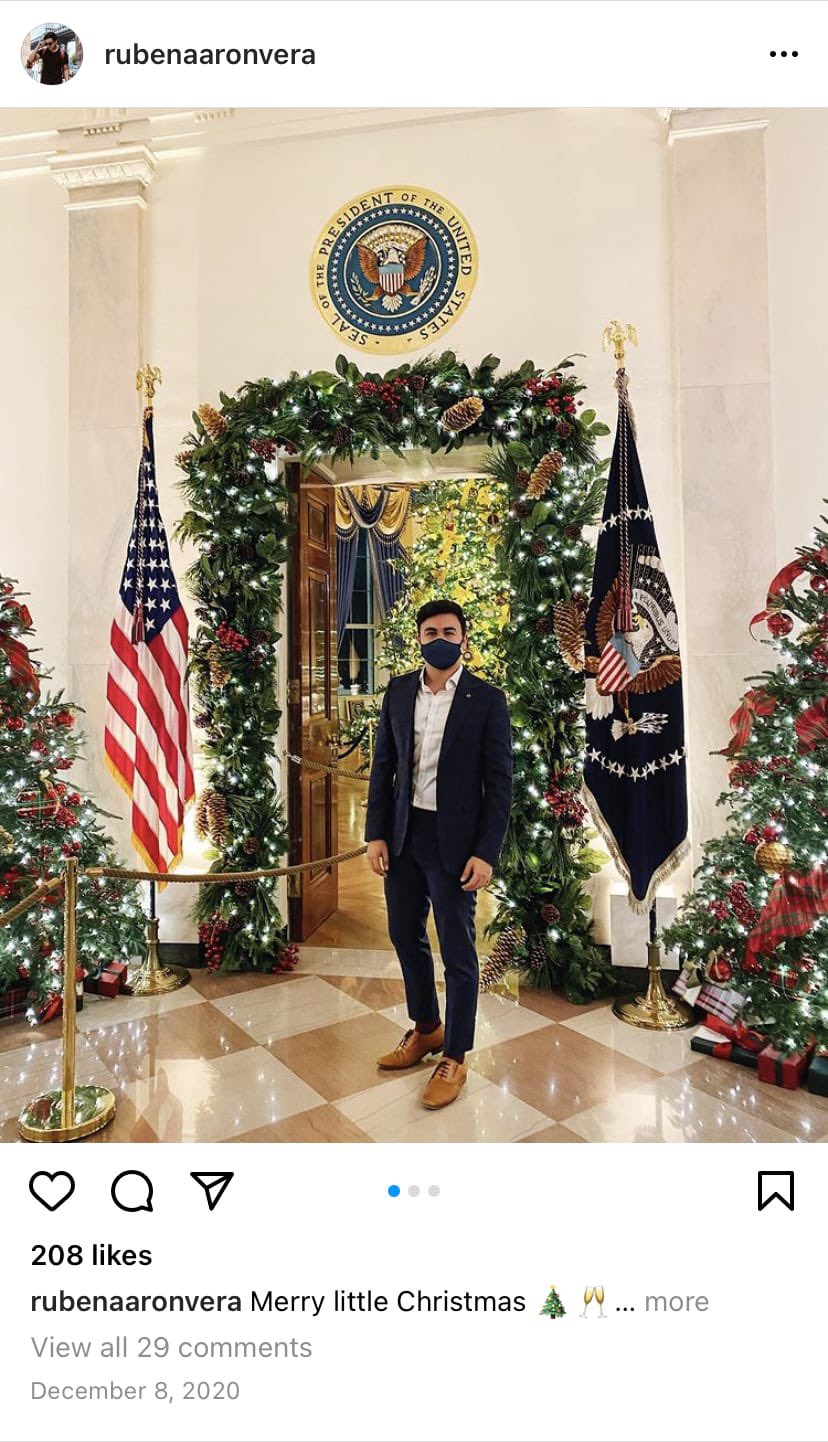 Another photo shows him posing under the seal of the President of the United States at Christmas of 2020.

He was also a member of Students for Life America, Live Action, Susan B. Anthony List, and previously worked for anti-abortion group, Texas Right to Life. He’s reportedly also a member of the Knights of Columbus. 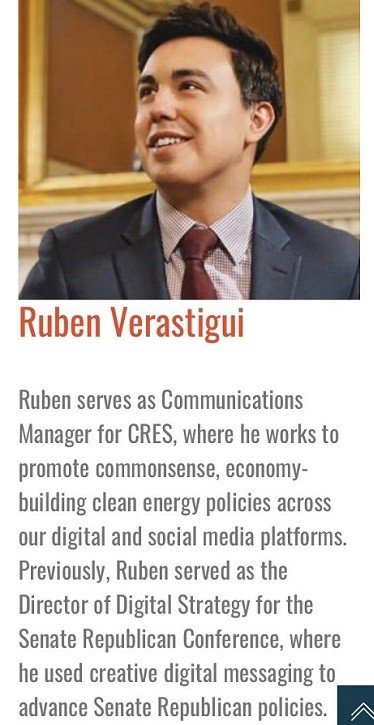 Ruben also spoke at the March for Life, ironically claiming we need to protect the innocent children.

According to The Daily Beast:

In a group chat on the site, Verastigui went by the username ‘Landon’ and the handle @somethingtaken, according to investigators.

The court documents detail a very disturbing chat on the site in which Verastigui told another user that ‘babies’ were his ‘absolute favorite.’

‘Well like I said babies are some of my biggest turn-ons and beast,’ Verastigui wrote in the direct message, per court documents. ‘Young rape… Fuck I love all that.’

Verastigui sent further messages about wanting to view ‘hardcore’ videos however The Daily Beast has withheld them due to their graphic nature.

When he was sent a video file showing an adult sexually penetrating a child, he replied ‘FUCK YES!!!’

According to the criminal complaint, Verastigui asked another member of the group to come to D.C. “for the purpose of sexually abusing a minor.” During another discussion, he was sent and viewed a video depicting the rape of an infant.

Verastigui’s LinkedIn says he worked for the Republican National Committee from 2017 to 2018, which included working on social media ads for the Trump Make America Great Again Committee and Donald J. Trump for President, Inc.

As Holt originally noted, Verastigui has worked for several anti-abortion groups including March for Life, Students for Life America, Live Action and Susan B Anthony list. A YouTube video from 2013 shows that he spoke at the National March for Life in 2013. – The Daily Beast

Here is the video of his hypocritical speech at the March for Life event from 2013:

Then there is Adam Hageman who worked in the Trump administration as a commerce official and prior to that for Charlie Kirk’s Turning Point, USA.

Caitlin Oprysko of Politico reported on the arrest:

A Trump Commerce Department official has been jailed since November on federal charges of receiving and possession of child pornography.

Adam Hageman, 25, is accused of ‘sharing a child pornography video and commenting several times on sexually abusing children’ as captured in graphic messages in an online chat, according to a complaint in U.S. District Court in the District of Columbia.

A LinkedIn profile bearing the name Adam Hageman shows that the user was an advance representative at the Commerce Department beginning in May of last year, and according to the complaint investigators confirmed with the department Hageman’s date of birth, employment and residence in D.C.

At the time he became a federal employee, Hageman had been posting in the chat group for months, prosecutors allege.

According to a pretrial detention memo filed on Nov. 17, prosecutors charge that Hageman was ‘an active participant, often soliciting child pornography or commenting on it,’ and ‘invited at least one other person who he knew to be interested in child pornography and bestiality to the chat.’

The charges carry a mandatory minimum sentence of five years in prison and a maximum of 20 years, according to prosecutors, excluding possible additional charges ‘for advertisement and distribution of child pornography in another district in which the penalties appear to be even higher.’

Homeland Security agents executed a search warrant at Hageman’s Washington home on Nov. 12, according to the complaint, at which point Hageman ‘stated that he had been saving child pornography’ and provided officers with a password to access stored content on his phone. He also told authorities he’d downloaded child pornography as recently as the day before and admitted to using the unnamed app to access and download videos, the complaint says.

Hageman was taken into custody the next day.

According to the pretrial detention memo, Hageman’s phone ‘contained at least 33 videos that appear to contain sexually explicit depictions of children, including of prepubescent children.’

An attorney listed for Hageman declined to comment on the ongoing case.

Details in both men’s arrest warrants suggest they were participants in the same group that investigators began looking into last June. According to both Hageman and Verastigui’s warrants, investigators discovered a group of at least 18 individuals ‘who were trading child pornography on a particular website’ that remains unnamed in the complaints.

Court documents show that Hageman is being held without bond. The pretrial detention memo filed by prosecutors makes an aggressive case for his continued detention, calling him a ‘danger to the community’ and pointing to messages allegedly sent by Hageman encouraging other members of the group to assault minors, expressing his age preferences and his frustration with the pandemic for limiting his ability to expose himself to children in public bathrooms.

A Commerce Department spokesperson said that Hageman no longer works for the department and has not worked there at any point in the new administration.

n Instagram account bearing the name Adam Hageman and whose handle is the same as one mentioned in the complaint shows photos of the user on the South Lawn of the White House, standing in front of the Commerce Department seal and at the Trump International Hotel in Washington throwing a thumbs up with now-Rep. Madison Cawthorn (R-N.C.).

The LinkedIn profile bearing Hageman’s name shows that prior to joining the Commerce Department the user was a Phoenix-based events administrator for Turning Point USA, a group for young conservatives whose events have frequently drawn top Trump administration officials — including the former president himself.

The government’s pretrial detention memo notes that Hageman is also under investigation in Arizona, where investigators appear to have first become aware of the online chat group. The memo alleges that Hageman was ‘active in the group in both locations.’

You see the kinds of photos Adam posted to his social media accounts, like the following: 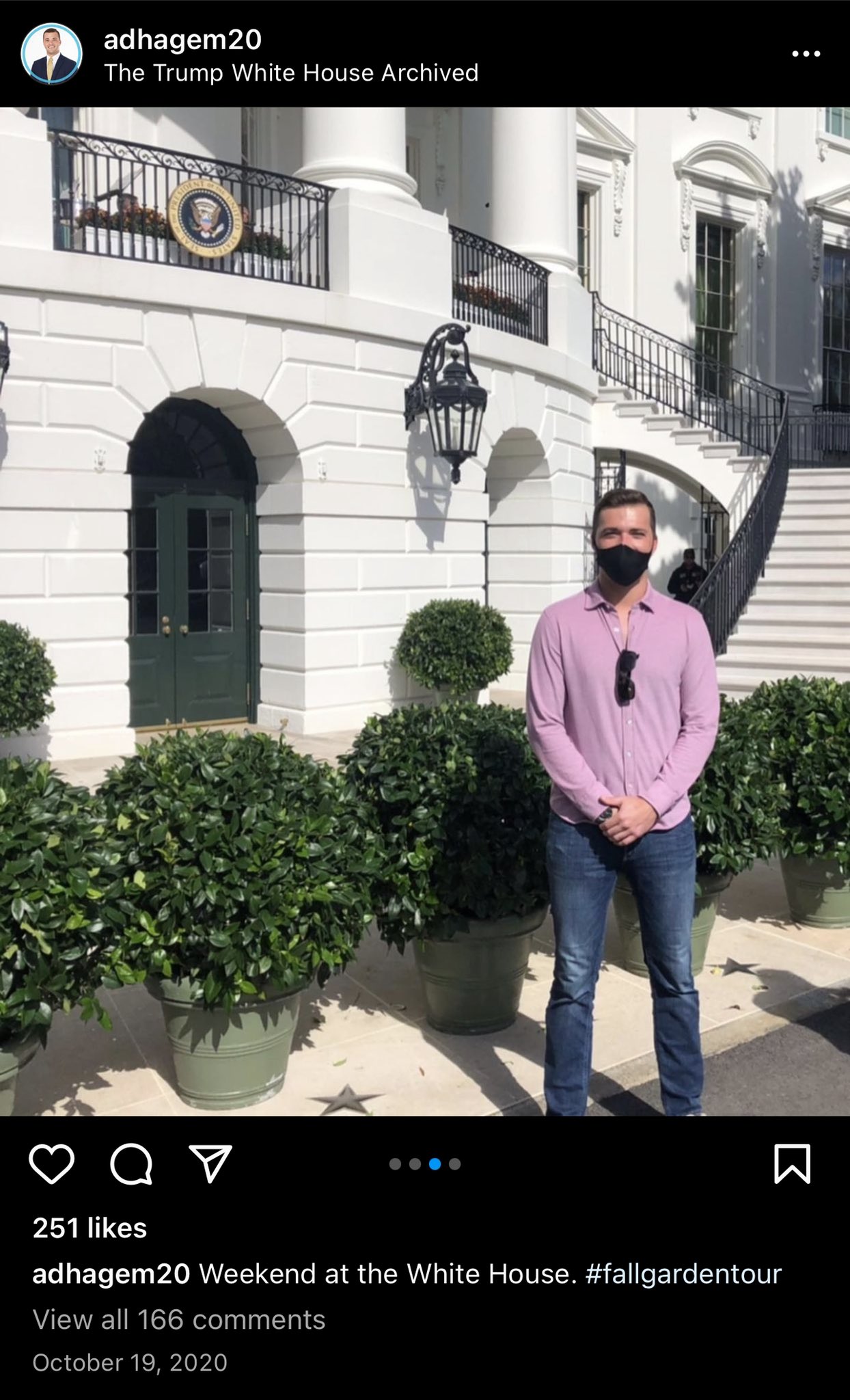 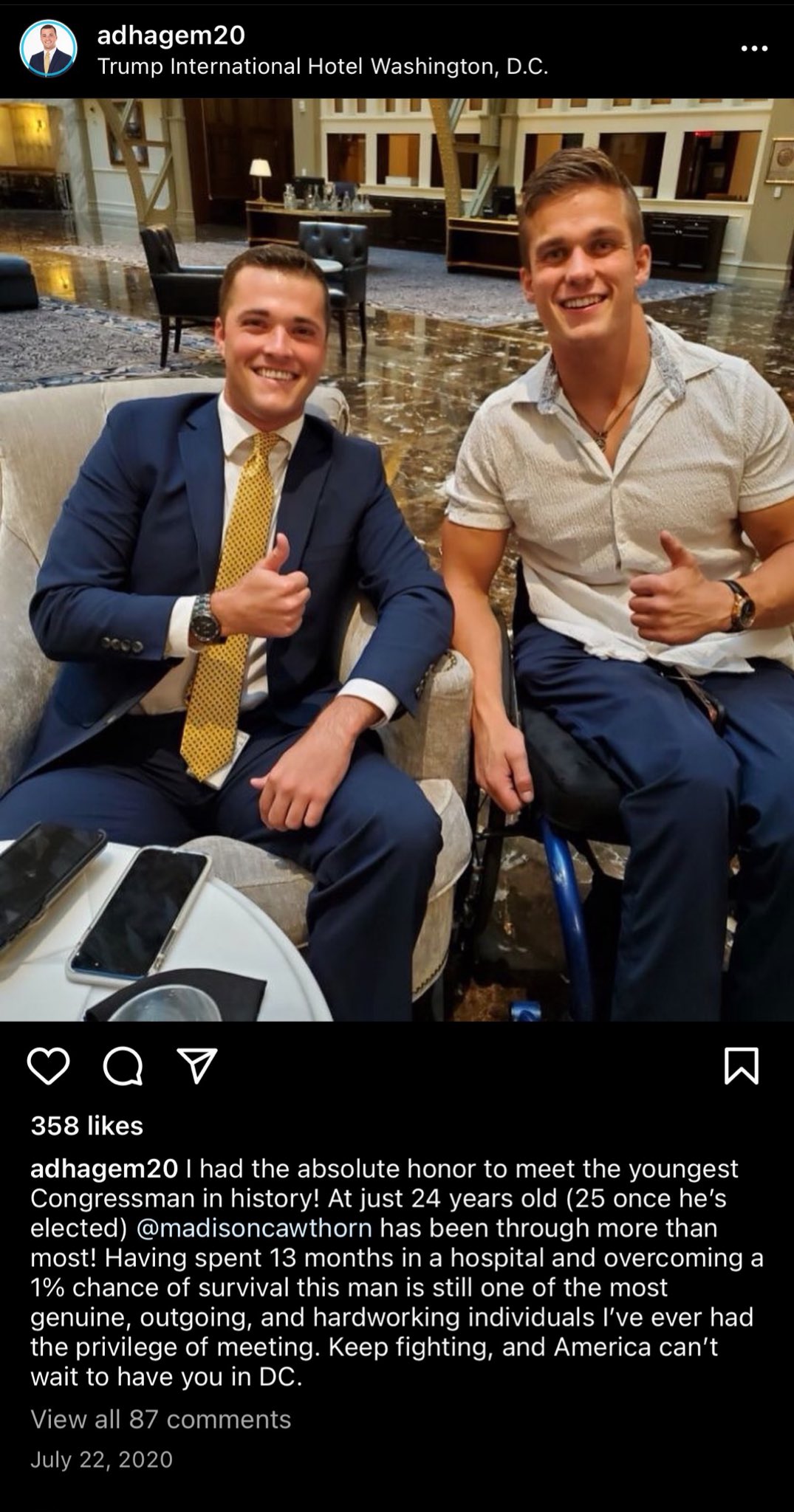 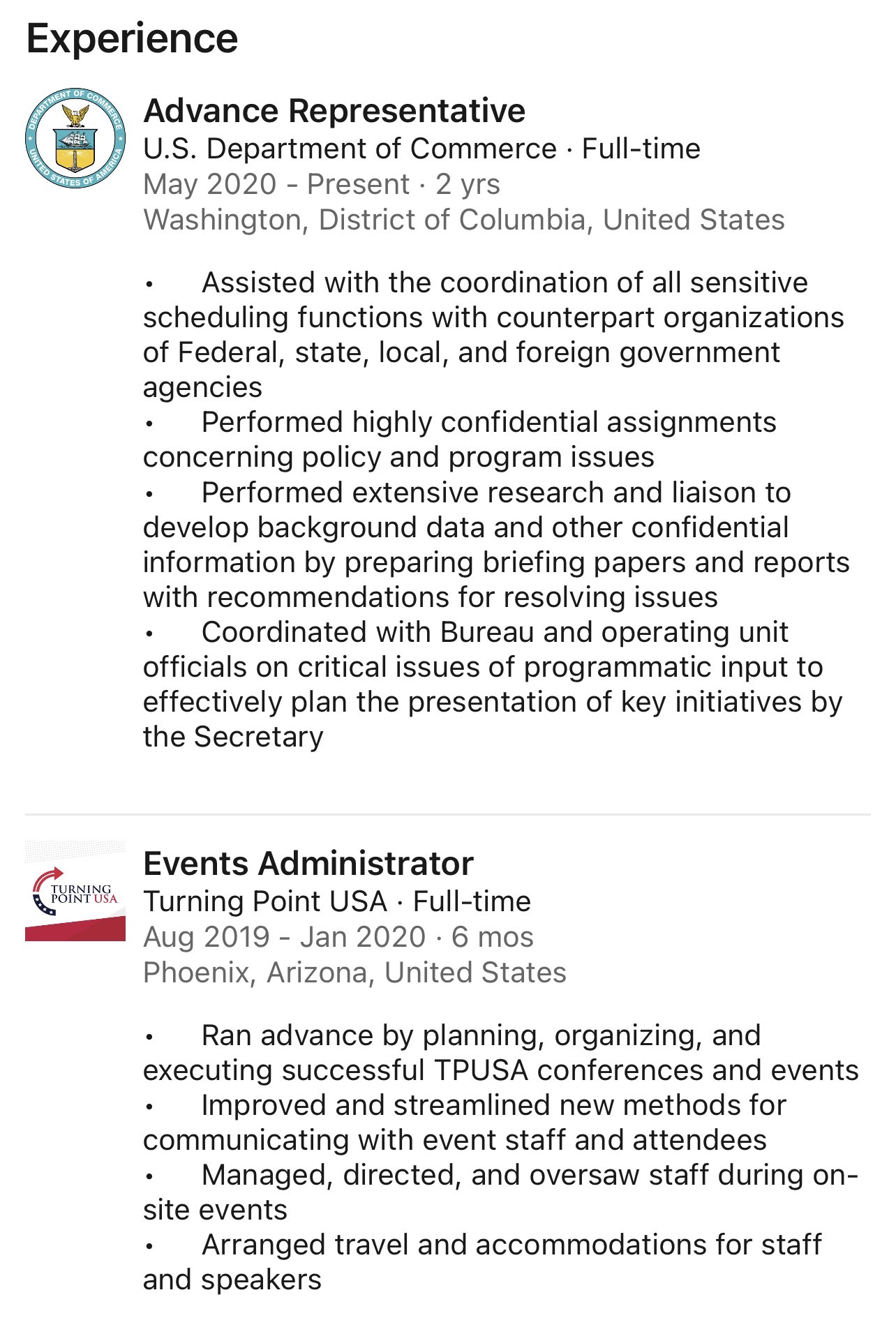 This is incredibly graphic and disgusting.

It is so awful I am at a loss for words.

Hageman has worked for Charlie Kirk’s TPUSA, and at the Commerce Department. pic.twitter.com/27WGZVK6rO

Why didn’t these cases get more coverage?