August 27, 2020 – A startling set of documents have been leaked online from a Black conservative teacher who has been in education for over 25 years. He has chosen to remain anonymous due to fear of attacks and reprisal from the school. The 800-plus pages of documents comprise a manual for indoctrination of elementary school children into anti-White racism, and Marxist/ communist political ideology. The plan discusses “BLM Week” as a concept to be celebrated in schools across the nation and includes a “student voting starter pack” in an attempt to use students as activists to agitate for a political agenda.

The website, “BLM at School” glorifies domestic terror, and the murder of police officers. Right at the bottom of the HOME page of the website, we see this quote:

It claims “it is our duty to fight and to win,” quoting Assata Shakur, known to many of us as Joanne Chesimard, a murderer and domestic terrorist of the Black Liberation Army.

As you can see from Assata Shakur’s Wikipedia page, she murdered a State Trooper in cold blood, and she advocated for tactics like murder, kidnapping and bank robbery. Somehow she was able to flee the U.S. (escape from a Clinton correctional facility?) and ended up in Cuba where she trained mercenaries.

We have 800 documents (not pages – DOCUMENTS) of leaked grade school curriculum being taught across the country. ALL of it is meant to feed our kids Marxist values, and NOT ONE media outlet has looked into it. Until tonight. pic.twitter.com/jUv6mFcu5c

Glenn Beck will be doing a detailed examination of the documents on BlazeTV tonight.

The documents were posted on this account. This proposed curricula will not be confined solely to New York. As the documents show, they have nationwide Teacher Unions promoting the material and demanding it be implemented.

To be clear, this isn’t the official curriculum for NY

It is being used and promoted by teachers in NY

Keep politics out of education

We must expose this insidious agenda before it can take hold in our schools. It is poisonous and has no place anywhere near our innocent children.

Following up on my tweet about the BLM school curriculum, attached is a statement from the source of this information

This is where incremental concessions lead – it never stops

The Universities were not enough, now they want to push their ideology K to 12 https://t.co/fEVK0iXhn4 pic.twitter.com/R16rCQSDPs

Please download and archive the 800 pages from this Google Drive, because I have a feeling they may disappear. Google has been known to even censor word documents and doctors’ research papers.

Let’s take a look at how they are trying to indoctrinate our children: 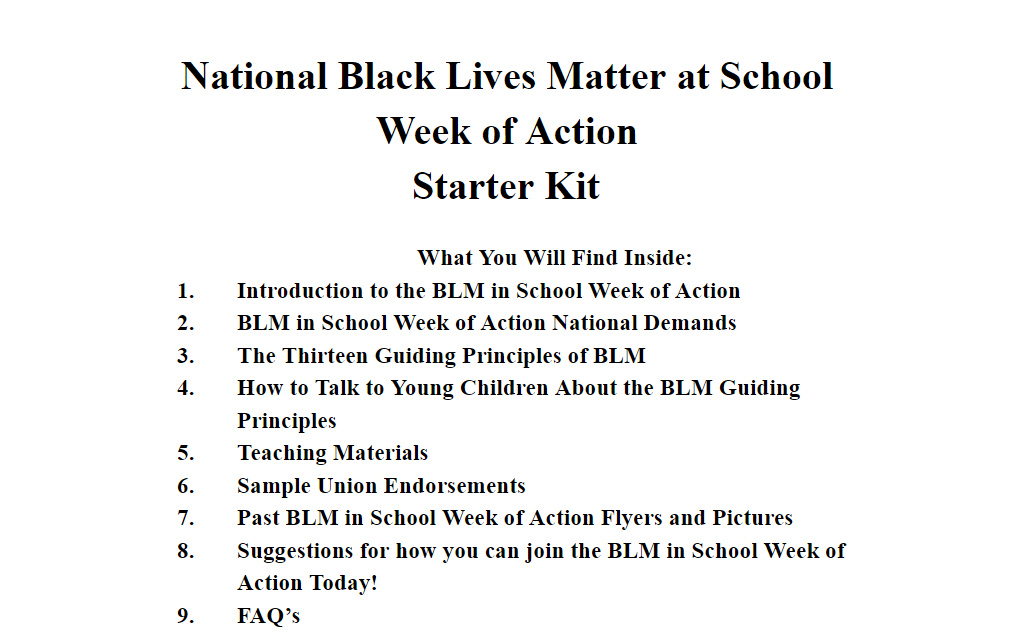 They promote something called a “week of action,” during which elementary school children will learn how to be Left wing “activists.” They include a section entitled “how to talk to young children about the ‘BLM guiding principles'” which are political, and extreme. 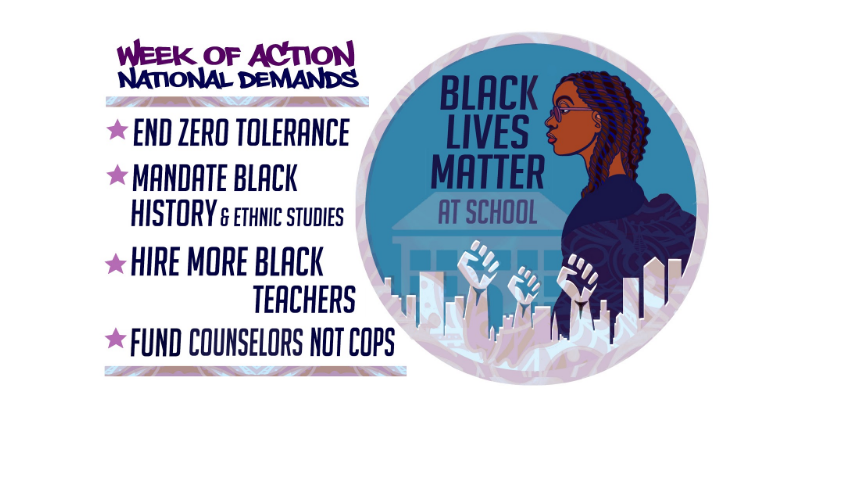 This is not appropriate for schools. Not only is this racist, but these “guiding principles” resemble the communist planks. 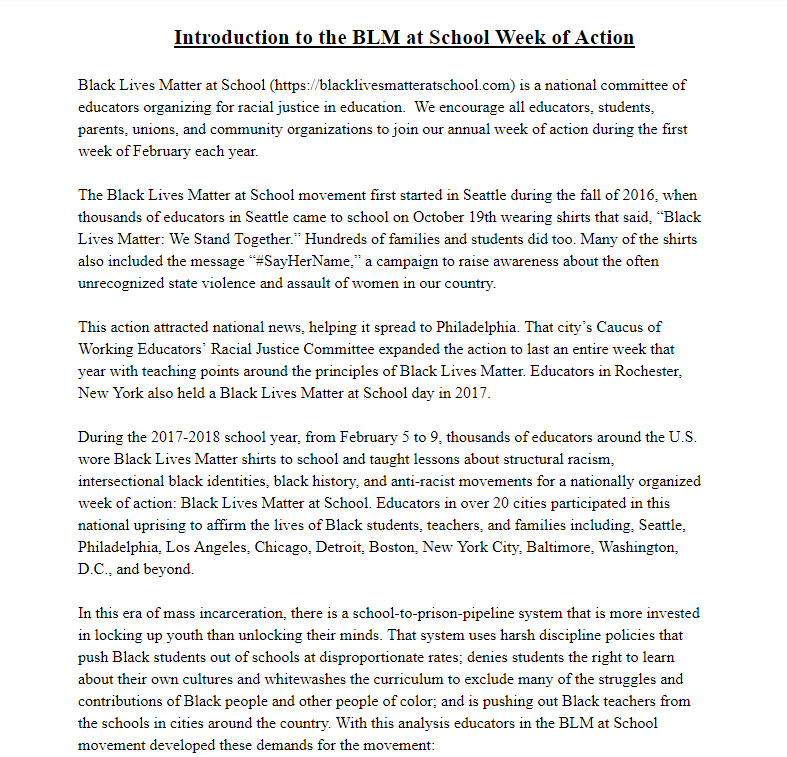 They claim to be “educators” that are agitating for what they call “racial justice.” Do you want your kindergarten kids to be forced to go through such traumatizing experiences? Why would teachers be telling children that police shouldn’t have funding? Is this a concept a child can even understand? Is this designed to make them frightened of police officers who are there to protect them? What about children who have parents in law enforcement? 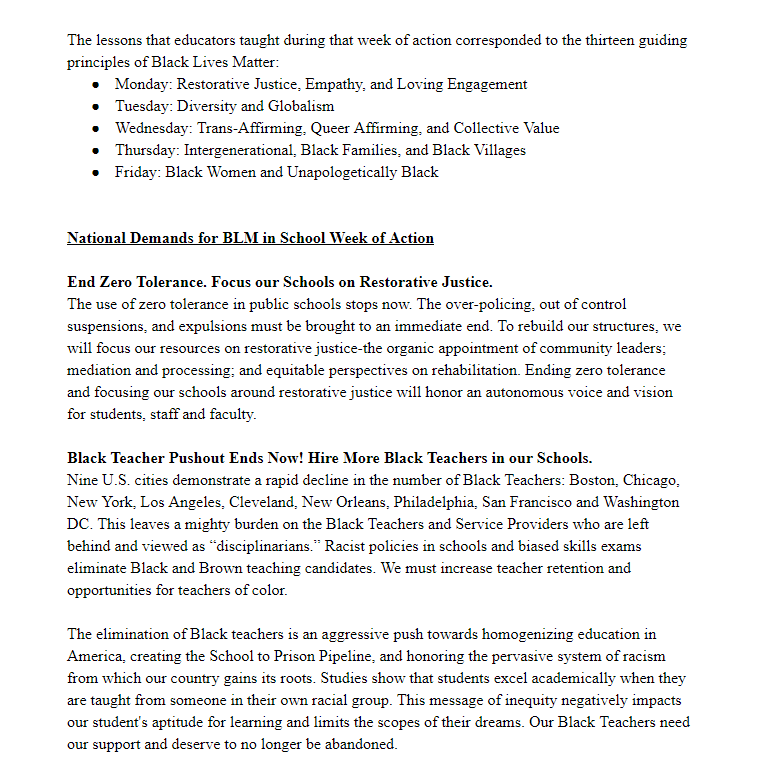 This is not objective, nor is it fact based.

How will this curriculum make White children feel? 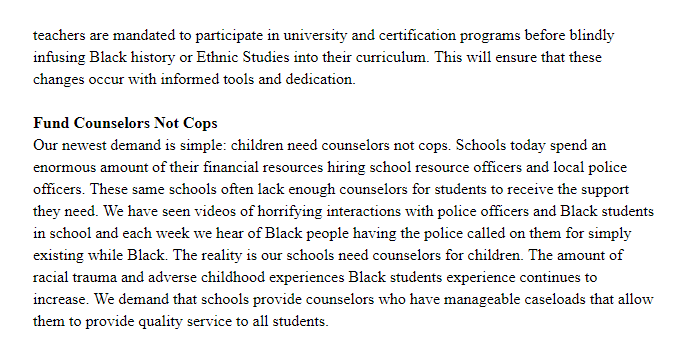 Campus police are important, because they are there to protect the children and teachers. The documents reference news stories that have been debunked. They do not refer to any CRIME statistics or FBI statistics. 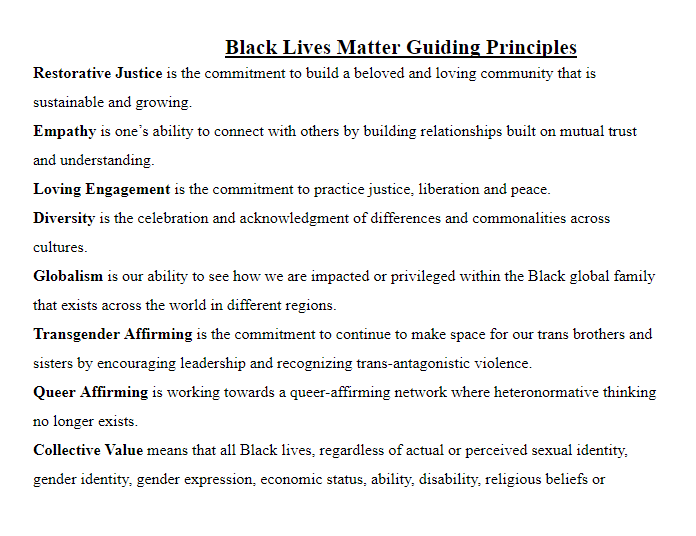 This is totally inappropriate and beyond that, it is entirely subjective and overtly political. 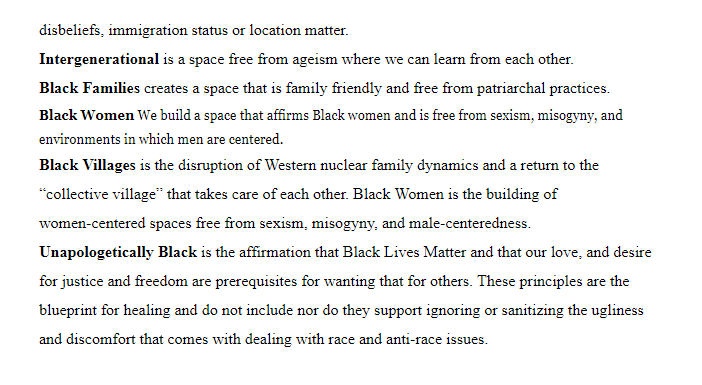 There is no representation of the opposing viewpoint. The children are being given only one narrative and ideology, and they are not being exposed to counter information. 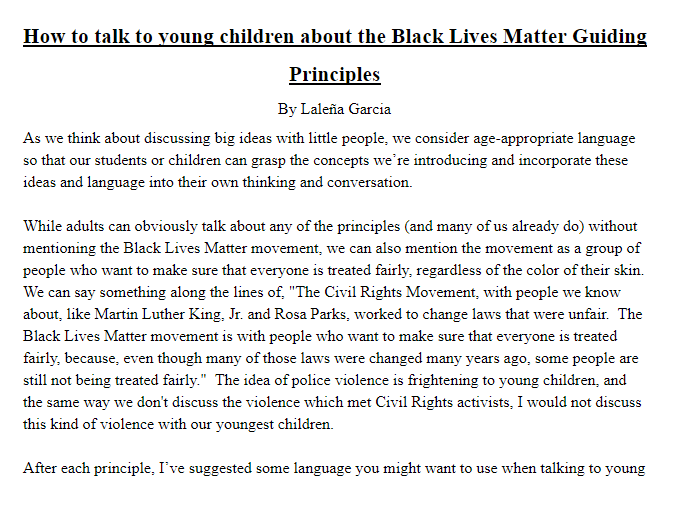 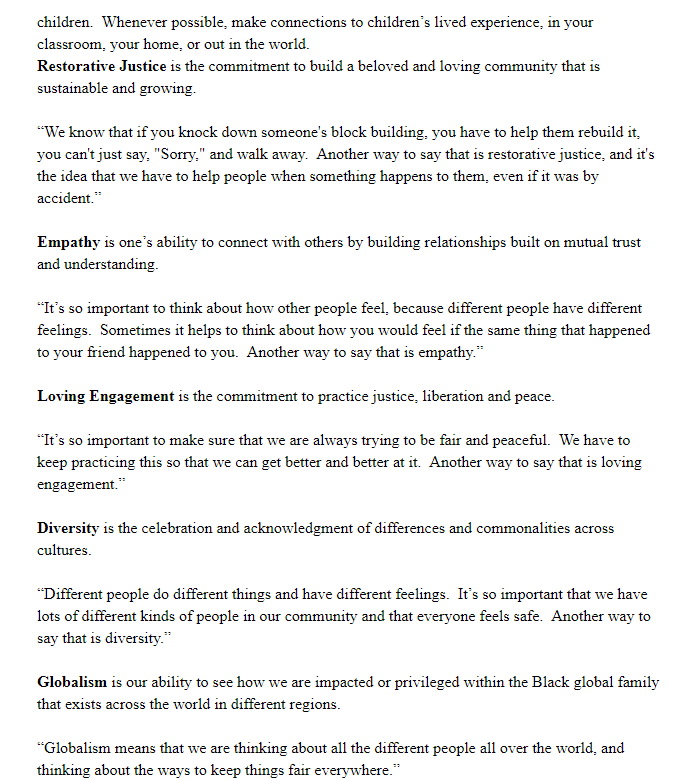 This is literally describing how to indoctrinate young children with Marxist, racialized ideals. It is NOT education, it’s textbook communist curriculum. 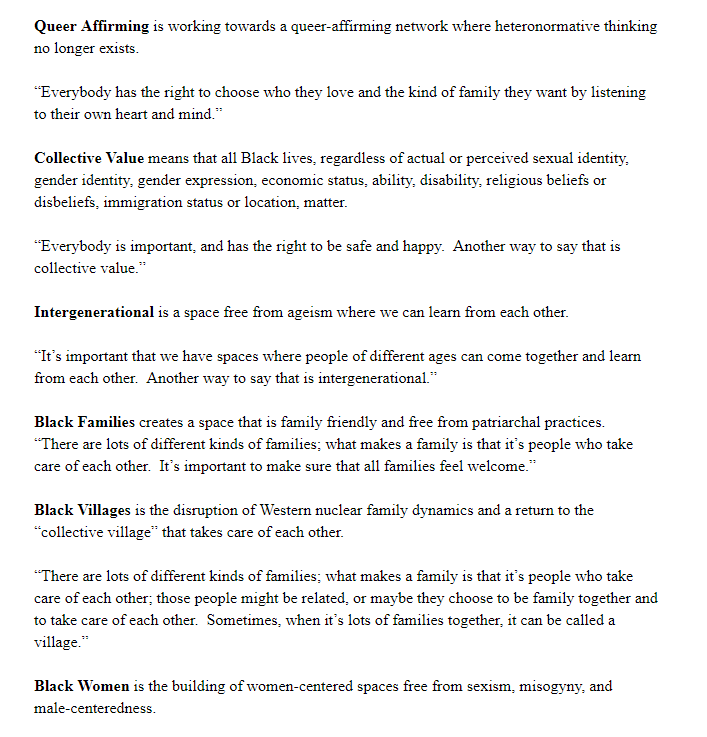 There is no mention of White, Hispanic or Asian families or “villages.” 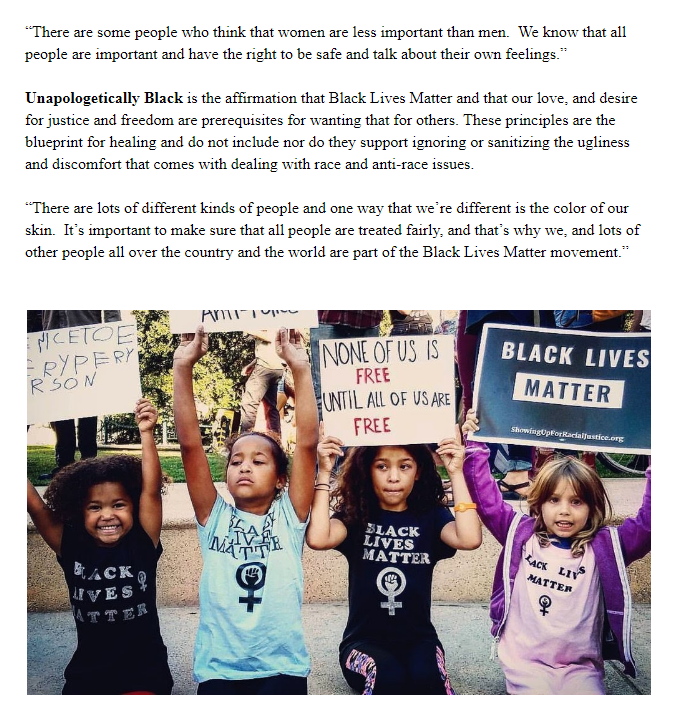 You will notice these children are so young, their brains are still developing. They cannot comprehend the concepts they are being asked to parrot. They also have them all dressed in Tshirts that have upside crosses on them. 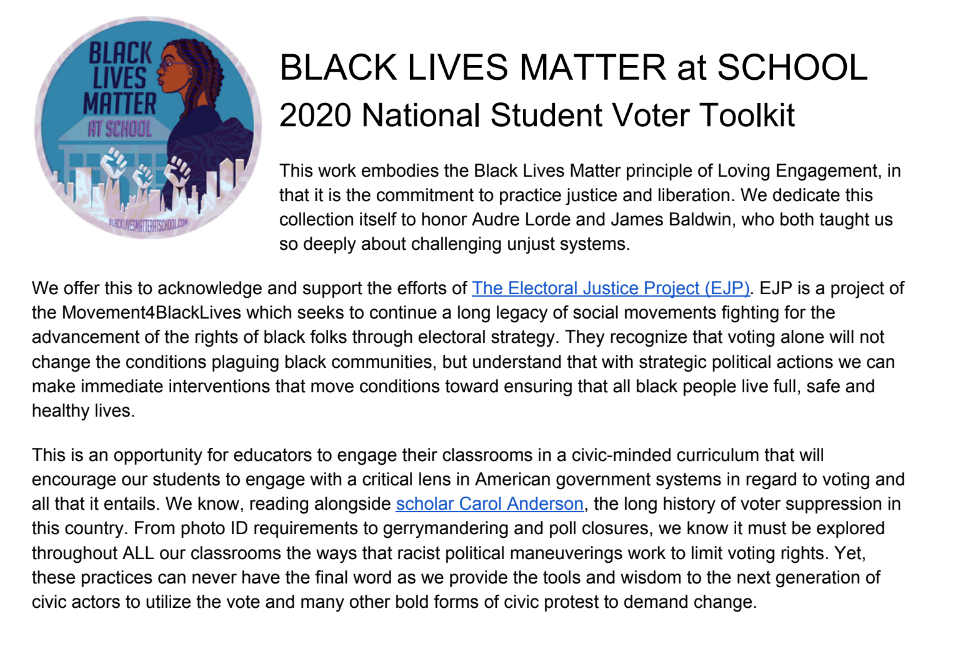 This is all about Marxist “social justice” and they are promoting a student voter toolkit, for children not even old enough to know what voting is, let alone being able to actually vote. We can also see how this connects to Democrats’ attempts to change the electoral college system. 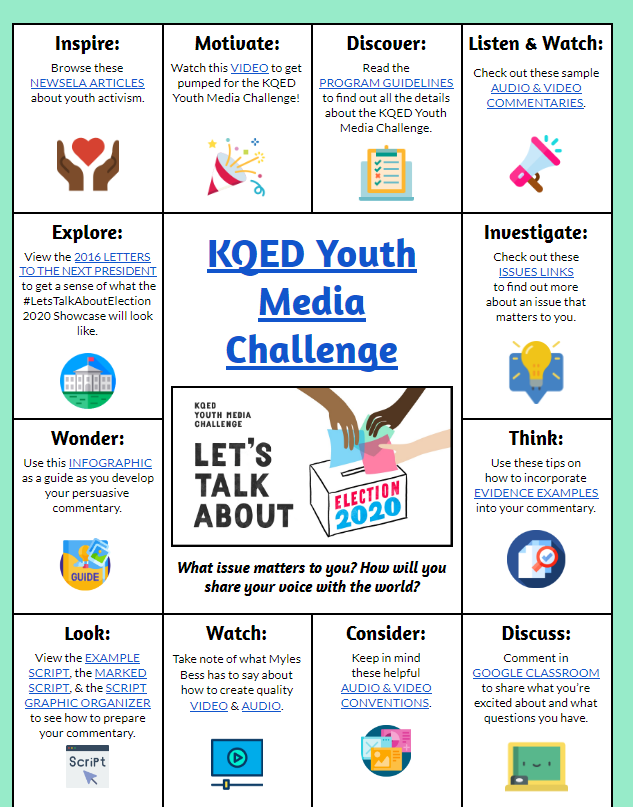 The above graphic is a promotional poster for a so-called “Youth Media Challenge” that gamifies far Left activism, to make it fun for the kids. They continue to talk about adult issues, news and the elections. 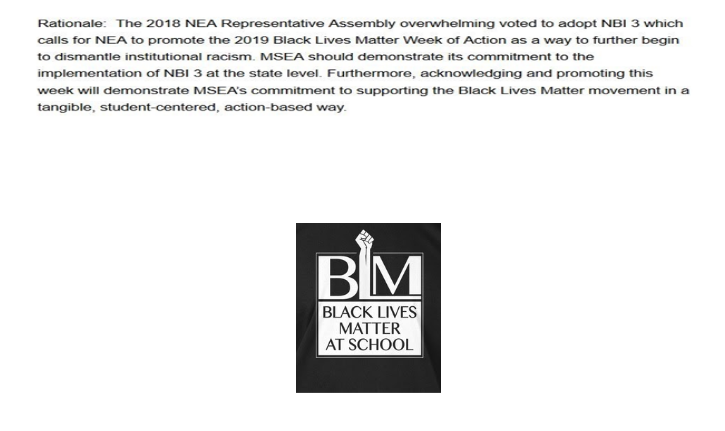 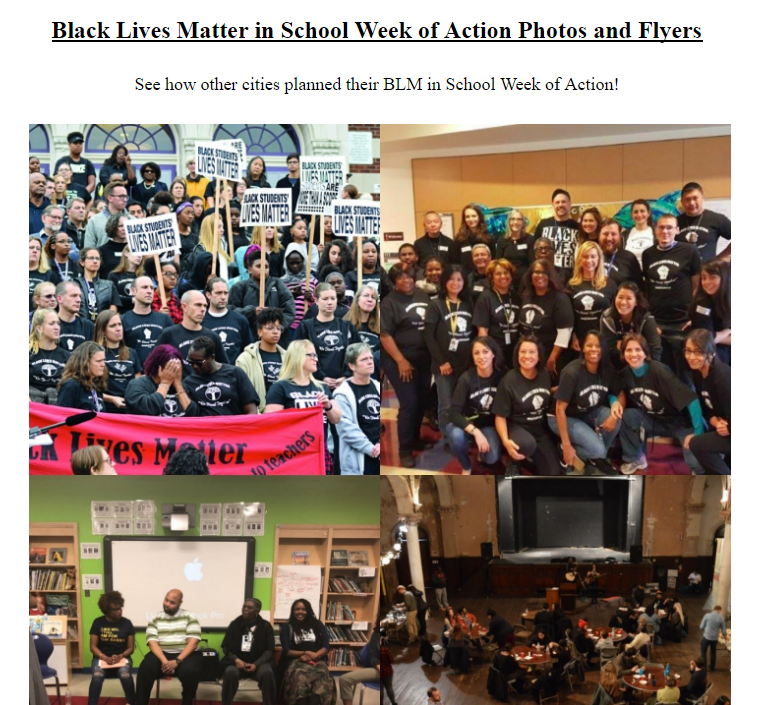 What you do NOT see, is diversity of opinion. This appears to be adult activists indoctrinating youth into Marxist tactics. 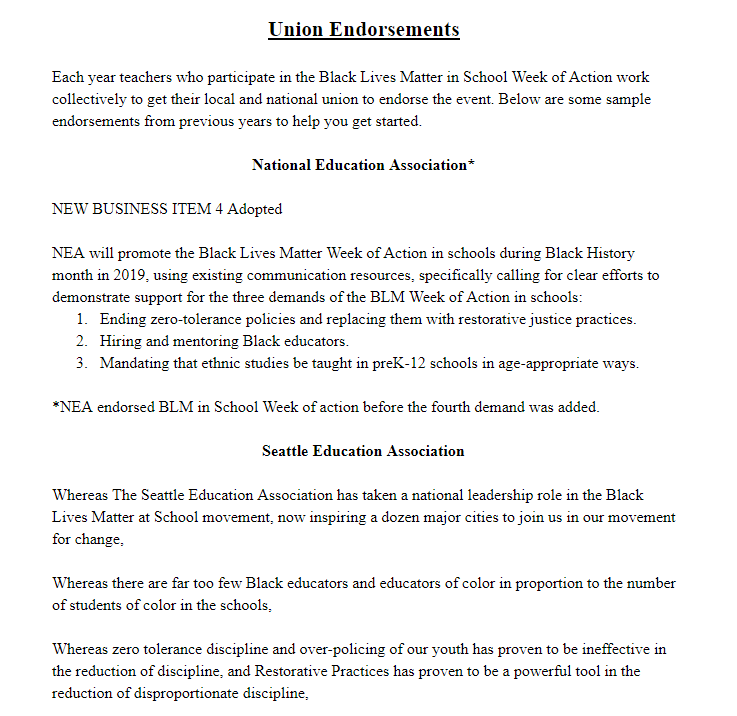 Almost every single teachers union nationwide is on board with this, and these same unions all identify as Democrats.

As you can see, this has been planned for a LONG time. They want this instituted across the board in every school. And they want it federally mandated.

I tried to track down contact information and I was led to a website called “DC Area Educators for Social Justice.” 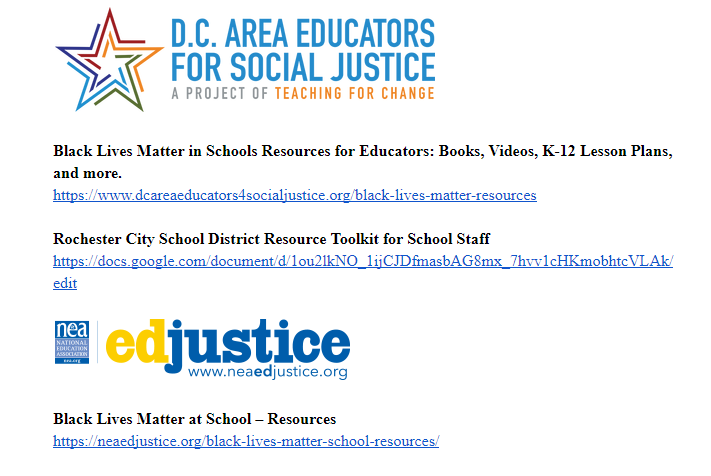 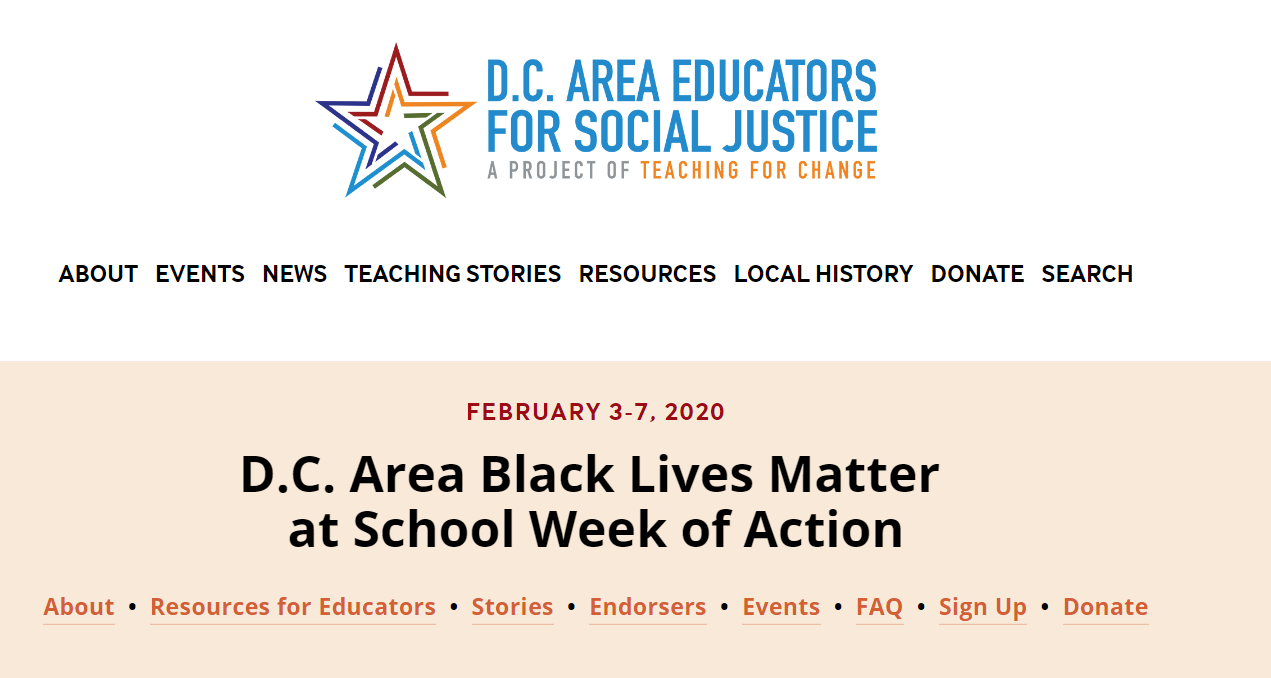 This website in turn led me to ANOTHER organization called “Teaching for Change.” Does that sound at all similar to Barack Obama’s “Hope and Change” rhetoric? 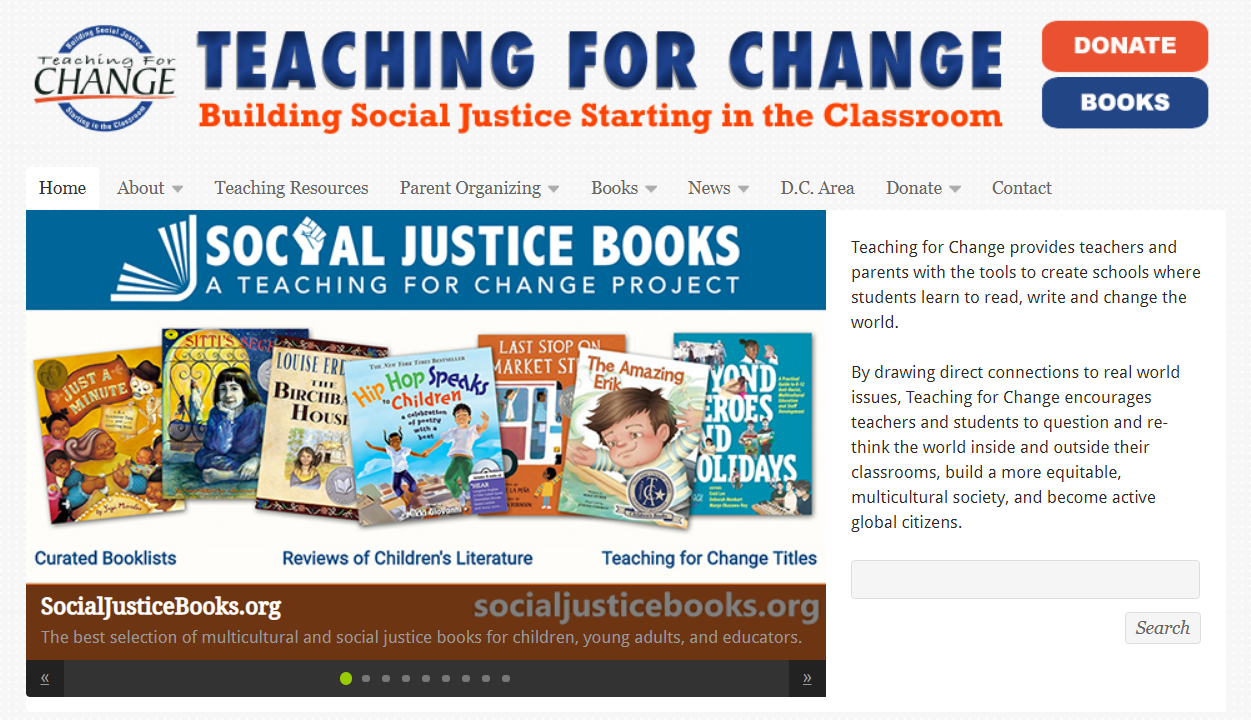 As you can see, the website prominently displays a communist fist, and shows socialist propaganda books for children. There is no discussion of the facts that communism and socialism used the power of the state with its monopoly on force, to persecute their political enemies, and murder millions of their own citizens.

There are Holocaust awareness programs in schools, and lots of education about Nazism, but nothing about Pol Pot, or Mao or the evils of Stalin. This type of propagandizing is not education, it does not encourage critical thinking, or individuality. It is extremely divisive and it’s morally repugnant to a free and open society. 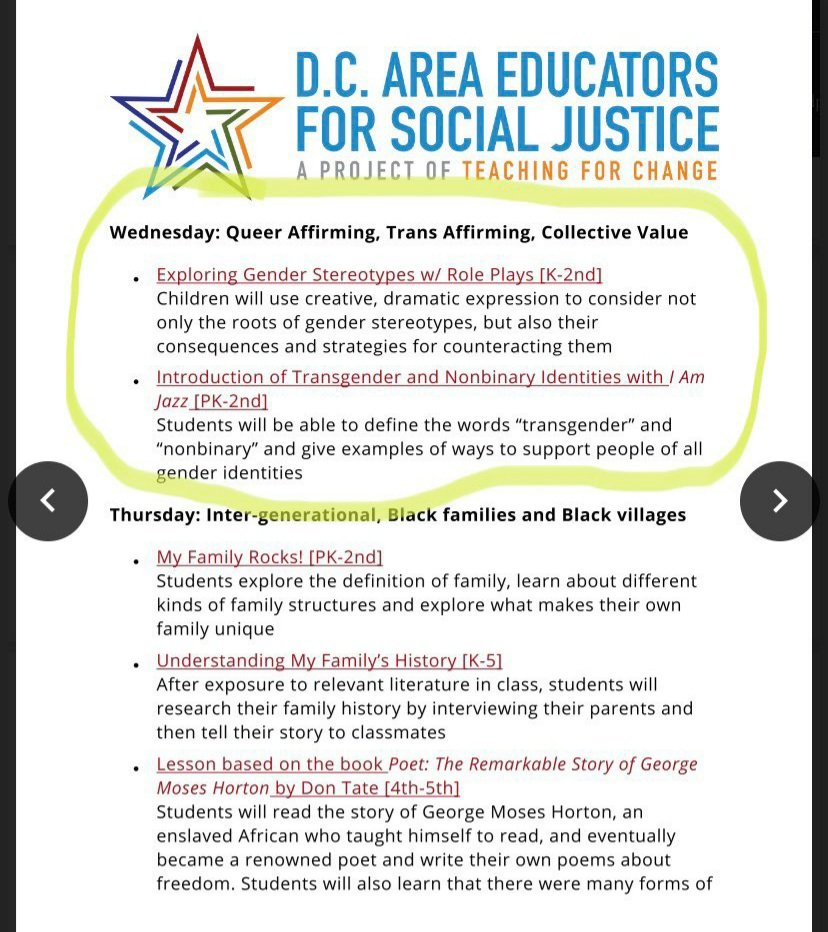 Please look at the following VERY carefully, because if we do not pushed back on this, it will be taught to our kids: 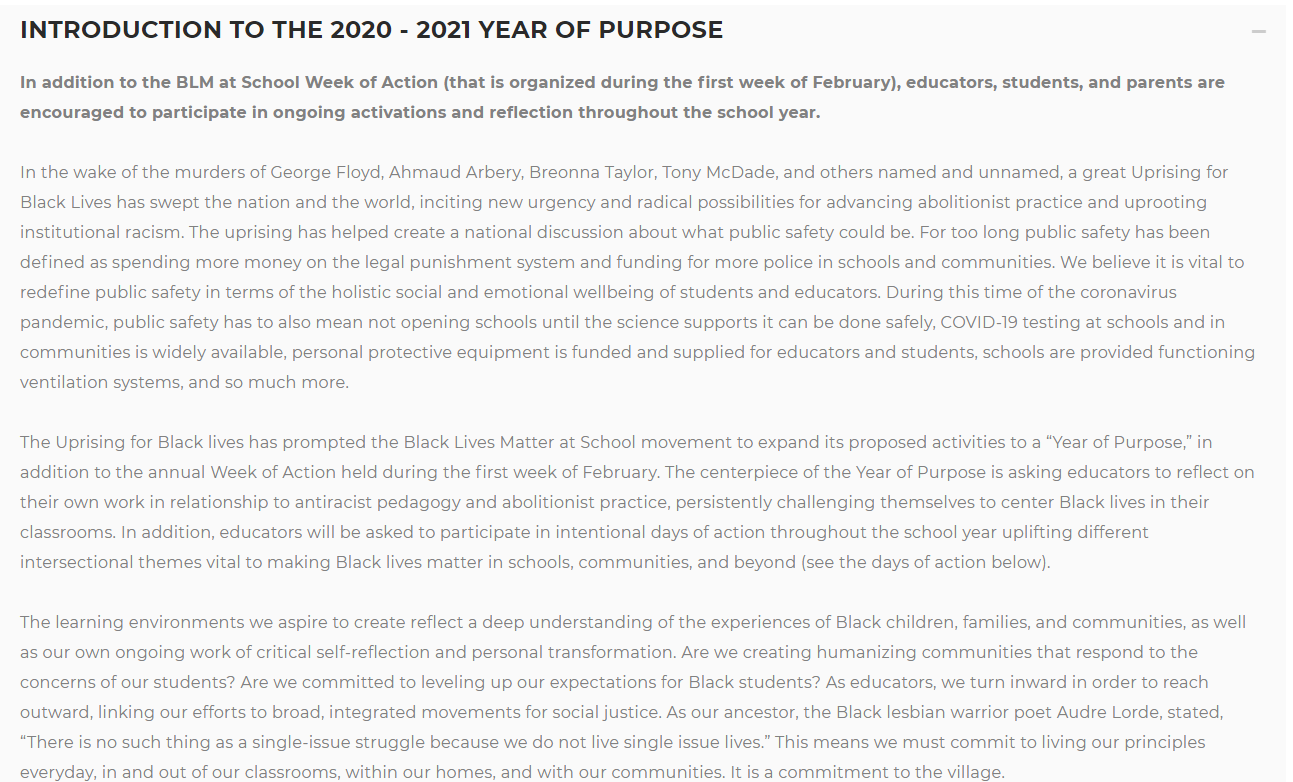 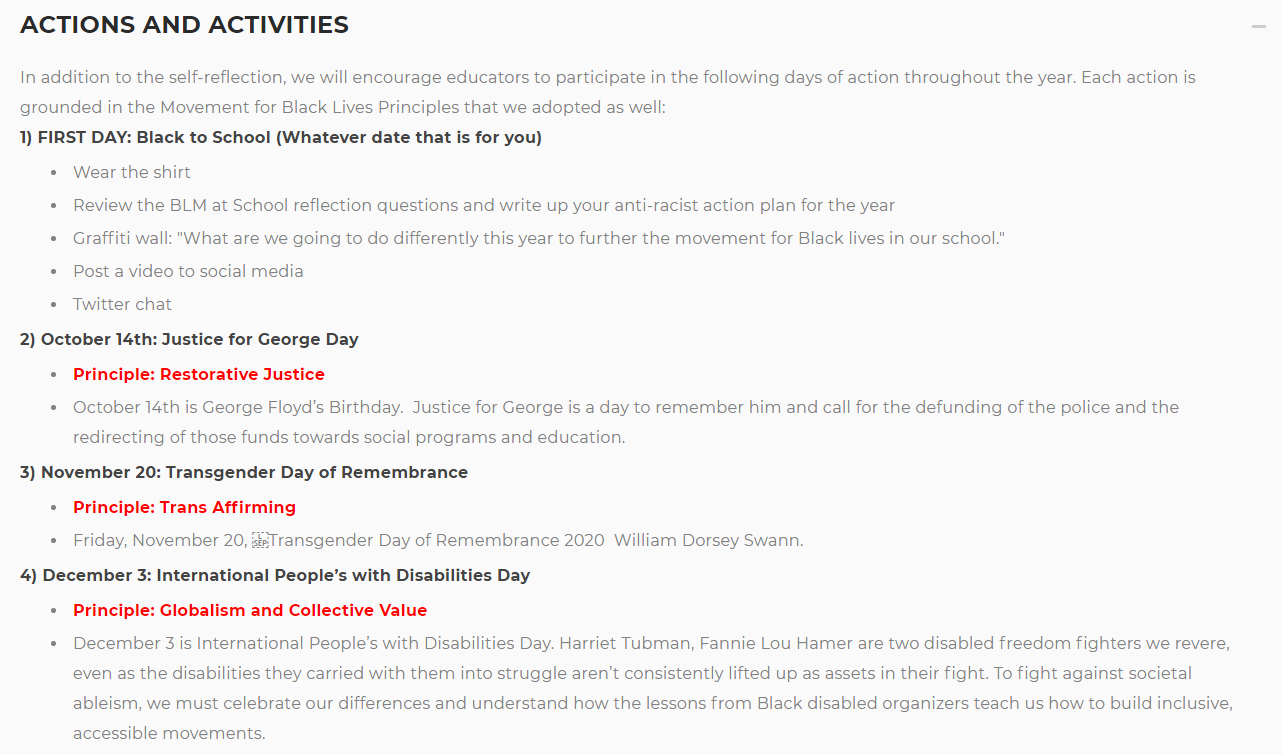 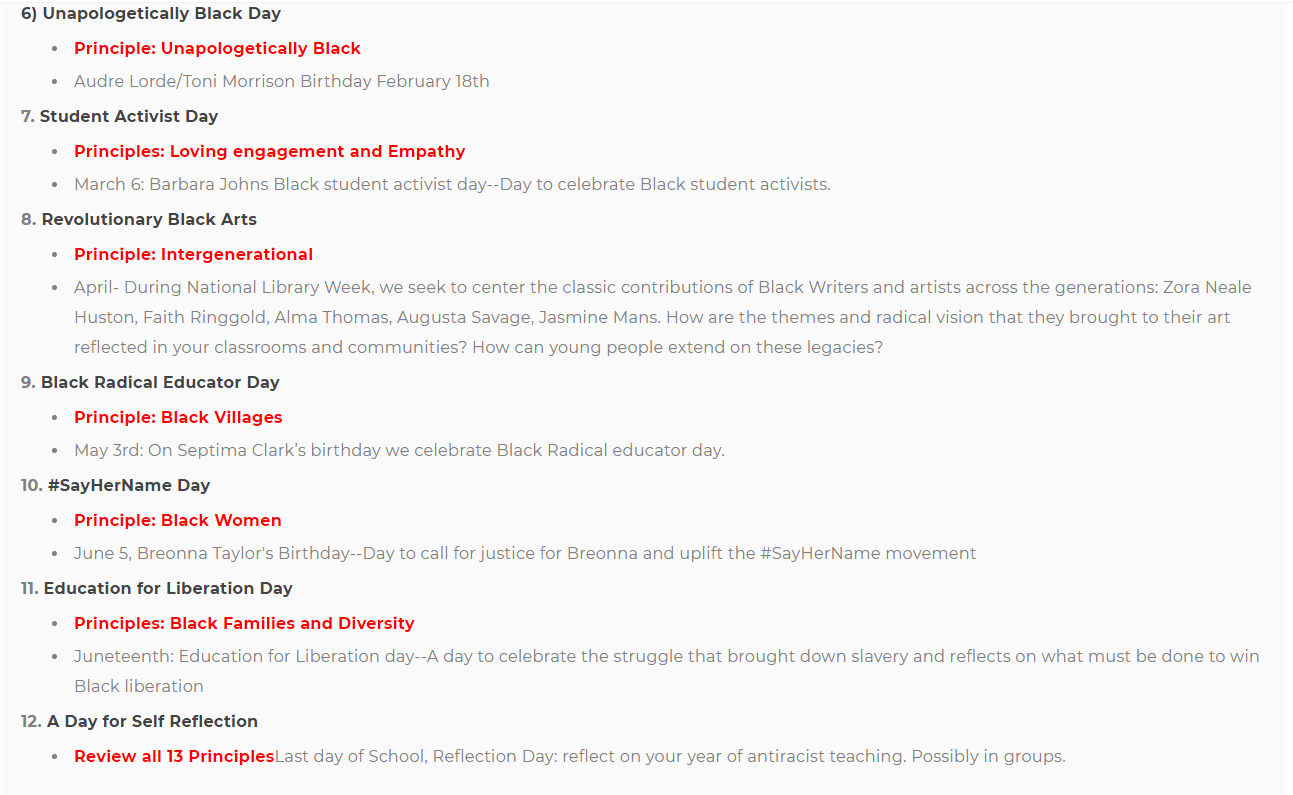 What is a “black radical educator” and why should this be something that should be mandated as a school holiday? As you can see, there are no celebration days of Hispanic, Asian or White people. This is Black Nationalism being paraded as “social justice.”

Mirroring communist curriculum, it will exacerbate racial tensions in schools and society in general. It makes EVERYTHING racial, it sees everything through a racist lens. We must push back against this.

What is so truly pitiful in the most profound philosophical sense is the strict collectivists have no regard whatsoever for the black race, regard them rather like the untermenschen of the Nazis and the “ni–ers” of the slaver owners. Many people do not seem to be able to grasp that despite their flowery language about “racial equity”  and “diversity” they view black Americans as cannon fodder in their sick game of “clash of civilization.”

We have all seen what happens to a generation of college kids who need safe spaces, and get riled up against anything when they feel the least bit “slighted.” It is ignorant and anti-American. It prevents national unity, and devastatingly, it makes people feel like they can never succeed.

And finally, it is dis-empowering and specifically designed to teach children to participate in the destruction of America from within. Contact your schools, congressmen and senators today and let them know you are not going to accept this type of child abuse in the school system.