April 20, 2020 – With the Coronavirus “pandemic” effecting all aspects of our lives, and the mainstream media presenting a parade of “experts and authorities” and university “modeling,” it is a good time to remind our readers of the infiltration of intelligence agencies into the halls of academia. 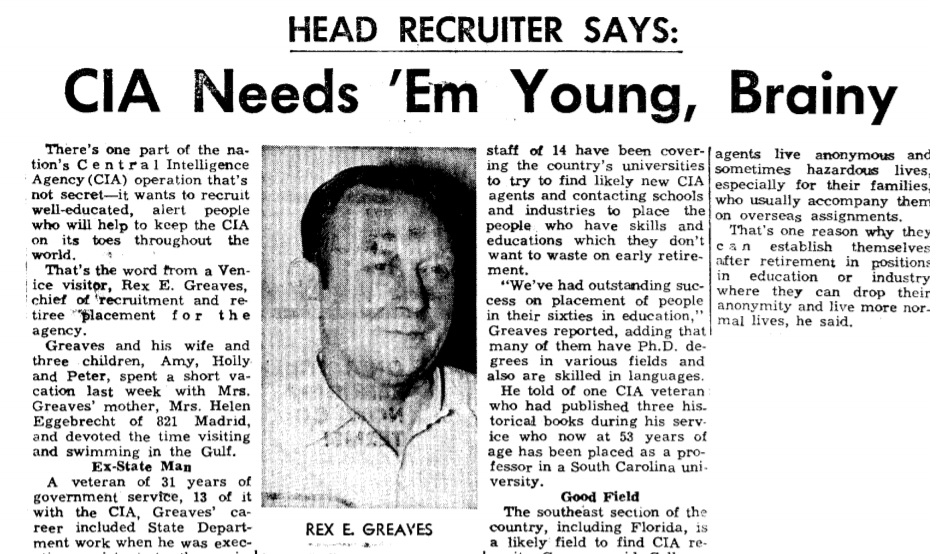 Not only have they been recruiting from these American college campuses for decades, they have also been infiltrating journalism and publishing. This allows them unprecedented power over the minds of the American public and students of all ages.

MuckRock exposes the “Honorary Degree” given to fascist spymaster Allen Dulles, former Director of the CIA, in 1961:

From the CIA “Reading Room” itself:

This describes “OPERATION CHAOS” which involved clandestine domestic operations, in violation of the CIA’s own charter, which forbids any operations on American soil, or directed against the American public. 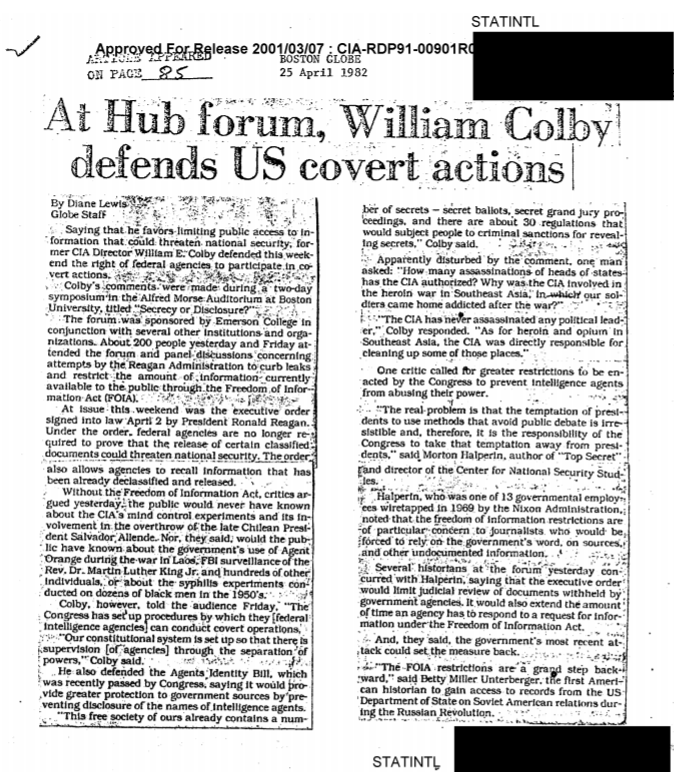 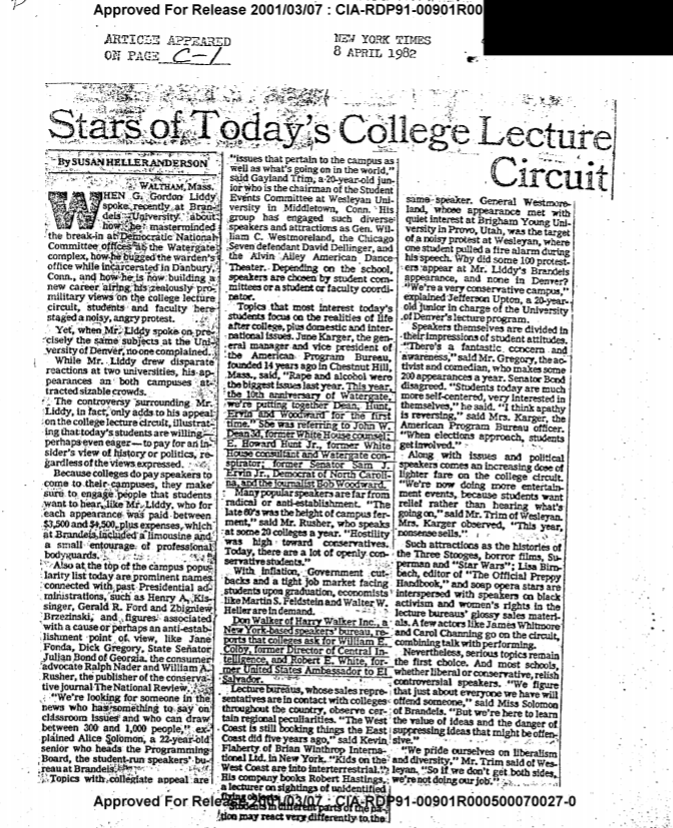 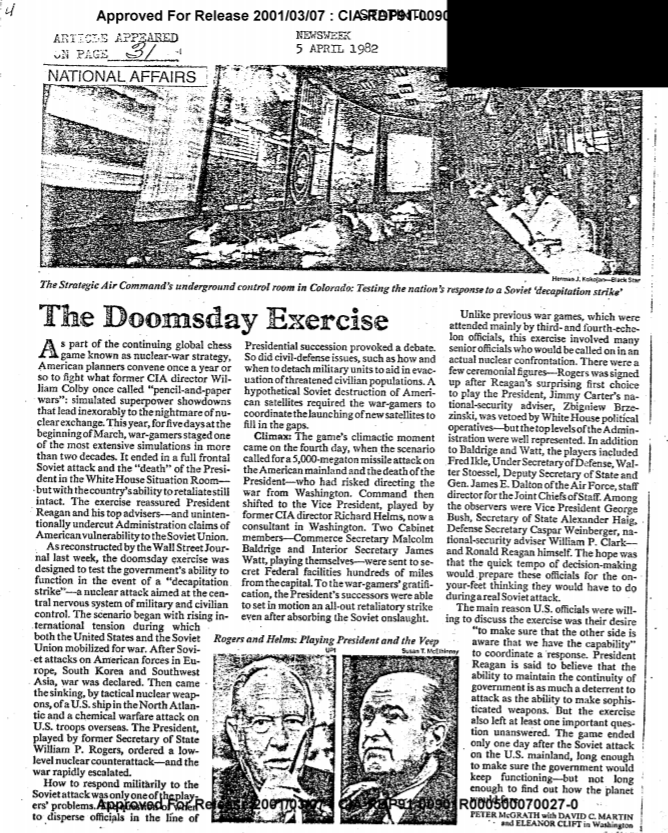 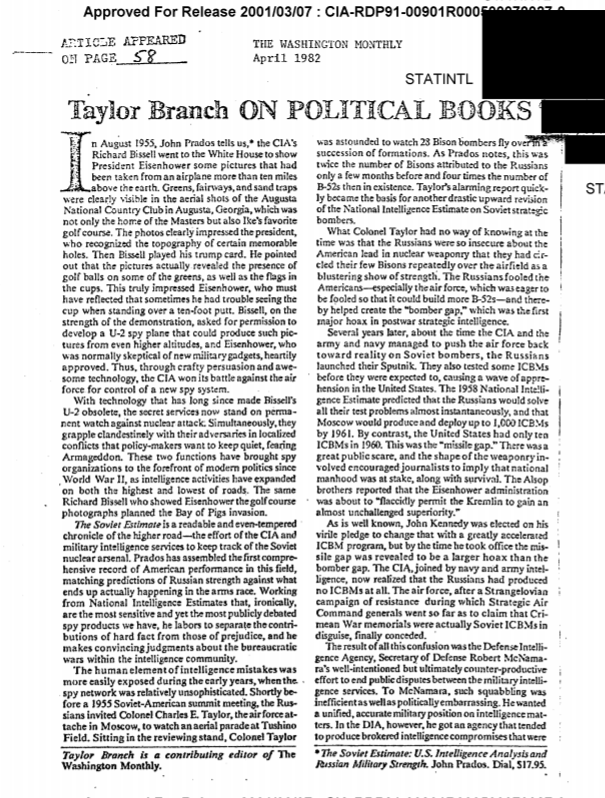 The CIA claimed they were going to “reverse” their policy on ties to academia, but the evidence shows the exact opposite occurred.

According to an April 25, 1973 article entitled “C.I.A. in Cambridge,” the covert activities of the CIA were starting to upset students: 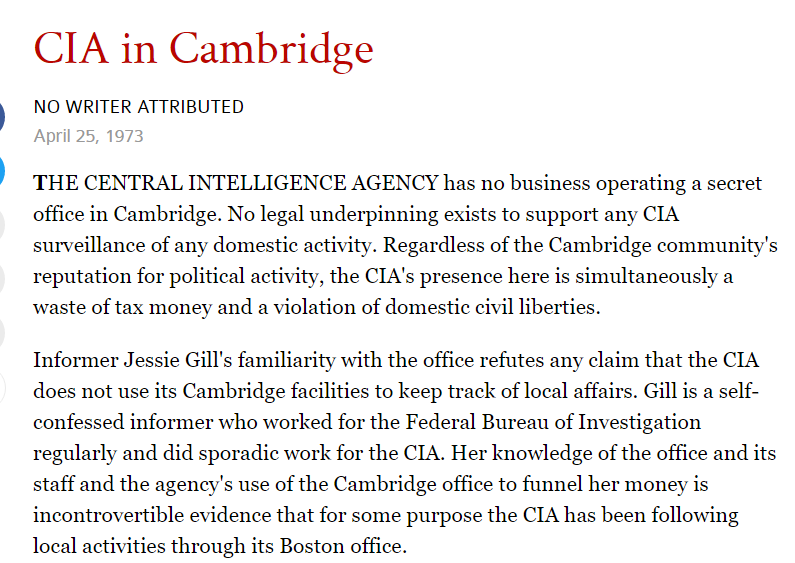 This only got worse. As Joseph L. Contreras notes in a September 28, 1977 article entitled “CIA Papers Link Harvard to Mind Control Project,” the Central Intelligence Agency was still in violation of their mandate and charter, and becoming more sophisticated at obscuring the fact. 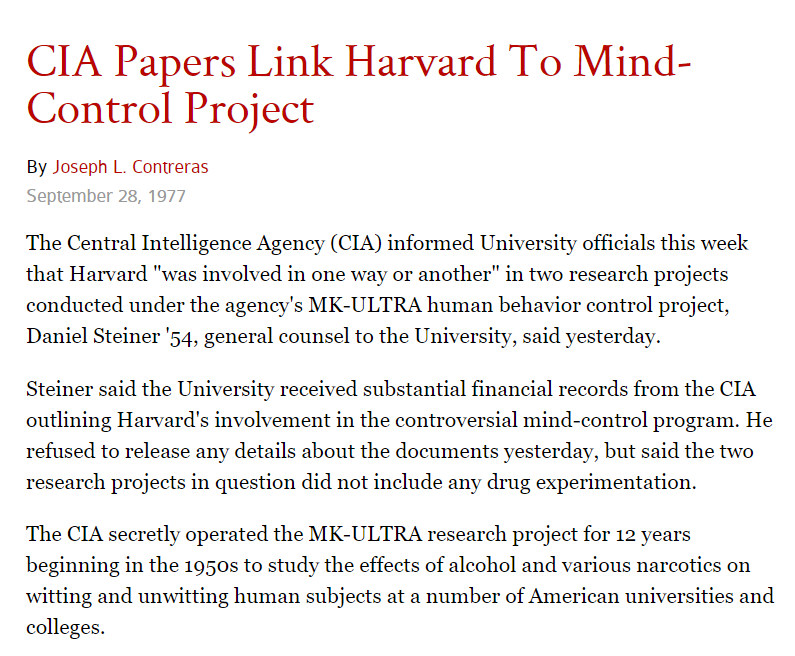 The CIA also sponsored an analyst’s independent research into Nuclear Proliferation at the Massachusetts Institute of Technology (MIT): 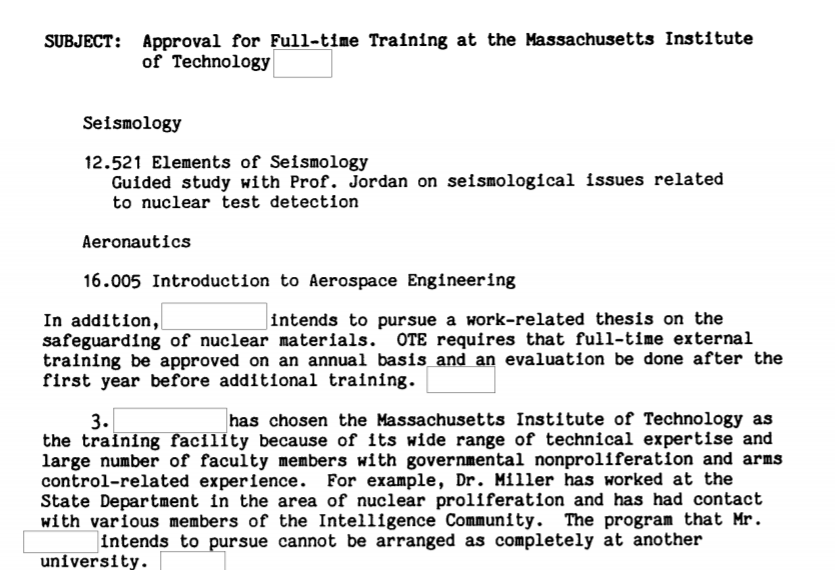 This shows just how deeply they were operating on American college campuses in the 1960s.

Do we know if this activity is still taking place on American universities to this day? The answer of course is yes. A May 8, 2000 article by Valerie Strauss from the Los Angeles Times entitled “Top Secret Teachers? CIA Agents in Demand on College Campuses,“ describes a more recent example:

A smartly dressed man named Joe whose parents don’t know what he does for a living riveted a University of Maryland class recently with tales about U.S. government secrets. Joe, the guest lecturer in a course called ‘Legal Issues in Managing Information,’ works for the CIA. So does the course’s instructor, whose full name can be published.

At George Washington University in Washington, D.C., another CIA employee teaches a course on competitive intelligence in business. And the same thing is happening at nearby Georgetown University.

Intelligence is flourishing as a new academic discipline at hundreds of colleges across the country. Only a small fraction of the instructors are CIA employees, but many others have worked in government intelligence or diplomacy of some kind and have fashioned courses based on that service.

Their skills mesh perfectly with the business world’s increased emphasis on information management and how distinguishing good information from bad information affects the bottom line. Indeed, the typical student in an intelligence course is not a wannabe spy but an aspiring business executive, systems analyst or librarian. – The Los Angeles Times

The article describes this as happening in college campuses all across America. The implications of course are grave.

Verne Lyon of Covert Action Information Bulletin wrote in the summer of 1990 about these very serious issues of CIA penetration into publishing, news and academia:

According to an unpublished report by Mae Brussell, this CIA penetration went far beyond domestic spying to include mind control programs like MK Ultra being done via medical training schools on college campuses and spreading into American culture.

In September of 2017, Lew Rockwell published an exposé entitled “CIA’s Plans to Infiltrate Academia and Change University/College Curriculum” that describes how techniques the CIA created and perfected in the 1960s and 1970s are now being implemented across the board. It is worth noting the language of Executive Order 12333, implemented in 1981 and intended to curb the CIA back to its original mission of operations outside of the U.S.* 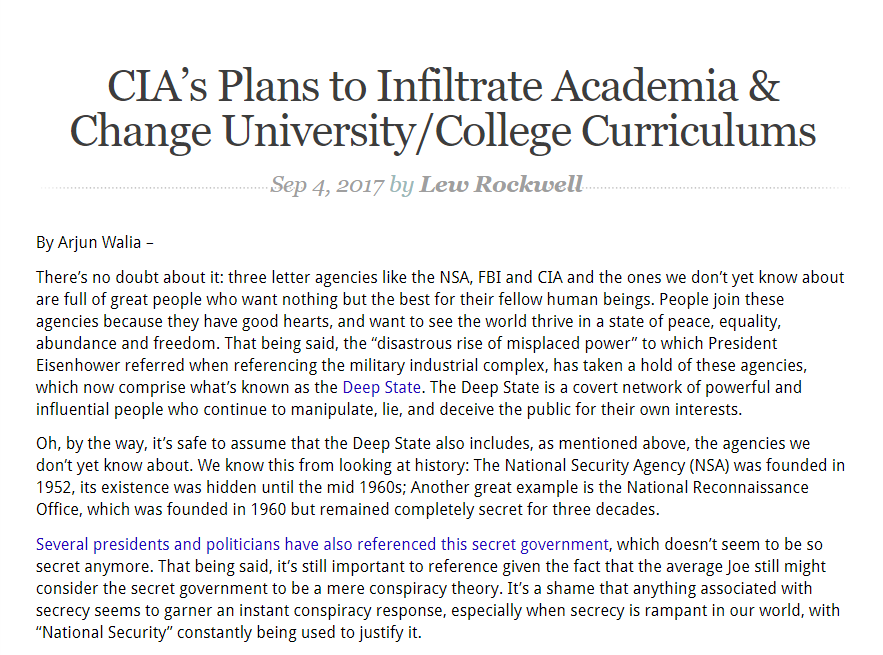 This describes a new effort being rolled out under the pretext of “National Security” which is always the excuse used for excess secrecy and unconstitutional expansion of these agencies.

A CIA document from the Reading Room was declassified in May 2010, detailing the agency’s stranglehold and showing control over academia and mainstream media: 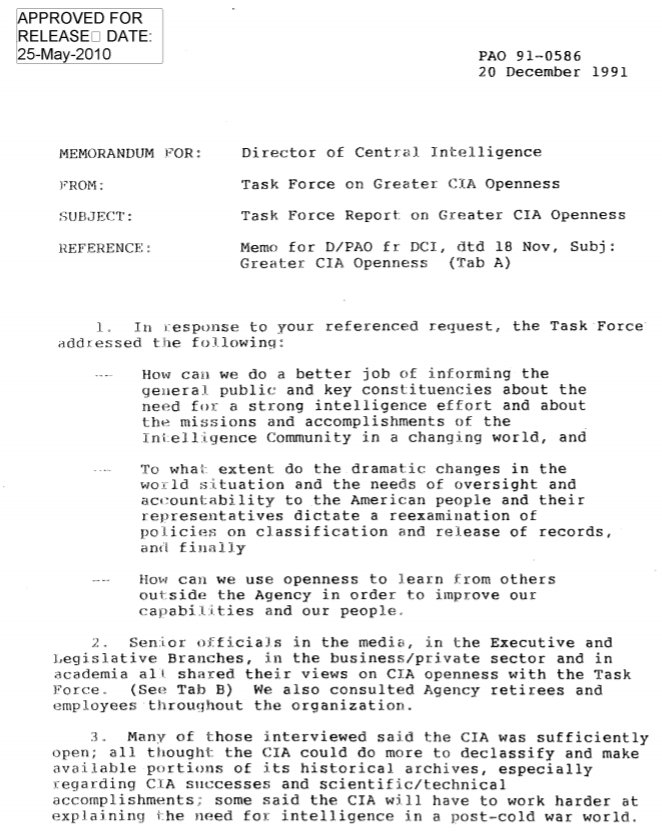 The subject memo, “Task Force Report on Greater CIA Openness” documents that the CIA has “relationships with reporters from every major wire service, newspaper, news weekly, and television network in the nation.”

Moreover, this document claims, “this has helped us turn some ‘intelligence failure’ stories into ‘intelligence success’ stories, and has contributed to the accuracy of countless others.” As if that statement were not Orwellian enough, it further claims “the agency has persuaded reporters to postpone, change, hold, or even scrap stories that could have adversely effected ‘National Security’ interests or jeopardized sources and methods.”

We then have a more recent article about the then-newly published book “Spy Schools: How the CIA, FBI and Foreign Intelligence Secretly Exploit America’s Universities” written by author Daniel Golden. This article, “The CIA within Academe” describes the book’s main premise: 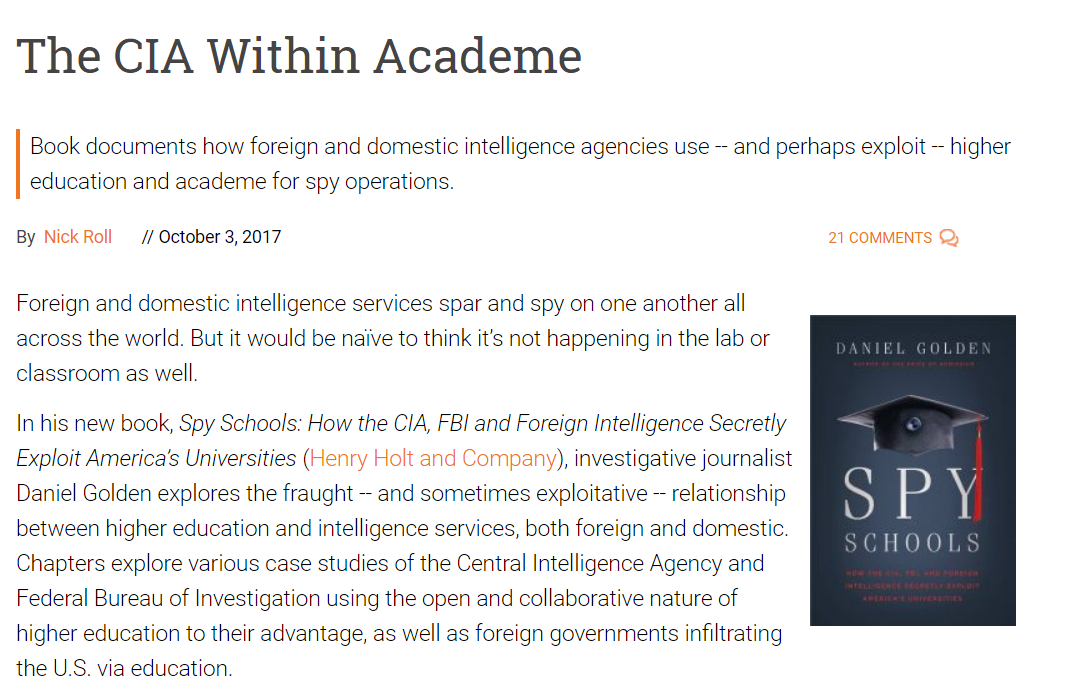 The book describes not only domestic spying operations on college campuses in America, but increasingly foreign ones as well.

The CIA also is involved in the medical and medical research fields, as MK Ultra exposed. CounterPunch published an article about the CIA’s interest in vaccination programs and vaccines back in 2014: 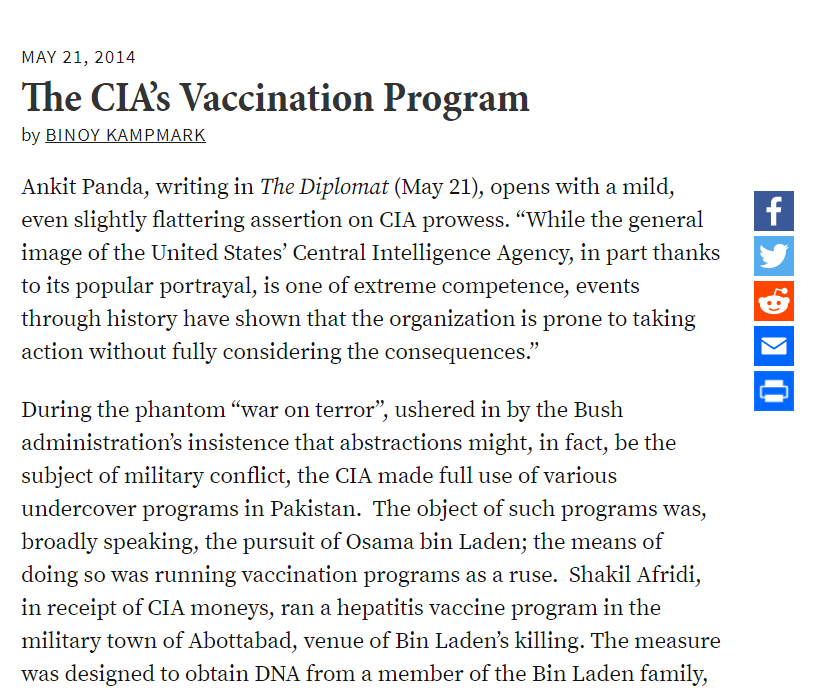 It is no surprise then that the cure for the Coronavirus “pandemic” being pushed by “university and academic models” and “expert opinions” and being parroted by the mainstream media is, of course, a vaccine. This should concern every single American.

The CIA very clearly infiltrated academia and the media a long time ago. Through their access to these Ivy League universities, they were then able to expand their reach into the pharmaceutical and technological areas by offering “research grants” and “venture capital.”

If the CIA is funding Silicon Valley tech companies, as well as the scientific establishment and recruiting agents from leading schools, how can we trust their “models” and “recommendations?” And this is but a brief introduction to this topic. There is so much more to this story.

From the Commission on CIA Activities within the United States, Chapter 11: Special Operations Group, “Operation CHAOS.”  This goes into much greater detail surrounding Operation CHAOS.

From the Church Committee: “CIA Intelligence Collection About Americans” that details Operations MERRIMAC, CHAOS and RESISTANCE, among many others.

Intelligence Activities and the Right’s of Americans:

Science of Spying: Secrets of the CIA