July 23, 2020 – First Lady Melania Trump held a press conference on the Task Force on Protecting Native American Children Briefing. The task force was created last year to look into where the Indian Health Service needs to improve protections for children. Melania spoke with members of HHS, representatives of the Navajo Nation, and agents of the FBI to discuss issues of concern. The task force is also charged with investigating allegations of sexual abuse.

President Donald Trump has made human trafficking and crimes against children a major part of his platform. From the breakup of Backpage.com, one of the largest online trafficking websites, to the takedown of sex cult NXIVM and Jeffrey Epstein, the Trump administration has sent a message to child abusers: your time is up.

Melania appeared with Kellyanne Conway for the Task Force Briefing. 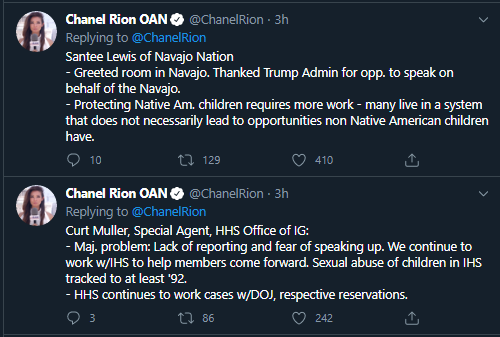 Today, First Lady Melania Trump announced she is planning a trip to the Cherokee Nation. We appreciate @USAttyShores's leadership on this issue. Wado. pic.twitter.com/JpIv975C4O

After meeting representatives of the Navajo Nation, the First Lady has announced a visit to the Cherokee Nation in Tahlequah, Oklahoma.

Here is a link to the full video below, the Briefing begin around the 19:44 minute mark:

This story is still developing.