Indianapolis – April 27, 2020 – In the sunshine of the Rose Garden, President Donald Trump opened today’s press briefing praising the American people for the consistent decline in cases across major cities in the United States. “Things are moving along,” POTUS said.

Trump spoke about all the families that have lost loved ones during this battle with this invisible virus. “We grieve by their side as one family. This great American family and we do grieve.” He also seemed rather optimistic about the country opening back up. “There is a hunger for getting our country back to work.”

POTUS updated the testing numbers reporting,“The United States has conducted more than 5.4 million coronavirus tests, more than double than any other country.” He said he’s confident there’s enough testing capacity in the United States for re-opening, “The testing is not going to be a problem at all,” he added.

Adam Schechter of LabCorp stated that 45 days ago, LabCorp could only complete 2,000 tests per day now they have ramped up their testing to 6,000 tests a day. He also ensured that at-home test kits are available with no upfront cost to the consumer.

John Nims of US Cotton stated his Cleveland operation has pivoted from Q-tips to coronavirus testing swabs.

Larry Merlo of CVS commended his workers for all the test sites up and running around the United States and in May, they will have testing available in 1,000 store sites.

Richard Ashworth of Walgreens announced they will expand testing across all states and will triple testing availability to consumers.

Rodney McMullen of Kroger noted their companies testing will go from 6 to 12 states. “Together we will win, together America is great,” he added.

Doug McMillon of Walmart stated by the end of May, Walmart will have COVID-19 testing at 100 stores.

Heyward Donigan of Rite Aid mentioned her stores are doing 1,500 tests per day and will be expanding that capability.

Dr. Birx introduced the core elements of the testing blueprint for Opening Up America Again. The slide below was read and explained in depth by Dr. Birx.

Admiral Brett Giroir also spoke on the new 8-part plan to touched on by Dr. Birx and he explained the slide below. 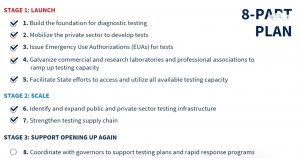 “The United States has acquired a sufficient supply of swabs for testing. Interdisciplinary teams are meeting regularly to ensure the country is fully equipped with supplies and tests. Bringing together hospitals and labs to ensure max communication and collaboration,” Admiral Giroir explained.

After all remarks, President Trump opened the floor to questions from the media.

Full transcript of today’s briefing can be found here

The United States has conducted more than 5.4 MILLION Coronavirus tests—nearly twice as many as any other country. pic.twitter.com/QruwdWbBAj

We continue to see encouraging signs of progress in our country's major cities and hotspots. pic.twitter.com/nahs4NnE9K

As one American family, we grieve with those who have suffered the loss of loved ones. pic.twitter.com/qhoX0OP0Ol

"We're doing everything in our power to heal the sick and to gradually reopen our Nation." pic.twitter.com/xEapbkT6hd

Thanks to incredible cooperation between government and the private sector, we've taken the lead in testing worldwide. pic.twitter.com/ntTF6moHPa