Indianapolis – April 19, 2020 – President Donald Trump opened today’s daily Coronavirus press briefing with the announcement that the Republicans are getting close to a bi-parisian deal with the Democrats on another relief bill. “There may be a resolution tomorrow,” Trump said. “I just got off with the phone with Secretary of the Treasury Steven Mnuchin and we have some very nice negotiations going on right now,” Trump added.

The president announced that tomorrow, Vice President Pence will lead a call with the nation’s governors from the FEMA headquarters on developing new testing strategies. “Some of the governors are doing a better job than others,” Trump remarked. It was mentioned last week by POTUS that he was going to leave the decision up to each individual governor as to when they would re-open their state. “The governors wanted to have total control over the opening of their states, but now they want the federal government to have control of the COVID-19 testing,” Trump said. “They can’t have it both ways.” 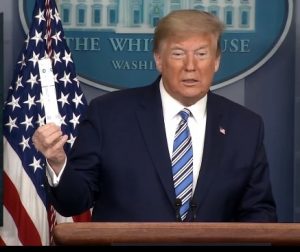 Trump mentioned he will again be calling on the Defense Production Act to obtain more testing swabs from an unnamed manufacturer. He pulled out of his coat pocket, the swab that is now being used to test for the Wuhan virus and he compared the size of the new swab to the size of a Q-tip.

President Trump praised the American people after seeing the new data regarding the number of active cases of COVID-19 in the United States. According to POTUS, there’s a declining trajectory in new cases in “hotspots” like Seattle, Detroit, New Orleans, Indianapolis and Houston areas. He points out that is more evidence that the Administration’s aggressive strategy is working. “The American people have done a hell of a job. We’re saving countless lives and millions of people would have died, if the federal government hadn’t imposed Social Distancing guidelines and closures,” Trump noted. It’s worth noting that the Centers for Medicare and Medicaid Services (CMS) will be finalizing new guidelines for doctors and patients to resume elective surgeries.

In addition to the Task Force data showing there’s a decline trajectory, just in case there is a spike, the United States is all set for hospital beds.“It looks like we’re totally covered on beds,” according to POTUS. “I want to thank New York Governor Andrew Cuomo; he’s worked very well with us.”

"What the federal government did, working with states… was a PHENOMENAL accomplishment."

"…These were just extraordinary efforts & acts of mobilization, & the federal government stepped up and was a great partner… We needed help & they were there."

Before ending his remarks, President Trump reminded everyone,“Why do we need a supply chain?” he questioned. “It’s very simple. Make your parts here. We learned a good lesson.” he answered. Concluding his remarks, the president handed off to Vice President Pence, and returned to the podium to participate in the Q/A portion of the briefing.

Vice President Pence reported that 68,000 Americans have recovered from the virus, but sadly more than 40,000 Americans have lost their lives to Wuhanvirus. “A number of large metro areas either pased their COVID-19 peak or are stable, but they are watching with caution virus outbreaks in the Boston, Chicago and Philadelphia metro areas,” Pence added.

Pence was also proud to report on the production of ventilators and according to his report, there will be another 500 ventilators will be added to the strategic stockpile from new production.

As President Trump referenced during his remarks, Pence also spoke about tomorrow’s conference call with governors and state health officials. The topic will be where supplies and equipment is available in their states and also to explain the Defense Production Act situation on swabs.

Administrator Verma stated that the administration has now asked hospitals and doctors to delay elective surgeries and procedures, even though hospitals are reporting unused capacity. Speaking on the gradual return to elective medical services that have been paused, Verma said “Not a light switch, but more like a sunrise.”

“Today, we are announcing we are requiring nursing homes to report to patients and their families if there are cases of COVID-19 and to report directly to CDC,” Verma added.

President Trump rejoined the briefing to answer questions from the press.

Vice President @Mike_Pence will lead a call with our Nation's governors to help develop tailored strategies for their states. pic.twitter.com/2o298IbdgU

We continue to see a decline in new cases in hotspots around the country.

Thank you to the American people for your strong efforts to slow the spread! pic.twitter.com/22fNsD7KSi

"It's amazing, the spirit of this country." 🇺🇸 pic.twitter.com/Nk45finFsH

We've launched an unprecedented effort to accelerate the development of treatments and therapies to treat and defend against Coronavirus. pic.twitter.com/Cr09Kw2aKS

Addendum: Your faithful correspondent had a welcome day off yesterday. Here is the official White House Transcript for your perusal.