President Trump set the tone for the presentation of information to be covered in this briefing. “Our Country is in the midst of a great national trial unlike any we have ever faced before.  You all see it. You see it probably better than most,” he said. “We’re at war with a deadly virus. Our success in this fight will require the full measure of our strength, love and devotion.” The president stressed how important it is to follow those now familiar guidelines which have just been extended to April 30, adding, “It’s a matter of life and death.” 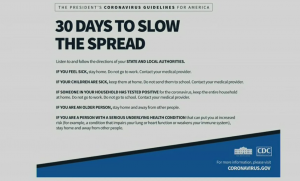 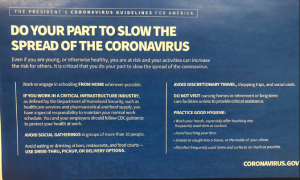 During his remarks, President Trump was very clear about course of this virus over the upcoming weeks saying, “We are going to go through a very tough two weeks,” he said. “This is going to be a painful, very, very painful two weeks.” He added that “this is the time for all Americans to come together.” After talking about this expected difficult road ahead, Trump was quick to praise healthcare workers: “Their bravery is incredible. You people are just incredible.”

POTUS reported that “FEMA is supplying 250 ambulances and 500 EMTs to New York.” Along with sending ventilators to New York, Trump also mentioned ventilators being sent to Michigan, but no particular number was given.

Dr. Birx took the podium with a presentation explaining the data of social distancing impact that has been collected to date. Both she and Dr Fauci have indicated that the goal of mitigation is absolutely critical to reducing the mortality from the virus. As she has stated before, Dr. Birx advised: “There is no magic bullet. No magic vaccine or therapy. It’s just behavior.”

Dr. Fauci commented on Dr. Birx’s presentation and stated “We’re going to continue to see things go up. We cannot be discouraged by that. The mitigation is working and will work.” He also added “Our goal, which I think we can accomplish, is to get New York and other hot spots to get around that curve.”

Vice President Pence spoke to how closely he and President Trump are working with the governors, naming Illinois, Louisiana, Michigan, New York and other potential hot spot states. According to Pence, 29 states have been given State of Emergency Status, with 10 states being given full access to the National Guard.

The vice president reported that “more than 1.1 million tests have been completed around the country.” Pence added to POTUS’ comment earlier regarding ventilators: “8,100 ventilators have been sent around the nation. Airlifts of supplies are being sent to New York, Louisiana and Ohio tomorrow.” As did the president, Pence spoke so highly of the healthcare professionals on the front lines. “Help is on the way. We’re gonna leave no stone unturned to make sure you have the resources and equipment to do your job,” he added.

In response to a question about the supply of ventilators, the president described how the supply was being managed, directly from the new manufacturers to the end user hospitals. Currently there are about 10,000 ventilators in the Federal stockpile, on hand and ready for immediate shipment to the next hot spot. The supply will increase as new ventilators come online.  As the curve of cases rises, the states will be receiving them almost overnight and in another new innovation, will come direct from manufacturer to hospitals to save time. For now, the president said, “we will hold them back,” to be available if a breakout occurs in any of our densely populated major metro areas.

~~ Editor’s Note:  It is this editor’s opinion that this press conference was pivotal given the information and direction of what the president calls a ‘war against an unseen enemy.’ We highly recommend viewing the video that follows for detail and full exploration of the informative charts and of the questions that followed.

UPDATE: The full Transcript of the March 31, 2020 press conference can be found here.  It is well worth the close read to appreciate the scope of what is to come. ~~ Ed.

Our country is in the midst of a national trial—and success will require the full measure of our strength, love, and devotion. pic.twitter.com/zIccadVq8U

15 days ago we published our nationwide guidelines to slow the spread of the Coronavirus.

President Trump has extended these guidelines through April 30. pic.twitter.com/ZC6deS7A04

“We pray for the doctors and the nurses, for the paramedics and the truck drivers, and the police officers and the sanitation workers, and above all, the people fighting for their lives in New York and all across our land.” — President @realDonaldTrump pic.twitter.com/nTuDWLozcG

Dr. Fauci: "The reason why we feel so strongly about the necessity of the additional 30 days is that now is the time, whenever you're having an effect, not to take your foot off the accelerator." pic.twitter.com/WiJHG9f79L

"There are difficult days ahead," Vice President @Mike_Pence said.

It's more important now than ever for all Americans to put the Coronavirus guidelines into practice. pic.twitter.com/wqaaroDF2d

We are continuing to work closely with Governors across the Country as we respond to the Coronavirus together as a Nation. The health of the American people is our top priority. pic.twitter.com/QN67WD6bbY