April 12, 2022, FAIRFAX COUNTY, VA — The 50-million-dollar defamation lawsuit between actors Johnny Depp and Amber Heard is now underway in Fairfax County, Virginia in Depp vs Heard. Jury selection was completed yesterday and today trial began with the lawyers providing opening statements to the jury. Each accused the other side of lies, defamation and abuse. The case stems from a December, 2018 opinion piece that Amber wrote that was published in the Washington Post.

You can find every single document stemming from all of their legal disputes, from their divorce to the defamation case, all compiled and labeled here. You can find the documents from the UK case there as well.

The trial could last at least six weeks, with over 100 witnesses who may testify, and both Depp and Heard may take the stand as well. Depp met Heard during the shooting of the film “The Rum Diaries” in 2009. The former co-stars began dating each other in 2012 and were married three years later.

Around the time of Heard’s blockbuster film Aquaman’s release in May of 2016, police were called to the couple’s Los Angeles home responding to an alleged domestic dispute. The Los Angeles Police Department concluded that there was no evidence of a crime. A few days after that, Amber Heard filed for divorce and a restraining order, having accused Depp of “repeated” domestic violence. Depp’s representatives denied these allegations, but Heard was granted a temporary restraining order.

The bitter feud between the two played out in the public, with both parties slinging accusations at each other. Before the hearing on the restraining order, the couple ended their divorce, settled for a reported 7 million dollars. Heard dropped the restraining order, and she and Depp released a joint statement claiming that: “Our relationship was intensely passionate and at times volatile, but always bound by love. Neither party has made false accusations for financial gain. There was never any intent of physical or emotional harm.”

Then in 2018, Heard published the op-ed in the Washington Post, alleging domestic violence, which Depp claimed was defamatory and caused him harm to his career. Heard claimed that Depp repeatedly abused her.

With the current trial underway, it might be worth looking at some of the more disturbing and bizarre information and allegations that have come to light, specifically as it related to Ms. Heard:

Apparently Amber Heard has a history of abuse and domestic violence. In 2009, she allegedly hit her girlfriend at the time. She also allegedly beat up her sister Whitney. Depp’s prior two long-term partners have said he never once got physical with them. None of his prior girlfriends have come forward to say that Johnny ever beat them.

These reports paints a very disturbing picture of Amber Heard.

Amber Heard complaining that her victim doesn't come and knock on her door after an argument and instead leaves the room/home or hides in the bathroom.

Johnny Depp explaining that he shouldn't have to stay there when she's throwing pots, pans & vases at him. pic.twitter.com/T2QDZaER8e

Amber doesn’t sound like someone who is a terrified victim.

Amber Heard mocking her victim because he runs away everytime she gets argumentative and violent. #JusticeForJohnnyDepp pic.twitter.com/HWOH7hw5ci

Amber mocking Johnny for leaving when she attacks him is pretty rich, considering her claims of repeated abuse by him.

Amber Heard having a pity party tantrum because Depps security is trying to get her to go back to the US by plane. Notice how she doesn't once worry about Depp? It's all about her. The doctor knew she was guilty. #JusticeForJohnnyDepp pic.twitter.com/EgeZDkflWC

I believe you can learn a lot about a person based on the way they behave when they think they are in private.

Attaching in a short thread of both Amber Heard and her parents telling Depp that Ambers lawyers made her falsely accuse him of domestic violence in order to not be evicted from his penthouse after he asked her for a divorce.#JusticeForJohnnyDepp https://t.co/Nv2CY9V41Z

This goes right to the credibility not just of Amber Heard, but her lawyers as well.

Amber Heards father also text Depp with the same excuse for the false accusation against him. Trying to pin the blame on her lawyers. It was Ambers plan, no lawyer would suggest falsely accusing someone of abuse in order to get their houses. #FantasticBeasts #JusticeForJohnnyDepp pic.twitter.com/hybV9uu6Lj

If this is true, it is shocking and we can expect this to be brought up by Depp and his lawyers at trial.

SHE ROLLS HER EYES AND ALMOST LAUGHS WHEN JOHNNY ASKS IF SHE MEANT TO PUNCH HIM IN THE JAW, LOCK HER UP WTF

Amber’s behavior at the deposition was quite disturbing. She appeared to display the hallmarks of the dark triad: Machiavellianism, sociopathy and narcissism.

“the marriage counselor confirmed to me that [amber] heard had a borderline, toxic narcissistic personality disorder and is a sociopath. (..) she invariably accuses other people of the bad things she herself has done.” pic.twitter.com/lety6lGXrk

Apparently the couple’s marriage counselor found Amber Heard to be the “aggressor.”

Johnny Depp’s full report re: this issue can be found here https://t.co/Jhx0K4adoF

Today began the opening statements in the trial, by both parties and the testimony of Depp’s sister Christi. 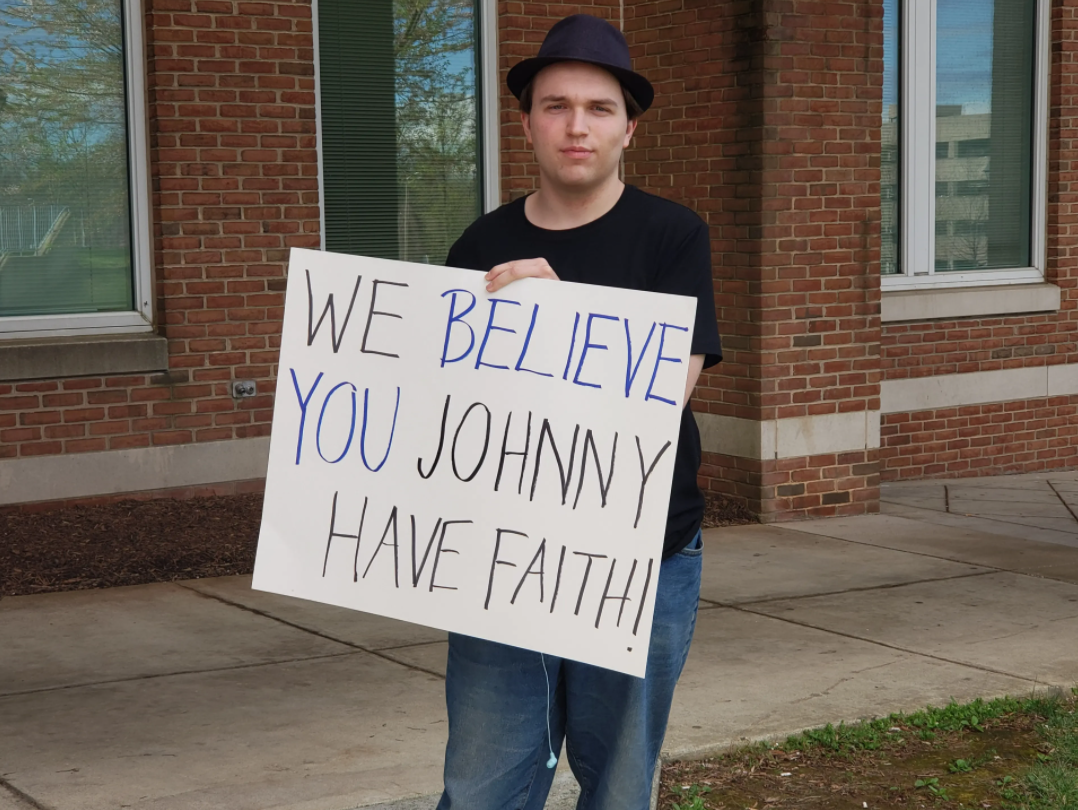 Fans gathered outside the Courthouse before the trial

I arrived at the Courthouse early in the morning and encountered some fans who mostly had gathered in support of Johnny Depp. 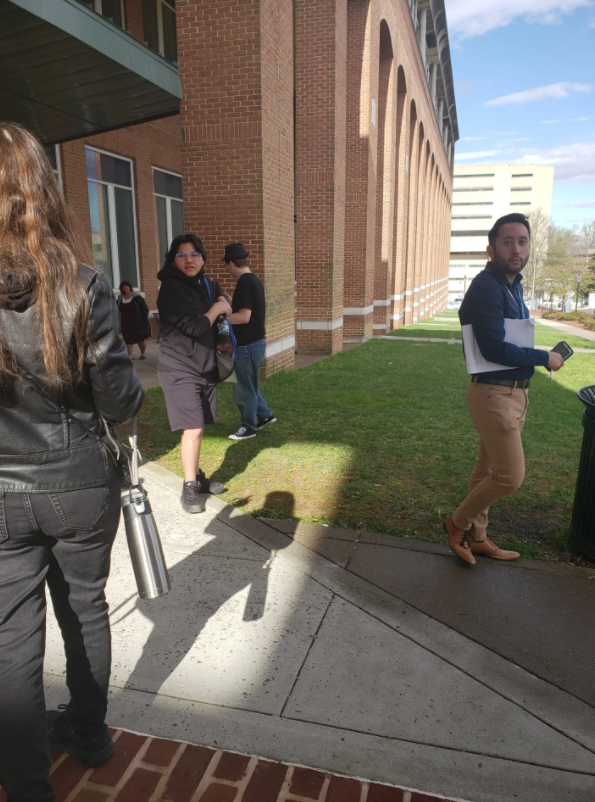 Fans, and another reporter gathered outside this morning

I spoke briefly to the fans and a local reporter. At 10:00 am the trial got underway, with the lawyers presenting their opening remarks. Ms. Heard’s lawyers alleged Depp once sexually assaulted her with a liquor bottle during this morning’s opening statements. Her lawyers recounted what they alleged were multiple instances of Depp abusing Heard. They claim he would get into a drug fueled rage and attack Ms. Heard.

Depp’s lawyers said that his name is now associated with a lie. They allege the evidence will show that Amber’s false allegations had a major impact on him, and his ability to work. They said a false allegation can devastate a career and family.

Amber’s lawyers said that Depp’s career was in “shambles” because of his own behavior and that it was his own fault, not hers. They claim Depp wanted to destroy Amber’s career and her life and that he was a drug addict, hellbent on getting revenge.

Johnny’s lawyers said that Amber was cold and calculating and the evidence would show that she made false allegations against Depp to advance her own career and profile. Depp’s sister Christi was the first witness to be called to the stand. She described their childhood and what Johnny’s relationship with his mother and children was like. She claimed the couples relationship was volatile.

Here are some clips from today:

The attorney for #JohnnyDepp told the jury that no one in 5 decades had accused the actor of being abusive of any kind to a woman until ex-wife #AmberHeard. @LawCrimeNetwork pic.twitter.com/agMivzWgpu

Ms. Heard was very stoic throughout the day.

OMG This opening is 🔥🔥🔥 THEIR MARRIAGE COUNSLER FOUND AMBER HEARD THE AGRESSOR & they're cutting to her reaction!! So glad I can watch it in private w/out commentary… So I can truly listen & prepare my thoughts!! Join us LIVE After the Trial @ 5PM EST #JusticeForJohnnyDepp pic.twitter.com/wuAF9bYuzd

This was a stunning revelation.

After telling Johnny Depp's sister Christi that she and Johnny Depp had had "a fight", Amber Heard told her to mind her business and that "Johnny loved that she was feisty".

Not really the words and behavior of someone suffering domestic violence. #JusticeForJohnnyDepp pic.twitter.com/Znw6kVPeds

Depp’s sister described the couple as having a fraught relationship.

"Behind the fame, behind the money, behind the pirate costumes, you’re going to see who that man really is." pic.twitter.com/uxEu1waCq3

Heard’s lawyers referred to Johnny Depp as a monster.

During opening statements on Tuesday, lawyer Elaine Bredehoft brought up an incident where #JohnnyDepp allegedly sexually assaulted his ex-wife #AmberHeard in the Bahamas. @LawCrimeNetwork pic.twitter.com/AfzDj3ETIr

Heard’s lawyers also claim he sexually abused her while they were in the Bahamas.

The trial resumes tomorrow morning, with Mr. Depp’s sister expected to continue her testimony. We will continue to provide updates on the trial.