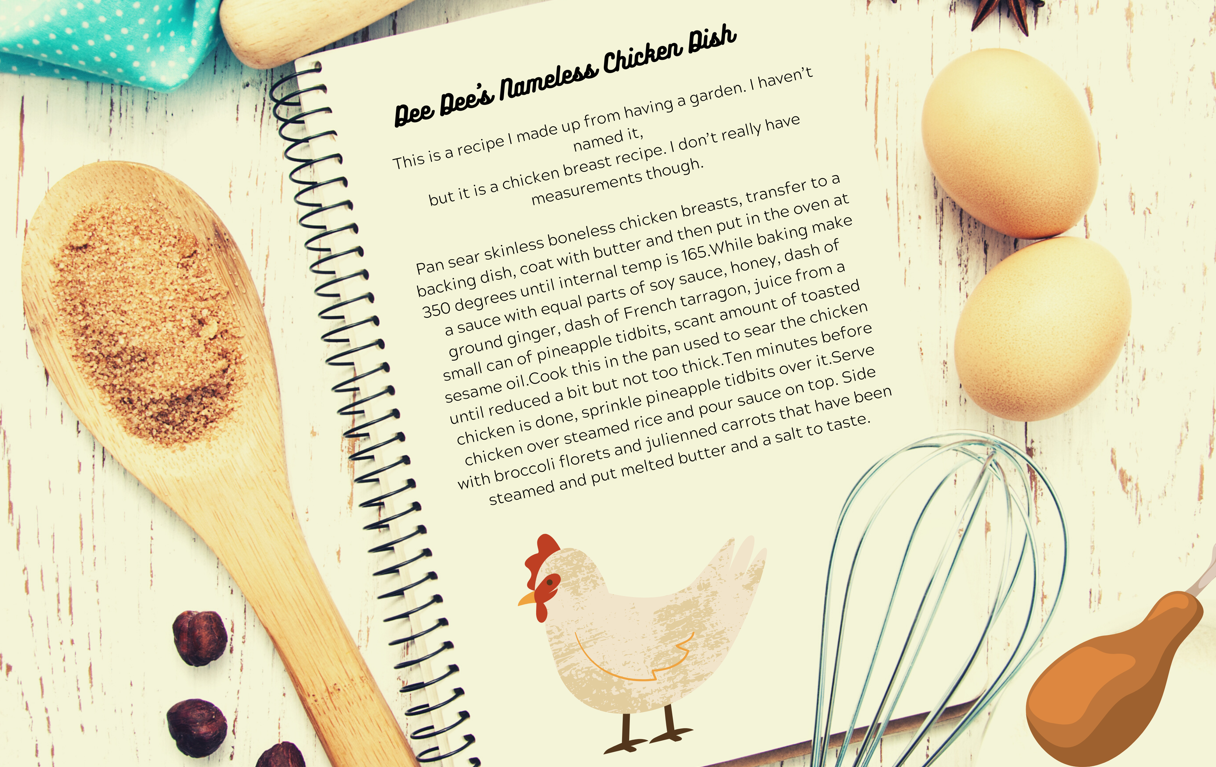 This is a recipe I made up from having a garden. I haven’t named it, but it is a chicken breast recipe. I don’t really have measurements though.

Pan sear skinless boneless chicken breasts, transfer to a backing dish, coat with butter and then put in the oven at 350 degrees until internal temp is 165.

While baking make a sauce with equal parts of soy sauce, honey, dash of ground ginger, dash of French tarragon, juice from a small can of pineapple tidbits, scant amount of toasted sesame oil.

Cook this in the pan used to sear the chicken until reduced a bit but not too thick.

Ten minutes before chicken is done, sprinkle pineapple tidbits over it.

Serve chicken over steamed rice and pour sauce on top. Side with broccoli florets and julienned carrots that have been steamed and put melted butter and a salt to taste.

If you find it is not really yummy, invite me over to cook it for you. 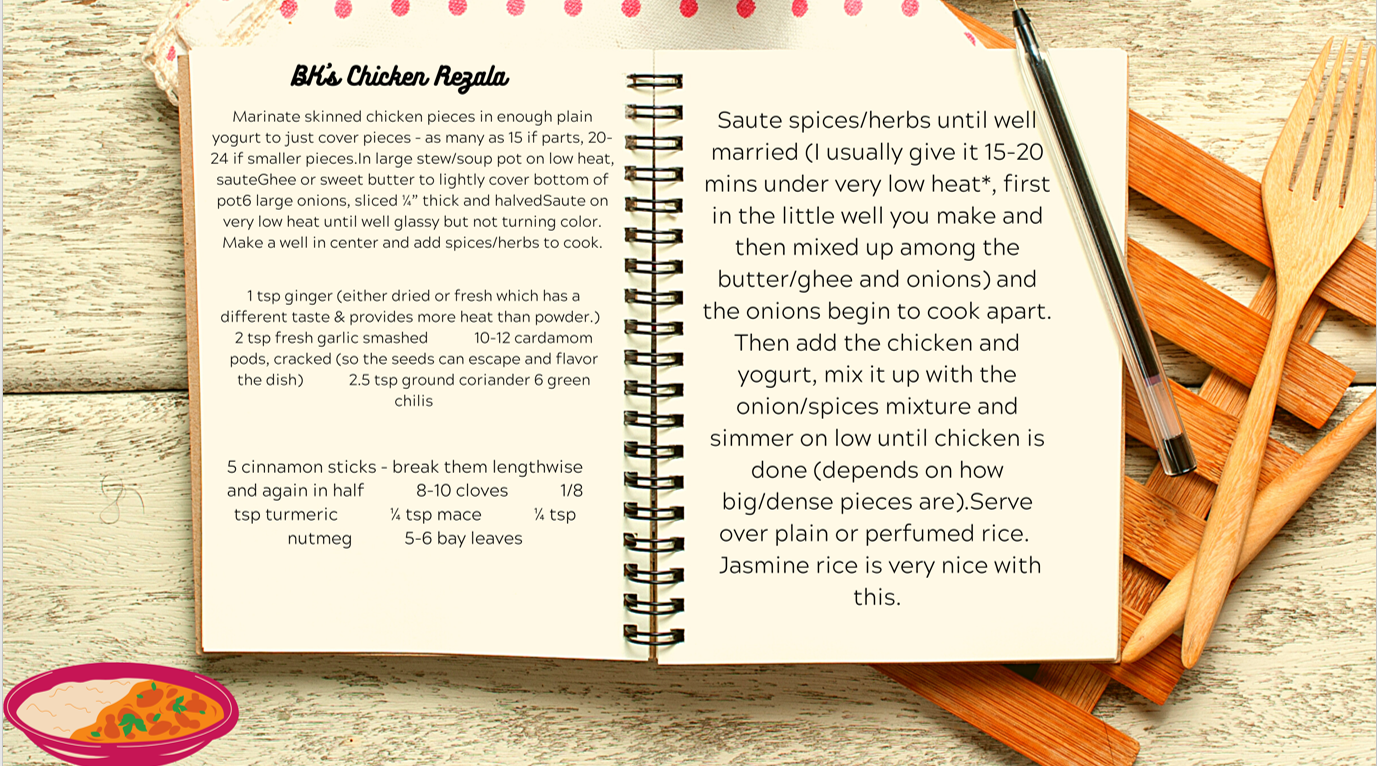 A crowd pleaser from the Indian Subcontinent

If you are timid about trying new things, especially spicy and hot recipes from the other side of the world, imagine me in my thirties in NYC and a boring cook at best, tackling this recipe and inviting my BF and friends of his to share the meal!!! Turns out, this recipe is sort of like a vegetable soup and if you goof up a bit on measuring or which or how many vegetables, it doesn’t really matter. It’s always good!

My source was the First Secretary in the Bangladesh Mission to the UN back in 1973 or so. His mother taught him to cook because she worried about him as a bachelor amongst us foreigners.  Apparently she told him that you can always accommodate more people by simply cutting the chicken up into smaller parts.

So sally forth and experiment, if you’ve never created an exotic dish from the Indian subcontinent, this one is far easier than you think. It’s never been a failure, no matter what I may have got wrong or was missing.

Marinate skinned chicken pieces in enough plain yogurt to just cover pieces – as many as 15 if parts, 20-24 if smaller pieces.

Ghee or sweet butter to lightly cover bottom of pot

Saute on very low heat until well glassy but not turning color. Make a well in center and add spices/herbs to cook.

1 tsp ginger (either dried or fresh which has a different taste & provides more heat than powder.)

10-12 cardamom pods, cracked (so the seeds can escape and flavor the dish)

6 green chilis – Serranos are perfect-very hot, so if you really cannot tolerate too hot, pare back to only 2.  Don’t know what fresh chilis you have where you are, so choose carefully.  Remove stem, slice ALMOST in half lengthwise.  That way people can pick them out as if you’re not used to them. They are lethal to eat raw, even cooked. BF used to eat small raw bites with his curries – like we eat pickles!

5 cinnamon sticks – break them lengthwise and again in half

Sauté spices/herbs until well married (I usually give it 15-20 mins under very low heat*, first in the little well you make and then mixed up among the butter/ghee and onions) and the onions begin to cook apart. Then add the chicken and yogurt, mix it up with the onion/spices mixture and simmer on low until chicken is done (depends on how big/dense pieces are).

Serve over plain or perfumed rice.  Jasmine rice is very nice with this.

I usually serve some cooling red cabbage coleslaw with golden raisins, sometimes sliced almonds.  If you’re serving a crowd who are NOT from the Indian subcontinent culture, I think it’s best to serve a relatively plain vegetable with a simple sauce or just butter as a contrast to offset what some people sometimes think is too hot.  But of course, that depends on how many green chilis you use.

* You MUST COOK THE SPICES, it was hammered home to me. A good Bengali cook would know if you didn’t and say ‘the spices are raw.’ Really!!! There were a few professional cooks in the crowd I knew! 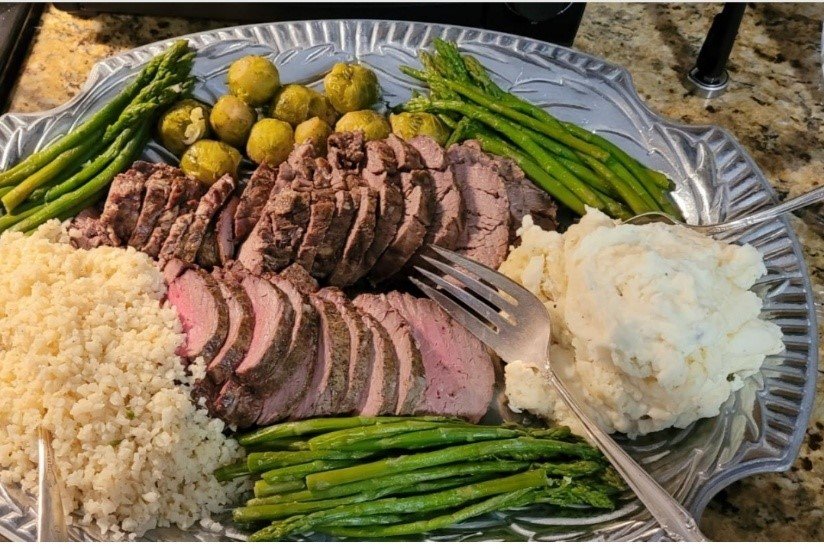 3-4 strands of Twine to secure roast

Let the tenderloin get to room temperature.

Make a paste of salt, pepper, 1 stick softened butter and 2 Tbs. olive oil. Cover the entire roast and press the mix into the beef. This will render a good crust and excellent au jus or gravy base.

Secure the roast with twine along the length of the tenderloin, making sure no pieces are separated.

Place meat on a roasting pan, in oven pre-heated to 250°F. Use middle rack. Cook the roast for 30 min.

Oh, please don’t shoot for well-done on this costly cut.🙏🏼 The tapered- end pieces will suit those who like it that way.

You may pan sear to ensure a good crust, reduce roasting time at the 450°F temp. Pour drippings into gravy boat for au jus, or whip up some gravy in a sauce-pan, by adding one package of McCormick Beef Gravy mix. Follow package directions.

Next up will be Desserts. We have some lovely submissions waiting for you. Y’all come back here next Saturday! ~~Editors