Everything was prepared; information memorized, speech practiced, equipment deployed, photocopies printed, furniture arranged, and even a classroom television on wheels strategically positioned to display the Grade 4 syllabus in action. I had brought my pack-lunch and performed my breathing exercises. Every eventuality had been covered.

It was “Meet The Parents Day” in the first week of the first term of my first year teaching in a Primary School. Appointments started at 09:00 and I sat at my super-organized desk looking out the side-door from my immaculately ordered classroom. The first pair of parents timidly crossed the playground to be impressed by their child’s new teacher and I was ready. Tie straightened, breathing calmed, “Greeting Sheet” in hand, welcoming smile on face … I was ready. What could possibly go wrong?

The look on their faces was wrong for a start, as if they’d just lost their door keys … and wallet … and their favorite pet.

“Have you heard what’s happened?”, was not exactly the response I’d expected.

The best laid plans of mice and men could not have prepared me for what came next as these agitated and rather distraught people recounted what they had just heard on the car radio. The Twin Towers in New York, had been hit by an … aeroplane.

Reaching through the cognitive dissonance, I suspended my anxious “Getting To Know You” chat and, as I.T. Co-ordinator, instinctively punched the TV On-switch on the remote. Up came BBC News 24 on the screen and our worst fears were confirmed – the surreal sight of NYC engulfed in thick black smoke together with panicked and disjointed commentary from God-knows who.

Simultaneously, a second set of parents joined us and the Head of Juniors entered the room, speechless. We stared at the screen in disbelief. What could you say?

“Is it an accident?”

“Are there people in there?”

“Do you know anybody in New York?”

I didn’t give out a single “Welcome To Grade 4” info pack that morning and my best laid plans went asunder as the classroom filled with shocked parents: some stayed, perched on tiny chairs bringing latecomers up to speed and others rushed home to the comfort(?) of their plasma screens. We were all silent at the moment a mum called out …

And we witnessed the second plane plow into the South Tower. Fifteen minutes after the first impact we all knew this was no accident (as some had hoped), unequivocally, unprecedentedly, this was no accident this was something unimaginably new. And our speculation was cut short again when the rather disheveled Head Mistress herself appeared to inform us a third plane had hit the Pentagon … The Pentagon!

How many more? Were they going to hit London next? Who the hell is doing this? Is anywhere safe now?

People were completely caught up in the events that were unfolding in front of their eyes as if they were there personally. They had questions where there were no answers and a genuine feeling of indescribable anxiety permeated the room – as though something immense had begun, yet we knew not what or by whom.

At one moment that morning, I remember stepping back thinking, “Well, this is an ill omen, I have a classroom full of weeping and traumatized parents … this does not bode well for my career.” The next minute Building-7 collapsed along with any doubt we had entered a brand new and very different century.

As it turned out, for me it was the beginning of a wonderful year, one of the best, spent with an incredible bunch of 4th Graders and supportive parents. Perhaps the bond we formed on that day, 11th September 2001, brought us closer and got us through … together.

~~ Ed. Note: Breaking with royal protocol, Elizabeth II ordered the playing of The Star Spangled Banner at Buckingham Palace, for which we Patriots were most grateful. Observing a 2-Minute Silence in London is among the most poignant moments ever. A few days later at a memorial service for 9/11 victims in St. Paul’s, the assembled attendees again sang our anthem. Small but mighty emotional support moments to many of us Americans. 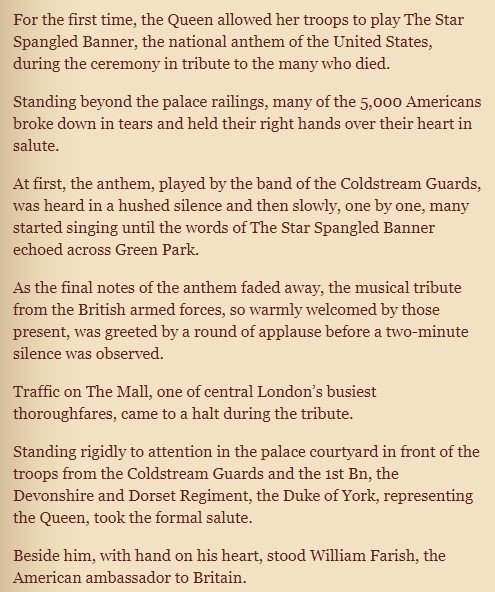