Buck is known for his 1987 recall attempt of then-Arizona Gov Evan Mecham. In 2007 he ran unsuccessfully for West Hollywood City Council and has donated more than $520,000 to local, state and federal Democrat campaigns. Buck was also a member of the California Electoral College. 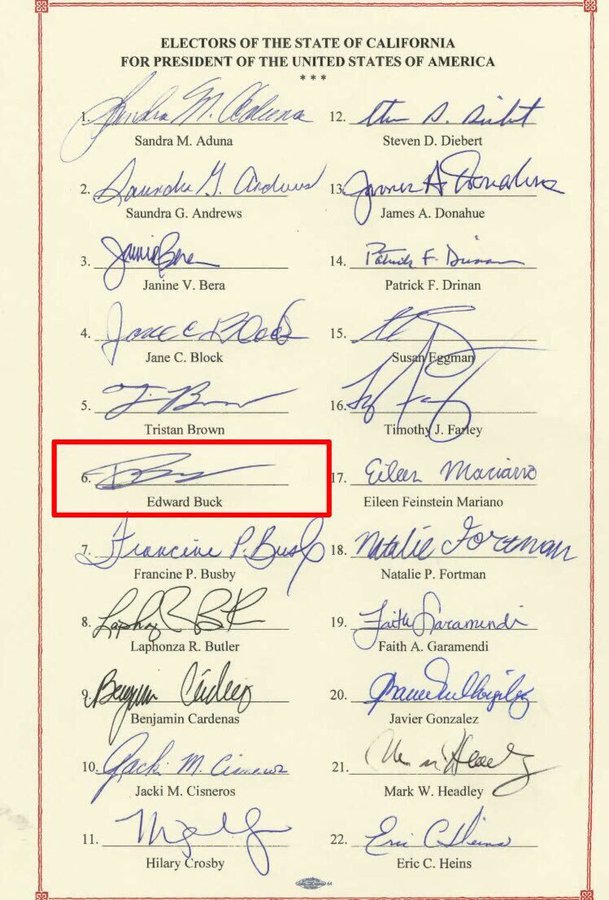 July 27, 2017 Gemmel Moore was found unconscious, wearing only white socks, in Buck’s living room and pronounced dead on police arrival. The Moore autopsy report states the cause of death was a methamphetamine (Meth) overdose. Buck, during the Los Angeles Sheriff Department (LASD) interrogation, stated that he did not see Moore using drugs. However, during the search of Buck’s residence, LASD documented finding 24 syringes, 5 glass pipes and 1.76 grams of Meth along with sex toys in a tool box in the living room.

An August 21, 2017 interview notes that Moore’s mother stated that when Moore lived in Los Angeles in 2016, he “called her and said that a rich and powerful man named Ed Buck held Moore against his will and shot him up with drugs.”

And in an interview with Moore’s aunt on August 21, 2017, “She stated that in April 2017, Moore told her that Buck used to inject Moore with drugs and would do ‘horrible things’ to him.

Another death occurred on January 7, 2019 where Victim 1 was found unresponsive on Buck’s living room floor wearing only white socks. He was pronounced dead at the scene. An autopsy determined death was from an overdose of Meth and ethanol toxicity. The coroner report also stated that he had a rubber ring around his scrotum and another at the base of his penis.

Buck told LASD that he had been friends with Victim 1 for almost 30 years and he had texted Buck wanting sex. Buck also told LASD that he left the living room for about five to ten minutes and when he went back in the room, “Victim 1 had multiple layers of clothing on his face and was walking on his knees making ‘ape’ noises. Victim 1 then fell backwards and stopped making noises.”

The same date of this investigation into Victim 1’s death, a neighbor of Buck’s called the  police reporting a package outside of Buck’s window. LASD seized the package and found multiple syringes and glass pipes along with baggies with “powdery residue in them.” After tests were done, DNA belonging to Buck and Victim 1 were found on the glass pipe and DNA belonging to Victim 1 on the syringe.

The indictment details a telephone interview of Victim 2 on August 15, 2017 where he describes his encounter with Buck on July 3, 2017. He had fallen asleep on Buck’s couch and when he woke up, his arm, red and sore, was tied to the couch. He believed he had been injected with drugs by Buck while he was asleep.

Victim 3, interviewed on September 6, 2017, explains that he met Buck on an escort website Adam4Adam, where Buck messaged him asking if he wanted to make money to engage in “party and play.” He knew this meant “money in exchange for drug use (party) and sex (play).” Buck offered him $800 to $1000 to “party and play” with cocaine. When he went to Buck’s house, he was given a bag of cocaine while Buck watched him snort it. Buck, per the indictment, offered to give him more money if he used more drugs. Victim 3 reported to LASD that Buck took photos of him during this first meeting.

Victim 4, who was interviewed on September 14, 2017, stated he had met Buck “in an area in Hollywood known for drug use and transgender prostitutes.”  Per the complaint, he stated that Buck offered him $300 to come over and smoke Meth for three hours. Once they had both smoked the Meth, Buck asked him to shoot up the meth. Victim 4 refused which made Buck more insistent that he smoke more Meth.

Buck again used Adam4Adam to reach out to Victim 4 and they met at Buck’s home. There he was offered $100 to $200 per hour to engage in sex and drugs. He was at Buck’s home multiple times. He stated that on one occasion he fell asleep on the couch and didn’t feel well when he woke up. He told LASD detectives he believed he had been shot up with drugs. The next day, he was taken to the hospital where the staff confirmed he had “ingested a tar-like substance, but they could not confirm what the substance was.”

Victim 5, interviewed as part of the investigation into Victim 1’s death, spoke with LASD on May 8, 2019. He stated he met Buck on Adam4Adam and went to his house on April 24, 2019. He engaged in sex with Buck for money and marijuana, the complaint states. He also told the LASD investigators that Buck had plastic bins which contained white, gray and black men’s underwear. These were all neatly folded in the bins and separated by size. During this occasion there was another man in the apartment who “asked Buck if he could smoke methamphetamine one more time before he left. Buck said yes, and provided the man with a glass pipe and methamphetamine.”

Victim 5 also stated Buck offered him Meth multiple times but he declined. Buck drove Victim 5 to a pot dispensary where he purchased it for him and then to a liquor store where Buck purchased vodka for him and went back to the apartment. While there, Buck showed Victim 5 “videos of Moore who appeared to Victim 5 to be scared. Buck’s offers of methamphetamine became increasingly insistent, and at some point, Buck told Victim 5 that it was not gratifying for him if Victim 5 did not ingest methamphetamine.” Victim 5 took two pills that Buck told him were Viagra. He told LASD investigators that after taking them, his legs locked up and he felt weird.

Interviewed on March 13, 2019 Victim 6 told LASD that he was a homeless man who lived in Plummer Park, “where he learned about Buck from others who congregated there. Victim 6 said that Buck was nicknamed ‘Doctor Kevorkian,’ and was well known for compensating male prostitutes with drugs and money.”

Victim 6 also stated it was part of Buck’s “role-playing and fantasy to inject people with methamphetamine.” He had never injected Meth and was uncomfortable doing it. After assurances from Buck that it would be fine, he agreed to a small amount and Buck pushed to inject him. Buck ended up injecting a full syringe into him. He lost consciousness and when he regained it, he was told to shower and was paid.

During his second encounter, he was again injected with Meth and this time instantly lost consciousness. He states, per the complaint, “when he awoke, he felt pain in his anus and saw that it was bleeding. A third unidentified man was recording Victim 6.”

Victim 7 was interviewed on April 2, 2019. Buck found his phone number on Adam4Adam and called him and they agreed to $300. Buck sent a car to pick him up. Once at Buck’s apartment, he gave Victim 7 “a Klonopin pill and a glass containing clear soda. Buck insisted on injecting Victim 7 with methamphetamine, but his hand was shaking too much, so Victim 7 injected himself. Victim 7 stated that methamphetamine normally makes him more alert, but after Victim 7 drank the clear soda Buck gave him, he became sleepy and began loosing control over his physical movements.” He passed out and awoke to Buck coming towards him with two more Meth loaded syringes. He left only to return another time. This next time, he injected with what he was told was Meth. “After administering only part of the drugs, Victim 7 was lying on the floor, unable to move for approximately 6 to 7 hours. Victim 7 believes that Buck gave him some sort of tranquilizer. Victim 7 reported that he began to feel as if he was not able to move. While unable to move, at some point, Victim 7 claimed that Buck wanted Victim 7 to leave, but that Victim 7 could not move. Buck then became frustrated and obtained a power saw from a closet, turned it on, and approached Victim 7 with it. Victim 7 said that he got an Adrenalin rush and was able to stand up and go to the kitchen.” He also stated once he was able to speak again, Buck refused to pay him and then another man known to him as “Chad” arrived, maybe to remove him from Buck’s apartment.

Victim 8, interviewed on March 21, 2019, stated Buck paid him with cash and marijuana for sex. On the last occasion, “Buck provided him with what he thought was vodka, but after consuming it, he fell asleep. Victim 8 stated that when he woke up, Buck was injecting Victim 8 with a drug via a syringe. Victim 8 panicked because he does not use methamphetamine, and he tried to get up, but he could not move. Victim 8 stated that his underwear was pulled down and he felt excruciating pain in his anus, which was bleeding. There were metal clips fastened to his nipples, and when he tried unsuccessfully to remove them, Buck laughed and whispered to him. Victim 8 reported that he was in a state of catatonia.”

Victim 9, interviewed on April 26, 2019, stated he had sex with Buck multiple times for drugs and money. He would sometimes pass out only to wake up to Buck either injecting him or preparing syringes to inject him.

Victim 10 was identified on September 11, 2019 by LASD for his numerous encounters with Buck.  He had been living in a hotel on Skid Row where Buck sent an Uber to pick him up. At Buck’s apartment, they engaged in sex and Buck gave him Meth to smoke and shoot up. Then from July 29, 2019 to September 6, 2019, he lived with Buck where Buck would supply Meth and inject him almost daily.

September 11, 2019, Victim 10 was again injected with Meth twice and also given GHB (Gamma Hydroxybutyrate). Victim 10 stated he drank the GHB in soda water. He states that he began to feel like he was overdosing again and asked Buck for a Klonopin pill. Buck refused this request. Victim 10 then asked Buck to get him an ambulance which he refused to do so. Victim 10 had to walk to the gas station across the street and ask both a passerby and the gas station to call 911.

Ed Buck's arraignment . . .
Yup
Squirrelly !
Blue vest is reserved for inmates who are violent, suicidal or at risk of being attacked by other prisoners.
**Reporters told Buck is not suicidal!pic.twitter.com/HqU2ZESfr2

This story is ongoing and will be updated as it works it way through the court system.