July 18, 2021 – Look Ahead America (LAA), a non-partisan and non-profit organization founded by Matt Breynard, organized an incredible rally in Washington, DC outside of the DC Corrections Facility to call attention to the January 6 detainees. Many of the January 6 detainees have no history of violence and no prior criminal record. The fact that the DOJ and FBI are treating these people like “domestic terrorists” is disgusting and it is corrupt. In no way can they be described as such. Many of these people simply trespassed inside the building, much like the Left did in 2018 when they stormed the Capitol to “protest” Brett Kavanaugh’s confirmation hearing. 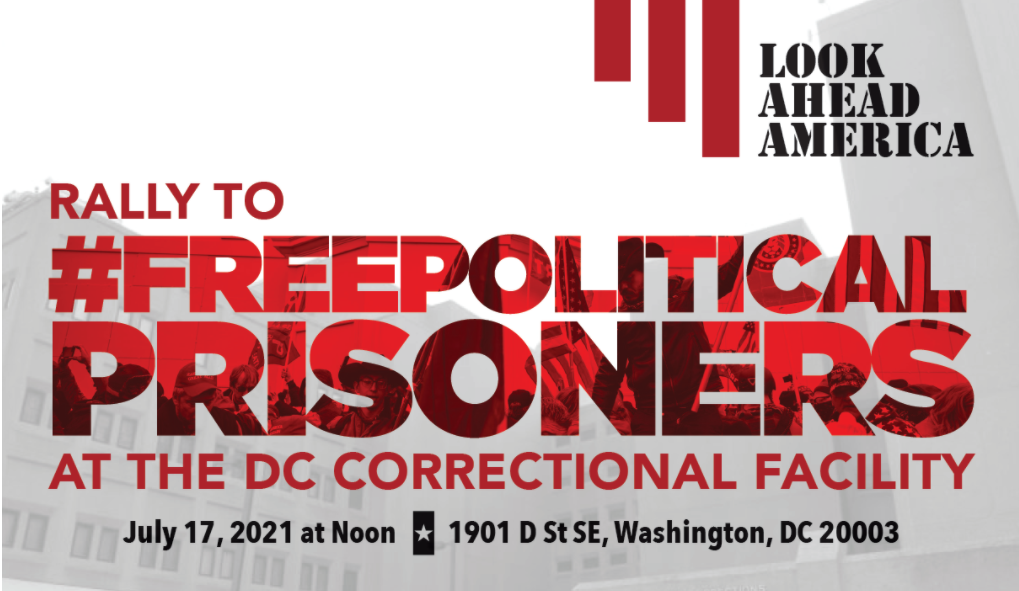 The DOJ is attempting to withhold over 14,000 hours of CCTV footage from January 6, both inside and outside of the Capitol building that could provide exculpatory evidence and give the public a better idea of what really happened that day. Matt Breynard and Look Ahead America decided someone needed to speak out about what is happening to these people, and call attention to the beatings and absence of civil rights. LAA announced they were organizing rallies across America in support of freeing the political prisoners. From their website they announced:

Patriots’ Soapbox attended the main rally in Washington, DC on behalf of American citizens and in support of equal treatment under the law and civil rights.

We arrived at the DC Corrections Facility early. There were others already gathered outside, some waving flags, so I was able to interview a few Patriots prior to the start.

A man from Massachusetts told me he had traveled all the way to DC to attend the rally. He was concerned about the disparate treatment of Trump supporters who protested and the BLM and Antifa rioters who looted and burned down buildings. He said during the summer BLM riots “three police officers were killed, billions of dollars worth of damage to buildings were reported through insurance claims, around 40 innocent people lost their lives, people like Jessica Doty Whitaker and J. Aaron Danielson. There was just chaos, these people tried to lock federal agents inside a federal building and burn it to the ground, and they haven’t been thrown in jail, they get released the next day.”

Another couple I spoke to came all the way from Florida to Washington to attend the rally. They were concerned with how the DC jail guards were treating the prisoners, with the woman saying “we have seen this before with the 3 guys Trump pardoned, the guys accused of so-called war crimes. They were being beaten and abused also. The way they are treating these guys is awful. One man was beaten so badly he is blind in one eye. It has to stop.”

As the buses arrived, Mr. Breynard came up to the group that had gathered and directed them to follow him to the side where the DC Correctional Treatment Facility is located, the main building where most of the prisoners are being held. A large crowd exited the buses, carrying large handmade signs with slogans — #FreePoliticalPrisoners and #ProtestorsAren’tTerrorists.

As the group made their way to the Northeast side of the building by the Congressional Cemetery, they were met by police vehicles and prison guards wearing masks standing outside of the prison, looking like they were soldiers defending a fortress. The DC jail made clear that the presence of the protestors was unwanted, looking angry and scowl-faced. It appeared as though the police wanted to block the rally from being heard by prisoners, and they did not want attention being called to the rally and its message.

Not one Republican elected official made the short three-mile trip from Capitol Hill to show up in support of their own constituents who are being outrageously mistreated. One female speaker at the rally said she called her state representatives to find out if they had even made a statement in support of the political prisoners or mentioned how they were being tortured and found that not one of them had done so. It was shocking that not even one Republican Congressmen could be bothered to lend their support to the cause. 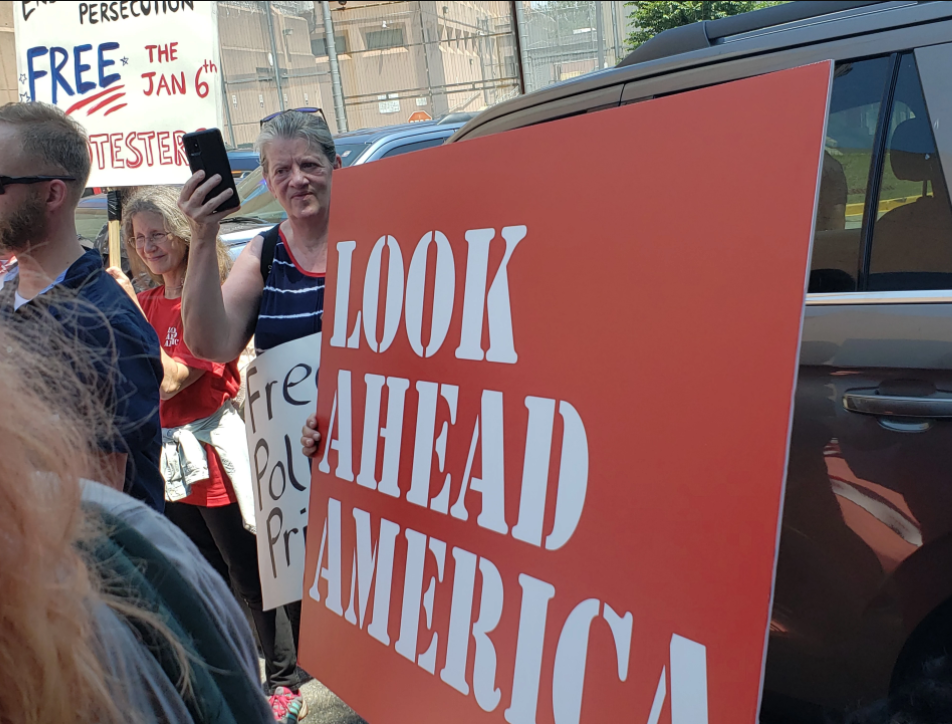 A Benedictine Monk led a prayer at the beginning of the event, and then several folks gave speeches. One of the speakers, Cara Castronuova founder of CAPP (Citizens Against Political Persecutions) gave an impassioned speech and led a chant of “LET THEM GO.” 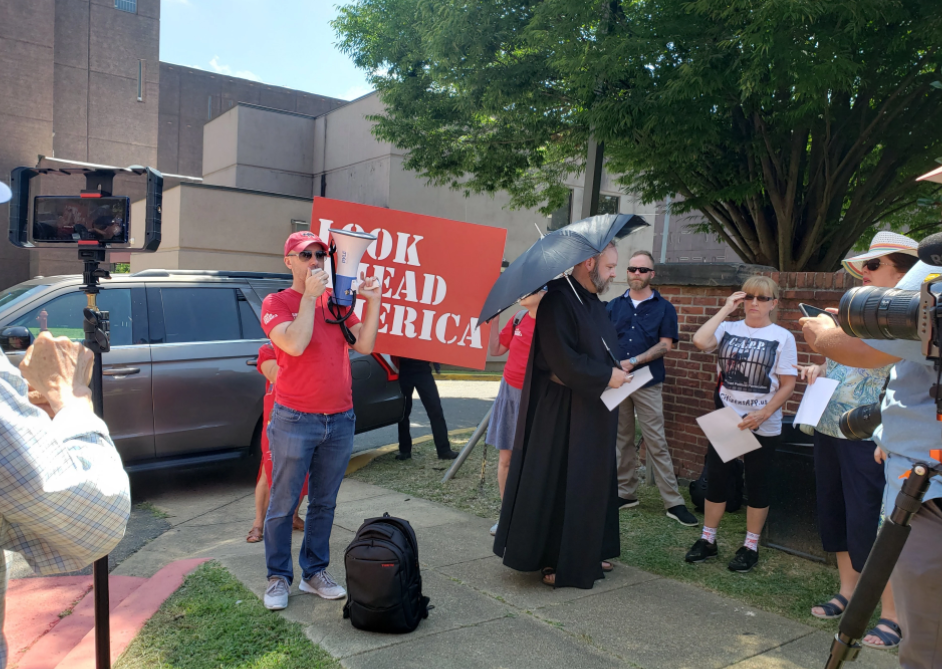 Several family members of January 6 political prisoners spoke, and at times became emotional. You could feel the pain and anguish inside them and the deep sadness, but they were trying to be brave and professional. Heartbreaking letters written by some of the folks inside the prison were read. 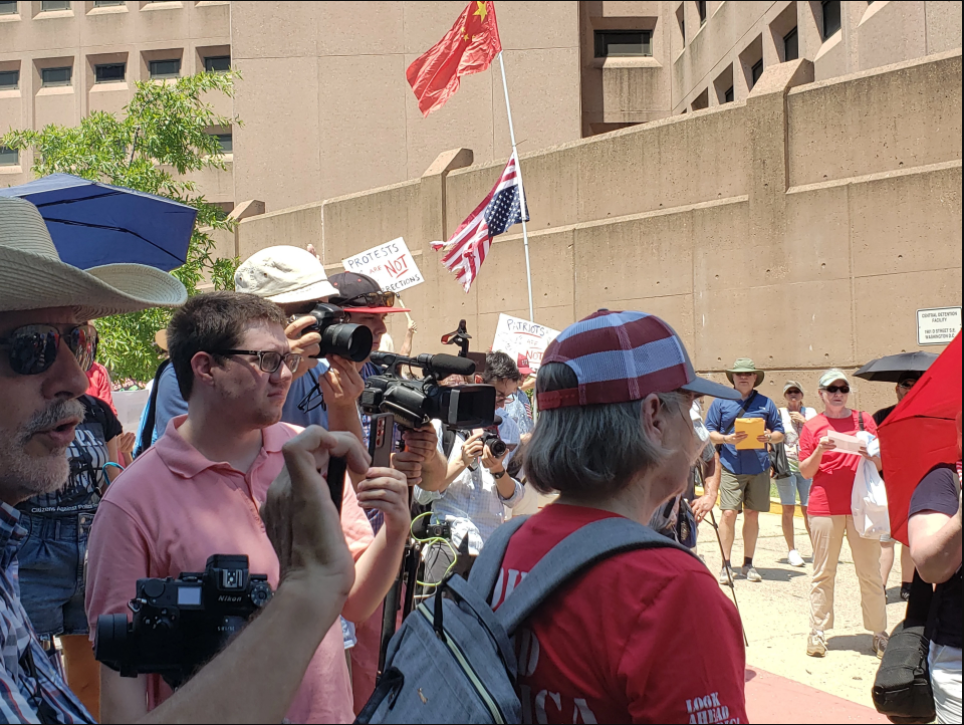 There was a Washington Post reporter, who was in the back under the shade, writing things in her notebook and she had a WaPo “intern” with her who was running around with a large camera snapping pictures of everyone who was at the event. 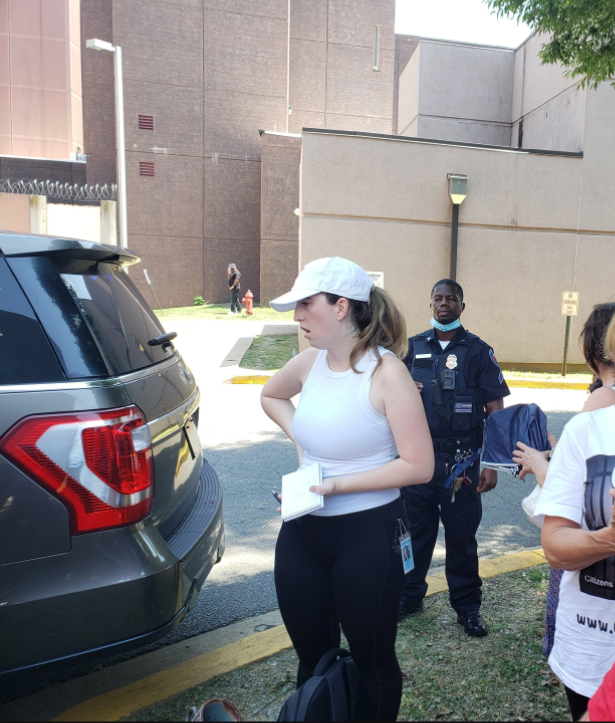 She dressed better than I did for the event, which got so hot people were covered in sweat. 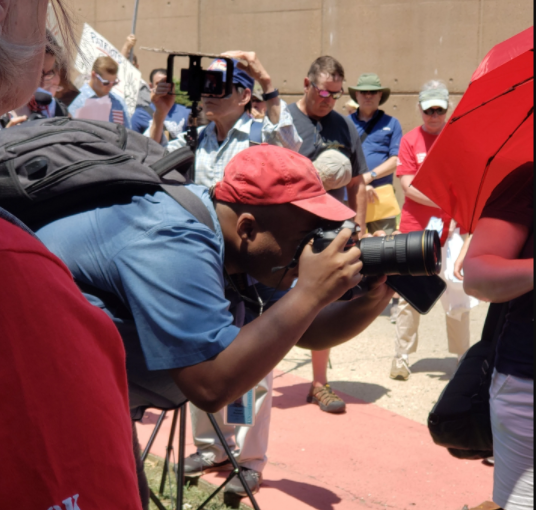 This is the gentleman who was taking pictures of everyone. I will be interested to see how they reported on the day’s events.

One of the speakers was Mr. Gene, a father of a political prisoner and he read a letter from another political prisoner who is rotting in jail as he is dying of cancer and being denied medical treatment. His letter was truly amazing. I encourage you all to listen to the video above.

There was a mother there, on the phone with her son who is currently being held in the DC jail and she said they closed the doors so the prisoners couldn’t see or hear the rally. They didn’t want their hopes and spirits to be raised by the people outside.

Ned Lang also spoke. I believe he is prisoner Jake Lang’s father. He said “Jake has been in this American GITMO since January 13th and was locked in the hole (SHU, solitary confinement) for 2 and a half months.” He continued “they took everything from him, his clothes, his legal papers, everything. He has nothing but the Bible.”

I gave a short speech called “American Gulag” that covered the disparate legal treatment these political prisoners are experiencing.

Here is a full length, high quality video from the rally, posted by Matt Breynard:

Matt did very good job with this rally, he was extremely professional and well spoken, showing compassion for the family members. He made a really noteworthy observation. He said “there was a man once who became President and he was a community organizer. We laughed at him, and that was a grave mistake.”

He pointed out that if a Republican president arrested a bunch of Left wing protestors, AOC and Bernie Sanders would show up outside that jail with 100,000 people and those prisoners would be released within 48 hours.

Breynard told the assembled crowd that we must become more organized and we need to be community organizers ourselves. He correctly pointed out that the leftwing media would be yelling from the rooftops about “authoritarian fascist dictators” if Trump had rounded up Left wing protesters and threw them in prison. When a leftwing dictator does this to conservatives, the media justifies it and cheers it on.

This is the new Soviet America and if we don’t become more organized with better participation, we will never succeed politically.