All of the heartbreaking children’s stories demonstrate amply that Oregon needs more caseworkers who are adequately supported and trained to meet the needs of the children in their care. Studies have shown, as the complaint states, caseworkers with high caseloads have less time to interact with the children, families and service providers. Oregon has failed for well over a decade to ensure that caseworkers carry caseloads consistent with reasonable professional standards. The Child Welfare League of America established nationally recognized standards for caseworker loads, which stands at 12 to 15 children. Caseworkers are unable to assess the children’s safety and well-being while juggling more than the caseload standard.

Too many cases to manage leads to a high turnover within caseworker ranks and that snowballs throughout CPS. This translates to an 18-month average of time on the job, creating a need to fill vacancies with less qualified applicants. Research has also shown that this turnover correlates to children having multiple placements and receiving fewer recommended services. Additionally, children are staying in foster care longer than actually being adopted into a permanent home.

A survey conducted by the Service Employee International Union Local 503 in August 2016 showed that 57% of those responding had caseloads that were over the recommended limits. Some respondents reported as many as 28 cases. And 30% of new employees reported receiving little or no training and inefficient or lack of oversight. CPS investigators reported having 21 investigations per month (well over the 6.85 per month national standard.) Some investigators have reported finding caseloads of 45 cases at one time, almost four times the recommended limit. Caseworkers who certify homes have reported 60 to 80 cases at one time!

DHS is alleged to have a lack of planning to place children in permanent homes. Caseworkers, with their inappropriately heavy caseloads cannot develop plans to secure permanent homes and ensure that the recommended and necessary services are provided. Many of the children lack even a case plan fully compliant with the requirement to place children in permanent homes. The 2016 audit found that hearings do not occur in a timely manner and that only 41% of the children have a plan to set up a permanency goal. Children who have been in foster care more than 12 months may eventually spend years there without a permanent home. The audit found that 46% of the children waited for more than 36 months to be adopted, leaving them in a legal limbo. The 2018 audit showed that 41% of children were classified as “legal orphans.”

As detailed in the individuals’ stories named in the lawsuit, many of the children are placed in homeless shelters and unstable living homes. This results in being homeless. Oregon foster children aged 16 and older are most likely to age out without ever being placed back with their natural families. The national average of children in the system who age out is 51%, while in Oregon it is 71%.  WalletHub showed in 2018 Oregon was ranked first for the rate of homeless children and youth in the country.

Oregon conducted its own review in 2016 of 200 case files. Fewer than two of three children had a completed and updated case plan; 25% had no case plan at all. Children were matched with any available bed even if it was later determined not appropriate.

Oregon has not ensured that they have a sufficient number of available foster homes and community resources resulting in using poorly supervised out-of-state placements to fill this gap. Those placed in out-of-state homes report worsening not only of their physical, mental, intellectual, and cognitive disabilities, but they lose continuity in their schooling.  In March 2018, it was reported that 50 children were placed outside of the state. As of March 2019, 86 kids were out of state in Arizona, Arkansas, Idaho, Illinois, Indiana, Iowa, Montana, Oklahoma, Pennsylvania, Tennessee, Utah, Washington and Wyoming. The rates charged by these homes range from $275 to $803 a day. The most commonly utilized homes were Sequel Youth and Family Services, and Acadia Healthcare.

PSI, Psychiatric Solutions was previously used for placement of children.  Former CEO Joey Jacobs caused PSI to pay out $65 million in a settlement. Jacobs and five other members of the management team joined Acadia and made it one of the country’s largest for-profit behavioral health politics. In October 2018, a research analyst that covered Acadia published a stock downgrade report based on the news that Acadia had been concealing widespread patient abuse and neglect owing to under-staffing. Their business model was based, per the complaint, on purchasing new locations and then degrading the patient care. 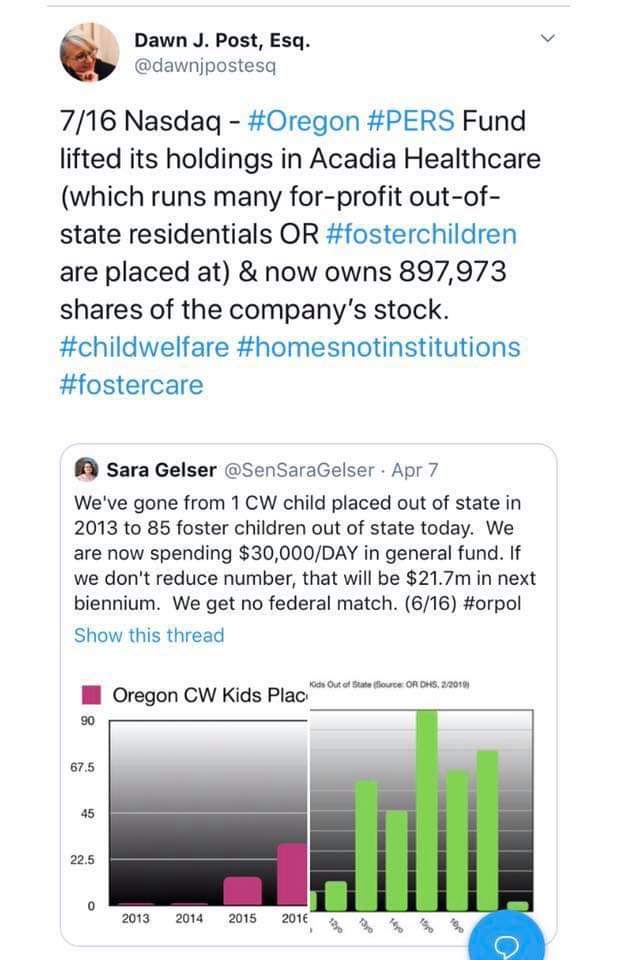 At Acadia, not only are there undisclosed criminal indictments and convictions of former employees for the death or assault of patients, also found were allegations that Acadia has:

Oregon has a financial stake in Acadia as their PERS retirement account is invested in Acadia. Sequel Youth and Family Services, previously known as Youth Services International (YSI) has had their own series of issues. Federal and local officials, per the complaint, have determined that the children placed at YSI have had exposure to physical and sexual abuse. One of the co-founders of YSI is now a founding stockholder, president, CFO and COO at Sequel. At the time of the lawsuit, 77 children were located at Sequel.

Clarinda Academy in Iowa, a Sequel facility, has five Oregon children housed there at the time of the lawsuit. After a report published by Disability Rights Washington, the state of Washington announced that they would stop placing children at Clarinda Academy and move any who are placed there. Operated like a jail, Clarinda has had documented abuses.

Desert Hills facility in New Mexico has had one Oregon child placed there. The state of New Mexico issued a “cease and desist ordering the facility Desert Hills to shut down due to serious and multiple allegations against facility employees for assault, battery and sexual contact.”

At least 30 children from Oregon are placed at Northern Illinois Academy, Norris Academy in Tennessee and Red Rock Canyon Academy in Utah. Criminal investigations and charges were brought in 2018 against these facilities that cost from $330 daily to $803 daily.

Oregon has one child at the Tennessee Kingston Academy at a cost of $450 daily. On February 22, 2019 the Tennessee Department of Child Services removed 18 of their foster children while they are under investigation.

All of these facilities have similar aspects in common. Each is located far away from the population. They are either a locked or secure home. The children have no contact other than the other residents (detained children) or staff. The children are so far removed from their families and friends that it is impossible for them to keep these connections.

Oregon’s instability in placement is harming the children. A child’s permanency is the most important factor affecting a foster child’s well-being. This poses the greatest risk in young children, impacting development of the brain during this period. The instability has shown to increase the risk for poor academic achievement, ADHD and a variety of behavioral health issues. For children that are adolescents, this instability leads to substance abuse, juvenile arrests, failing out of school, a disruption to their social network and mental health issues.

These issues are further compounded by the fact that every time a child goes to a different foster parent in a different county, their health care is affected. A new county means a new agency becomes affiliated and new providers take over managing the child’s Medicaid insurance. This was shown in the 2018 report co-authored by Governor Kate Brown and stated, “Currently, there are not adequate resources so that children who require partial hospitalization, short-term psychiatric residential treatment services, and sub acute programs are able to access those settings at the right time, and at their level of need.”

This article is based on the complaint filed. Updates will follow regarding the responses by the defendants and all other filings. The issue of CPS is vitally important to our children and to us at Patriots’ Soapbox, and will continue to be addressed in our ongoing series about the nation’s Child Protective Services organizations.