Officer Gifford, a 38-year-old man and commissioned police officer in excellent standing was in good health prior to January 8, 2019.

Gifford was assigned to help with the cleanup of a homeless camp on January 8, 2019 near 1st Avenue South and Denver Street South. It was unknown by Gifford that the homeless camp was contaminated by PCBs (Polychlorinated biphenyls). PCBs are extremely dangerous man-made toxins. The City had not, per the complaint, performed any site testing or evaluation prior to ordering the cleanup.

On June 5, 2019 Seattle Public Utilities (SPU) Source Control Inspector Michael Jeffers was driving in an industrial area of South Seattle in the Lower Duwamish Waterway (LDW). PCBs are one of the primary contaminates of concern in the LDW with specific contaminates identified.  (This site is listed by the Environmental Protection Agency (EPA) as a Superfund Site).  Jeffers noticed a strong smell of PCBs causing him to pull the car over to investigate. Jeffers ended up gathering samples of the roadway shoulder and from the adjacent storm water inlet which were sent to the lab on the same day.

Jeffers returned to the same area on June 17, 2019 for further investigation. The smell of PCBs was “unmistakable and overpowering.”  Jeffers suspected that there was a serious environmental concern.  Per the complaint, the samples testing reported a PCB level of 40,300 ppm (parts per million). A level of even just 1 ppm is cause for concern.

After receiving these test results, SPU notified the Washington State Department of Ecology and the EPA Regional PCB office.

On June 20, 2019, Jeffers returned with Seattle Department of Transportation (SDOT) Senior Environmental Analyst Craig Dahl to discuss the scope of the containment.

The City notified select employees that they had been exposed on July 2, 2019. Gifford was one of the employees notified. 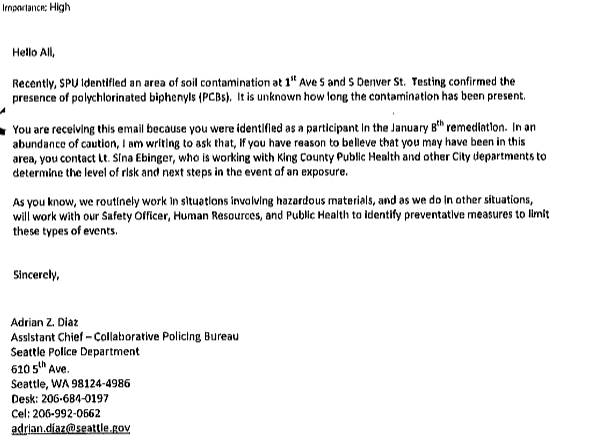 Officer Gifford had already been feeling sick and had sought medical treatment. He was diagnosed with “other inexplicable onset Diabetes Type II.”  Medical research has already confirmed the connections between PCB exposure and onset of diabetes.

Gifford filed a workers compensation claim relating to the exposure on July 18, 2019. As of the date of the complaint, the claim was denied and “delayed in a sea of bureaucratic red tape. In this way, the City of Seattle is failing Officer Gifford, and likely other exposed individuals, and failing to protect the health of the front line officers serving this community during the time of the ongoing homeless crisis.”

The complaint alleges that the City has caused the injuries to Gifford by allowing the camp to exist and creating a nuisance to the community. They put him further in harm’s way by assigning him to clean up the camp without providing him with any warning, safety equipment or training. In fact, Gifford kept his contaminated boots in his patrol vehicle for months.

The City of Seattle has known about the PCBs since 2016. The City is currently suing Monsanto, the sole producer of PCBs. Here are some of the allegations in the federal lawsuit: 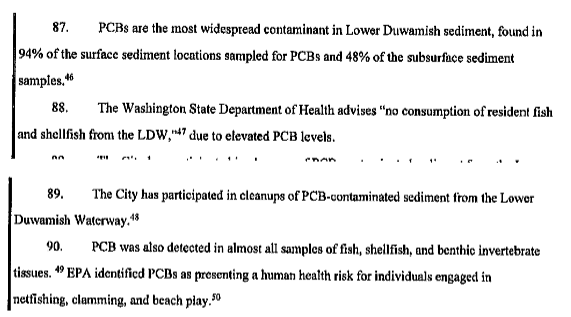 It is suspected that a previous homeless resident was the cause of the PCB exposure due to tampering with electrical equipment.

The complaint also alleges that the City was negligent by sending Gifford to clean up the camp and further negligent by “failing to streamline access to medical support and care.”

The suit is requesting general and specific damages, attorneys fees and costs, and applicable interest on any judgment.

At a point in time where there are more homeless camps across the United States, this case could factor into other lawsuits that may result from similar situations, and will be updated as it moves forward.