March 8, 2020 – Without any prior notice, smoke and the smell of burning started blanketing the streets of Northern Virginia. Reddit posters began asking about this around 2:00 pm est. We can smell and see it when we walk out our front door.

One Redditor asked “Is there a forest fire in Fairfax?” 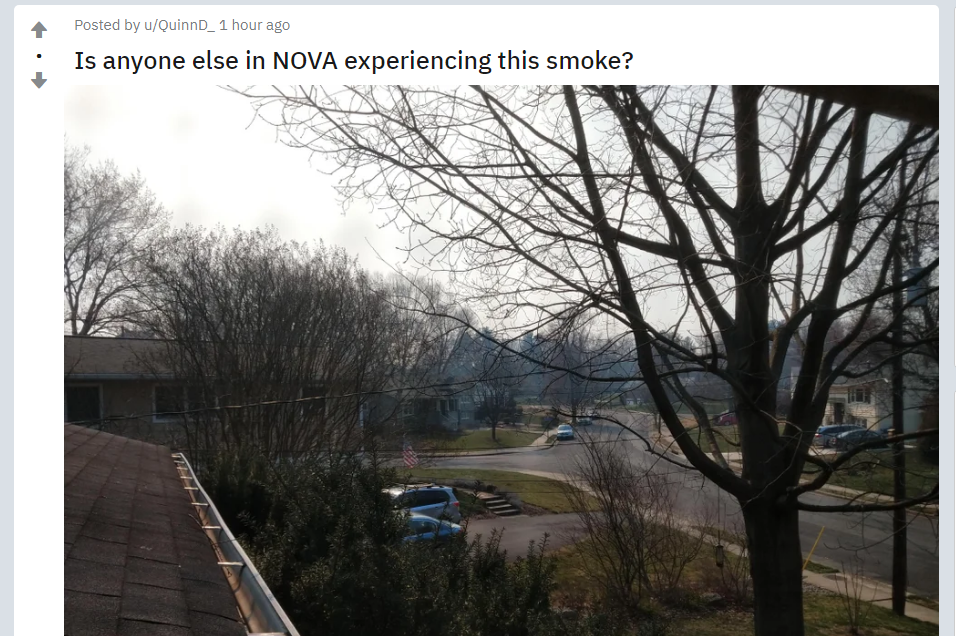 Another Reddit user asked “Is anyone else in NOVA experiencing this smoke?”

Arlington County Police Department addressed the smoke in a tweet:

ADVISORY ⚠️: The U.S. Forest Service is conducting a controlled burn of approximately 2,000 acres of land in the area of Quantico, VA. Due to shifting winds, you may notice an odor of burning or the presence of smoke outside. The burn is expected to last 2 days.@Arlingtonfire

Without prior notice, the U.S. Forest Service is conducting a controlled burn of around 2000 acres of land in the area of Quantico, Virginia and that the burn will last two (2) days.

Here are the current smokey conditions over Arlington County & Northwest DC. I've alerted @dcfireems about the Quantico burn. They're running a bunch of calls because of it. @ArlingtonVaFD @ARLnowDOTcom @ArlingtonVA @WTOPtraffic @WTOP @ffxfirerescue pic.twitter.com/9A51gjEEOZ

You can see the smoke which looks like a dense fog.

Marine Corps Base Quantico is conducting a controlled burn near the Stafford and Fauquier County Line. Due to current weather conditions, moderate to heavy smoke from this controlled burn is travelling in to Prince William County. https://t.co/suVPiB4gNa pic.twitter.com/926sueLq4B

Prince William County Police Department posted a tweet claiming the controlled burn was being conducted by Marine Base Quantico.

There were also reports, hours before this controlled burn, that a Marine had contracted CoronaVirus at this base.

This is unusual because whenever they have done these controlled burns in the past, they always put out advance notices. This time they did not.

According to an article by Mark Hand of Patch:

QUANTICO, VA — A controlled burn occurring at Marine Corps Base Quantico Sunday afternoon near the Stafford and Fauquier county line is causing moderate to heavy smoke conditions in Prince William County and other areas of Northern Virginia. The U.S. Forest Service is conducting the controlled burn of about 2,000 acres in the area.

Individuals with respiratory illnesses or medical conditions that are aggravated by smoke should remain indoors until smoke conditions clear, according to the Prince William County Police Department. The controlled burn is expected to last two days.

Prince William County Fire and Rescue officials are in contact with Marine Corps Base Quantico officials about the fire. The police are asking resident not to call 911 to report smoke in the area unless the smoke or flames are coming from inside or near a structure.

Does the controlled burn have anything to do with the CoronaVirus reports? We have read that recent reports on the virus claim high temperatures help slow the spread of the virus.

Smoke from a fire near the border of Prince William, Fauquier, and Stafford Counties is showing up on our radar and satellite. It looks like low level clouds in this picture but it is actually a smoke plume. pic.twitter.com/GDHhWlFAnR 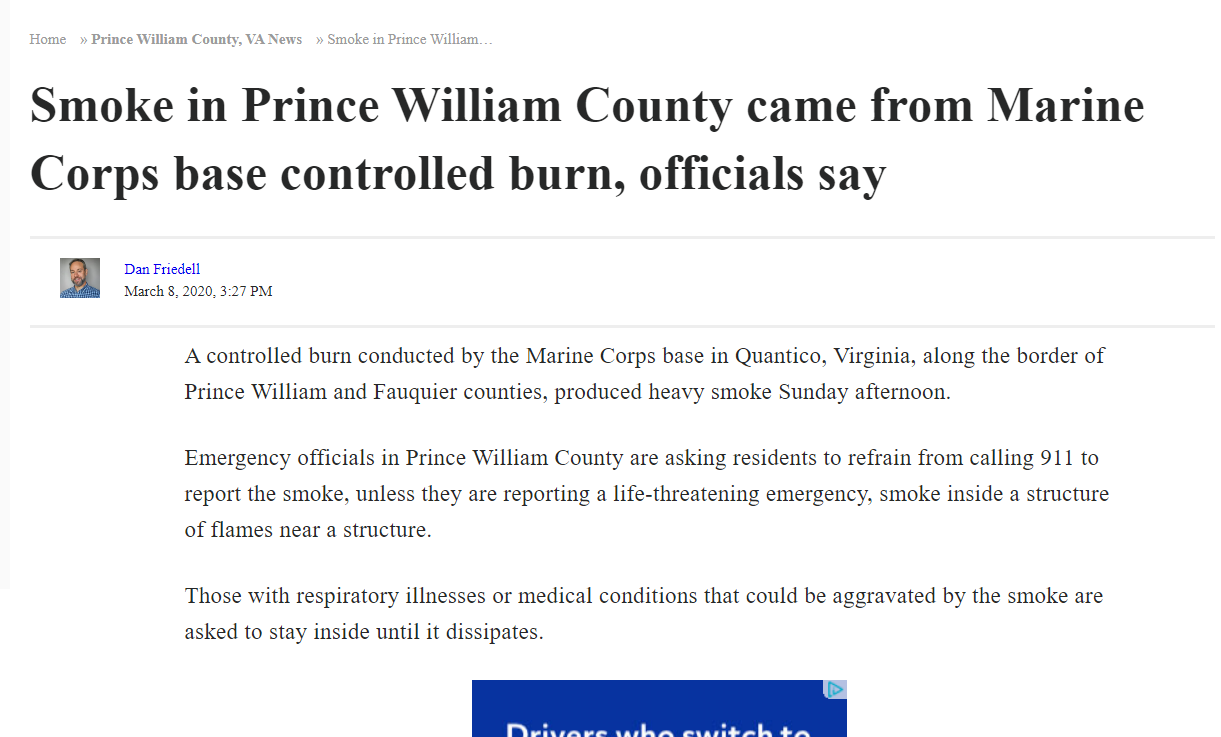 WTOP also reporting that the smoke was coming from the Marine Base.

Inside NOVA is reporting on the CoronaVirus cases in Virginia, in an article entitled ‘UPDATED: Health officials working to identify close contacts of No. Va. COVID-19 patients‘ they mention one of those affected was a Marine from the Quantico base:

Health officials in Prince William and Fairfax counties are working to identify close contacts of two Northern Virginia patients who have tested positive for the coronavirus COVID-19.

One patient, a resident of Fairfax City, is in their 80s and  traveled on a similar Nile River cruise as other positive coronavirus patients, the Virginia Department of Health said at a news conference Sunday afternoon.

The patient began to develop symptoms of respiratory illness on Feb. 28, was hospitalized on March 5, and remains in stable condition.

Health officials have not released any details on the patient’s condition, but said the Marine is being treated in isolation in accordance with CDC guidelines.

The tests are ‘presumptive’ positives, meaning the individuals have at least one respiratory specimen that tested positive for the virus that causes COVID-19 at a state or local laboratory, according to the Centers for Disease Control. All state tests must be confirmed by the CDC.

Both Northern Virginia cases were exposed through international travel.

Health officials said it doesn’t appear either patient exposed any school-age children or large groups of people to the illness. The risk of exposure remains low, officials said.

‘The Virginia Department of Health has been on high alert for possible cases of residents with COVID-19. Along with our hospitals and healthcare provider partners across the state, we are working hard to identify possible cases. We are working closely with the CDC and local health departments to investigate cases and prevent possible transmission of the virus,’ said State Health Commissioner, M. Norman Oliver, MD, MA.

For the Fairfax City patient, test results for common respiratory infections, including the flu, were negative. After consultation with VDH, and based on the resident’s symptoms and known exposures, specimens were collected and sent to the Virginia state laboratory for testing for COVID-19 on March 6. The positive result returned Saturday. – Inside Nova

As you can see, Prince William and Fairfax county is where the COVID-19 reported cases are from, as well as Quantico Marine Base, and this is also where the thicket smoke can be seen. This is not to say there is a connection, but it certainly is coincidental at the very least.

I also found that just yesterday, the Marines issued a warning and guidelines on the Virus:

Yes, most virus infections are coming from air travel across the county and world. Look at the virus map of cases, they are near major airports. These airlines needs to be shut down for at least 30 days or until warmer weather comes, to help kill out the virus..