Fixing the economy after COVID is a non-partisan dilemma. So why is Northam treating the public weal as a partisan-led cash handout?

July 13, 2021 – Michael Martz with the Richmond Times-Dispatch writes on Governor Ralph Northam’s ham-fisted attempt to use the public trust for partisan gain with a $350 million rescue package paid for by John and Jane Q. Taxpayer.

The proposed package also includes the help requested by Virginia Tourism President Rita McClenny, who appeared before the House and Senate budget committees this year to make the case for aid to the tourism and hospitality industry.

Those businesses employ about 10% of workers but represent 45% of the jobs lost during the pandemic, she told Senate Finance in May. “We want to prepare our communities to open their doors to visitors.”

Of course, the commonwealth is awash in federal COVID relief to the tune of $4.3 billion dollars. One might even be encouraged to think that Northam — true to the spirit of pandemic — might even be inclined to treat the public relief as a public opportunity to show public solidarity with all Virginians.

Instead, Northam and the Virginia Democrats chose to turn a taxpayer-fueled bailout into a partisan romp.

Northam unveiled the $353 million package with House Speaker Eileen Filler-Corn, D-Fairfax, and Senate Majority Leader Dick Saslaw, D-Fairfax, at the beach resort city in a show of unity as the General Assembly prepares to convene on Aug. 2 to determine how to spend the state’s share of the $1.9 trillion American Rescue Plan Act that Democrats passed in Congress.

Who else was there, you ask?

Speaker Eileen Filler-Corn (D-Fairfax) was double sure to make certain it was on only-Democrats announcement:

Now I don’t know about the rest of the world. But taking $4 billion in federal taxpayer bailout dollars after a once-in-100 year pandemic and using these public funds for a partisan speaking tour seems corrupt. Not in the sense of actual corruption in the legal sense, but a moral corruption that refuses to get through the tough times together as one.

That strikes me as a disgusting new low for those keen enough to pick up on the gambit. Not able to run on their record, Virginia Democrats have chosen to take advantage of the public credit card and spend it on your behalf — as if they were doing the rest of us a favor.

One might be led to believe that these problems impact all Virginians and would require a ministry of all talents to tackle them. You would be right, yet our politicians (and our political climate) doesn’t serve this purpose to any degree. When we miss these opportunities for rank partisan gain? We should heap every single red hot coal of contempt upon their heads for doing so.

So much for moonwalking things back. But why focus on Virginia Beach and Williamsburg? Why did Youngkin during the nomination contest start with and focus on Hampton Roads as a base of support? Why is Northam desperately trying to throw cash at businesses and community leaders large and small — campaigning with the public trust, if you will?

I want to share with you a few startling numbers, first and foremost with the tourism industry in Virginia and the loss of low-income jobs related to that industry, and then second with the absolute hammering small businesses took during the pandemic.

Tourism and hospitality employ roughly 85,000 people in the Hampton Roads area, consisting of about 11.4% of the economy. Roughly 5% of the region’s GDP is dependent upon tourism and hospitality — more than $4bn annually resulting in $150 million in tax revenue to localities for schools, deputies and public safety.

Where do people go? Virginia Beach and Williamsburg.

Statewide, this number was north of $25.8 billion in Virginia in 2018. While one might be temporarily deceived by the V-shaped nature of the recovery in places such as Hampton Roads, the nature of the recovery is very much one sided — leaning very much to the larger businesses where the economic crisis could be weathered and against both small businesses and lower-income families where $15/hr wages are affordable if you are McDonalds or Wendys, but not so much if you are the struggling mom-and-pop firm just trying to get by.

This is the graphic that is going to make you equal parts shocked and angry: 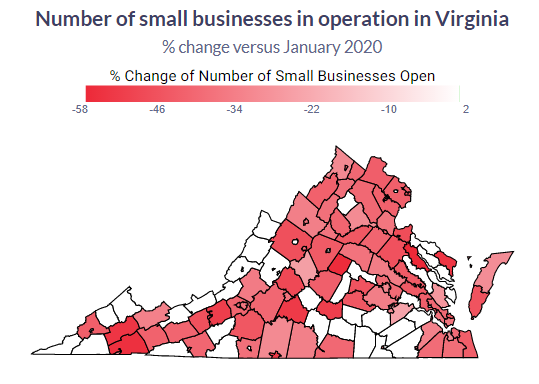