The sleeping giant in America is awaking. Massive crowds gathered to support the president.  Voter fraud evidence has been gathered with more surfaces every day. New whistleblowers come forward daily.  Lawsuits have been filed and resistance from the Left has sprung up.

Massive crowds gathered from around the country in Washington DC on Saturday November 14 to protest the 2020 election voter fraud and to support President Donald J. Trump. 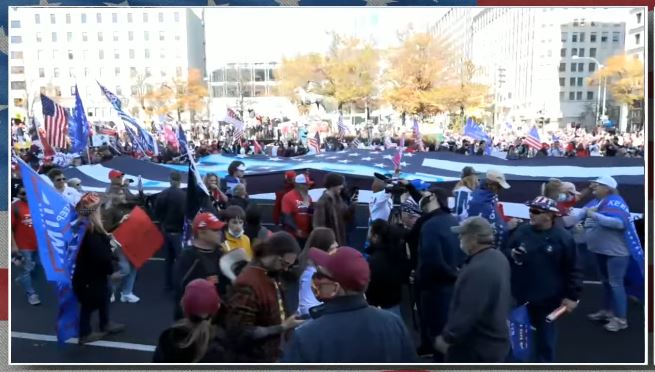 The globalists agenda has taken more of our freedoms away.  Big Tech giants’ purge of social media accounts  by locking down and banning were stepped up before and after the 2020 election.  Anyone who did not go along with their agenda was a target.  If you plan on speaking the truth on their platform, be prepared to be censored.

A mountain of evidence of voter fraud has been gathered in sworn affidavits.  Plans of action against those responsible for fraud will be exposed.  The wheels of justice sometimes move slowly.  We must never give up, but stand our ground and pray for our country.

It’s our generation that must come together, take a stand and get involved.  It’s now or never.  We cannot ask the next generation to do what needs to be done now.  God has given us a powerful leader.  Let’s unite behind President Donald Trump, stand strong, expose evil doers and claim our election victory.

Trump’s legal team has been working nonstop, gathering evidence that shows voter fraud in the 2020 Presidential Election in many states.  One of his legal team members, Sidney Powell, has been exposing the fraud on news shows since Friday November 13. 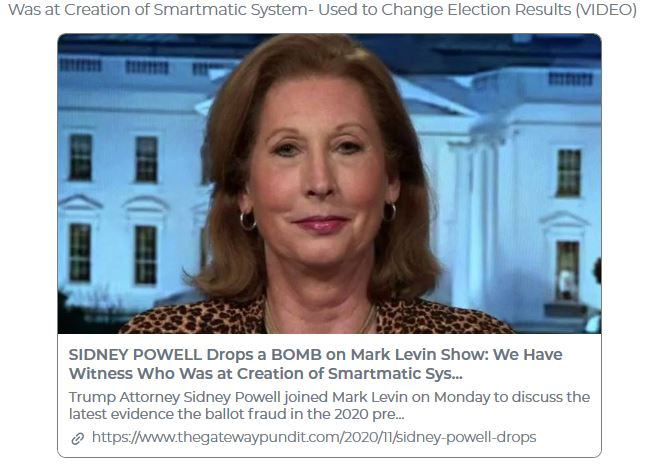 Sidney Powell: “I’ve got a firsthand witness.  In fact I’ve just emailed you an affidavit from a witness who can now be used publicly. It’s redacted in some places but he was present for the creation of the system for this specific purpose of falsifying election results for Hugo Chavez and then Maduro. They exported this all over Latin America .  It’s the Smartmatic and Dominion systems that were built to do this very thing, for changing the results of elections…   And he realized when things were happening the way they were here, particularly with the states they suddenly went down, they stopped counting the votes.  It was because the lead was so great to President Trump that they had to go in and do a separate reset on the machines to have them come out for Biden.”

Attacks from the Left erupted after the Trump Rally March on Saturday.  An older man was pushed off his modernized bike and assaulted several times by BLM & ANTIFA members.  The violence of the far Left is growing and must be stopped.

There is no doubt the voting fraud occurred and was very serious. It must be fixed or the American voters never again will trust it. We must come together, support President Trump and his team to take our county back from the cheats, frauds and corrupt actors. The voting system needs disinfecting — from the registration process, including Voter ID, through vote casting, and vote tallying.

The Patriots are mad!   They are not going to take it anymore!  Enough is enough!  Time to get on board, take a stand and support Donald J. Trump, so on Inauguration day, we can loudly cheer him on for four more years .

America is in the biggest fight for the soul of our nation!  We won’t back down!