Rowan Olsen, 19, tried to barricade officers inside the courthouse at the riot. After the glass shattered, militants threw an explosive firework inside the building. In a statement, Olsen said he's peaceful. He was convicted last year of attacking police. https://t.co/OAX8VfFX3t pic.twitter.com/nHaPWDfws1

As reporter Andy Ngo explains, essentially the Portland Police Department was told to back down when it comes to ANTIFA and Black Lives Matter. Local political officials are sympathetic to the group, and have clearly endorsed the insurgency.

One of the most disturbing things about these extremist groups, ANTIFA and Black Lives Matter, is the diversity of the membership. You have ivy league attorneys, school teachers, homeless people, and college kids — all part of the terror group “ecosystem.” This gives them considerable breadth, tremendous power and access to political power.

This is one of the things that was pointed out by U.S. Army Col. Sean Hunt Kuester in his report about strategic shocks and fourth generational warfare, and the use of low-tech means to attack in urban areas. You can also see that some of these terrorists have been arrested before, only to be released back into the population. One of the ANTIFA terrorists had the ingredients to make an Improvised Explosive Device (IED).

Again, terrorists were assaulting Federal officers, and possessing pipe bombs parts. The MSM simply will not report this part of the story. “Peaceful protesters” do not carry pipe bombs and IEDs.

These are the weapons found on Christopher Fellini at the #antifa riot in Portland after he allegedly assaulted a federal officer.

Why would you bring mace and a knife to a “peaceful protest?” Fellini already has a previous arrest from another antifa riot in 2017. pic.twitter.com/yt3AyAkygT

One of the ANTIFA terrorists had a machete with him, and the other assaulted a federal officer.

Benjamin Eagles Wood-Pavicich, a 21-year-old male to female transsexual, was arrested by U.S. Marshals at a violent #antifa protest in Portland on 7 July. She was charged with assault of a federal officer. She's a student at the private Reed College. https://t.co/G3n3AxP5xW pic.twitter.com/VMNlrglSDF

Two violent extremists are “students” at Reed College. This is another thing that must be taken into account, the use of college campuses to recruit, indoctrinate and militantly train them.

A professional day job does not preclude one from becoming a domestic terrorist, as is a financial analyst with an MBA degree. Another example: the “journalists” who dox conservatives so that their ANTIFA friends can attack them. They also cover up the crimes of ANTIFA which is key to maintaining a “clean” public image. They refer to them as “peaceful protesters” and when they do have to cover them, they will claim the terrorists are the victims, never the aggressor.

Zachary Roy Duffly, a 44-year-old Portland-area attorney, was arrested & charged by federal authorities at the antifa/BLM riot at the Portland federal courthouse on 21 July. He was released by court order. #PortlandRiots https://t.co/DwbW9bSPoj https://t.co/OXb5dzB9oS pic.twitter.com/aSCvPkHt79

Two lawyers were arrested for taking part in these violent protests.

Paul Anton Furst, 22, was arrested & charged by federal authorities at the antifa/BLM riot on 21 July at the Portland federal courthouse. He has been released on a court order. He's been at many of the violent protests in recent weeks. https://t.co/ePF4Xd8Lve #PortlandRiots pic.twitter.com/aYbCMa2KgJ

Here we have the derailing of normal procedures of arrest, charge, trial, punishment, all serving as deterrents. The real problem is the suspension of law process just for ANTIFA. 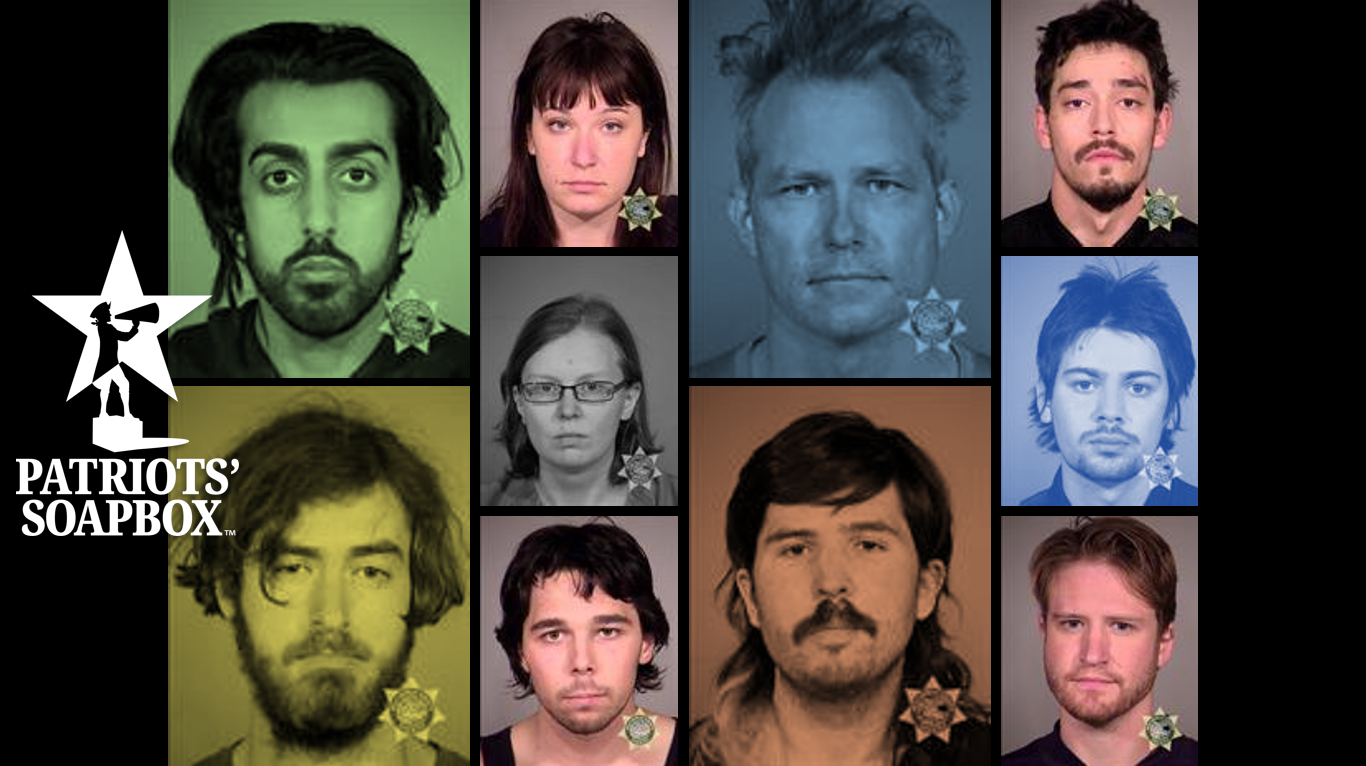 Here are the faces of Antifa.

Rioters carrying shields rush back to the Portland federal courthouse after law enforcement return inside. Rioters cheer and celebrate, claiming it to be a battle victory. #PortlandRiots #antifa pic.twitter.com/UORcZiuOBW

The insurgency against Federal buildings in Portland continues.

Antifa black bloc militant beats up BLM supporting photographer @MasonLakePhoto. Mason Lake was accused of communicating with Portland Police and a bounty had been put on him on social media by #antifa. #PortlandRiots pic.twitter.com/pwvtWMpUeC

A violent militant attacked a photographer.

Federal law enforcement moved in & pushed & tackled rioters away from the Portland federal courthouse after they kept returning & trying to break inside. After rioters broke the glass under the wood barrier, officers rushed in. #antifa #PortlandRiots pic.twitter.com/PhfEvdffu5

The domestic terrorists attempted to breach the Federal building again.

One of the support roles for those who help #antifa rioters is to drive around & resupply them and/or block the streets to slow movement of law enforcement. They do this with cars & also motorcycles. Here, federal officers confront a driver. #PortlandRiots pic.twitter.com/0il8EznOXd

Proving that ANTIFA is indeed organized, militant and using technology and encrypted apps to communicate, there is no other way to explain how these vehicles are able to show up with “supplies” and “reinforcements.”

Meanwhile, across the country in Denver, Colorado Antifa and Black Lives Matter are engaged in the same kinds of behavior, attacking journalists.

Michelle Malkin, a well known journalist was attacked by a mob, and the Denver Police were told to “stand down.”

4/"Nobody should be shocked by this…Democratic leadership is tacitly using Antifa as their paramilitary force against average Americans, whom they view as irredeemably racist." – Revolver News https://t.co/DekBfQAfbR

Malkin claims, and I believe she is correct, that the Democrat party uses ANTIFA and BLM as the paramilitary wing of their party, and as such they protect them. We see this in Democrat run cities and states around the country, letting these people get away with terrorist activity.

6/ The lawless rule over the law-abiding in the Disunited State of #Anarchotyranny ==>https://t.co/2T9Fx6si3H

They have no right to attack an investigative reporter, simply because they don’t like her and her political views. Please see Michelle Malkin’s article on this attack, in “One Nation Under Anarcho-Tyranny.”

Antifa got away with murder. https://t.co/VOgb3XNMmn

This story is so sad. Over a month after the fact, the charred remains of a human being was found in one of the buildings torched in the George Floyd protests.

This shows I was correct about the guerrilla tactics, these are not real “moms” — they are ANTIFA terrorists who have proclaimed that they want cops “dead.”

Joe Biden is also endorsing and condoning the violent extremists on their terror campaign across the nation.

Don’t you ever tell me these are “peaceful” protesters again. For months me and my fellow patriots rallied during quarantine for our basic rights loaded up with flags and guns…not one single instance of violence. Everytime the Left “protest” it turns into the damn Purge. https://t.co/MyUU0VH6uE

You can see the communists “black fist” vandalized on the building.

The lawyer who was arrested & federally charged w/assaulting an officer in Portland now claims she was sexually assaulted by one at the scene of the riot.

"Is this the day I get raped against the building?" she recalls in a new interview. https://t.co/AGIcrPxAZH https://t.co/tERhFtwcQU

One of the ANTIFA terrorists claims she was also sexually assaulted. This is not surprising as there were a slew of rapes during the Occupy protests. It’s a situation ripe for sexual assault because often police are not able to get into these occupied “zones.”

Sadly with many Democrat politicians and government officials unwilling to press charges or pursue these terrorists through the law, we can only expect the violence to get worse. We will continue to keep you updated as more information comes in.