June 24, 2020 – With the most recent revelations in the Russia Collusion sham investigations, it has become obvious that this was a political spying operation being run from the top down. Newly released by the Justice Department, the January 4, 2017 notes of FBI Agent Peter Strzok regarding the Flynn/Kislyak telephone calls seem to indicate Obama was the one directing these operations.

FLASHBACK:@MariaBartiromo: “So you think this goes all the way up to the top to President Obama?”@SidneyPowell1: “Absolutely”

Now we know she was right.#ObamaGate

When asked by Fox News’ Maria Bartiromo if she believed this went all the way up to Obama, Sidney Powell, attorney for Lt. Gen. Michael T. Flynn, responded unequivocably, “absolutely.”

Susan Rice's email was a cover story to say Obama was interested in counterintelligence only, and not criminal. But Obama knew full well he was giving FBI a pretext for a criminal investigation. From Rice's book, notice how careful she is to differentiate between the two: pic.twitter.com/86VdJ2NloG

This is deeply damning to the upper echelons of the Obama regime.

The Peter Strzok notes make the claim that Joe Biden “personally raised the idea of the Logan Act” against General Flynn, which directly contradicts prior claims by Biden that he had no knowledge of the Flynn case. Strzok also wrote down that Obama directly ordered the investigation into Flynn, requesting the FBI to “have the right people on the case.”

Calling into the Rush Limbaugh Radio Show, Lt. Gen. Michael T. Flynn reacted to the move earlier today by the DC Circuit Court of Appeals Ordering Judge Emmet Sullivan to DISMISS the case against him.

Even President Trump is referring to this as Treason. According to an article by John Solomon with Just The News:

‘Treason.’ That was President Trump’s blunt, some would say jarring, response in an interview Monday when prompted to specify the crime encompassed by the myriad abuses committed in the now-debunked Russia collusion probe set in motion by the Obama administration — a 3-year ordeal that plagued the Trump 2016 campaign, presidential transition, and presidency.

(‘Just found out that Obama had my ‘wires tapped’ in Trump Tower just before the victory,’ Trump wrote in a March 4, 2017 tweet that was much-derided at the time.)

The president let fly with his unfiltered broadside against his predecessor toward the end of a wide-ranging, 20-minute interview at the White House, on the West Wing Colonnade outside the Oval Office.

U.S. Attorney John Durham has been tasked by Attorney General William Barr with investigating the origins of the much-hyped, now-discredited narrative that the Trump campaign conspired with Russia to hijack the 2016 presidential election. Part of the focus is expected to center on what actions former Obama administration officials took surrounding the Russia probe during the election and in the presidential transition interval following Trump’s unexpected victory. Those findings are expected to be released sometime this summer.

‘I never met Durham because I want to stay out of it because otherwise, it’s going to look political, but as you know, Durham is a highly respected person, and Bill Barr is doing a great job as Attorney General,’ said the president. ‘Let’s see what they come up with, but they don’t have to tell me. All I have to do is read the papers — the ‘insurance policy’: ‘In case she doesn’t win, we have an insurance policy.’ Now we’ve caught them.’

The probe being conducted by highly respected U.S. Attorney John Durham into the origins of the Russia probe has now morphed into a criminal investigation.

If the notes are from January 3rd or 4th, then Sally Yates lied to the Mueller team that she first learned about the Kislyak call during a January 5th meeting. Mueller threw the book at Papadopoulos for getting a date wrong, but let Obama people walk!https://t.co/NQRcKgLS2I

Sally Yates needs to be called in to explain whether or not she lied under oath to Congressional investigators.

Unfortunately, this is not the first time Democrats, and specifically Obama have been called out for spying, and political spying. Michael Hastings, an investigative journalist for Buzzfeed published an article back in 2013 entitled “Why Democrats Love to Spy on Americans.” It was the last article he would write before his untimely and suspicious death. 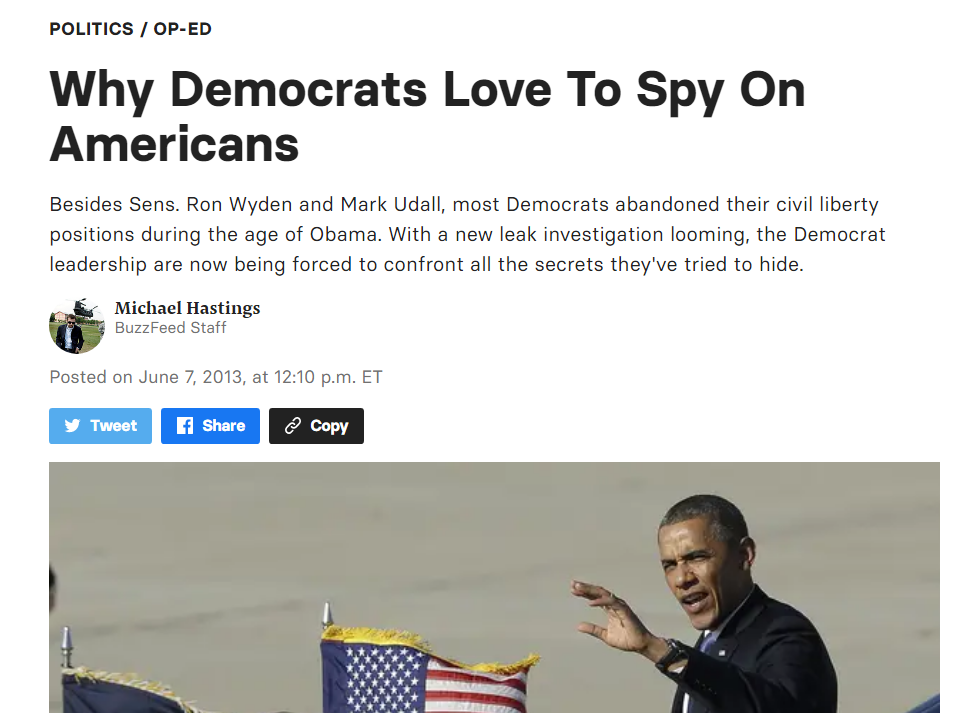 Here is a quick excerpt from that article:

The very topic of Democratic two-facedness on civil liberties is one of the most important issues that Greenwald has covered. Many of those Dems — including the sitting President Barack Obama, Senator Carl Levin, and Secretary of State John Kerry — have now become the stewards and enhancers of programs that appear to dwarf any of the spying scandals that broke during the Bush years, the very same scandals they used as wedge issues to win elections in the Congressional elections 2006 and the presidential primary of 2007-2008.

Recall what Senator Levin told CNN in 2005, demanding to ‘urgently hold an inquiry’ into what was supposedly President Bush’s domestic wiretap program.

Levin continued, at length: ‘It means that there’s some growing concern on Capitol Hill about a program which seems to be so totally unauthorized and unexplained… The president wraps himself in the law, saying that it is totally legal, but he doesn’t give what the legal basis is for this. He avoided using the law, which we provided to the president, where even when there is an emergency and there’s a need for urgent action can first tap the wire and then go to a court.’

His ally in Oregon, Ron Wyden, was one of the first to seize on the Guardian‘s news break: ‘I will tell you from a policy standpoint, when a law-abiding citizen makes a call, they expect that who they call, when they call and where they call from will be kept private,’ Wyden said to Politico, noting ‘there’s going to be a big debate about this.’ The Director of National Intelligence, James Clapper, admitted he’d misled Senator Wyden at a hearing earlier this year, revising his statement yesterday to state that the NSA didn’t do ‘voyeuristic’ surveillance.

The state of affairs, in other words, is so grave that two sitting senators went as close as they could to violating their unconstitutional security oaths in order to warn the country of information that otherwise would not have been declassified until April of 2038, according to the Verizon court order obtained by Greenwald.

Now, we’re about to see if the Obama administration’s version of the national security state will begin to eat itself.

Unsurprisingly, the White House has dug in, calling their North Korea-esque tools ‘essential’ to stop terrorism, and loathe to give up the political edge they’ve seized for Democrats on national security issues under Obama’s leadership. The AP spying scandal — which the administration attempted to downplay at the time, even appointing Eric Holder to lead his own investigation into himself —was one of the unexpected consequences of one of two leak investigations that Obama ordered during the 2012 campaign. – Michael Hastings, Buzzfeed

That 2013 Hastings article lays out clearly the Obama regime’s fascination with spying on the American people. They were obviously engaging in widespread domestic spying that apparently never stopped. If you are not familiar with these scandals I recommend reading the Hastings piece in full. It foretold the 2016 SpyGate saga, unfortunately. It’s accuracy can arguably be said to have sealed Hastings’ ultimate fate.

According to Economist Martin Armstrong:

Michael Hastings was the journalist exposing the surveillance state. Hastings wrote about the investigation of reporters by the U.S. Department of Justice back in 2013. He said that the restrictions on the freedom of the press by the Obama administration were a ‘war’ on journalism.  He wrote his last story before he died in what may have been a cyber attack. Someone was able to control his car remotely and drove it into a tree at top speed. His last story was entitled: ‘Why Democrats Love to Spy On Americans’, published by BuzzFeed on June 7, 2013. Any journalist who goes for the truth about the Deep State seems to end up dead. Hastings wrote that ‘the entire caste of current Democratic leaders as a gang of civil liberty opportunists.’

Hastings exposed how the Obama Administration hunted and prosecuted anyone who would leak information about their unconstitutional conduct. Obama even put in prison John Kirakou, formerly in the CIA, who raised concerns about the agency’s torture program. Indeed, the Deep State came into full power under the Obama Administration. It was then used against Trump during the 2016 election. This was way beyond Watergate under Nixon. But the standards have changed so much, that not even Trump can investigate because he has to use the very same agencies who will protect themselves.

Hastings died in a fiery high-speed automobile crash on June 18th, 2013, in Los Angeles. Today, cars connected with GPS can actually be hacked. It is possible to take control of your car, right down to the steering wheel, remotely. WIRED Magazine has proven this ability, which many others have confirmed. The likelihood that Hastings was killed remotely in an auto cyber attack is extremely high. – Martin Armstrong

Indeed it seems Hastings was a victim of the Deep State, and the article he was working on about John Brennan, Obama’s CIA Director, remains unpublished.

Finally, from an article in the Federalist by Sean Davis and Mollie Hemmingway entitled “Explosive New FBI Notes Confirm Obama Directed Anti-Flynn Operation.” perhaps the jig is finally up for Obama:

… According to Strzok’s notes, Biden explicitly referenced the Logan Act, an 18th-century law that forbids certain political speech from private citizens. The law, even if it were constitutional, would not apply to a national security adviser for the newly elected president of the United States. Biden had previously denied that he knew anything about the investigation into Flynn. – The Federalist

As is evidenced from the older reporting by Michael Hastings, the Obama administration clearly was violating the civil liberties of America citizens and engaging in a massive domestic spying operation. This provides an historic precedent for the kinds of operations John Brennan and others in the Obama administration would employ again in the 2016 Presidential Elections. Every single member of the Obama regime who was involved in the Russia Collusion hoax bears investigation and charging.  Start with the leader: Barack Hussein Obama.