January 22, 2021 – Once again the Democrats have shown their disdain for the American people, the Military and National Guard and any and all forms of patriotism. In their typical elitist style, the Democrats used our Military and National Guard as political props to be discarded when their presence and performance were no longer needed. Ironically, the ruling class treats our troops exactly the same way they treat our citizens — as disposable. They send the very best of our young men and women overseas to die on behalf of corporate interests and empire. After using them for photo ops and a show of raw power during the inauguration of an illegitimate president, over 5000 National Guardsmen (and women) were kicked out of the Capital and relegated to sleep in a parking garage with one electrical outlet and one bathroom.

This is how @JoeBiden treats our military. Shameful! https://t.co/F3b6DbSS1H

Joe Biden doesn’t give a damn about our troops. On his first day in the White House, he decided to send them back into the killing fields of Syria for his Zionist masters.

Reports of shabby treatment of National Guard troops at the U.S. Capitol were sparking bipartisan outrage among lawmakers and other officials Thursday — with Texas Gov. Greg Abbott calling for the return home of his state’s Guard members.

Thousands of National Guard troops from several states had deployed to the U.S. Capitol to protect Wednesday’s inauguration of President Biden against threats of violence following the Jan. 6 riot.

Photos of Guard members sleeping on the marble floors of the Capitol quickly went viral — until they later received cots. Then on Thursday came another insult: According to reports, the Guard members were abruptly told to take their break time inside a parking garage instead of inside the Capitol.

On Friday, Yogananda Pittman, acting chief of the U.S. Capitol Police, said in a statement that ‘with the exception of specific times on Inauguration Day itself while the swearing-in ceremonies were underway, the United States Capitol police did not instruct the National Guard to vacate the Capitol Building facilities.’

The Guardsmen, who had been resting inside the Capitol between 12-hour shifts, were moved to a nearby parking garage where photos obtained by Politico and other outlets showed members crowded together on the ground — some resting their heads against cement pillars.

By Thursday evening, Abbott was among those who had apparently seen enough.

Lawmakers did not care about the troops’ accommodations until they were caught imposing them, and the news started blowing up on social media. Had that not happened they wouldn’t have lifted a finger in support of the people who are tasked to protect them.

National Guard soldiers ordered home by governors amid outrage over being moved to Capitol parking garagehttps://t.co/EafUnpQzKX

The troops never should have been deployed in such massive numbers anyway. It was all a political stunt. 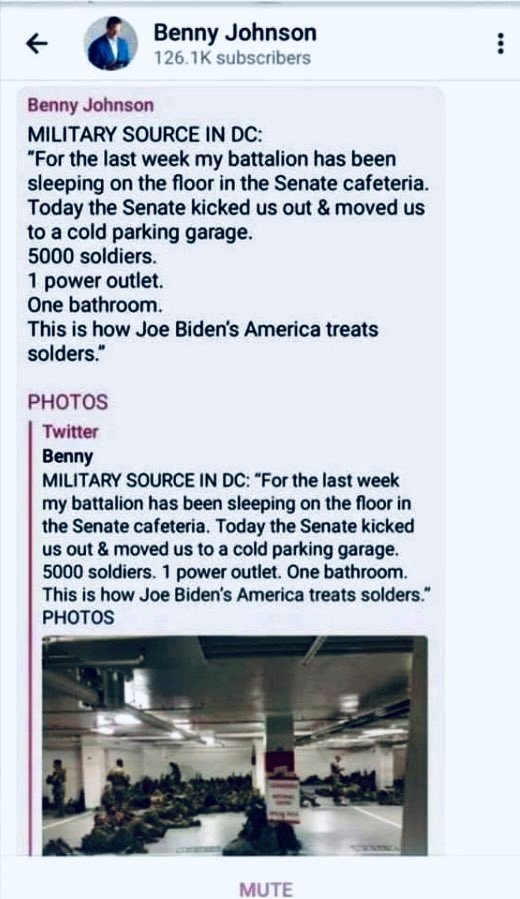 We currently find ourselves in a sad demoralizing state of affairs. All the gains made under the Trump Administration are now being systemically attacked in an attempt to return us back into a globalist empire regime.

why are they forced to sleep in a parking lot? Because they weren't Gold donors to Biden campaign, that's why. Attitude of US oligarchs is obvious: once military has cleared the reception area for US oligarchs, military can sleep on the floor like other deplorables. pic.twitter.com/DWNOn012Jh

The ruling class views our Military, National Guard and Secret Service members as a “threat” and are now currently going about decimating their ranks and removing troops for their political affiliation, e.g. if they ever voted for the GOP or President Trump. It’s a gross violation of the right of a secret ballot and blatant discrimination that follows the playbook of every communist purge in advance of a genocidal, murderous campaign. They must remove anyone who might not follow such illegal and immoral orders.

I just visited the solders who have been abandoned & insulted by our leaders. I brought them pizza and told them that they can sleep in my office.

No soldier will ever, ever sleep on a garage floor in the US Capitol while I work in Congress

Congressman Madison Cawthorn was disgusted by how our troops were being treated. He showed up, brought them pizzas, and offered his own office for them to use as a resting place. This is what a real leader looks like. He saw a problem and a moral stain and he immediately set about to solve it.

“Yesterday dozens of senators and congressmen walked down our lines taking photos, shaking our hands and thanking us for our service. Within 24 hours, they had no further use for us and banished us to the corner of a parking garage …” one Guardsman said https://t.co/2QneUNtBDe pic.twitter.com/Q8lZzP7hHV

The troops feel betrayed because they were betrayed by our ruling class, and have been betrayed by them for decades. They have been used as cannon fodder for wars that do not benefit us but actually have damaged our reputation around the world.

Hundreds of Guardsmen are laying on the concrete of a Capitol garage. Few if any bathrooms can be found. One soldier was nearly hit by a car.

“I’ve never in my entire career felt like I’ve been booted onto the curb and told, ‘figure it out on your own.’” https://t.co/BmrIMZPUsr

The Democrats and the ruling class elites they serve have no shame and do not care about the injustices they are perpetuating. They see us all as slaves and pawns to be used in their sick games to further their own wealth and interests. It’s heartbreaking to see how these good, brave and selfless men and women have been used and abused for the corrupt uniparty.

We encourage any active duty Military, National Guard or Secret Service members to reach out to us via our secure whistleblower system and share their stories about what they experienced and how it has effected them. We provide instructions on how to keep yourself safe and minimize your footprints online. If you are a family member or veteran, we implore you also to speak out about what you know and share your stories. The American people need to know how our service members are treated and mistreated.

We need people to step up and blow the whistle, so we can expose what is happening. If you were one of the several members of the National Guard removed simply because of your vote, we want to hear from you! The world is watching. Speak the truth to power.