Chances are no one saw this coming. One of our best military allies, Israel, is vying for China’s help or financial backing to upgrade its outdated infrastructure.

Maybe it isn’t all that much of a surprise that China has set its sites on Israel though. Israel was one of the stops along the Silk Road. It would appear China has decided to use the old Silk Road as a model for the One Belt One Road (OBOR) plan, sometimes referred to as the One Belt Initiative (OBI).

Indeed what China wants is to continue its plans to create a New Global Connection, where trade between countries would most likely be forced to use a Chinese seaport, roadway, or railway.

The addition of Israel to China’s New Silk Road will complete trade routes that connect all of the Southern Asia regions. China has already invested well over $250 billion infrastructure projects in Central Asia, much of which is designed to create overland connectivity with Europe.

Each country that has agreed to become a partner in the OBOR/OBI has fallen into the debt trap with China being the financial benefactor by backing investments of the infrastructure needed to complete a portion of the trade route. 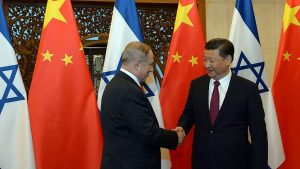 The Diplomat’s Shannon Tiezzi wrote:
Only a few days after the Saudi king departed from Beijing, the Chinese capital is playing host to another Middle Eastern leader: Prime Minister Benjamin Netanyahu of Israel. Netanyahu met with Chinese Premier Li Keqiang on Monday, followed by a meeting with President Xi Jinping on Tuesday.

Generally, the relationship between China and Israel has been constrained by both distance and geopolitics. Israel is a strong partner of the United States, while China’s historic support for the Palestinian cause has also complicated ties with the Israeli government. As recently as January 2017, Netanyahu announced that Israel would be limiting diplomatic ties with countries (including China) that supported a UN resolution denouncing Israeli settlements in Palestinian territory. (link)

However, China and Israel are both keen to increase cooperation on economic matters. For Beijing, Israel is a particularly attractive partner as China attempts to become a global leader in the high-tech sector. Israel is also a potential hub for China’s ‘Belt and Road’ initiative, given it geographic location. For now, both sides seem content to accept the necessity of more limited political and security cooperation while they attempt to harvest the benefits of an expanded economic partnership.

That diplomatic approach was given a name during Netanyahu’s visit, which saw the two sides agree to elevate their relationship to an ‘innovative comprehensive partnership.’ Innovation is the keyword: it refers to cooperation on technological breakthroughs, something China is keen to do. According to Xinhua, a joint statement released by the two countries pegs a number of fields for increased cooperation, including ‘air pollution control, waste management, environmental monitoring, water conservation, and purification, as well as hi-tech fields.’ China and Israel also plan to establish ‘a global technology transfer center, innovation parks, and an innovative cooperation center,’ Xinhua reported.

Netanyahu particularly expressed Israel’s interest in joining the Belt and Road and invited Chinese companies to participate in infrastructure projects within Israel. Both he and Li also talked of advancing negotiations on a free trade agreement, with Li promising to seek to conclude negotiations as soon as possible. (link)

Although Israel has agreements with the U.S., this turn of events has certainly brought forth even more questions of this agreement between China and Israel according to the following article from The Diplomat, written on January 10, 2017.

The Israeli Embassy in China (where a new ambassador arrived at the beginning of 2017) lost no time in reassuring the Chinese media that cooperation between China and Israel would not be affected by Netanyahu’s decision. Despite this, the Chinese public was disappointed by Netanyahu’s remarks. For quite a long time, the Chinese public has viewed Israel as a reliable partner, cemented by historical friendship. There is a general impression in China that the steps taken by Chinese people in Shanghai to help Jewish immigrants from Germany in the 1930s are remembered by every Israeli. Some Chinese articles have even called Israel “the only reliable friend for China.”

This high praise aside, China’s perceptions of Israel are mixed and complicated. On the one hand, China views Israel as a close friend of the United States, even as a satellite-state for Washington in Middle Eastern politics. The special relationship between the United States and Israel hampered diplomatic normalization between China and Israel until 1992. On the other hand, China, especially during recent years, increasingly views Israel as a reliable source of economic and technology cooperation (although some conservative Chinese Muslims have their own objections to this). China also views Israel as an important bridge to help connect China and Western states.

The progress of Chinese President Xi Jinping’s “One Belt, One Road initiative” has also promoted cooperation between China and Israel. Israel, which enjoys the reputation of a “start-up nation,” has been viewed by China as a model for “economic transformation.” When it comes to infrastructure projects in the Middle East, Israel’s reliable and stable economic and social environment is attractive to China’s construction companies. Meanwhile, the religious sites in Israel attract Chinese tourists. Numerous deals and agreements have been signed between China and Israel and Netanyahu is scheduled to visit China in early 2017.

Israeli research and innovation with China’s investments include high technology, agriculture, food, water, and biotechnology. Some say “nothing to see here,” but this is not exactly what other countries in the region are thinking.

Why would a U.S. ally enter into such agreements?

While it is true that Israel is a leader in the high-tech industry, how much of this industry has been supplied by the U.S.?

February 13, 2018 – Jewish Chronicle reported the following :
The U.S. seeks to increase aid to Israel by $200M in 2019
The requested funds are the result of a $38 billion 10-year memorandum of understanding signed between Israel and the United States at the end of President Barack Obama’s term.

The annual funding Israel receives from the United States may be increased by $200 million in 2019, according to President Donald Trump’s fiscal year budget request. Israel is expected to receive $3.3 billion in 2019.

The requested funds are the result of a $38 billion 10-year memorandum of understanding signed between Israel and the United States at the end of President Barack Obama’s term in office. The additional proposed funds are being apportioned to provide “assistance to bolster Israel’s capacity to defend itself and maintain its qualitative military edge.”

The annual funding Israel receives from the United States may be increased by $200 million in 2019, according to President Donald Trump’s fiscal year budget request. Israel is expected to receive $3.3 billion in 2019.

The requested funds are the result of a $38 billion 10-year memorandum of understanding signed between Israel and the United States at the end of President Barack Obama’s term in office. The additional proposed funds are being apportioned to provide “assistance to bolster Israel’s capacity to defend itself and maintain its qualitative military edge.”

Part of the funds will go toward “prioritizing funding for a U.S. Embassy facility in Jerusalem which will begin once design and construction plans are finalized,” according to a fact sheet released by the State Department. The administration has announced that the embassy will officially move from Tel Aviv to Jerusalem in 2019, while a new facility in the capital will take years to complete.

The budget request requires congressional approval before being finalized.

The video above gives us an unfortunate truth about why Israel has been trading U.S. Military weapons and licenses. The U.S. subsidizes Israel weapon systems, licenses, and technology. All while Israel sells the technology to China.

We, as Americans, need to pay attention to this issue as well as other Chinese investments around the world.