January 19, 2021 – A new chilling viral video by Don Winslow Films implores liberals to create an American version of the communist East German Stasi or the USSR NKVD and Cheka. While the video is intentionally vague and doesn’t outright demand the torture and mass murder of Trump supporters, it does demand a secret police organization, in the vein of the communist secret police that historically always has led to torture and murder. This video is a call to a totalitarian society under the predictable guise of “public safety” and so-called national security. President John F. Kennedy warned against the unwarranted use of national security as a subterfuge for criminal activity and then to cover it up. The video advocates for a nationwide network of “citizen informants” turning in to law enforcement and the FBI, Trump supporters and conservatives in general.

On January 20th Donald Trump will no longer be The Commander in Chief.

He will lose control of the U.S. Armed Forces and take control of a NEW ARMY. pic.twitter.com/59MHHaIegP

In just a few hours, the video has been boosted and amplified by Russiagate conspiracy theorists and has amassed millions of views. The comments section is disturbing, showing outright hate and supporting the mass murder and arrest of conservatives.

The hashtag #TrumpsNewArmy is trending on Twitter as of this writing due to the release of a horrifying video with that title from successful author and virulent Russiagater Don Winslow. As of this writing it has some 20 thousand shares and 2.6 million views on Twitter.

Any student of history examining the Soviet or East German secret police should understand that untold numbers of innocent people were imprisoned and tortured based on fabricated evidence. Many simply “disappeared” overnight. Thousands were murdered or died in prison. This is the mainstreaming of a full communist purge under the guise of “protecting society” and it’s designed to appeal to citizens who want to “do the right thing,” but are without understanding that their participation enables such mayhem.

"They are hidden among us, disguised behind regular jobs," Winslow warns. "They are your children's teachers. They work at supermarkets, malls, doctor's offices, and many are police officers and soldiers." pic.twitter.com/ZaDVZx2RzT

This is how you pave the way for the justification of mass imprisonment and mass murder. This is exactly what Stalinists did, as did Pol Pot and many tyrants before them.

Calling your political opponents traitors and evil, literally half the country, is an attempt to incite violence against them. The language of dehumanization always precedes a genocide. They call for rooting out conservatives from society completely. Where do you think that leads? History and logic provides the answer: they would all be imprisoned or killed.

They are manipulating people’s desire to protect others and be “patriotic” by encouraging them to identify and inform on conservatives so they can be hunted down. Imagine! In one single effort, the left destroys two segments of society — corrupt some in betrayal, and eliminate the others, the enemy.

An aggressively manufactured push to get an army of citizens spying on each other calls to mind the Stasi informants of East Germany, the patriotic digital "digging" of the QAnon psyop, and the NatSec LARPing of Louise Mensch Twitter, all rolled into one great big ball of crazy.

While Ms. Johnstone is not a believer in Q, she makes a great point.There is a leftwing version run by Lousie Mensch, but unlike Q, Ms. Mensch and her ilk call for violence and doxing.

Winslow himself spent six years traveling and doing research for a novel about a former CIA operative, and if some government agency didn't recruit him during that period they clearly should have. pic.twitter.com/YYdK0GKXYc

Here we have the CIA acting as the hidden hand behind this new “war on domestic terror” which is really a war against dissenting opinions and freedom of speech, association and belief.

In fact just following the trending hashtag I'm noticing Twitter users saying this means targeting all Trump supporters, so clearly that is the message that's being absorbed. pic.twitter.com/YkU1x1kOoD

For all its bloviating about “hate speech” and protecting society, Twitter is allowing half the country to be openly targeted and attacked.

We stop Trump supporters from what? Being allowed to live? 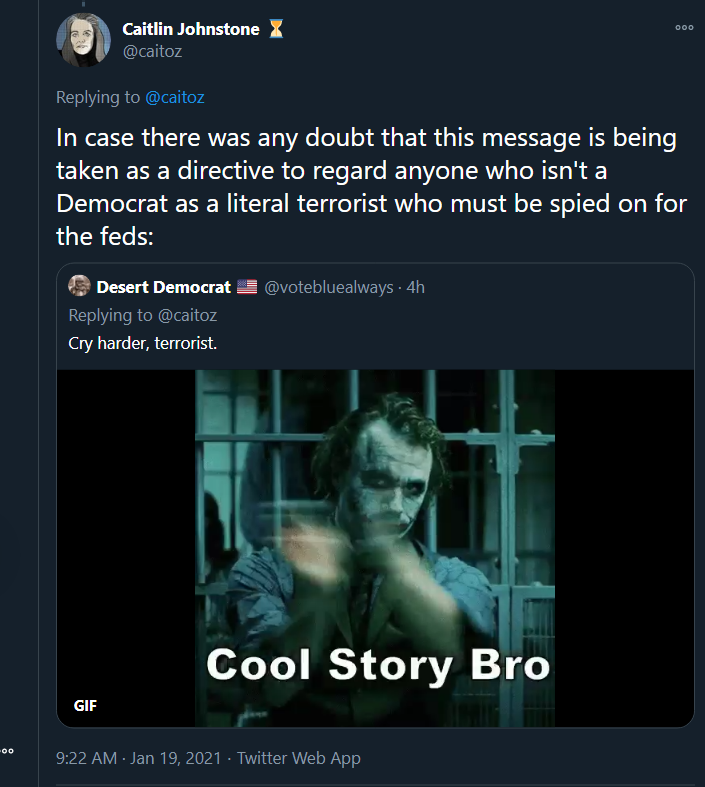 Here are Democrats labeling a journalist as a “terrorist” for not being on board with their violent extremism. They lack the self-awareness to realize they are being violent extremists while claiming to fight violent extremists. This is peak clown (CIA) world folks, and they are not going to stop. The Democrats continue to whip up their base into a murderous frenzy. If you doubt that is the message being sent to the far left, think again:

An ex-U.S. Army soldier has been arrested after allegedly threatening to kidnap and attack Trump supporters during demonstrations planned at the Florida state Capitol building https://t.co/0KZPu5HBDS

investigate and root out trump supporters from all branches of the military. Hell, time to start doing it down to the city police level, and while we're at it, time for real accountability for police for deadly force. https://t.co/Qz7Un5pPFU

Root out all Trump supporters from every level of society they say.

America or Trump. An army of citizens prepared to root out and arrest #TrumpsNewArmy in their new cause of Civil War and Right Wing Domestic Terrorism. By @donwinslow and @Eleven_Films pic.twitter.com/bRJLf2fRYz

They are calling for a civil war against Trump supporters.

Don is right. It’s up to us. Do you love this country? Fight for it. We can’t let these insurrectionists and racists take it from us. Turn them in. Fight for our democracy. #TrumpsNewArmy https://t.co/Pjo6BnSwMn

This Twitter “blue check” is calling for people to “fight” Trump supporters to “save the country” from those he deems racist.

The people who incited and attacked The U.S. Capitol in mass force and killed a cop are now telling us to unify and put it all behind us.

There has to be ACCOUNTABILITY.

There has to be CRIMINAL PROSECUTION.

No one in #TrumpsNewArmy should be given a pass. https://t.co/xrZaRP0Omd

What he’s really saying is that all Trump supporters should die.

Create a fictitious group.. demonize them.. start a lynch mob to dox them.. write a book about this new villainy.. profit.

This is exactly what this man is doing and it’s reprehensible. His call to action will be seen by the far left as a call to violence against anyone who isn’t a far left extremist. Even more grave is how much mainstream support his vile message is getting. Twitter has amplified it and allowed it to trend.

2021: You know what? China was right about authoritarian government and suppressing free speech – and we should look into having some secret police too! https://t.co/LCxctHC5Pk

The Democrats are looking to turn America into a version of China or the Soviet Union. At its peak, one in every 30 people in East Germany were agents of the Stasi and they investigated every third person in the population. Is this what we want in America?

McCabe: The Profiles of Trump Supporters Are Similar to ISIS Terrorists.https://t.co/RXPWKEyhr5

Andrew McCabe illegally spied on American citizens, and then compares them to ISIS.

In East Germany and other Soviet Bloc states, family members often had one another charged and arrested by the Stasi (communist secret police) for being enemies of the state.

"History doesn't repeat itself, but it rhymes." https://t.co/Hk6KHFcXR4

History does indeed repeat itself. However these violations of American rights have never been part of our history. But if we don’t wake up fast, we may find ourselves quickly repeating the most repressive and bloody episodes of world history.

We are under Communism now.

"As soon as the Soviet Union (Communism) extended control over a country and imposed its system … the secret police moved in and wiped out free speech."

Hopefully people will wake up to this, before too many lives are lost. The Democrats have no intention of unifying the country. They are openly calling for mass reporting and informing on conservatives and some are calling for outright murder. Former CIA and FBI like Sue Gordon and Andrew McCabe are calling conservatives terrorists like ISIS. Does that justify their murder? What did we do to ISIS? Wipe it out? That is what the Democrats are calling for, under the pretense of words like “rooting out” and “cleansing.” What they really mean is murder. All Americans need to understand: that is their end game.

Great article, thanks for all the hard work you do don’t ever give up 👏 👍 👌 🙌