Weekend Reads: What Watching Time Go By Is Like for Me

by Maggie of TheUniversalSpectator.com, posted on April 3, 2020

Editor’s Note: Maggie is a good friend of mine. In the aftermath of 9/11, we became online foxhole buddies in a suddenly scary world that forced us to ask questions we’d rarely before considered. She’s Middle America, I’m Coastal; for two decades, we’ve informed each other from different perspectives. She’s an avid movie goer and fan of SciFi and space themed films; I’m 50s musicals kinda gal, so our taste in movies is very different, except when it comes to warflicks.  She’s also a very incisive movie reviewer with a keen ability to see themes and subtlety that escape me entirely. Hope you enjoy this respite from news. ~~BK 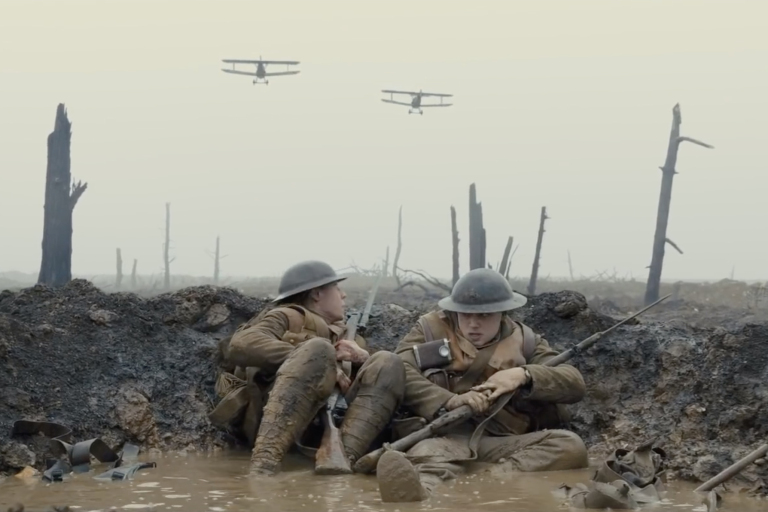 Last night we rented and watched “1917,” the WWI version (sorta-kinda) of a “Saving Private Ryan” with a hint of “Gallipoli.” It centers on two British trench soldiers tasked by the command general with a mission to run far ahead to the front line (as the ‘Hun’ have cut the phone lines they were using) and physically inform and halt that division of soldiers from attacking the Germans who’ve set up their own ‘retreat’ to bait the Brits into their deadly trap. The task is a personal one as one of the two brave but clumsy blokes has an older “Lieutenant” brother in that doomed division. The film was directed by Sam Mendes, whose Trinidadian grandfather was a WWI messenger for the British and whose war stories were the foundations for the movie’s story. The film was choreographed and shot basically to give it the feel and view of two continuous shots. The scenery was painstakingly staged with every inconceivable drabness, gore, and lifeless desolation and hopelessness that mirrored the bloody mud slop, rancid standing waters bridged with countless and discounted rotting bodies that became nothing more than part of the landscaping and plagued by feasting overgrown rats. Thus was the stark reality of the trench war of WWI Europe.

Within the first 20-30 minutes I recognized the thumbprint notes, flow and tone of the movie’s musical score as having been composed by Thomas Newman who’s music I have come to spot quickly in each movie I view that he has scored. These include “Finding Nemo”, “Finding Dory” and “Passengers” (2016 sci-fi) and “The Best Exotic Marigold Hotel” and “The Second Best Exotic Marigold Hotel” movies. It’s there. It’s just there-there when I hear it, and then I find myself pulling up the info on my iPhone in the midst of the movie to confirm my suspicions that it is, indeed, Newman’s composition in whatever movie I am watching. I actually was in the movie theater with my youngest daughter and grandkids watching “Finding Dori” when I began making the connection. It is a strange feeling to recognize the subtle print of a composer. I can only equate it to John Williams’ movie scores for the Spielberg and Lucas movie sagas. But Williams was more in-your-face unquestionably obvious. Newman’s is sort of like your ears and mind getting a faint teasing hint that you must seek out.

I pointed it out to my husband last night after the movie was over. I replayed a scene where the music was really identifiable and then quickly jumped to my DVRed “Passengers” and played the beginning scene for him to compare. His eyes got wide and he chuckled, “How’d you do that?” … How did I recognize it. I told him, “Don’t make me replay the ‘1917’ music and point it out in ‘Nemo’ and ‘Dory’” (both of which I also have DVRed, heh).

I watched the Netflix movie, “3022” (sci-fi). In the future, Earth has advanced its technology and space travel to the point of expanding the ISS program and building a refueling space station, Pangea, in orbit between Earth and Jupiter, Earth building a colony on Jupiter’s moon Europa.

A few years into their long mission the crew members, the leader in particular, begins showing signs of mental devolution, and they argue over informing Earth command to abort their mission as soon as another crew can be sent to replace them. One crew member noting that she had left her daughter, as the others had left behind family, to fulfill the mission and to quit now would mean her lost time with her would have been for nothing. I got a feel of “Leviathan” (1989) where the crew relationships were concerned, and a few other hints of other dark corners and detachment deep space movies. Anyhow, while the crew’s medical officer and the others bicker and grumble over losing their mission, and that would basically end their careers, something huge happens … not on Earth, per say, but to Earth … and the Pangea crew realizes they are the last humans left in the solar system. In later speculation the theories range from some celestial body having hit Earth and destroying it, or even the CERN project had a catastrophic malfunction. Now, what to do? What to do? What to do?

The scenes are dark and dreary. Yes, years of isolation and endless boredom would be very hard on the human psyche, and add the fact that now you can never go home because, well hell, “home” is frikkin’ gone and so are everyone you left there … no longer are you bothered by the time passage you would have faced upon return but now you are in full soul-crushing regret that you were not with your loved ones to die together. As they peer out the space station’s window that faces the direction of Earth the emptiness is quite a bit more devastatingly empty as the vague distant remains of the shock wave and disintegrated planet debris fades into blackness, as does their crushing reality. The movie bounces around with flashbacks and flash-forwards which can become a little irritating especially since the story seems to drag a bit. I had some quizzical frowning regarding some of the movie’s props and the space station’s layout and operating systems. Uh, details!

It’s not a bad movie, and if you can’t find anything to watch and have Netflix you might want to check it out. *** Stars 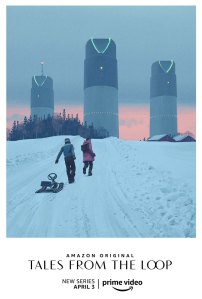 It has the scenic and prop feel of Netflix’s 1980s-era-based “Stranger Things.” It is a bit slow moving, the characters looking to be distracted and bored, especially amid the growing plot that something huge has either been invented or thrust upon them from a mysterious or even an extraterrestrial source … the “loop.” The series is inspired by Swedish artist Simon Stålenhag’s futuristic sci-fi paintings.  I had never been aware of the artist, the paintings or and the ‘game.’ The various futuristic structures and devices scattered about look very weathered and abandoned, more like antiquated prehistoric artifacts, out-of-place in the clumsy mix-and-match 1980s-ish era. The humans do not seem to know exactly what they are or where they derived from, nor do they care. However, the inquisitive youth eventually discovers some weirdness upon investigating them on their own. Also, it seems the teens, when they reach a certain age, get some sort of employment in society, with promising students becoming employed at “the loop” which is a high-tech underground facility with a rather large sphere constructed of a carbonite-looking substance that defies gravity. Again, no indication of where it came from. But in the first episode we are eventually hinted at a possibility of time or space travel … or dimension travel. Some of the structures near ‘the loop’ bunker look maybe man-made to provide for the device’s study, power-sourcing and protection. (For the device or for the people living nearby???) So far it’s not revealed if ‘the loop’ was one of the articles abandoned around the above-ground landscaping or if it had been dug up, and the humans built the bunker around it. Again, I dunno. And while the assumed location of the story appears to be midwestern United States, there are touches of Europe in certain vehicles and such. I dunno where the hell is taking place, but I do know nobody has anything but a midwestern American accent. *shrugging* I am hoping it gets a bit more focused as the episodes progress. As it is, it’s being a little slow and unnecessarily unfocused in the early episodes.

Right now I can say I am giving it a chance to pick up and grab my full interest. But it better hurry. I am not really in awe of the scenery and need a more meaty story to grab onto. Withholding Star rating just yet.

Space: Interstellar Comet Borisov is no longer in one piece: But this doesn’t mean the object is breaking apart in a meaningful way.

PM: Scientists Witness the Death of a Solar System, and the Birth of Necroplanetology: 570 light years away, a white dwarf devours its planetary children and creates a whole new field of science in its wake.

PM: The Sun: The Life-Giving Magnet in the Sky: We owe our life…and much more…to our favorite star in the sky.

PM: Uranus, No Joke, Is Leaking Gas … LOL!!! Article title of the day.

Anyone like to see more weekend ‘diversionary’ topics here to relieve the impact of ugly stuff?