The Jeffrey Epstein case keeps getting more and more bizarre. If you have been following along you will recall that back in early July, when Epstein had first been arrested for the second time, it was reported that his plane might have shared a tail number with the U.S. State Department and DynCorp, Inc. Via Blacklisted News:

“Voat user Freed0mFighter uncovered a special report on Occurrences: Foreign and Domestic (archived)(original PDF)identifying the fact that one of Jeffrey Epstein’s suspected trafficking aircraft shared the same tail number as a State department Bronco used under contract by DynCorp. The use of the tail number can be corroborated by official government records.[9]This would mean that Jeffrey Epstein trafficked underage girls using aircraft of the same tail number and during the same time period as DynCorp when they trafficked minors in Bosnia and other parts of the Balkan states. If issued by some sort of accident or if one of the two planes was decommissioned, the statistical odds of just two planes sharing the same number would still be over 1 in over 900,000.[10] Special thanks to User:PeterVenkman, and see also section on Connection to identified criminal activities in Bosnia.”  – Blacklisted News

Photos and information about the aircraft can be seen below: 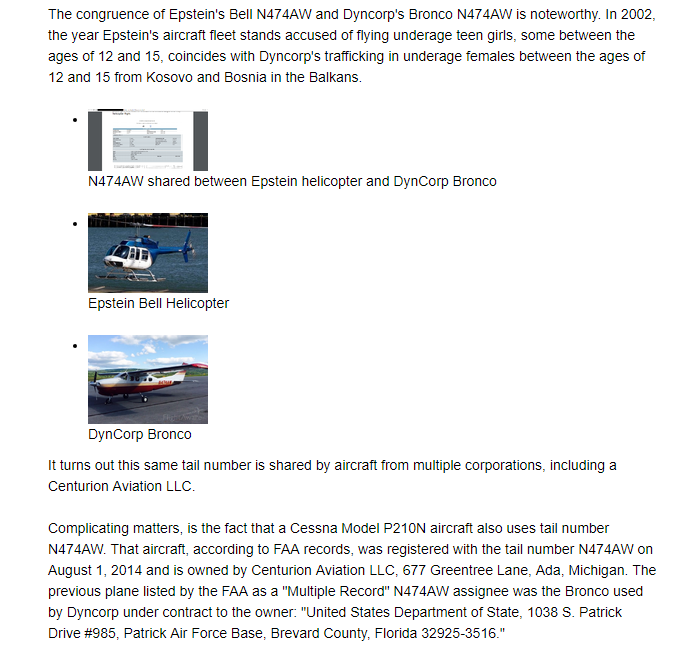 But this isn’t a coincidence pic.twitter.com/66r3zhItiI

This is the exact moment in time that epstein's jet apparently flew to antarctica. It flew there right in the middle of a flight, and within one minute was back in the northern US

NOT AN ERROR? Epstein has a teleporting plane?

JIM STONE speculates whether Epstein's plane that was identified by flight tracker was modified to make the trip to Antarctica https://t.co/PYj1J76tGB

Via Jim Stone at The Rumor Mill:

“He started out with a 727 that became known as the Lolita Express. It is larger than the Gulf Stream that made this particular flight to Antarctica, but it did not have even half the range of the Gulf Stream, and Epstein sold the 727 a few months ago, before going to jail the second time. He held onto the Gulf Stream, which is a smaller plane (still not small, but smaller than a 727) and the reason why he kept the gulf stream was because it could still at least sleep 22 peaopl (I mean SLEEP, beyond first class) plus it’s range was enormous, capable of going from the U.S. to Antarctica south of Africa in one shot, with no stopovers. Not many planes can do that, and this flight was at the fringe of what even that long range Gulf Stream could do.

This flight track has ended my skepticism of an elite antarctic base. If Epstein’s jet went there, we now have proof that base exists and is an elite base, as described. Donald Trump’s jet could not have made such a trip without stopping over somewhere, this is a remarkable flight that not only proves there’s something down there, whatever is down there is fully fueled and able to accommodate a major international jet. I am surprised.” – The Rumor Mill

This doesn’t even begin to touch on the many irregularities with Jeffrey Epstein’s case, both cases for that matter: 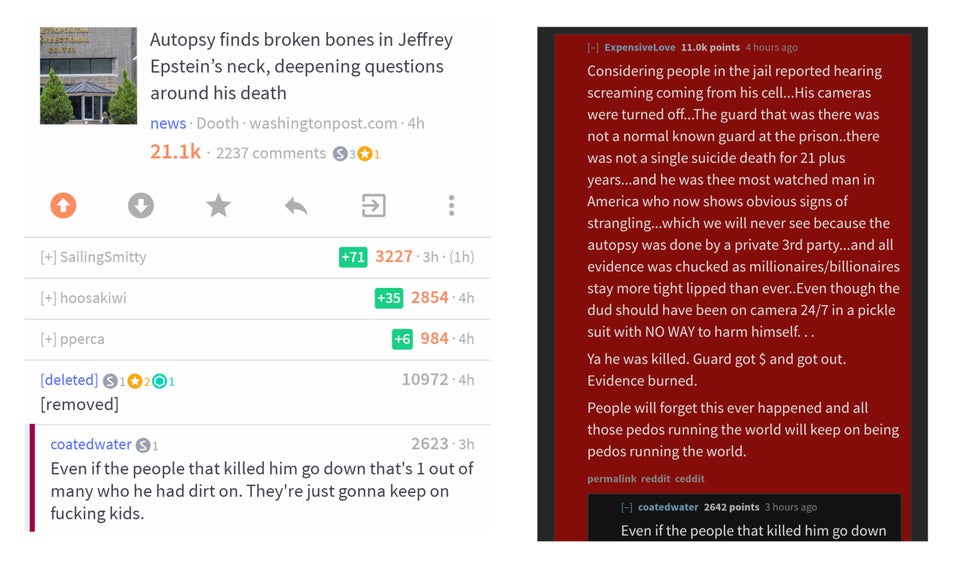 SOME HIGHLIGHTS FROM THE RECENTLY UNSEALED COURT DOCUMENTS:

Link to the file for all the citations provided: https://gofile.io/?c=GqjNcB – Combined PDF Document.

– more women then just Maxwell who got girls for Epstein is claimed.

– Maxwell and Epstein converted Giuffre into a sex slave

– Giuffre was trafficked to “powerful individuals” including internationally by Maxwell and Epstein.

– Forced to have sex with prince Andrew in Maxwell’s apartment. Maxwell acted as a ‘madam’ for Epstein.

– Giuffre was forced to watch other underaged girls have sex with Epstein, Maxwell and others.

– Numerous witness corroborate the statements Giuffre made in her joinder motion

– After 4 years as a sex slave Giuffre escaped to foreign country and hid for years.

– However, it appears she was with him for two years between 2000-2002 after new evidence emerged.

– Giuffre suggested the government was part of the conspiracy when it secretly negotiated a NPA with Epstein and his co-conspirators. Alleges they did it because it would shin light on powerful individuals.

– Denies she has suggested this and mentions the CVRA Action relates to whether they failed in their responsibilities.

– Other jane doe cannot corroborate Giuffre but both appear to claim to not know each other and the patterns of abuse are similar in many regards.

– Giuffre has written a book on the events but not published it.

– She worked at the Club at Mar-a-lago sometime in fall 2000 including many other places that year.

– At Mar-a-lago she worked as a “seasonal” spa attendant after turning 17.

– Giuffre disputes this claiming actual dates not listed by mar-a-lago and some records seem to indicate she worked there during the summer.

– Her father took her to Epstein’s house at least once, Epstein introduced himself.

– However, Giuffre denies this pointing out that working as a masseur would have been illegal for her to do as a minor with no high school diploma. She claims Maxwell approached her while she was spa attendant. Her father did drive her and Maxwell took her and then taught her how to give massages.

– Epstein and Maxwell turned that into a sexual encounter and offered money and better life in return for sexual demands.

– She served people for sex not as a masseur.

– Another girl Sjoberg was also recruited.

– While one if Epstein’s regular pilots kept logs, Dave Rodgers, Epstein’s had another pilot who did not keep such logs and also traveled by commercial occasionally.

– Maxwell admits the flights logs are incomplete and had multiple pilots with multiple aircraft and only Rodgers kept logs.

– Giuffre claims she received $10,000 after being forced to have sex with prince Andrew in London at Maxwell’s home and bought a car with the money.

– Giuffre traveled to Thailand in September 2002 to received formal training in masseuse.

– Giuffre claim she was also sent to Thailand to recruit another underaged girl.

– At this point rather then returning she escaped to Australia with her new husband and hid.

– Another co-conspirator named Kellen scheduled the appointments with underaged girls.

– After Giuffre escaped her ex boyfriend says he was recruited by Maxwell to procure underaged girls.

– Nothing to important it appears

– Sharon Churcher seems to admit Giuffre had no evidence or proof Alan Dershowitz was a pedo but seems to be asking if they ever hung out.

– Giuffre claims that in Churcher’s article the statement “Donald Trump is a good friend of Jeffrey’s. He didn’t partake in any sex with any of us, but he flirted with me. He’d laugh and tell Jeffrey, ‘you’ve for the life‘” is incorrect.

– Giuffre clarifies what is and isn’t true in the statement. Donald Trump was a friend of Epstein but did not have sex with any of the girls or flirt with Giuffre. He also never told Trump “you got the life”

– Guiffre Clarifies she never say Donald have sex with any of the ‘girls’ in her presence but had met him a few times.

– Donald Trump was never in her presence with her with any of the ‘other girls’.

– Her Dad seems to have known Donald trump and talked when they say each other and was there at least once when they met.

– Giuffre had never been in Donald Trump presence while at the same time being in the presence of Epstein.

– Jeffrey was the one who told Giuffre they were good friends, but she never observed them together.

– She never saw him at Epstein’s island, New Mexico, or New York that she can remember.

– Giuffre worked for Epstein for about 2-1/2 years.

– Admits she would do whatever the pedophiles wanted for her.

– FBI told her Epstein is filming her even when she is in the washroom.

– FBI told her it was all illegal because she was underaged.

– The was told to her after the article was printed by Sharon.

– Epstein invited two young brunettes to a dinner which he gave on his Caribbean island for Mr. Clinton shortly after he left office (says is true).

– Al-Gore and his wife Tipper were also guests of Epstein on his island.

– Ghislaine took nude phots of her lying naked in a hammock, legs open, that they gave Jeffrey for his birthday.

– Epstein would send her to locations to sleep with people at either the island or New Mexico.

– The encounter with prince Andrew was in the bathroom and he was licking her toes.

– attempts to attack credibility of witness (my opinion) but witness says her self- written manuscript is 99.9% correct about details related to Maxwell.