Did Robert Mueller and John Brennan play a role in the attacks that took place on September 11, 2001 that forever changed America? Both men have been at the center of government scandal cover-ups for decades. And it must be said, the career paths that both men took suggest a relationship between events and subsequent promotions and protections.

According to Freedom Outpost, Brennan was the CIA station chief in Jeddah, Saudi Arabia when the 9/11 hijackers were given visas to travel to the United States. There have been reports that he gave the final approval for those visas.

Robert Mueller was conveniently chosen to head the FBI one week before the September 11 attacks.

The Boston Herald’s Howie Carr had much to say about Robert Mueller’s past as FBI Director:

“After 35 years in the can, two of the four innocent men are dead, the other two have finally been freed. The four men or their estates are suing the feds for wrongful imprisonment. It is not a frivolous lawsuit – they will eventually win a judgment of $102 million.

The plaintiffs – the victims – are trying to get the necessary information from the crooked FBI now run by Mueller about how they were framed. But Mueller absolutely stonewalls the release of the information.

Here’s a show-cause order I discovered last year from U.S. District Judge Nancy Gertner, who presided over the civil case. The FBI was refusing to turn over the exonerating evidence to either the plaintiffs or the Justice Department, which was defending the FBI after its frame up.

Of course, that wasn’t the first time Mueller’s FBI tried to broom the scandal of the four framed men. In 2002, Mueller directed the G-men to oppose state pardons for the four men because the FBI’s own evidence that exonerated them was merely “fodder for cross-examination.”

Despite the FBI’s knowledge that the men, including Peter Limone, were innocent, Mueller’s FBI claimed to a state board that the incontrovertible exculpatory evidence “does not necessarily mean, however, that Limone or any of the other defendants is innocent – it merely means that they are entitled to a new trial.”

By the way, one of the innocent men, Louie Greco, was in Florida the night of the murder he was falsely convicted of. One of the crooked Boston FBI agents (who died in prison in Oklahoma while facing murder charges in another gangland hit) later bragged to a local gangster about their brilliant railroad:

“How does Louie Greco like going from Miami to death row? He wasn’t even there.”

This is your FBI, the organization that Bob Mueller was – and still is – trying to protect from being exposed as irredeemably corrupt.” – Howie Carr, The Boston Herald

So it would appear that Robert Mueller did not have the best reputation while he was working at the FBI. There was a series of events that led to his appointment, as there had been in the case of John Brennan.

According to a recent article by the New York Post’s Paul Sperry:

“In October of 2001, Mueller shut down the government’s investigation after only three weeks, and then took part in the Bush [administration’s] campaign to block, obfuscate and generally stop anything about Saudi Arabia from being released,” added Premoli, now a plaintiff in the 9/11 lawsuit against Saudi Arabia.

In fact, Mueller threw up roadblocks in the path of his own investigators working the 9/11 case, while making it easier for Saudi suspects to escape questioning, multiple case agents told me. Then he deep-sixed what evidence his agents did manage to uncover, according to the 9/11 lawsuit against the Saudis.

Time and again, agents were called off from pursuing leads back to the kingdom’s embassy in Washington, as well as its consulate in Los Angeles, where former FBI Agent Stephen Moore headed a 9/11 task force looking into local contacts made by two of the 15 Saudi hijackers, Moore testified in an affidavit for the 9/11 lawsuit. He concluded that “diplomatic and intelligence personnel of Saudi Arabia knowingly provided material support to the two hijackers and facilitated the 9/11 plot.” Yet he and his team were not allowed to interview them, according to the suit.” – Paul Sperry, New York Post 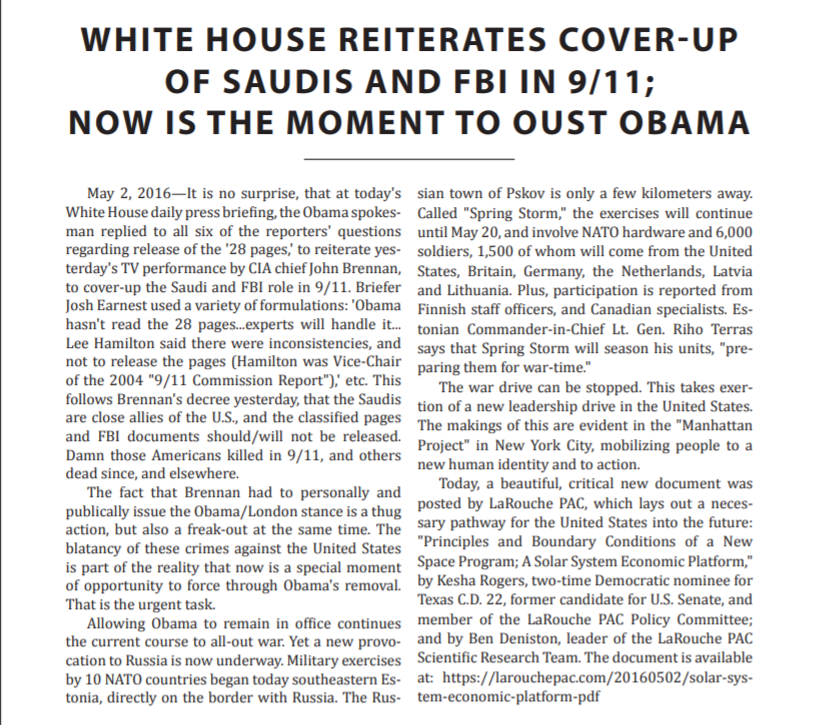