With questions surrounding Jeffrey Epstein’s death, he may have succeeded where others have failed in uniting both sides of the political divide. Although the people at whom both sides point fingers may differ, there is an overarching theme that they have in common: Mr. Epstein’s “suicide” does not pass the sniff test.

As you may remember, our own Radix Verum penned an article on July 25th reporting on Jeffrey Epstein’s first alleged suicide attempt on 7/23/19. Whether it was an assault or suicide attempt, the details still remain unclear to this day. What we do know is that he was found in his cell sprawled out on the floor,  unconscious. He was reportedly treated for neck injuries that required medical attention but no explanation was ever provided as to just how he sustained those injuries? Was it from an attempted hanging that failed? If so, by what method did he try to hang himself? A sheet? A gym sock? Or was he assaulted by someone else, and if so, by whom?

Patriots Soapbox’s Marna Stoove reported that Judge Richard Berman, who is presiding over the Epstein criminal case, is questioning the matter as well. Read her report here for further details!

Questions lingered unanswered in the air. But when authorities behaved as though it was a suicide attempt and placed him on 24/7 monitoring after the event, the news media put the story on the back burner. That is, until 18 days later when on August 10, news broke that Epstein was dead. As questions were raised we learned he was taken off suicide watch on July 29, 2019 (a mere six days after his alleged attempted suicide) and placed in a special housing unit.

Fox news ran an article by Judith Miller from City Journal where she stated officials told her on August 11, 2019 that “…the prison’s psychological team had evaluated Epstein on a daily basis after his alleged initial suicide attempt and had found him to be no risk to himself or others.”

In the Special Housing Unit we know that Mr. Epstein was supposed to be under close observation. Guards were required to monitor him every thirty minutes and he was supposed to have a cellmate that is theorized to help prevent another attempted suicide, or at the very least alert the guards if he had tried. Oddly, at the time of his death, neither occurred. His cellmate was transferred out just hours before, leaving Mr. Epstein alone in his cell. The two guards on duty who were supposed to monitor him, both happened to fall asleep for three hours in the middle of the night. Mr. Epstein who was alone in his cell seemed to have some kind of foresight to know that his window of opportunity to commit suicide had come! That the guards were sleeping and would not be checking on him. In another strange coincidence the security cameras stopped recording at the same time. It would seem the stars had aligned for Mr. Epstein once again to add another diabolical chapter to his charmed life.

As news broke of his death, political figures and Blue Check pundits swore to get to the bottom of this sordid tale. They demanded answers, as did many of us, on just how the most high profile prisoner in the system managed to kill himself in a facility where no one else had succeeded since 2006. As information found its way into the public about Epstein’s physical condition at the time of his death, with a fractured hyoid and possibly several fractured cervical bones as reported by the New York Post, forensic experts were plastered across newsrooms discussing the unlikelihood of suicide by hanging. The media coverage was breathless, positing theories, asking hard questions, seeking the truth, regardless of their motives. It was almost like they remembered what journalism was about, but alas this momentary return to actual news reporting would be fleeting.

On August 16, 2019 Barbara Sampson, the New York City Chief Medical Examiner rendered her findings that Jeffrey Epstein’s cause of death was suicide by hanging. According to Fox News in the video below, the report stated that he had hanged himself with a bed sheet tied to the bunk and knelt toward the floor. She did not offer any explanation or detail about how she came to her conclusion. Nor did she explain how a man who was 5’11” could hang himself from a bunk bed that was roughly five and a half feet tall and sustain those types of injuries.  Surely the big media players would question these findings, right?

If you search Jeffrey Epstein’s death now on the internet, you will see page after page of articles declaring that Jeffrey Epstein died of suicide by hanging as the media narrative shifts. No longer is the concept of suicide questionable; it is now undisputed fact to most media outlets. The public, however, is not necessarily satisfied with these answers, and here is why. 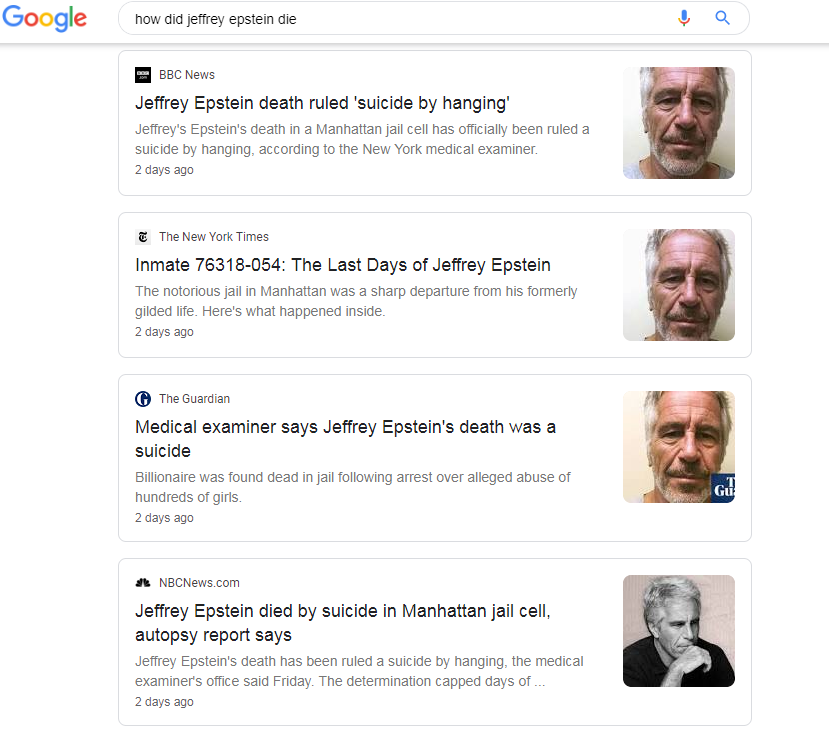 Forensic experts gave us compelling reasoning as to why “lean in” suicide by hanging was highly unlikely given that his injuries were more in line with strangulation than suicide. Dr. Cyril Wecht, a forensic pathologist with over 20,000 autopsies under his belt, sat down with Fox’s Judge Jeanine Pirro to give a very comprehensive account as to why Epstein’s injuries did not really align with the “facts” as reported thus far. He also pointed out that with five governmental investigations going on that are looking into the suicide, including by the DOJ and FBI, the Medical Examiner’s final conclusion appeared to be rushed. It should have remained pending until the conclusions of all investigations.

Of course this is one expert opinion over another and should be taken at face value. However, there is another curious twist when it comes to the New York City Medical Examiners office’s reliability. In July, 2014 the New York Post ran a story describing the  disturbing and less than stellar track record of the ME’s office. The litany of issues is long:  Embezzlement, removal of organs without permission, losing bodies (with one instance requiring digging up three hundred graves in the Bronx only to fail to find the missing corpse), shipping bodies to medical schools instead of funeral homes, and placing a body from an accident scene in a truck with garbage.  It is hard to swallow that this is the authority that is supposed to allay the concerns under a cloud of uncertainty as to what really happened to Jeffrey Epstein. Below is just a snapshot from the New York Post article: 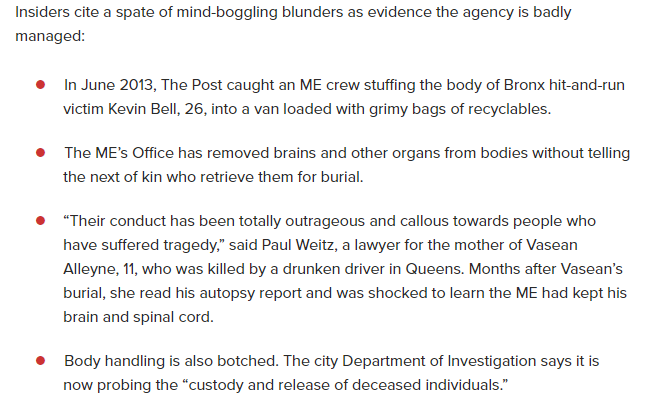 It is no wonder Epstein’s attorneys doubt the validity of the official cause of death, and may be the only ones we can count on at this juncture to determine what really happened. On Friday, his attorneys Martin Weinberg, Reid Weingarten and Michael Miller gave the following statement to the AP News:

“First, no one should die in jail. And no one, not Mr. Epstein who was presumed innocent and had violated no prison disciplinary rule, and not anyone should be imprisoned under the harsh, even medieval conditions at the MCC where Mr. Epstein spent his final hours. His safety was the responsibility of the MCC,” the statement read. “It is indisputable that the authorities violated their own protocols.”

“if necessary legal action (will be taken) to view the pivotal videos — if they exist as they should — of the area proximate to Mr. Epstein’s cell during the time period leading to his death.”

“We are not satisfied with the conclusions of the medical examiner. We will have a more complete response in the coming days.”

If they are suspicious, shouldn’t everyone else be too? They had staff spending twelve hours a day with Epstein while he was imprisoned that had seen him just 12 hours before his body was found and they had no reason to believe he was suicidal. Or did they?

There is yet another twist in this strange tale. Two days before his death Mr. Epstein signed his will which has been filed in the US Virgin Islands and this may be his final way of  hurting his victims one last time. First, his last will and testament was filed in the US Virgin Islands which adds complications for claims against his estate. Second, he may have also put all of his assets into a trust, separating himself from his finances, which would make recovery from any civil judgments against him or his estate even more difficult for his victims. See the video below for a further explanation:

What really happened to Jeffrey Epstein in his final hours remains an unanswered question for many. One thing however is certain. He can no longer inflict any harm or victimize anyone else, most especially children. That is about the only relief to come from this whole sordid affair.