July 6, 2020 – It has become clear that members of the so-called elite class, whether in Hollywood, Silicon Valley, the media or the highest echelons of power, is a small circle of people who know one another. The latest example of this was the casual mentioning of partying with Ghislaine Maxwell by Ellen Pao, former Reddit CEO and partner at Kleiner Perkins, a Venture Capital firm. 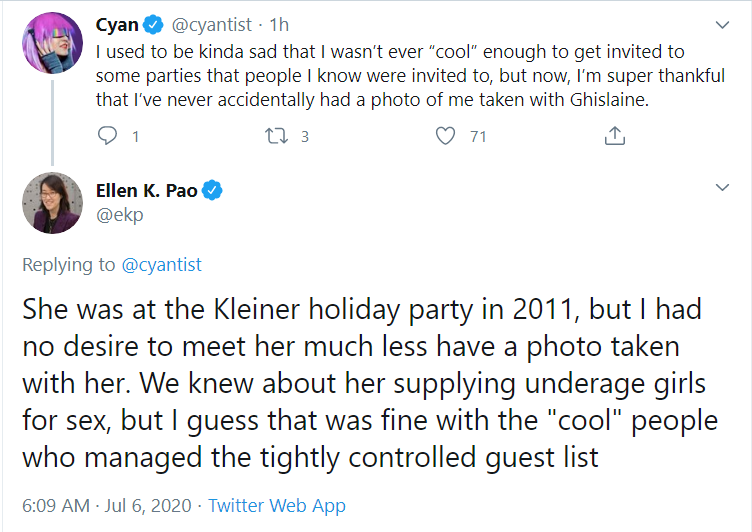 She and “Cyan” were referring to recent photo of Elon Musk with Ghislaine Maxwell, and his excuse that it was somehow accidental or a setup. Pao makes the stunning admission “we knew about her SUPPLYING UNDERAGE GIRLS FOR SEX” and says the “cool” people who managed the guest list admitted her. She quickly followed her tweet up with this one after being bombarded with comments demanding answers, asking, “so you knew in 2011 and said nothing?” 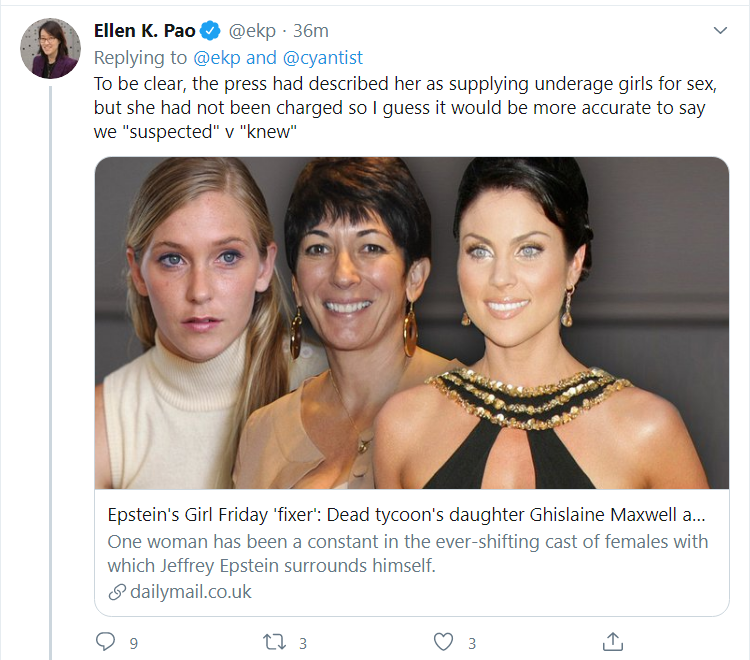 This was, in my opinion, a liability cover after getting pushback. She then locked her account. She may be going through and deleting tweets, so I am providing the archive of these here.

According to former Reddit Ellen Pao, “we knew” underage girls were sex trafficked by Ghislaine Maxwell in 2011

– No spouses were allowed. pic.twitter.com/qtAm46m7bE

I find the “no spouses allowed” part very indicative of the kind of “party” this was.

Pao then said her opinion made no difference, after claiming she was not part of “inner circle,” to use her phrase.

Well that was pretty weird and happened quickly pic.twitter.com/MeGuQoJkWC

Indeed it did happen fast. She may be worried that she will now face backlash from the big tech elites who control a vast portion of the internet and services we use.

Ellen Pao Says Tech Firm Invited Ghislaine Maxwell To A Party After Reports She Had Supplied ‘Girls For Sex’ https://t.co/QkgIlkCfDj

Of course many of the elites partied with Epstein after his initial arrest and charges in 2008. Pau’s comments that “we knew” reminded me of Cindy McCain’s offhand comment after the arrest of Jeffrey Epstein last summer … “we all knew.”

Cindy has not been pressed by the mainstream media to explain in more detail what she meant by “we all knew what Epstein was doing.” 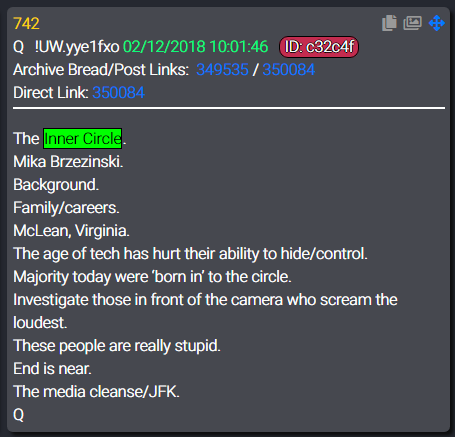 This also reminded me of QAnon, and their mention of the “inner circle.”

This is also not the first time there has been controversy surrounding Reddit. 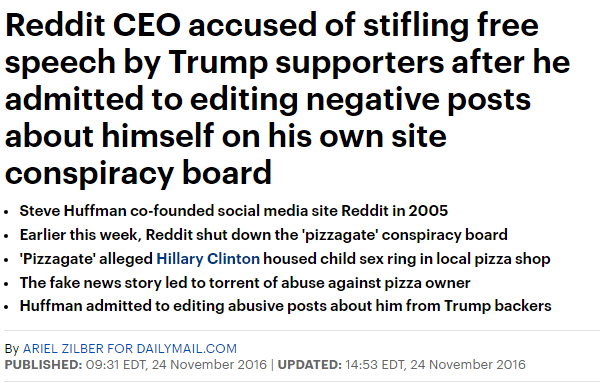 Steve Huffman has admitted to editing comments related to Pizzagate, and a child sex trafficking ring. In light of Pao’s admission, this is stunning. He banned our CBTS QAnon page, almost immediately, then purged the Great Awakening subreddit, and then The Donald, the biggest Pro-Trump subreddit, making it clear: conservatism is not allowed.

Why is the media ignoring the #RedditHatesWomen hashtag & buying this fake virtue signaling they did by banning r/The_donald, which had all but been abandoned already? Somebody needs to ask Steve Huffman to his pimpled face if he’s proud of r/SlaveAuctions and r/RapeConfessions

Huffman has been accused of hatred of women and has promoted cannibalism. There are also questions about the treatment of Aaron Swartz.

Aaron was an advocate for open source information, and was strongly against censorship. He certainly would not have agreed with Huffman’s decisions. 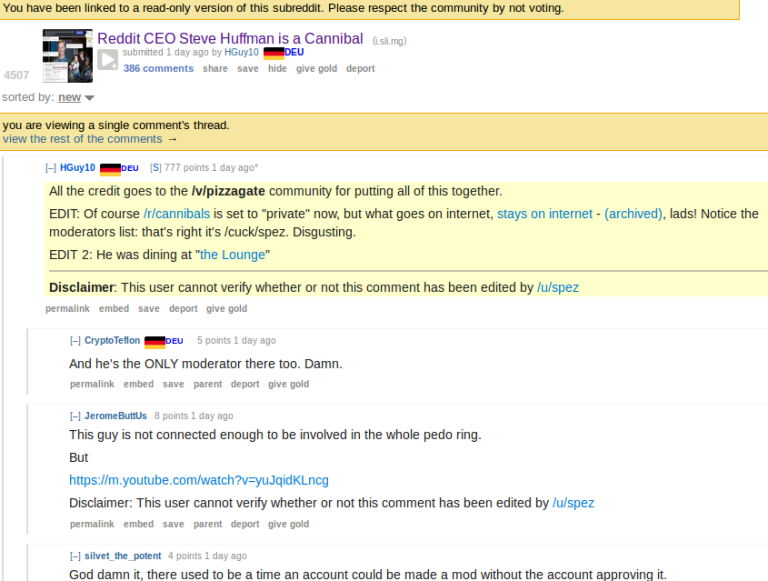 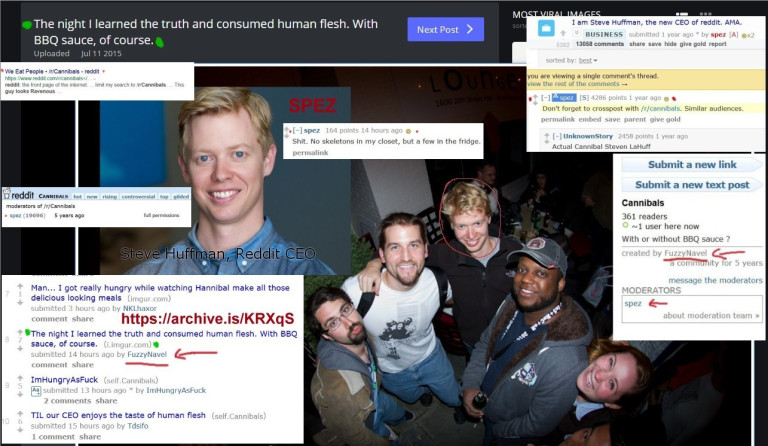 These graphics disclose bizarre behavior from Steve Huffman. Why is he talking about consuming human flesh? Is he joking? Is he serious? What about his hatred of women?

According to Vulture of Critique:

Reddit Bans Subreddit Investigating Podesta Emails Link to Pedophilia, But Keeps Pro-Pedo Subreddit /r/pedofriends…while Reddit banned /r/pizzagate for witch hunting, it seems to have no problem being a nexus for pedophiles to meet up, chat and get together for ‘R4Rs’ — online solicitations to do things for one another, often of a sexual nature.

Redditors quickly identified /r/pedofriends and /r/pedochat (a private, password-protected chat forum) as examples of Reddit covering for pedophiles if not outright enabling them.

No word has come forth from Reddit admins about whether they will continue to tolerate pedophilia. They seem more concerned that a subreddit might identify pedophiles within the US government than that pedophiles use Reddit as a private forum, and at this point, that is all we know.

Reddit CEO Steve Huffman today admitted that he had edited Reddit user comments that criticized and insulted him, wielding his power to anonymously change references to his own username, and replace them with moderators of the pro-Donald Trump subreddit, r/the_donald.

Huffman — who posts on the site as ‘spez’ — admitted to the transgression after being called out by users of r/the_donald, saying he was inspired to edit the comments after a spate of insults emanating from the pro-Trump subreddit. ‘I messed with the ‘fuck u/spez’ comments, replacing ‘spez’ with r/the_donald mods for about an hour,’ Huffman said, indicating that the only thing he secretly altered was the target of the insults.

I find it shocking that there are pedophile groups, rape groups and cannibalism groups that are allowed to thrive on Reddit, and yet one of the co-founders of Reddit, Steve Huffman, finds it imperative to harass Trump supporters.

Perhaps Reddit should make a statement about Epstein and child sex trafficking. Maybe Silicon Valley in general should explain their connections to Epstein, and other predators like him. How many other Epsteins are out there, operating with impunity under the public radar? Where are all the children that the victims have reported seeing? There should be thousands of them, as victims have claimed. When will the politicians and celebrities who traveled and partied with Epstein and Maxwell be called in for questioning?

For more information about what happened to Aaron Swartz, please see the following articles:

People have also been questioning what’s really going on with the arrest of Ghislaine Maxwell, please see these two threads:

My theory is Maxwell was taken with Epstein last year. They have been running a sting on all the pedophiles for a while now. pic.twitter.com/dQiYznAv26

This one makes a compelling argument that she has been cooperating with federal authorities.

and she’s gonna show them the money pic.twitter.com/HrovdHwnBC