“Two-thirds of deaths are people with six or more comorbidities.”

They that can give up essential liberty to purchase a little temporary safety, deserve neither liberty nor safety.” —Benjamin Franklin (1759)

Rhetorical question: Do you think the majority of Americans are going to be, shall I say politely, “agitated” when they finally awaken to the reality that Joe Biden’s unconstitutional and draconian vaxxing mandates have been primarily a leftist political charade to indoctrinate and condition citizens that they must submit to the Democrats’ power and control agenda?

Of course, you are likely already fully aware of this administration’s agenda and political machinations to contain the ChiCom Virus pandemic threat. But many of the Left’s legions of “sheeple,” whose lives and children’s lives continue to be unnecessarily turned upside down by mandates and school closures, are now starting to figure it out.

For the record, Democrats are artful masters of the BIG Lie, and there has been no bigger and more consequential political lie in our nation’s history than the collaborative promotion of fear and angst being perpetuated by the Democrat Party and its Leftmedia propagandists.

Unfortunately, much of the government mandate damage has already been done.

Some of the best and brightest young military Patriots devoted to Liberty, those who have abided by their oaths “to support and defend” our Constitution, have already been purged after refusing to submit to Biden’s mandate. The same is true among the other ranks of federal employees. Indeed, that has been the administration’s mandate objective — to remove loyal and faithful Patriots whom Biden and his delusional leftists label “extremists.”

In the last week, there have been admissions by the most powerful of Biden’s COVID pandemic commissars — admissions that have cast a bright light on the adulteration of official pandemic counts, and on the Demos’ underlying agenda.

It started with the nation’s highest-paid bureaucrat, the Beltway troll Anthony Fauci, who for the first time has declared a newfound concern for the economic impact of his quarantine mandates: “There is the danger that there will be so many people who are being isolated … that you could have a major negative impact on our ability to keep society running.” Where was that fundamental concern 22 months ago?

Then, responding to the administration’s awakening that parents are fed up with their kids being locked out of schools, Fauci made a shocking admission regarding hospital counts for children — who we already know are at virtually no risk for hospitalization, much less death — in order to unwind teacher union objections. In an amazing statement, Fauci declared: “If you look at the children who are hospitalized, many of them are hospitalized with COVID as opposed to because of COVID. If a child goes in the hospital, they automatically get tested for COVID. And they get counted as a COVID-hospitalized individual when, in fact, they may go in for a broken leg or appendicitis or something like that. So it’s overcounting the number of children who are, quote, ‘hospitalized with COVID,’ as opposed to because of COVID.”

This confession was shocking because, notably, all adults are also tested upon hospital admission, and likewise, as we have suggested repeatedly, the number of adult admissions because of COVID versus with COVID, as well as the number of deaths, has been inaccurate. The question, then, is this: What are the actual numbers of hospitalizations and deaths of all ages with COVID versus because of COVID? In fact, in New York this week, health officials announced almost 50% of their “COVID hospitalizations” are not because of COVID. 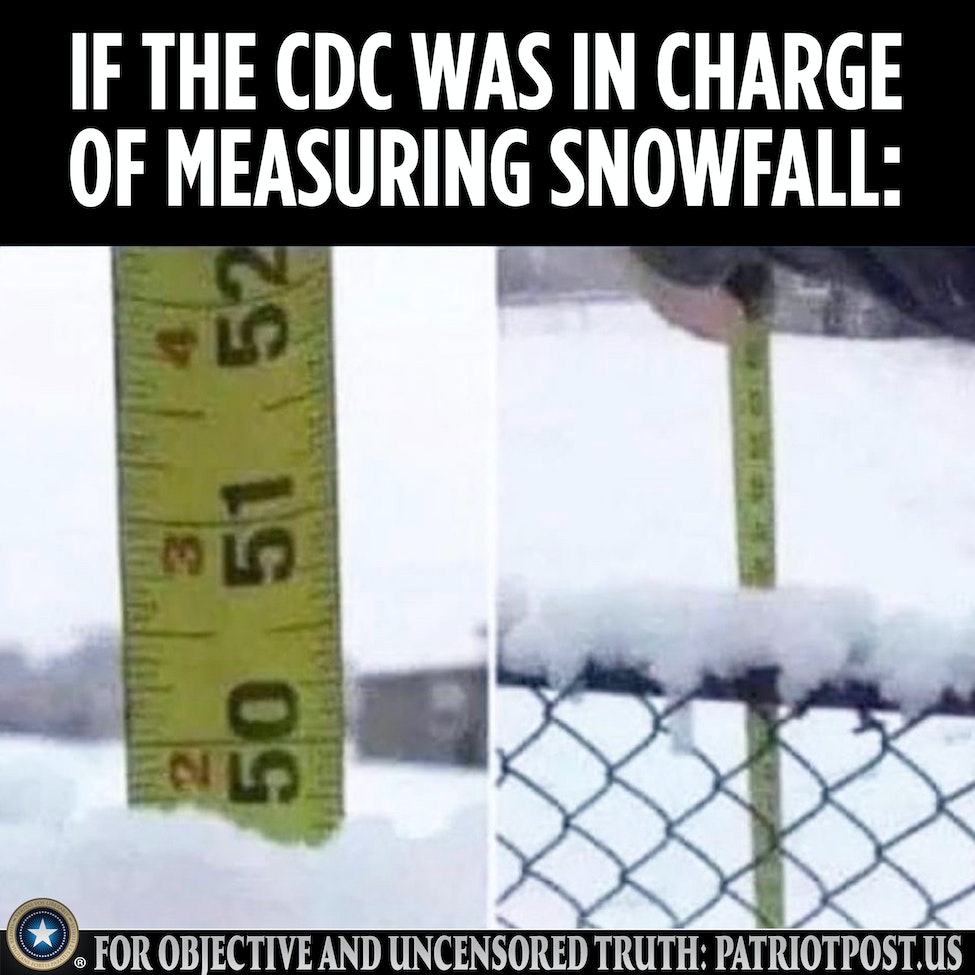 The truth about those numbers has a direct bearing on all the masking and vaxxing mandates, emerging proposals for vaccination passports, and, most important, the reported efficacy of vaccines based on hospitalization and death data that we now know is highly suspect. Arguably, vaccines benefit those with significant comorbidity factors, but how about those who have no such factors?

It is abundantly clear, despite Demo state governors and mayors issuing child vaccination mandates, that 99.999% are NOT at risk of serious illness or death because of COVID.

The fake hospitalization numbers being reported by the Leftmedia even made their way into SCOTUS deliberations regarding Biden’s disastrous vaxxing mandates.

That false claim was so far off the mark that CDC Director Dr. Rochelle Walensky had to publicly correct Sotomayor, and it even prompted The Washington Post “fact-checker” to give her its worst rating, four Pinocchios. In fact, there are fewer than 3,500 children in hospitals with COVID.

That is what happens when a Supreme Court justice and her brainwashed young clerks get their information from CNN and MSNBC. So, the future of individual Liberty in regard to the SCOTUS decision on Biden’s mandates is resting on the uninformed opinions of Sonia Sotomayor? It appears so.

A key question we have asked repeatedly over the last 18 months about the CDC’s hospitalization and death counts of those with COVID versus dying because of COVID was queried this week by Fox News host Bret Baier, who asked Walensky, “How many of the 836,000 deaths in the U.S. linked to COVID are from COVID or how many are with COVID?”

Not denying this was an important distinction related to comorbidity factors, Walensky dodged the question, saying, “Those data will be forthcoming.”

Right. I can tell you I have searched deep within the CDC website for the last year, and that comorbidity death distinction data is nowhere to be found. There are lists of comorbidity factors, but no cumulative data on how, or how many of, those factors are attributable to deaths.

Of course, Walensky refused to give a straight answer for the same reason that data is not plain on the CDC website — if she answered the question accurately, raising legitimate questions about comorbidities, that would call into question the Demos’ underlying government power-play agenda.

Maybe the CDC will provide an answer after Fauci is finished evaluating his latest transgender monkey study.

Confirming some other key data points, Walensky admitted what everyone already knows: “Our vaccines are working exceptionally well … but what they can’t do anymore is prevent transmission.”

However, then the CDC director inadvertently elevated the question about comorbidities again by noting data indicating those factors in the deaths of people who have been vaccinated.

According to Walensky: “The overwhelming number of deaths, over 75%, occurred in people who had at least four comorbidities. So really these are people who were unwell to begin with.”

In other words, 75% those who died with as opposed to because of COVID had “at least four comorbidities.”

So when will she get back to us with an answer to the question about comorbidities as a factor of those unvaccinated death counts? Again, it is clear that vaccines benefit those with significant comorbidity factors, but release the data so the uninformed, like Sotomayor, can make better informed decisions.

To that end, former Trump administration COVID adviser Dr. Scott Atlas noted that, actually, “Two-thirds of deaths are people with six or more comorbidities.” And as an example of CDC misinformation, he added: “Yet the message was out there that anybody with hypertension, high blood pressure was at high risk for COVID. That was false. … This was an intentional inculcation of fear in the American public. This should never happen again. … The truth will prevail. And hopefully we’re starting to see that now with these admissions about hospitalizations and deaths being mis-categorized.”

One reason the CDC does not make this data readily accessible is because it does not want people to decide they are not high risk, and therefore choose not to get vaccinated. In other words, paternalistic bureaucrats think you are such an idiotic adolescent that you can’t be trusted with your own decisions regarding this vaccine.

Moreover, given the Demos’ politicization of the CDC, that data is concealed because it would call into question Biden’s power and control agenda, i.e., Fauci’s permanent pandemic — you know, the little man who was instrumental in the ChiCom development of COVID.

There is no question that the ChiCom Virus is a very bad bug, but there is also no question that Democrat politicos at the federal, state, and local levels have used the pandemic as fodder for their statist power agenda. That would include Biden’s so-called “voting rights” bill, a.k.a. the Demos’ bulk-mail ballot fraud. They hope to use the pandemic as reason to perpetuate mailing ballots to millions of unauthenticated voters, as California and seven other states now do.

The bottom line: Joe Biden clearly did not “shut down the virus” as advertised, though his administration has grossly overstated the numbers. As for Biden’s assertion back during the 2020 election when the CDC reported 220,000 deaths — “Anyone who is responsible for that many deaths should not remain President of the United States” — political analyst Rich Lowry asks, “When does Trump get his apology?”

As for his latest lie that he would provide “free testing,” Biden’s blame-shifting solution for failing to ramp up test production months ago — if that wasn’t a planned failure to keep the fear and chaos going strong — is to force insurers to pay for tests … if folks can find one.

One thing the Democrats have demonstrated — the Red Chinese need not invade the U.S. to severely cripple our strength as an adversary.

Join us in prayer for our nation’s Military Patriots standing in harm’s way, for our First Responders, and for their families. Please lift up your Patriot team and our mission to support and defend our Republic’s Founding Principle of Liberty, in order to ignite the fires of freedom in the hearts and minds of our countrymen. Thank you for supporting our nation’s premier online journal of Liberty.