There is something sinister going on as it relates to the mainstream reporting on the Jeffrey Epstein case. We are seeing a coordinated effort at presenting a pre-scripted narrative and a total lack of ‘mainstream’ investigative journalists doing deep dives into Epstein’s background and connections to various intelligence agencies. The mainstream press is in full blown cover-up mode of what may be the closest thing to the JFK scandal of our time. We are talking about a case that could have potentially implicated some of the worlds most powerful politicians, academics, diplomats and leaders of industry.

If you don’t think the global media is coordinated, and won’t descend on the journalists doing the real reporting on a massive scandal that is so well documented, please remember the story of Gary Webb.

“Gary Webb, the Pulitzer prize-winning reporter who broke the story of the CIAs involvement in the importation of cocaine into the U.S., died December 10, 2004, reportedly from self-inflicted gunshots to the head. It was a tragic end to a brilliant, and tragic, career.

In August 1996, the San Jose Mercury News published Webbs 20,000 word, three-part series entitled Dark Alliance. The articles detailed the nexus between a California coke kingpin, CIA officials and assets and the Nicaraguan Contra army, whose funding had been cut off by an act of Congress in the mid-80s.

Ironically, the CIA did little to publicly counter his allegations. Instead, the media did its dirty work for them, most notably the Los Angeles Times and the Washington Post. The mainstream media accused Webb of exaggerating his findings.”

As Gary himself explains, some of the so-called reporters at the Washington Post had worked for the Central Intelligence Agency themselves. He explains how changes to the media landscape had made it very difficult for a small local newspaper to be able to withstand the lawsuits and scrutiny that come from breaking such stories. The major mainstream publications will not deviate from the narrative the establishment wants presented to the country. They began to publish hit-pieces critiquing every little thing about the story and Gray personally, to try to discredit the reporting despite the overwhelming evidence, testimony and documentation.

We have been getting a deluge of information about the Jeffrey Epstein case, but little of actual substance. Some court documents, with pages missing, that clearly had already been sanitized; we got reporting from ‘anonymous sources’ at the prison; we get the national media trying to connection Epstein to Trump despite the evidence that shows Trump severed ties with Epstein long ago and assisted investigators the first time Epstein was arrested.

And on and on it goes to distract from the real story. To have people focus on partisan issues that really shouldn’t have anything to do with child predators, so they don’t look into all the people Epstein was friends with. The people he socialized with. The people who covered for him. The people who wrote puff pieces for him to try to rehabilitate his image after his first arrest.

Anything to keep you distracted while they try to destroy evidence and slow walk things until the pubic forgets about it and moves on. They use their assets in the alternative media to misdirect you from what Epstein was actually doing and who he was really working for. The Epstein case indeed will be a litmus test for those in the alternative and independent media.

The establishment uses assets in the alternative media to run snow jobs and limited hangouts. The purpose of this is to flood the internet with all kinds of information, some true, some false in an attempt to muddy the waters and make fact and fiction harder to discern. They will trot these people out and say ‘they are the hero’s reporting on the Epstein case.’ This is because they already know the public does not trust the mainstream media anymore and will look to alternative media to figure out what is going on with the case. 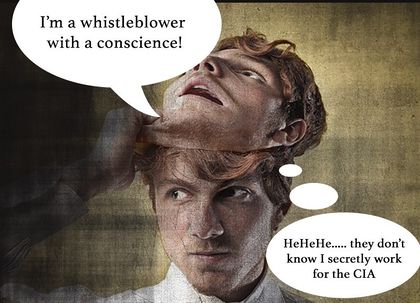 The establishment is currently doing this with Vicky Ward. She is a writer at the Daily Beast and she used to work for Vanity Fair. She had written a profile on Epstein that was essentially a puff piece. She now claims she had received stories from girls about Epstein she wanted to publish but her editor said no. So she blames the editor and tells a fantastical story about how she was so terrified of Epstein when she was delivering her child she wanted to have security to protect her.

From her article in the Daily Beast entitled ‘I Tried to Warn You About Sleazy Billionaire Jeffrey Epstein’:

“Why?” I asked Graydon. “He’s sensitive about the young women” was his answer. “And we still get to run most of the piece.”

Many years later I know that Graydon made the call that seemed right to him then—and though the episode still deeply rankles me I don’t blame him. He sits in different shoes from me; editors are faced with these sorts of decisions all the time, and disaster can strike if they don’t err on the side of caution.

It came down to my sources’ word against Epstein’s… and at the time Graydon believed Epstein. In my notebook I have him saying, “I believe him… I’m Canadian.”

Today, my editor at The Daily Beast emailed Graydon to ask why he had excised the women’s stories from my article. A Vanity Fair spokeswoman responded: “Epstein denied the charges at the time and since the claims were unsubstantiated and no criminal investigation had been initiated, we decided not to include them in what was a financial story.” – The Daily Beast

And yet there are numerous photographs of Vicky Ward as recently as 2015, with Ghislaine Maxwell at parties were the woman seem very friendly with one another. This seems a far cry from the statement she made in her story that:

“He has a way of spooking you, does Epstein. Or he did. My babies were born prematurely, dangerously so; he’d asked which hospital I was giving birth at—and I was so afraid that somehow, with all his connections to the academic and medical community, that he was coming for my little ones that I put security on them in the NICU.”

If Vicky was so terrified of Jeffrey Epstein, why would she associate with Epstein’s alleged madam? From Amazing Polly on YouTube:

And now we get to the obviously photo-shopped picture of Ghislaine Maxwell allegedly taken in LA at the In-N-Out Burger joint. The article and photos first appeared in a now deleted Mail Online story from August 16, 2019. That article has been archived here. 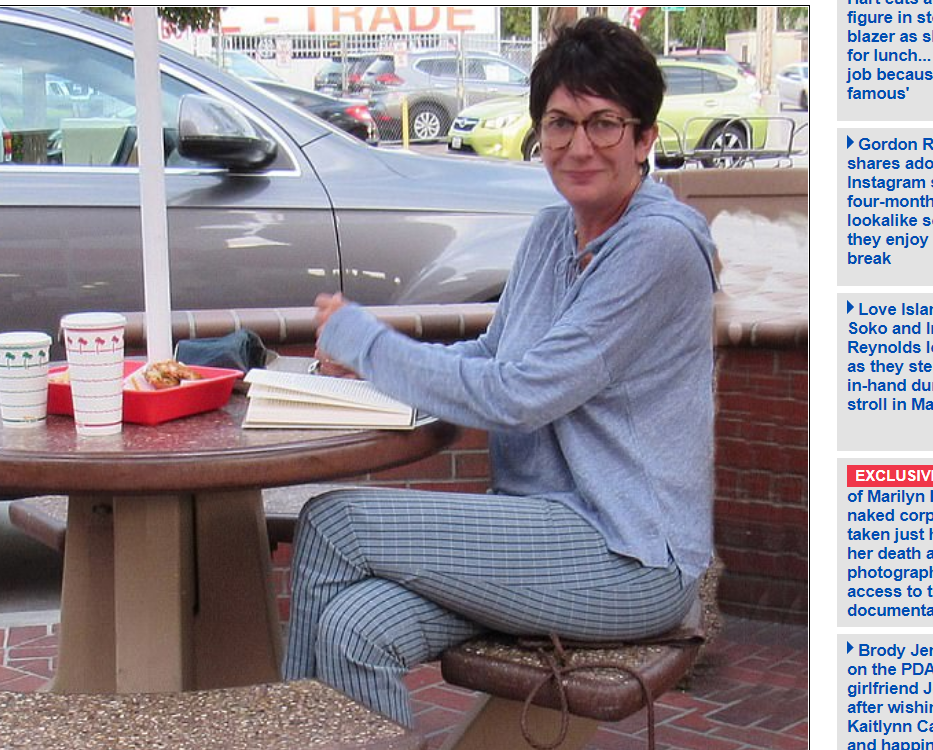 This came two (2) days after it was reported by the Boston Globe on August 14, 2019 that Ghislaine Maxwell was staying in an affluent Boston community with her Tech CEO boyfriend.

A researcher who is well-versed in photographic manipulation does a good run-down on how we can tell these 2 pictures of Ghislaine have been manipulated:

Epstein-The Only Way Out is In
1) The first sighting of Ghislaine Maxwell was at “In N Out” Burger in LA. The Cabal loves their symbolism. There were 4 different photo’s released by media, with some clear Cabal messaging in the photo’s. #Epstein #PedoGate pic.twitter.com/eBsxJb67Fg

2) The New York Post reported Ghislaine Maxwell was having a burger, fries and milkshake at a branch of In-N-Out Burger while reading “The Book of Honor: The Secret Lives and Deaths of CIA Operatives.” The newspaper said she was sitting with her pet dog. pic.twitter.com/DuNxFvDsDQ

4) The photo’s were definitely a set up photo shoot, with very odd messaging. The first thing I noticed, was Maxwell appears to be alone, there’s a second drink on the table. The MSM claimed an anonymous patron noticed her, and she gave permission for him to take the photo’s. pic.twitter.com/z9VIZJUESh

9) The Ghislaine photo that’s similar to other Cabal Messages, is the sign she posed in front of that says “Good Boy.” Perhaps it’s a message, somebody isn’t being a VGB? ? @IPOT1776 did a great video on these coded Canine messages. https://t.co/GyrWZBuZIv

It doesn’t matter what the purpose of the manipulation is, just that we know its there. There is no point speculating about whether this is coded communication or something else. The point is that we are being manipulated and we are being fed a narrative while other aspects of this story are actively being buried. We cannot afford to let them bury this story and the truth with it.