In October, 2017 President Trump made pointed reference to the “Calm Before the Storm”? “You’ll find out,” he said when asked what storm. Is that storm now appearing on the horizon?  Recent actions by the president would indicate that something big could be brewing.

What’s coming our way, we do not know for sure.  However we do know the Marine Corp Reserve Notice was signed last Friday (October 3, 2019) and President Trump met with military leaders last night (October 7, 2019) to discuss “pressing national security issues” of the day.

Our Commander-in-Chief@realDonaldTrump has made it his priority to keep this country safe and empower our military leaders! Tonight he met w/ Sr. officials to discuss pressing national security issues facing our country. 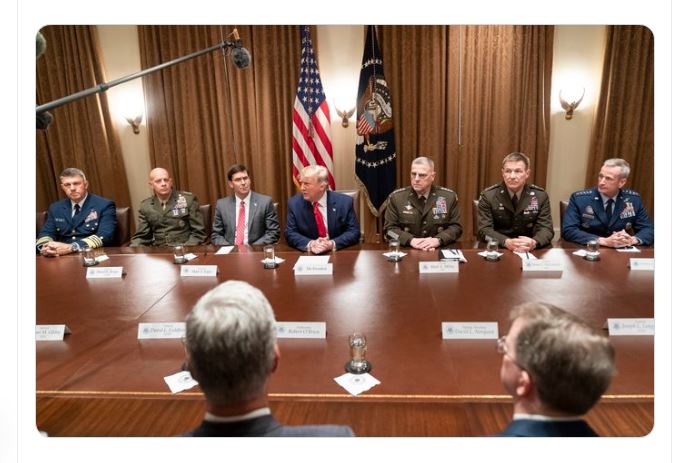 One of the Marine Corp Reserve’s missions is to give Federal assistance during a major disaster or emergency that may come within the United States to protect the Homeland.

U.S. Marines reserve units activated for “emergency within the United States” which “will come with little warning” – cites “threats in the Homeland”

Notably, Brigadier General Daniel L. Shipley was nominated by President Trump for the rank of major general, according to a Jan. 16, 2019 Defense.gov press announcement. Before serving in his current role, Shipley served as the deputy director, Program Analysis and Evaluation, Department of Programs and Resources for the U.S. Marines.

This new order is summarized as, “MARINES ORDERED TO ACTIVE DUTY ISO DEFENSE SUPPORT OF CIVIL AUTHORITIES.” (The term “ISO” means In Support Of”) (See full text of the order here.)


Note: There is disinfo being circulated about this order, claiming it was cancelled, but the cancelled order is 300/14, not 500/19. In fact, this new order 500/19 replaces a lot of previous orders, reestablishing the urgency of the situation and making sure any action to defend the Homeland is authorized by orders that are in good standing.

Many observers are concerned that with Democrats like Rep. Tlaib openly talking about which prisons to use for imprisoning President Trump and his cabinet, and with Hillary Clinton positioning herself to run for president, and with the IG’s FISA abuses report set to drop in a few weeks, the deep state Democrats have reached a point of desperation where they may attempt to initiate a “hot coup” (kinetic engagement, arrest or execution of the President and his Cabinet) to avoid going to prison themselves.

The entire CIA-run deep state media (i.e. Washington Post, NYY, CNN, etc.) are all in on the effort and now gaslighting the entire nation with ginned up “whistleblower” schemes that are wholesale fabrications.