January 26, 2020 — Patriots! Let me address in particular the least patient among us. They can be defined as wanting the Deep State on trial, convicted, sentenced and put away – some in coffins. If you are severely patience-deprived, you can save time and just cut to the final two paragraphs, but see if that serves.

By means of a very partisan process to impeach President Donald J. Trump, Articles of Impeachment have been delivered by the U.S. House of Representatives to the U.S. Senate charged with conducting the trial deliberating those charges. Let’s be precise in describing this particular item in the U.S. Constitution (source: original document).

The President, Vice President and all civil Officers of the United States, shall be removed from Office on Impeachment for, and Conviction of, Treason, Bribery, or other high Crimes and Misdemeanors.

So far so good. Attentive Patriots have listened to the laborious process conducted in the House and have reached the conclusion, ‘there is no there, there.’ They’ve charged two violations, abuse of power and obstruction of Congress, neither of which rise to the level of the definition within the Constitution as stated above.

And to make the point by legal documentation, POTUS team has responded appropriately with a formal Answer to the House. Note it begins by identifying the “Articles submitted by the House Democrats” and not simply the House members.

Nevertheless the week ended with the president’s support among the public at an all-time high. Rasmussen Reports that on a number of fronts, President Trump is holding his own. His monthly numbers:

Despite his impeachment by House Democrats last month, the president earned a monthly job approval of 49% in December, up two points from November and just one point shy of his high for 2019 of 50% in April.

The polls are numerous demonstrating that the public expects, no matter what comes in a trial, POTUS will be exonerated because there were no crimes, as defined by the U.S. Constitution for impeaching a sitting President.

Fat city, right?  Not so fast.

Next thing we hear is that there will be NO push by the president’s defense team to bring witnesses. That means that all those juicy stories investigated by one means or another, and some just plain gossip, will not be played out over months at great expense to the public. Furthermore and far more important, the obvious corruptocrats driving this very complicated and messy drama involving major and minor actors from several countries will not be called before the bar to swear to what has happened and be hauled away in handcuffs.

Aha! No wonder there are so many uber-impatient Patriots! Now we have the great bone of contention among our impatient fellow Patriots! Somehow they imagine that all those lawbreakers will get off scot free. Hang on, friends, frens and countrymen! 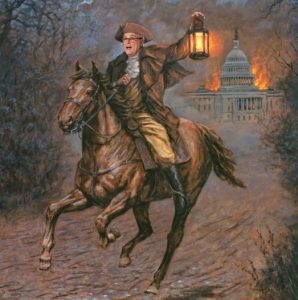 Enter Rudy Giuliani loudly proclaiming his own investigations on behalf of his client, Donald J. Trump, had turned up corruption all over Eastern Europe and he declared on Fox and Friends on Friday that “I can’t sit by and watch my country be sold out by Joe Biden.”  The former mayor of New York City then asked us all to watch his new podcast, debuting that morning at noon.

To our hard-pressed impatient friends, music to the ears! But then, America’s mayor goes on to say that even though we all want to see bad guys in the dock in this current trial, that is not the wise path. WHAT? From Fighting Rudy Revere sounding the alarm?

Again, slow down, Patriots! The president’s personal lawyer has begun a podcast series intended to fill in the blanks for those of us who run at issues with, shall we say, something less than prudent forethought. Thankfully Rudy spelled it all out for us here on Friday morning.

Rudy Giuliani Common Sense EP. 1: “Since No Crimes Exist, It Must Be Dismissed.” Thirty-five scant minutes to lay the groundwork for the way forward. Watch it, share it, break it down for your kids, talk about it anywhere you care to.

Bottom line:  Dismiss this case because there is no actual crime according to the statute (U.S. Constitution) under which the accusation is brought. Dismissal PRESERVES the Constitutional Process.

​You cannot deny Rudy Giuliani’s credentials re Corruption. Hence the PODCAST. Keep the public informed. ​ Rudy’s assignment now becomes one of educating the public. He will spoon-feed the evidence trail that he has seen, recorded and reported. ​Rudy will keep the public engaged with his podcasts until the LAW is ready – Durham, Barr, et al.

Three cheers for our POTUS! Every single move he has made to #DrainTheSwamp has been scrupulously conducted by the Law. It’s clear his primary goal is to Preserve the U.S. Constitution, protect the American people and Restore our Constitutional Republic, from the top down as well as the bottom up. If you don’t think that POTUS is directing the unfolding of this operation, think again, Patriots. Note the primary and most basic goal:

This can never happen to another president. ~~Donald J. Trump