~~ Editor’s Note: If you missed this a few days ago, there are some worthwhile links here to flesh out this on-going story.

Posted by Maggie on September 14, 2020 in From the Editors

Your decision in November is very, very blindingly evident, America.

Preserving and protecting our republic and Bill of Rights and U.S. Constitution? Or surrendering to the tyrannical intimidators and murderers so our republic will be “fundamentally transformed” into the Marxist version of “democracy?”

Also, it appears to be that the only use for these “protecting all from the Covid” masks is hiding the identity of these POS rioters. If guns and violence don’t worry them, I doubt the China virus will … 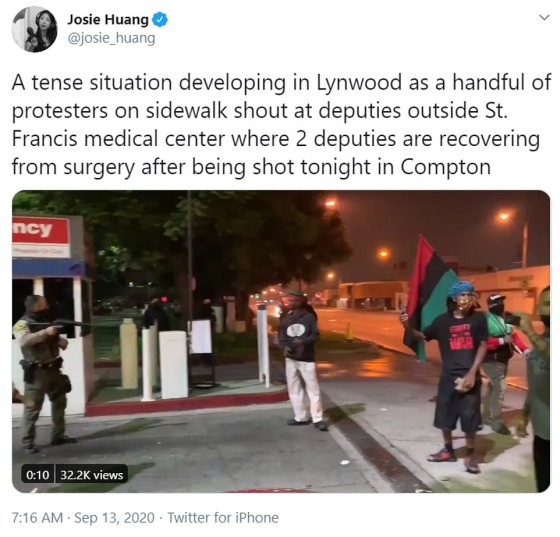 WSJ Editorial Board: After sheriff’s deputies shot in LA, protesters chant ‘We hope they die’ as they block the hospital ER entrance …

No one other than the shooter is responsible for the gunfire ambush Saturday of two Los Angeles County sheriff’s deputies as they sat in their patrol car. But the same can’t be said for the protesters who blocked the entrance to the hospital where the two are being treated, and chanted ‘we hope they die.’ The latter is a cultural poison nurtured by the left-wing anti-police movement sweeping the country. . . .

Democratic mayor Eric Garcetti called the chants and protests at the hospital ‘unacceptable’ and ‘abhorrent,’ but he and other Democrats need to do more to condemn and ostracize these protesters. Democrats may fear the wrath of Black Lives Matter, but the backlash elsewhere in America will be far greater if pleasure at cop killing becomes common on the left.

Policing reform is impossible amid a war on police. Mr. Garcetti and other mayors should abandon their cuts to law-enforcement budgets and express regular solidarity for cops on the beat. Without such a signal, police will continue to retreat from enforcing the law in crime-ridden neighborhoods, and those who suffer most will be the law-abiding in the likes of Compton and Flatbush….

The leftist MSM promoting the Marxist domestic terrorist minions in the city streets, and also starting mass forest fires on the West Coast, is now threatening if you don’t choose Harris/Biden … Biden/Harris and you re-elect President Trump in November 2020 — Well then, “WE RIOT!” …

The Atlantic has published an op-ed that argues that ‘law-and-order’ Republicans should vote for Democratic presidential nominee Joe Biden because Democrats will riot if he loses, refusing to accept the results if President Donald Trump wins re-election.

In an essay titled, ‘The Democrats May Not Be Able to Concede,’ Shadi Hamid writes: ‘A loss by Joe Biden under these circumstances is the worst case not because Trump will destroy America (he can’t), but because it is the outcome most likely to undermine faith in democracy, resulting in more of the social unrest and street battles that cities including Portland, Oregon, and Seattle have seen in recent months. For this reason, strictly law-and-order Republicans who have responded in dismay to scenes of rioting and looting have an interest in Biden winning—even if they could never bring themselves to vote for him.’ …

Read the whole thing. Since before the COVID-19 dust-up hit this nation, the Left and their worker drones in the demo-commie party and the MSM, have been very busy setting up the post-election “Purge” that they will bring down on this nation when Biden/Harris lose to a President Trump re-election win. We saw some of it post-election in 2016, mainly in Berkeley, California and NYC near Trump Tower. That was a practice run for these filthy bastards. And when Trump does win, these same demo-commies and their MSM have already set up a post-election conniption that’ll make the Florida 2000 recount bullsh*t look like a hiccup.

Twitchy: ‘Vote Dem or we’ll kill the country.’ The Atlantic’s Shadi Hamid deletes tweet and runs after being REKT for saying the quiet part out loud (we got it!)

Without getting distracted by the problematic nature of law enforcement and policing in this country, especially over the last 10-20 years … the fact remains that in what is supposed to be a civil society where the rule of a just and stable law is generally respected by the citizenry, mostly and hopefully because a sense of morality and ethics are drilled into us from an early age, police officers are who enforce that code when individuals disregard the latter. They are the physical embodiment of that code and serve as both a reminder of the consequences of disregarding it but more crucially the security that we can go about our lives unmolested in our own individual ‘pursuit of happiness.’….

Well this is what you get when you defund or otherwise abolish the police. Then again if the Democrats ever regain power, you can be sure that there will be police. Think Stormtroopers and other colorful characters who will be doing the law enforcement, mostly minus the law part. The Democrat-Media Complex and Party are either backing this violence and the insurrection and mayhem of the past three months or are otherwise gladly riding a rabid tiger in hopes of threatening the American public with worse if we refuse to dump Trump this November….

I have a feeling that we are heading towards Dirty Harry: Magnum Force and The Star Chamber territory where, one or more police officers go through the records of gang members and other assorted criminals who have flaunted and/or escaped justice and take care of business. Honestly, I’m at that point where I not only won’t care, but I’ll cheer it on.

Follow the link above for J.J.’s full context of this. It has been right in front of us for decades, as he stresses.

Joe Biden is on-record/on-video (right in his basement) this election cycle, saying the police should be defunded, and even decreased greatly in their “law and order” authority. Hell, Joe even has his Gun Collection Czar picked-out. Except that now Joe’s trying to insist he’s not calling for defunding the nation’s police, but ‘Trump is’. Yeah, that’ll work.

But part two to old Joe’s plan (well, the plan of his Marxist puppet masters) is to disarm the populace so that we are at the unimpeded mercy of the lawless that are currently in the streets, and will grow in strength when the career criminal ilk joins ranks with them. It is what The Atlantic refers to in weaponizing fear-mongering in its desperate attempt to interfere with our presidential election in less than two months …

Of course the MSM, CNN, covers for Joe …

Bonchie: Joe Biden Admits It, He’s Coming for Your Guns

Once you have confiscated all means of self defense, no one will be able to resist the jackboots.

That’s it, isn’t it? And the “jackboots” will be enlisted from the ANTIFA/BLM legions.

Streiff: Joe Biden Tries To Have It Both Ways on Anti-Police Violence

Katharine Gorka: How The 1960s Riots Foreshadow Today’s Communist Weaponization Of Black Pain: Many would have us believe that the riots and violence sweeping across America’s cities this year are spontaneous. But history and current evidence tell us otherwise.

LIZ PEEK: Attacks on Trump getting more unhinged – but here’s the bad news for Democrats

William A. Jacobson: Mike Bloomberg Wants To Buy Florida Election For Joe Biden for $100 Million: Bloomberg opening his wallet in Florida is a sign that Joe Biden is in big trouble in the state: “The spending will focus mostly on television and digital ads, in both English and Spanish.”

Beth Baumann: Surprise, Surprise: Data Reveals Where the Majority of Biden’s Donations Came from – and It’s Bad News for Dems

SALENA ZITO: The forgotten counties will make their voices heard: “For the first time that anyone could remember, Cambria County is no longer dominated by Democratic voter registrations. They lost that dominance quietly on Labor Day weekend when Pennsylvania Department of State registration numbers showed Republicans having 37,951 registrations and Democrats holding 37,826…”

Michael Goodwin: The Democrats’ partisan damage: “Future historians will chart the decades-long path of how we got to this perilous point, but they must not ignore the incredible damage done by Democrats’ decision to reject the legitimacy of the Trump presidency…”