July 13, 2021 – A new lawsuit alleges that members of the FBI’s “Domestic Terrorism” unit are sexual predators, who engaged in reckless and threatening behaviors creating a hostile work environment and then retaliated when a complaint was filed. The case, Karen Veltri vs Merrick Garland in his capacity as head of the FBI, was filed on July 1, 2021: Complaint for Sexual Harassment, Gender Discrimination, Hostile Work Environment and Retaliation.

Eric Striker reports the following about the lawsuit: 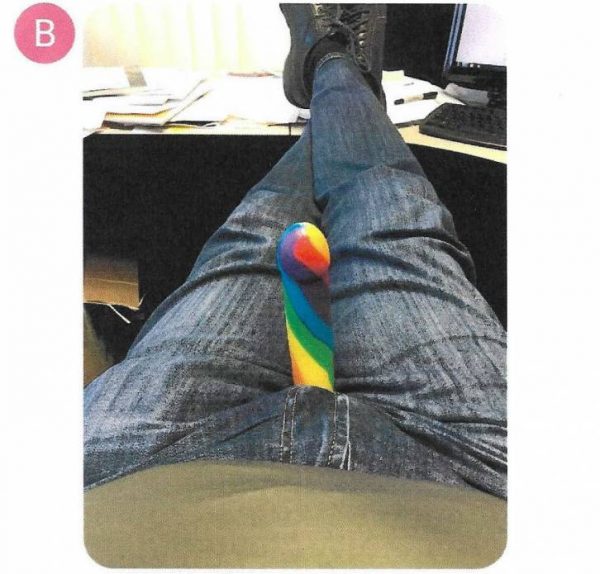 The photo above was submitted as evidence in a bombshell civil rights lawsuit by Supervisory Special Agent Karen Veltri against the Department of Justice over allegations of systematic sexual harassment, personal retaliation, and a general culture of reckless depravity during her time serving in the Las Vegas FBI’s counter-terrorism unit.

According to court documents obtained by National Justice, Veltri’s ordeal began in 2019 when she interviewed to work on the FBI’s human trafficking task force.

Veltri was rejected for the position after then-Las Vegas Assistant Special Agent in Charge Frank Cucinotta recommended that she be placed on his International Terrorism and Domestic Terrorism unit instead. Agent Ray Johnson, who had wanted to grant Veltri her desired position, would later claim that Cucinotta ‘fought’ him to get her placed under his direct chain of command.

Starting in early 2020, Cucinotta allegedly began making flirtatious comments, inquired about Veltri’s sex life and marital status, and was overheard elbowing another FBI agent and saying ‘she’s under me now.’

Over a period of many months, Cucinotta repeatedly made sexual advances against the plaintiff and would encourage her to stay late at his office but was rejected every time. He organized excuses for them to be alone together, and was especially persistent when his wife and kids went away on vacation.

Veltri repeatedly complained to Cucinotta’s superiors about the behavior and sought to avoid him, but Special Agent In Charge Aaron Rouse never investigated the behavior.

After Veltri filed official grievances over a hostile work environment, Cucinotta, who was angry at having his advances rejected, began retaliating against Veltri, including failing her on performance tests, doubling her workload, and demoting her.

Eventually Rouse had Cucinotta transferred out of the Las Vegas office, but instead of investigating him or suspending him, he awarded him a Medal of Excellency.

Ever since being transferred out of the Vegas office, Cucinotta, who styles himself as a ‘counter-terrorism’ expert that has worked with Israel, he remains employed at the FBI despite misconduct complaints.

During Cucinotta’s harassment campaign, Veltri states in her lawsuit that she complained about his behavior to Supervisory Special Agent Robert Bennett, who appears to have been brought out of retirement in March 2020 after enjoying a sinecure as executive director of the notoriously corrupt Nevada State Athletic Commission.

Bennett then admitted to the plaintiff that Cucinotta’s behavior was inappropriate, but instead of addressing the issue, he started engaging in disturbing sexual behavior as well.

Despite fears of retaliation after clashing with agent Cucinotta, Veltri sent the text messages and comments to the FBI’s Equal Employment Opportunities department.

Yet, once again nothing happened to Bennett. Instead, SAC Rouse and Assistant SAC A. Cynthia gave the pervert awards for his politically valuable high profile ‘domestic terrorism’ frame up of ‘white supremacists’ as black riots raged on, and began retaliating once again against Veltri, including behaving in physically intimidating and confrontational manners with her.

Having exhausted all avenues for relief, including contacting FBI Director Christopher Wray who in December of 2020 sent out a sanctimonious email about sexual harassment, Veltri decided to file a lawsuit against Merrick Garland and the Department of Justice.

FBI ‘Domestic Terror’ Agents Are Above The Law

One reason why the FBI agents accused of misconduct were tolerated by higher ups to an absurd extent is the nature of their work and the outcomes it produces.

The ridiculous narrative of white Nazis dressing up in black face to commit the acts of Antifa and BLM violence the nation was being shocked by during an election year was concocted by politicians and the media. The FBI’s ‘Boogaloo Bois’ arrest in Las Vegas played a vital role in providing perpetrators to help validate the lie.

According to the complaint, Bennett was also responsible for investigating leads into Trump supporters who entered the Capitol on January 6th.

Photographic evidence of sexual harassment at a major business would be a big institution in most circumstances, and this should be particularly so for the FBI — the appointed ‘woke’ guardians of ‘civil rights.’ – National Justice

This is one of the most disturbing things I have read about workplace harassment in a very long time. I worked for a law firm that handled employment litigation, including sexual harassment in the workplace and I have never seen anything this egregious. 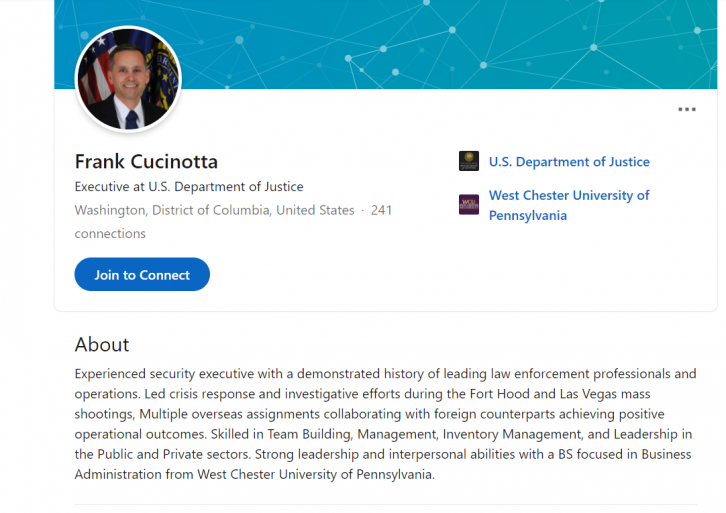 The man who allegedly severely sexually harassed Ms. Veltri, has his profile up on LinkedIn. This man should have been fired immediately from his job when she first complained about his predatory behavior. 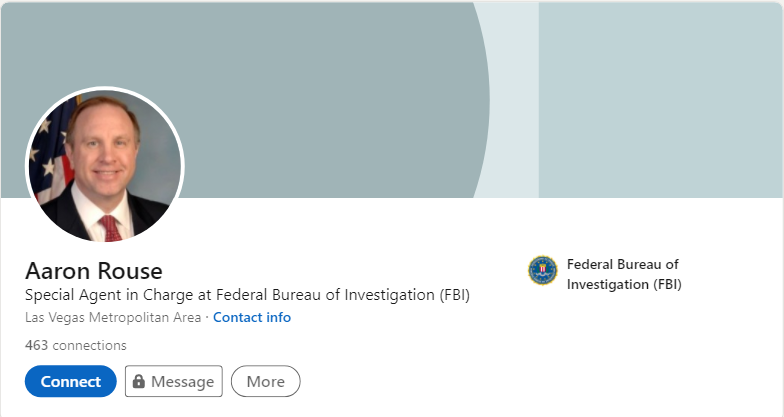 Aaron C. Rouse is also on LinkedIn, and he allegedly assisted in covering up the sexual abuse and workplace harassment.

Here are some excerpts from the Complaint that paint an extremely disturbing picture of the FBI’s “domestic terrorism” unit and Joint Terrorism Task Force: 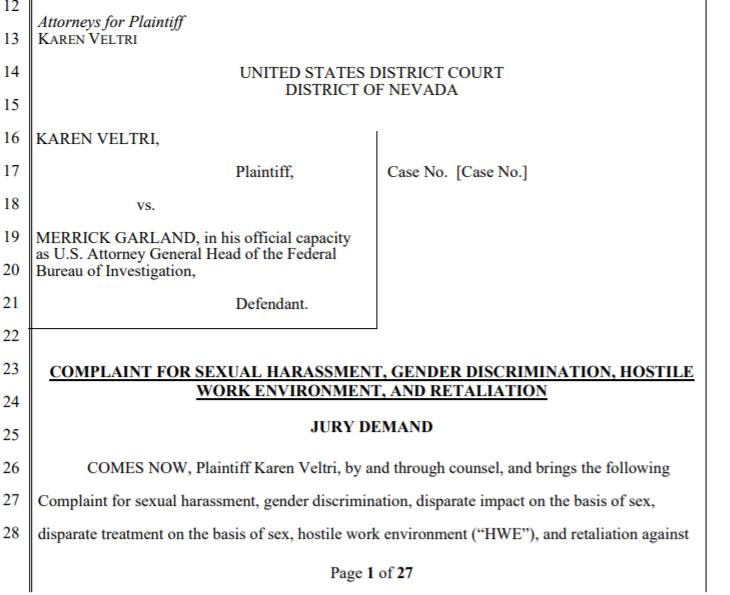 Here is the initial page of the Complaint filed by Ms. Veltri. 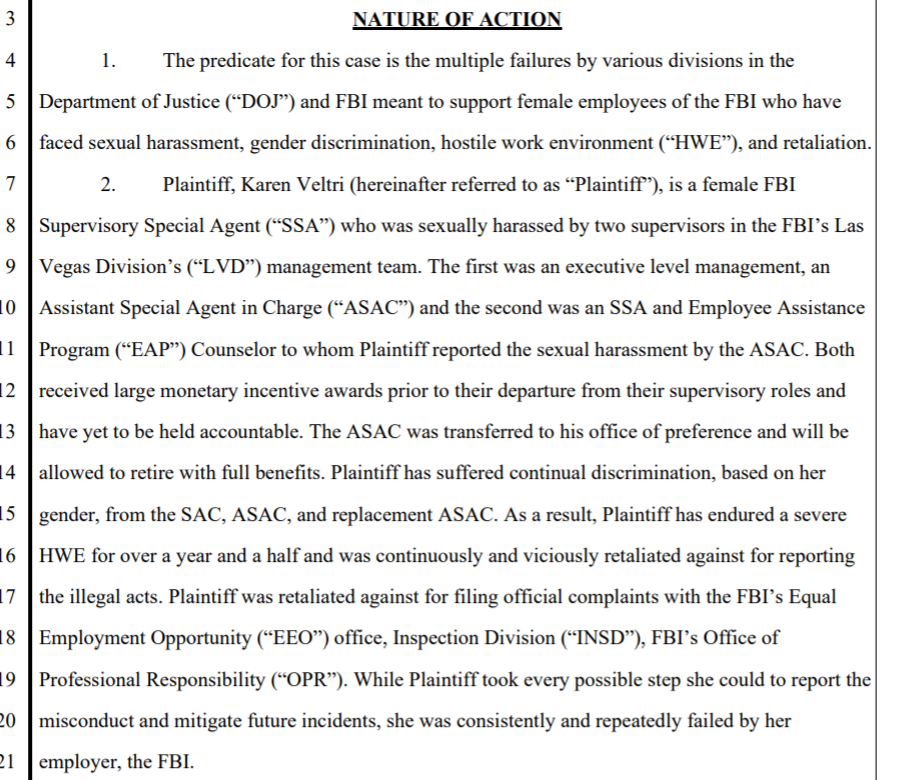 This is a grim inside look at the organization we are told is the world’s “premiere law enforcement agency.”

Ms. Veltri claims the FBI has a systemic problem of sexual harassment and discrimination against female employees. She claims the FBI Executive Management enabled the abuse, rewarded and promoted the perpetrators and ignored the complaints. 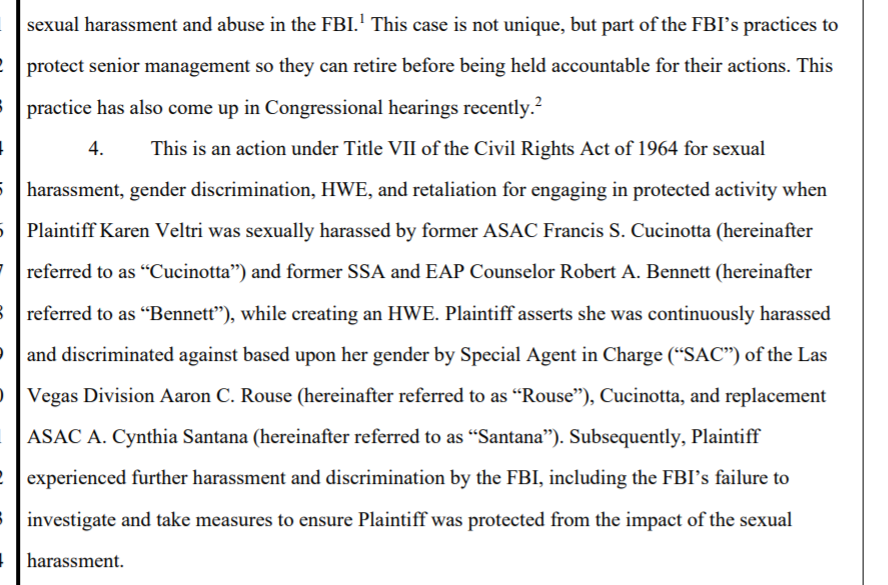 The allegations in this case are horrible. Ms. Veltri claims they are not unique, but part of a broader pattern of a “good old boys” network that allows and rewards this behavior and protects senior management from consequences for misconduct so they can retire with full benefits. 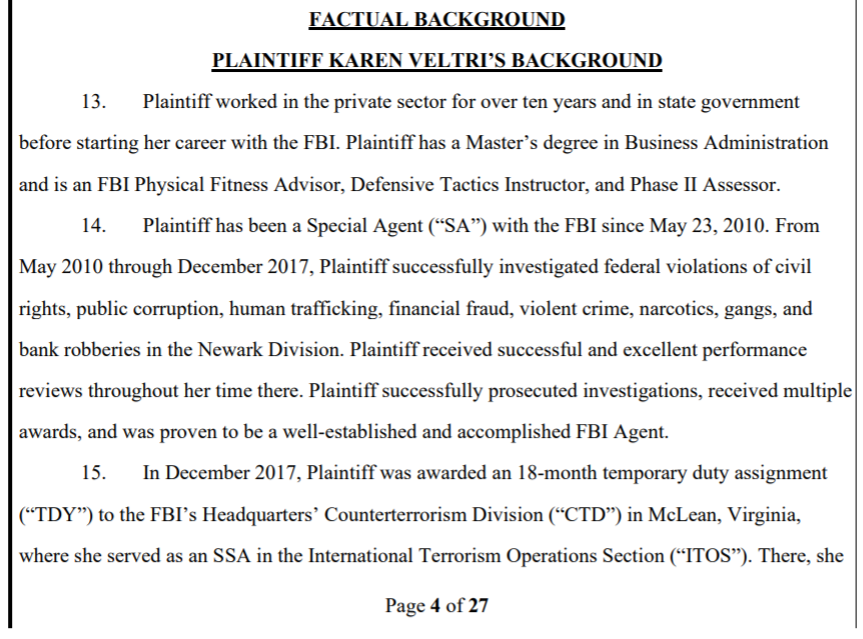 She demonstrates her career and high performance in the private sector, working for the state and inside the FBI itself for years. She always did well on performance reviews until she encountered the sexual predators who gave her negative performance reviews in retaliation for her complaints about their unwanted and repeated sexual advances. 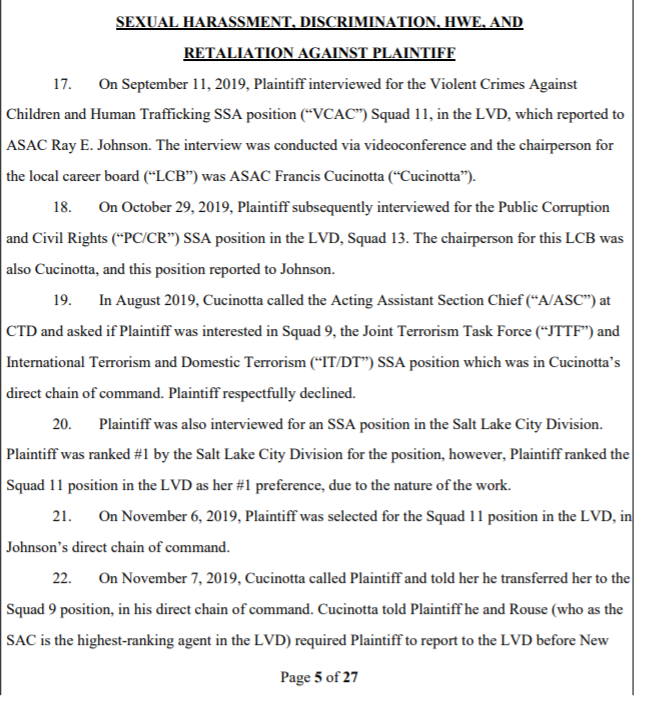 Cucinotta fought with another FBI official in order to get Ms. Veltri under his own chain of command, against her own wishes. 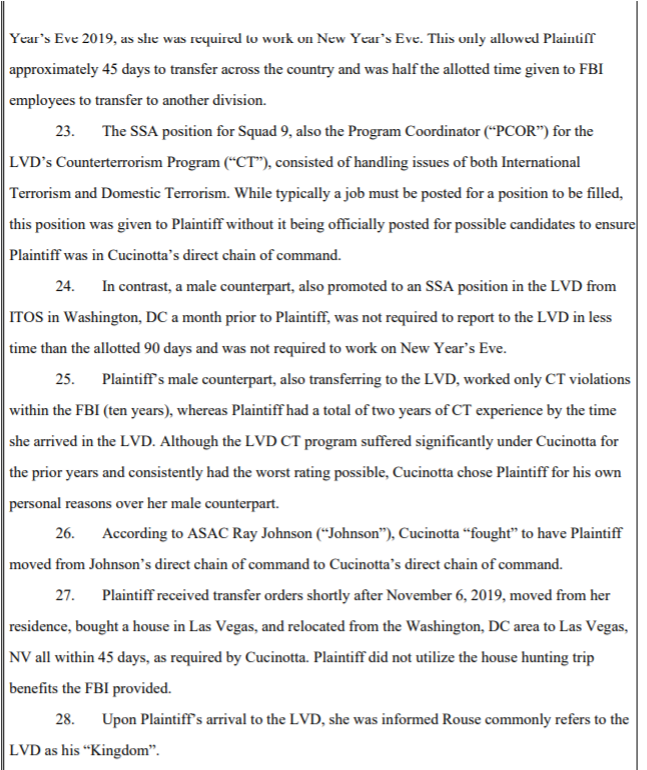 So here we find very predatory behavior. We have a man who runs the Las Vegas Division International and Domestic Terrorism unit that is more concerned with hiring attractive women than male counterparts with more experience. Referring to the division as his “kingdom” is not professional or becoming of senior management within a law enforcement setting.

His lying about her “choosing” to work there, when she actually didn’t want to, demonstrates dishonest and self-serving behavior. 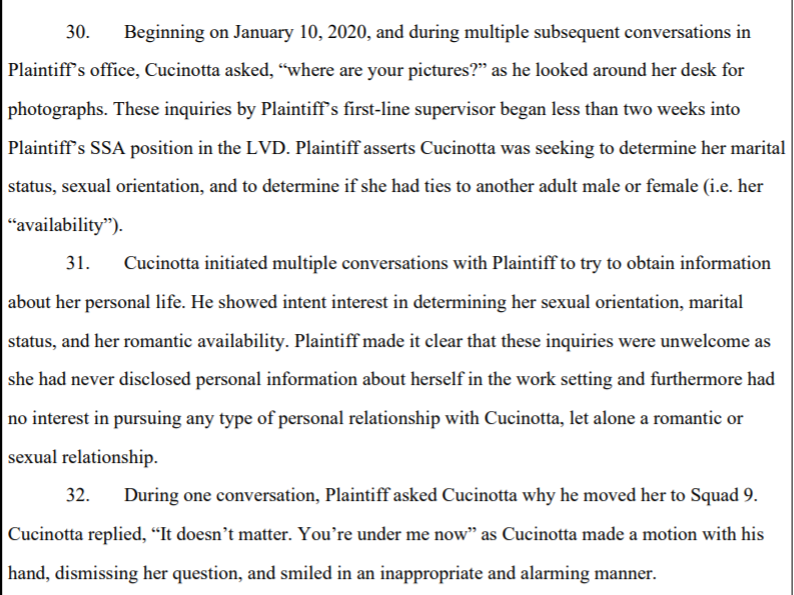 This behavior almost seems like something a sociopath would do. He appears to be acting like a stalker, in trying to obtain all the personal information about her he can. 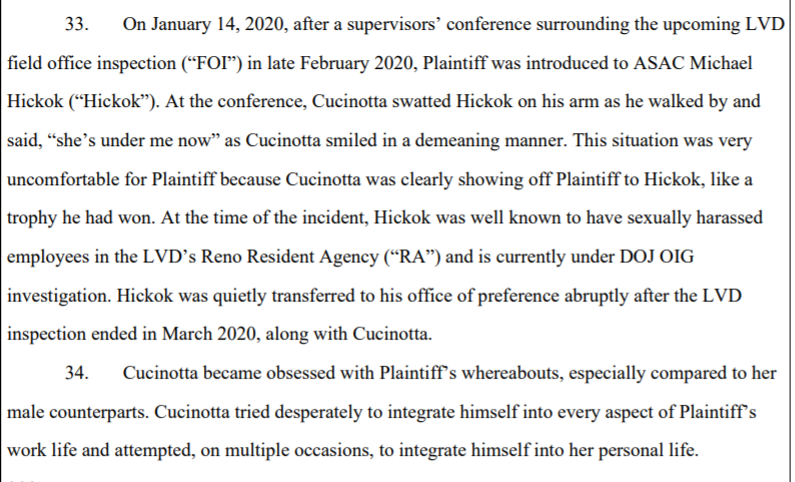 Cucinotta is acting in a domineering, obsessive sadistic manner and because he is part of the senior management, it was impossible for Ms. Veltri to get the unwanted behavior to stop. 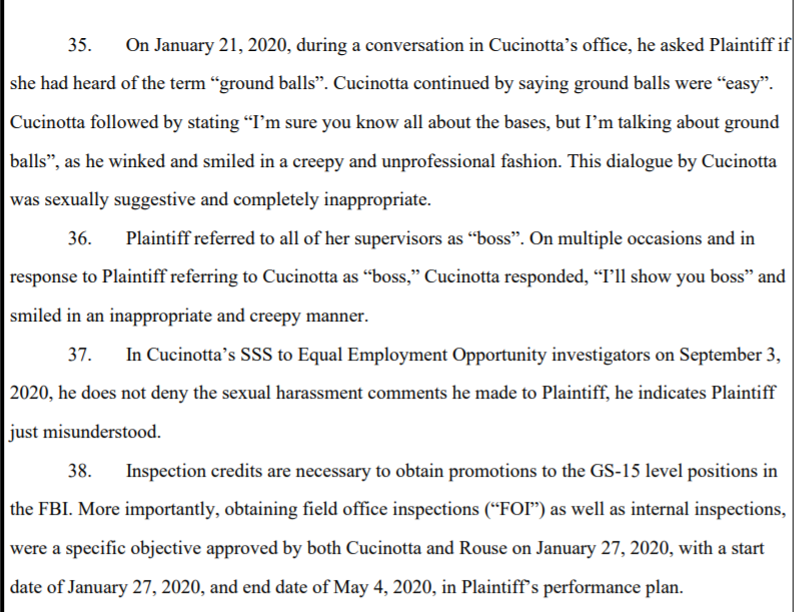 Incredibly, when she complained to the Equal Employment Opportunity investigators, he didn’t deny the sexual comments he made, and claimed she misunderstood him, yet they did not reprimand him at all! 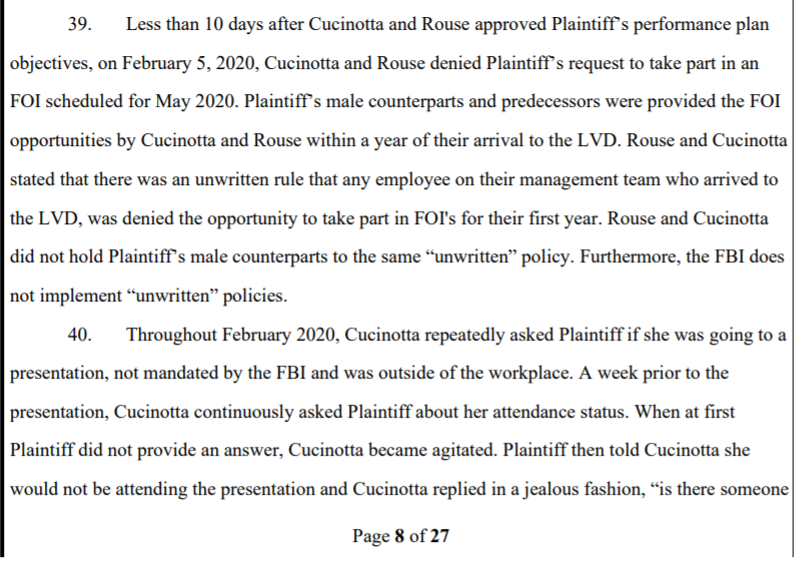 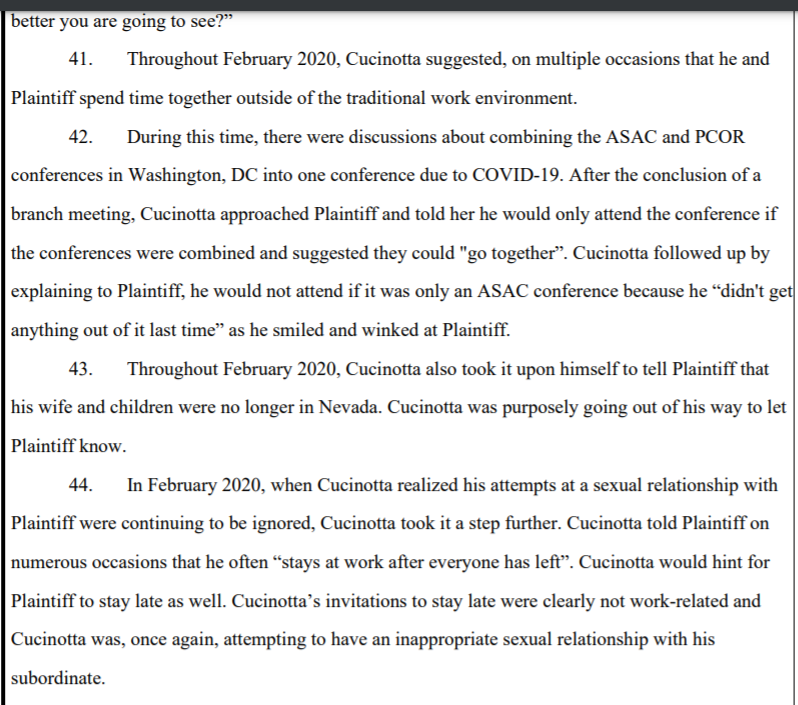 Asking her to “spend time with him” outside of work is clearly inappropriate and an obvious reference to sexual activity. 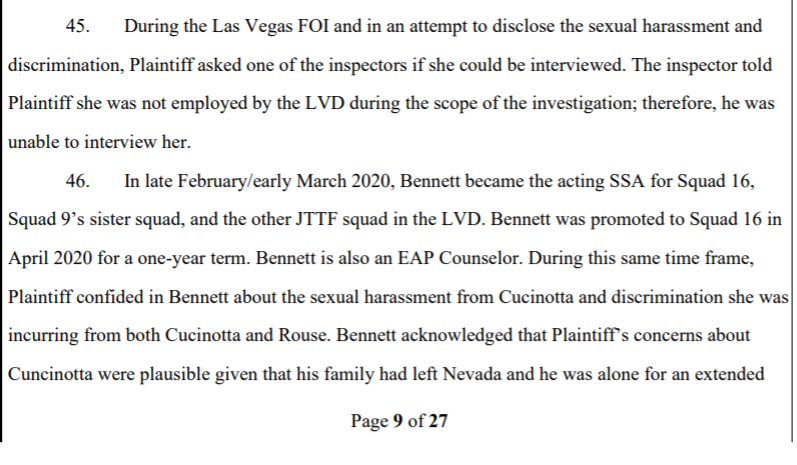 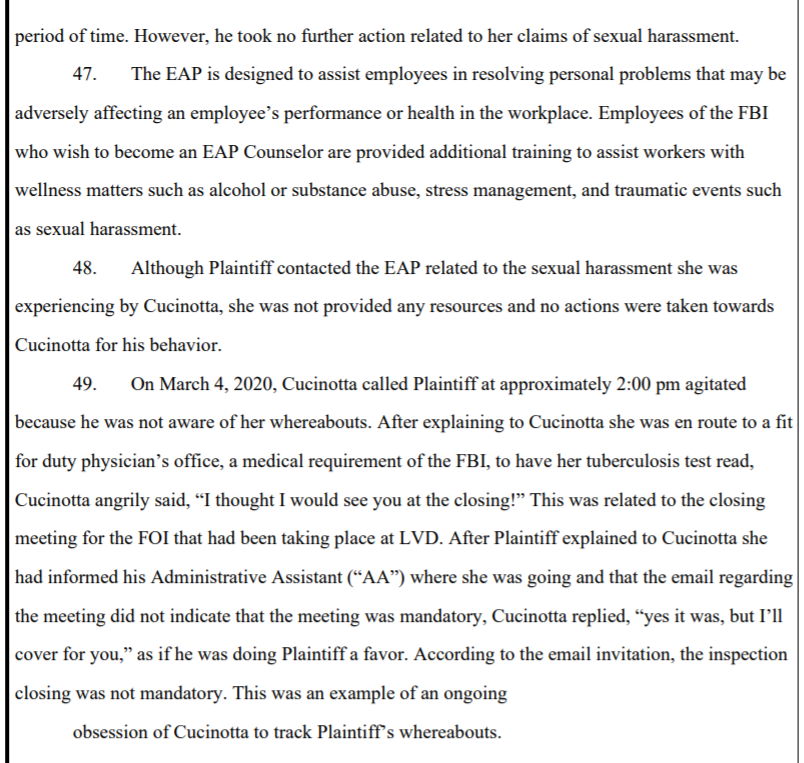 Ms. Veltri did everything she could to try to sound the alarm about the sexual harassment and toxic work environment within the FBI, contacting superiors and going through all the correct channels and still nothing was done. 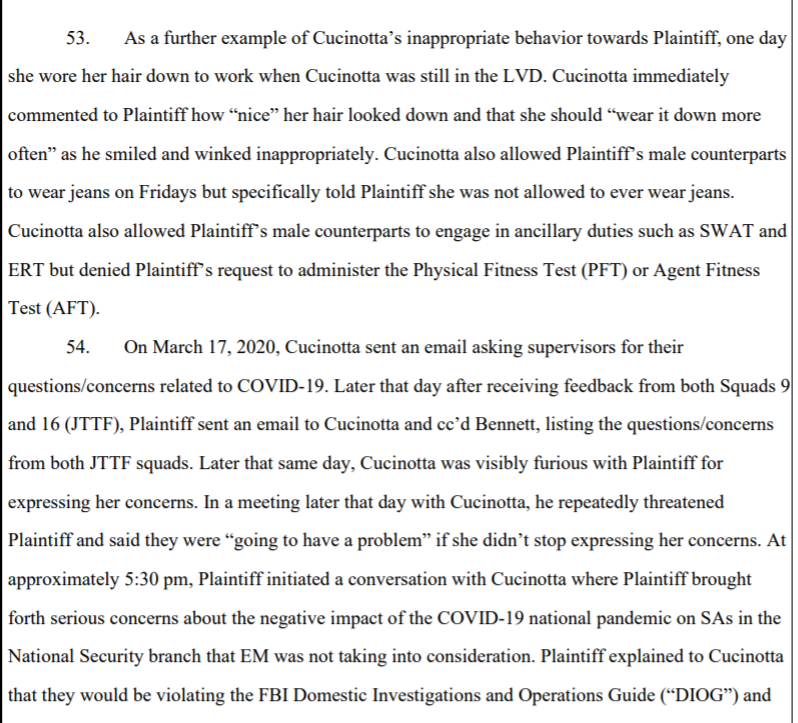 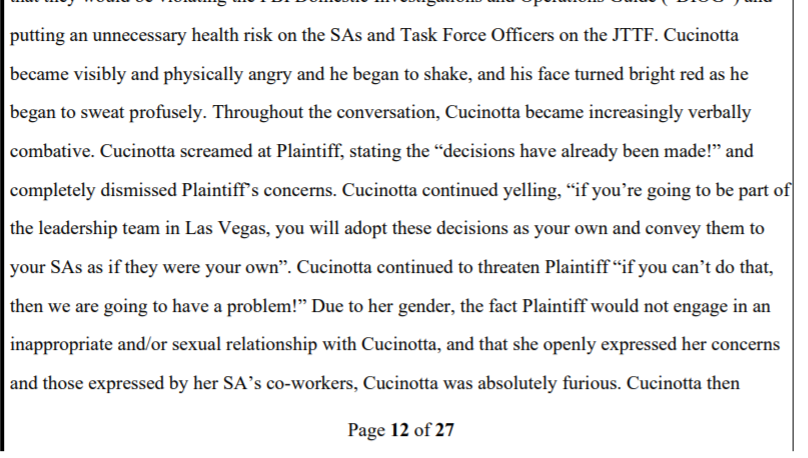 Amazingly this is only about halfway through the Complaint, and the allegations and behavior described become worse. This has a direct bearing on all the cases the FBI is working on, because we are seeing agents engage in abusive behavior as well as dishonesty and self-serving actions. If they are willing to do this to co-workers, what are they will to do to regular American citizens?

The FBI taking on the mantle of “wokeness” and far left social justice is an obvious attempt to say “nothing to see here,” while they repeatedly discriminate against women and violate their civil rights.

This should be front page news, but there is a total media blackout on the lawsuit and the allegations. The media works hand in glove with the FBI to perpetrate fraudulent narratives and perpetuate a corrupt and rotten system. Hopefully something is done soon to stop this out of control agency or this abuse will only continue to get worse.