Tatteredflag was my second favorite flag, he knew where he stood and he didn’t mind one bit because Old Glory came in first place. This was one of our many jokes we shared. As a patriotic veteran, he definitely approved the order and was glad to come in second place.

Several weeks have come and gone since I learned my friend died suddenly in a boating accident. Here at PatriotsSoapbox.com, the impact of his passing was widespread. He was a treasured stalwart, an inspiring man, a patriot brother, a spiritual compatriot, a friend, a helper to any and all.

It’s a strain now to remember his voice; it’s fading from my memory. I have other memories and encounters of him that continue to see me through. The first week was the hardest. Being in Discord was a painful reminder he was no longer active in there and yet I saw traces of him everywhere. His avatar light was not lit as it almost always was. I kept expecting to receive a message at any moment. I also felt that when I shut Discord down, I was disconnecting from him. Most days it’s still hard to believe he is gone from my virtual world and from this life.

I met @Tatteredflag a little over a year and a half ago. He was in my computer in what I call virtual world. As Help Desk Moderator, Tatteredflag was the welcoming committee in the Patriots’ Soapbox Discord. He was committed to his several roles in there. He had the utmost patience and he wielded it gracefully. I believe his record one day was spending three hours helping one person. His other roles in the Discord were gatekeeper and Show Moderator. He watched who came into the server and seemed to have an uncanny sense of who was going to make trouble and who was not.

One day I took the leap and joined in. I asked lots of questions and he patiently showed me the answers. I would come to learn he had done this hundreds of times before. We forged a friendship and he recruited me to help others. It was done innocently, but now I believe it was quite intentional.

When it was really busy, we would tag team in the late afternoons. He was almost seventy and said he had not really done much on the computer until this opportunity came along. He was incredibly intelligent and also pretty tech saavy.  He was a pro and I often relied on him for answers and troubleshooting.

As the Discord slowed down, I backed off from helping. I knew it was his forte and he handled it well. I continued to look for ways to get involved but felt like I did not have much for skills. He continued to be supportive and encouraged me to stick around and he was glad for any help in the Discord. He didn’t pressure me but gently pulled on my heartstrings. He saw in me that I liked helping and continued to draw that out of me. I don’t think Tatteredflag truly realized the impact he made at the Patriots’ Soapbox. I’m sure he knew he made a difference, but I don’t think he knew the full extent of the reach of his presence and how he touched many of us. He really was a “Fisher of Men” not only did he give me a fish but he was trying to teach me to fish, so to speak.

Did he know what he was doing? I ponder how God will use us even when we don’t know it? I think that is by far the best way because it is so purely done in love and kindness. God was using him in a very ordinary way that was extraordinary to many of us here at The Patriots’ Soapbox. After his death the outpouring of sentiments from others was overwhelming to me. I realized he didn’t just make me feel special. No, he did this with many people here. 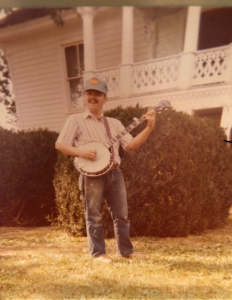 I often asked him to tell me stories, he was happy to oblige. He was a great storyteller and he had lived in several different countries as a young man and traveled extensively. He had a great love for his family, expressing several times – family was everything. For most of his adult life, I believe he was a construction worker with skills in carpentry. He had a painful health condition but you wouldn’t know it, he didn’t complain about it. And he loved nature and animals which speaks to his heart, as big as a washtub.

Now, I am reminded daily of his existence in my virtual world. The times can be discouraging on any given day and now especially for so many. The masks mandates, the protesting and riots, the media, censoring as well as the social distancing, all cause the sense of isolation. What Tatteredflag did was spread joy, make friends and help people be connected. He faithfully did ordinary small things every day. You could count on him and many of us did.

Tatteredflag took respect and security seriously. He believed in our 2nd Amendment and he had a conceal and carry permit. He volunteered and took classes to protect his church against shootings. One day he shared a video of a man who was selling a fold-up weapon and case. As I often did with Tatteredflag’s stories and jokes, I shared this video with my husband. Tatteredflag told me it was on his Christmas list and when I showed the Hubs he said playfully, “hey as long as Tattered gets one, I want one too!” He quickly added something like “while we are pretending, make that two!” We laughed and I later messaged Tattered and told him he was a troublemaker which he thought was funny. I learned later that Tattered had shared that video with several others. 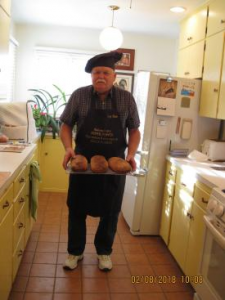 Robert with his Baking

My hubby was connected to Tatteredflag too. My husband had asked several times if we should plan a meetup with Tatteredflag. I would joke with both of them, “oh no, you don’t – once you meet, I will be a third wheel! Forget that!” The Hubs was touched and shed a tear when he heard about Tatteredflag and he remarked that he was fishing, doing something he loved. He gently reminded me that Tatteredflag enriched our lives and helped me to cope with this current state of affairs in the world. He had such range in his personality. He could be deep and serious. However he was also a spirited joker and filled with joy. I find it so interesting that I could become so attached to someone virtually. I never did meet him in person much to my dismay. I often wished he had been my neighbor.

Tatteredflag shared the following story with some of us. He was not happy about the mask mandates. He had gone to the grocery store and came around the corner and saw a young man wearing a mask. The mask was a fake beard, like ZZ Top type beards. This young man had a fake beard pulled all the way up to just under his eyes covering his nose completely. It made Tatteredflag grin, so he gave the young man a thumbs up and said “Right on bro, I love your mask.” Tatteredflag then went on to say to the young man that the virus hype was fake so why not wear a fake mask too. They agreed and both had a great laugh as they parted ways. Tatteredflag went onto say he woke up the next morning thinking about that encounter and it got him giggling again. I loved his sense of humor. We often laughed at ourselves and each other.

On Youtube, Tatterflag was a Blue Wrench Mod in the live chat where he was well known to many long-timers. He would often grab video and article links for the live chatters and also drop the Discord link hoping someone new might come into the conversation. Several comments were made about him being memorable in live chat and he certainly was. He was good at making connections to someone through some mutual thing. He had a gift for hospitality and used it lavishly wherever he was. He wove a tapestry at the Soapox both in the Youtube side which he coined the ‘upstairs,’ and the ‘basement’ was his name for Discord.

A few days before he passed he posted this message. YouTube had knocked the channel offline and he was as feisty and salty as he was true to his ideals:

This next election is for all of the marbles and losing is not an option. Everyone needs to volunteer at your local Republican office and assist in any way that you can.  You can now call from home so there is no reason not to get involved.  If all you can offer is one hour per week they will be very happy for your support.

Please volunteer I know that your efforts will make a difference

Tatteredflag was humble. He didn’t set out to do anything other than get involved to help people. He did what he could, with what he had, and where he stood. That was the lesson he gave me: get involved, do something and if you can, do it with joy. I think he would have rather liked this conclusion I have come drawn. Most certainly we would have laughed about it.

Teasing him about his anon name, I would ask “how is the view up there?” In my heart I find a peace knowing that his view is forever glorious.  Up until his untimely death, he most likely did not know his reach or the impression he made on hearts. It’s comforting to know he knows now. It made all the difference in the world at least to me at this juncture of my life.

Tattaredflag knew his Maker, he served his country and he was a patriot. I’m so very grateful. Thank you God for crossing our paths with this ordinary man who to me was anything but, who called himself Tatteredflag. I’m so glad you picked me to be part of your patriotic-spiritual family.

A fantastic tribute to an incredible Patriot. Well done SunnyDays Ahead

I had just met TatteredFlag a few days before his tragic death. Thank you, Sunny, for such a lovely tribute to him. It certainly rings true to my experience as well.