NEW: Prosecutor John Durham has told a cyber lawyer — who works for the firm that repped Clinton campaign — that he wants to indict him on suspicion of lying about who he repped when he told F.B.I. in '16 about potential ties b/w Trump and Russia. https://t.co/KiSUIeGuzh

Rumors of this indictment began swirling yesterday when the New York Times reported that Durham was “seeking” to indict Sussmann for lying to the FBI.

The scam that Trump was using a secret server to communicate with a Russian bank was promoted by Hillary herself, and touted by media outlets led by @Slate. Like so much that comprised Russiagate, it was a total fraud concocted by the DNC & media allies:https://t.co/mwKa2REj5f

Interestingly enough, Sussmann is tied to Crowdstrike, the firm the Democrat National Committee hired and when that connection came under scrutiny, the DNC claimed their servers were “hacked” by Russia.

Remember that an FBI lawyer pled guilty to lying to the FISA court in order to obtain warrants to spy on former Trump campaign official Carter Page.

The real criminals weren't people colluding with Russia but those who perpetrated the Russiagate fraud:https://t.co/X0QgL5zdDj

So, Hillary’s senior policy advisor (and chief propagandist) Jake Sullivan now works for the Biden Administration, to no one’s surprise.

Savage has done good and important reporting in the past but there's probably no corporate journalist except Bob Woodward more linked to and intertwined with Democratic security state operatives, and that's what happens when reporters become their tools:https://t.co/UCYaVwLnv1

It’s amazing how effectively the media was used to launder lies from both a partisan political party as well as the U.S. Intelligence Community (IC).

Along with the FBI lawyer who previously pled guilty for lying to the FISA court to spy on ex-Trump campaign official Carter Page, it's clear that much of the criminality of Russiagate was not from any Trump/Russia collusion but by those who fabricated this conspiracy theory.

Does this Sussman news indicate that the walls are closing in on John Brennan and his CIA “assessment” team as well as Clinton herself?

The corporate media was so heavily invested in the Trump/Russia conspiracy fraud, and hatred for Trump is still sufficiently high, that we haven't come close to acknowledging what a gigantic fraud the media perpetrated on the country for 5 years, all with this overarching them: pic.twitter.com/oCT7rULIua

When will members of the media be held accountable for KNOWINGLY spreading disinformation and participating in a propaganda warfare campaign against the American people?

It looks as though Durham is playing it absolutely by the book, not pulling the trigger on an indictment unless he absolutely can prove the crime in an airtight case. “I mean, what more evidence do you need? It’s very, very obvious.” –Natasha on the Alfa Bank story in October 2018, to the approval of two other Russiagate disinformation actors.

Interestingly enough, despite the constant attacks on both sides of the political aisle, “Q” was posting and hinting about Sussman years ago. See the following Posts: 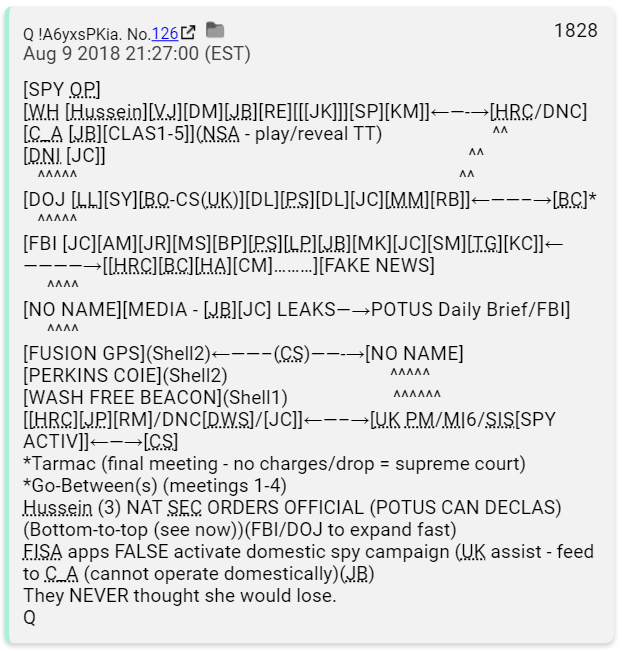 This post outlined how the entire operation was run, and Perkins Coie is named as is Christopher Steele. 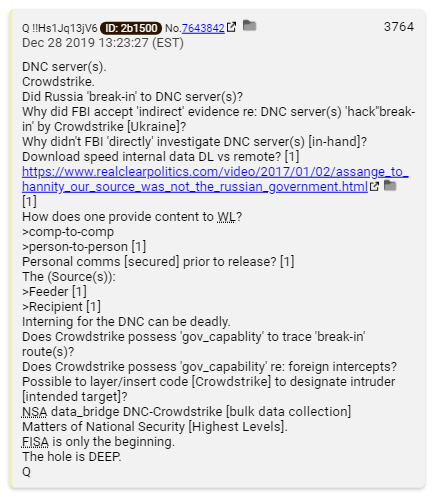 Sussmann himself is connected to Crowdstrike, and we have to wonder if that company was his avenue to access “non-public” information about the Trump campaign. 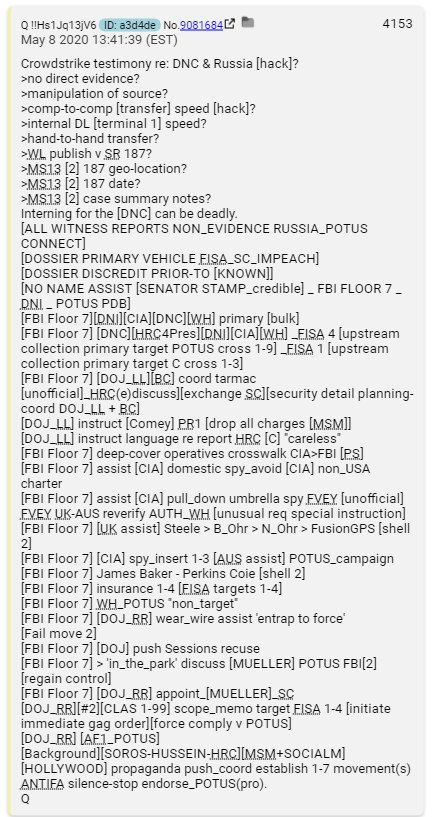 It really is incredible reading these posts now, given the current context.

Post 2332 was the most interesting regarding Sussmann and his role with the DNC and Perkins Coie.

New and interesting information in the Sussmann indictment. His tech executive client allegedly accessed non-public info about Trump, and they coordinated all of this with agents of the Clinton campaign. Are the walls closing in? pic.twitter.com/kZMsf6MYfE

This thread by Ross is interesting.

Sussmann billed the Clinton campaign for the time he spent meeting with reporters to plant the phony Alfa Bank story pic.twitter.com/npUvss9vVT

This is truly incredible stuff.

communications channel between the Trump Organization + a Russia-based bank. Sussmann, who had previously represented the DNC in connection with a cyber hack, falsely stated to the GC that he was not bringing these allegations to the FBI on behalf of any client.”

Even the Huffington Post had to report on the story:

A federal grand jury has returned an indictment against cybersecurity attorney Michael Sussmann, who represented the Democratic National Committee in connection with the 2016 Russia hack, accusing him of lying to the FBI about who he was representing.

The grand jury indictment accuses Sussmann of lying when he ‘stated to the General Counsel of the FBI that he was not acting on behalf of any client in conveying particular allegations concerning a Presidential candidate, when in truth, and in fact, as the defendant well knew, he was acting on behalf of specific clients, namely, Tech Executive-1 and the Clinton Campaign.’

The indictment, as The New York Times reported yesterday, was sought by John Durham, whom the Trump administration named special counsel to investigate the Russia probe. The indictment was returned just before the five-year statute of limitations expired.

In a statement to the Times ahead of the indictment, Sussmann’s attorneys said he ‘has committed no crime’ and that a prosecution ‘would be baseless, unprecedented and an unwarranted deviation from the apolitical and principled way in which the Department of Justice is supposed to do its work.’ – Huffington Post

It’s remarkable there is no formal apology coming from Huffington after they profited for years on the false story. Perhaps it’s not that remarkable given the obvious indications of media collusion with political operatives in recent times.

"Sussmann billed his time in this meeting to the Clinton Campaign…"

This confirms the “laundering chart” that Q posted years ago. Durham’s real target here appears to be James Baker from the FBI, and that he is going after Sussmann because each of them contradicted the other.

Steele had just produced a series of three new memos dated Sept. 14, 2016. One of these memos directly referenced Alfa Bank—misspelled in Steele’s memo as “Alpha.”https://t.co/Jyg6h7B93e

I am sure that was simply a coincidence and there was no coordination at all.

6) The information that Sussmann provided to Baker on Alfa Bank’s alleged communications with a Trump Tower server was later detailed in a since-debunked article by Slate, published on Oct. 31, 2016.https://t.co/5MN5WsJ0eJ

This is a real disinformation operation, and a highly coordinated one at that.

8) The other article published on Oct. 31, by Mother Jones reporter David Corn, provided the first public reporting on the existence of the Steele dossier.

10) The Alfa Bank story took off—despite the same-day story from The New York Times that specifically noted the FBI had investigated that matter and found nothing untoward.

Sussmann’s decision to choose Baker as his FBI contact was apparently effective.
/END

And that is the big question. Will Baker be called in to explain this?

Will the other leaders of the hoax at the FBI face any repercussions for this?

You can read the full indictment here: