WASHINGTON, D.C. Aug 29, 2019 – The Inspector General of the Department of Justice today released an 83-page report entitled ‘Report of Investigation of Former Federal Bureau of Investigation Director James Comey’s Disclosure of Sensitive Investigative Information and Handling of Certain Memoranda’ that details the corrupt actions taken by Comey during his time as the head of the FBI.

JW received 6 pages of records from the FBI showing that a month after James Comey was fired by President Trump, FBI agents visited his home & collected “as evidence” 4 memos that allegedly detail conversations he had w/@realDonaldTrump. READ MORE: https://t.co/qWdEuJtZ5Q

To summarize the initial 20 pages of the Report: 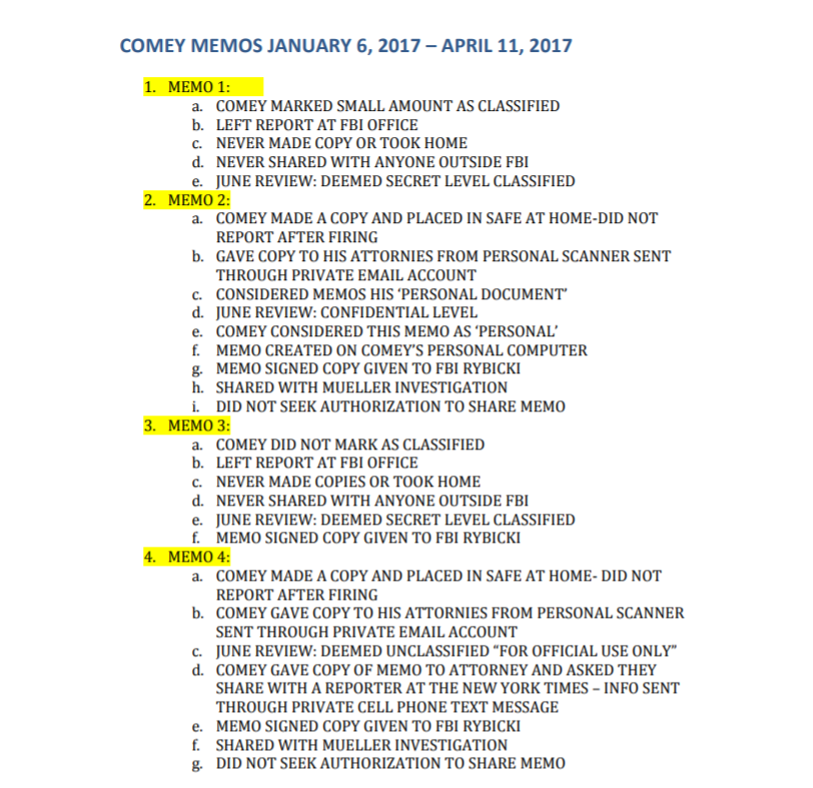 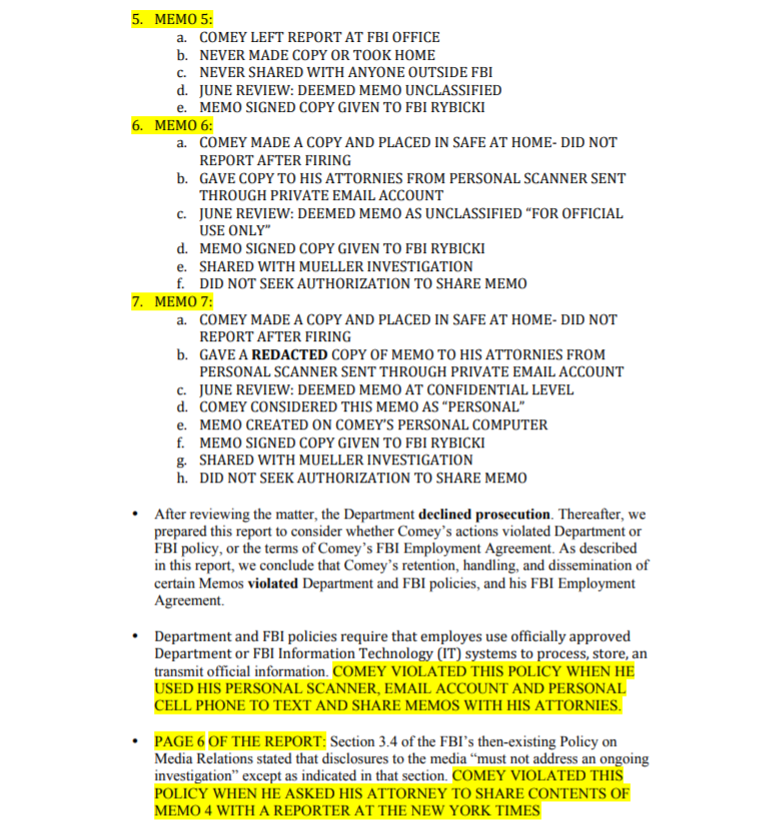 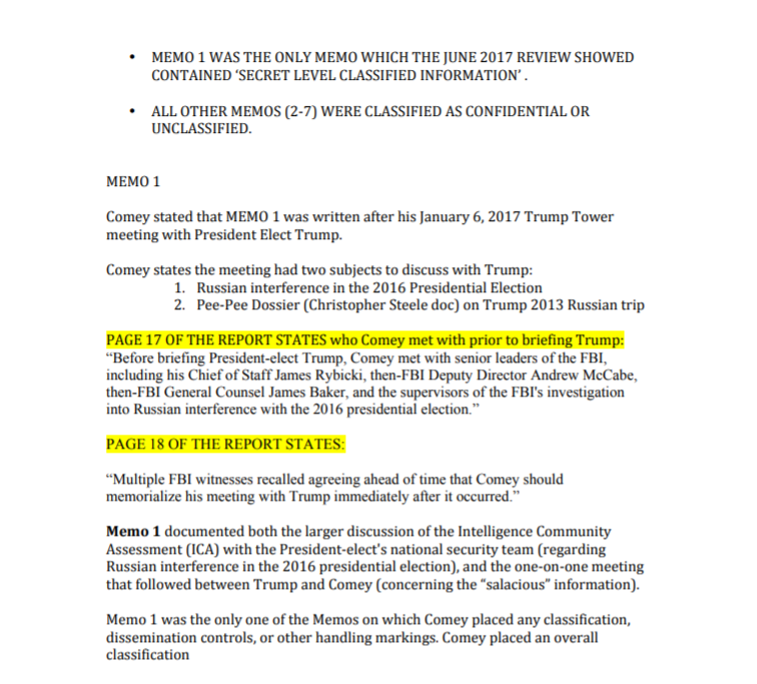 Investigative journalist Byron York has started digging into the report as well and noticed something disturbing:

This absurd juvenile plot was just one of many actions that were taken to try to entrap Trump campaign officials:

“On Friday, Jan. 6, 2017, Comey, along with CIA head John Brennan, National Intelligence chief James Clapper, and NSA Director Mike Rogers, met with President-elect Trump in Trump Tower in New York. Together, they briefed Trump on the findings of the intelligence community investigation into Russian efforts to interfere in the 2016 election.

But the group, and especially Comey, had bigger plans than that. Before the meeting, they agreed that after briefing the president-elect on Russian efforts, the others would leave, and Comey would stay to brief Trump alone about the Steele Moscow sex allegation.

Comey and top FBI officials prepared meticulously for the moment. The IG report says Comey had a planning meeting with FBI Deputy Director Andrew McCabe, chief of staff James Rybicki, general counsel James Baker, and “the supervisors of the FBI’s investigation into Russian interference with the 2016 presidential election.” (It is unclear who was in that last group, although the now-famous FBI officials Peter Strzok and Lisa Page played large roles in the investigation.)

The IG report says the group “agreed that the briefing needed to be one-on-one, so that Comey could present the ‘salacious’ information in the most discreet and least embarrassing way.” But however it was presented, the FBI leaders worried that Trump might “perceive the one-on-one briefing as an effort to hold information over him like a ‘Hoover-esque type of plot.'” That was a reference to the FBI’s notorious founding director J. Edgar Hoover, who relished keeping (and using) embarrassing secrets on top political leaders.

The group discussed how Trump might react. In particular, they considered whether he would “make statements about or provide information of value to the pending Russia interference investigation” known as “Crossfire Hurricane.”

Perhaps Trump would say something incriminating. The FBI officials made plans for Comey, immediately after leaving the meeting, to write down everything he could remember about whatever Trump said. Comey also wanted to discuss Trump’s reactions with top aides immediately. Comey told the inspector general it was “important for FBI executive managers to be ‘able to share in [Comey’s] recall of the salient details of those conversations.'” Bureau officials also wanted to be able to respond if Trump publicly “misrepresent[ed] what happened in the encounter.” – Byron York, Washington Examiner

More information is continuing to come out:

BREAKING: Comey granted his New York Times leaker pal Richman "special" classified clearance up to TS/SCI from June 2015 (when Trump announced his candidacy) to July 2017 (after Trump fired Comey), even though Richman was employed as a college professor and not the FBI

Saint James himself decided to arrogantly display his lack of integrity by attempting to spin and justify the actions he took to protect an international criminal cabal:

DOJ IG "found no evidence that Comey or his attorneys released any of the classified information contained in any of the memos to members of the media." I don’t need a public apology from those who defamed me, but a quick message with a “sorry we lied about you” would be nice.

It is clear that much more is to be learned about this coup attempt.

At 1/6/17 Trump Tower meeting, Comey told president-elect, 'We are not investigating you, sir.' At that moment, Comey had Crossfire Hurricane team waiting for secure videoconference on Trump response to Steele dossier allegations. https://t.co/aAio3vK6ze

Controlled opposition shills like Jack Posobiec are tweeting today trying to demoralize Q supporters, even though Q predicted the separate Comey report way before any of these ‘journalists’.

17. Expected "in hours"? Even Laura says she didn't know there would be a separate report on James Comey, unlike those who follow #QAnon've known since last May 23 (above, 15.). #Q pic.twitter.com/nKclj8Kiit

20. #QAnon RG: If [C]omey's not prosecuted for perjury, how could anyone else possibly be? pic.twitter.com/RoFVgOjnJy

27. "#Comey expressed .. to President Trump..that the FBI's ability to conduct its work is compromised 'if people run around telling the press what we do'”, yet "Comey ..act[ed] unilaterally and inconsistent with Department policy." #Comeyreport #qanonposts pic.twitter.com/yoXjtx5U3C

29. As with what was done to @GenFlynn, Baker and McCabe conspired with Comey to present the phony "salacious" material to the President of the United States in a manner sufficiently deceitful of purpose such that he may provide info of #RussiaHoax value to be used against him. pic.twitter.com/Dg3WjSKkMQ

31. Page 18 (above, 30.) reveals that tho deceiving @POTUS-elect to understand that intent of the private 1:1 meeting with Comey was to anticipate "salacious" #dossier impact in confidence, the real intent was to violate trust, & spy every word immediately to the plotters. #QAnon pic.twitter.com/BxVwHNzzNk

33. Hidden under the #RussiaHoax defense, the dimensions of this treasonous, seditious conspiracy are mind-boggling! The hoax is essential to maintain cover for the treason. #QAnon #Q pic.twitter.com/6GCHtGMwq6

35. #Comey DOES NOT create a memo about his call with @POTUS where POTUS is concerned about the media reports. Of course not, he engineered them. Memorializing those would help incriminate him. pp. 18-19 pic.twitter.com/YcnIeS4oXL

37. #Comey doesn’t leak memo 3 because it would reveal their FISA warrant on @GenFlynn. #QAnon #Q pic.twitter.com/J631goyQ07

This story is still developing, please check back for updates!