As a writer for Patriots Soapbox, I contemplated contacting our President to request an interview to answer some questions I had while writing an article today. So I went on my merry way to Google and lo and behold this is what popped up when I typed in my query “President Donald J. Trump Contact”. 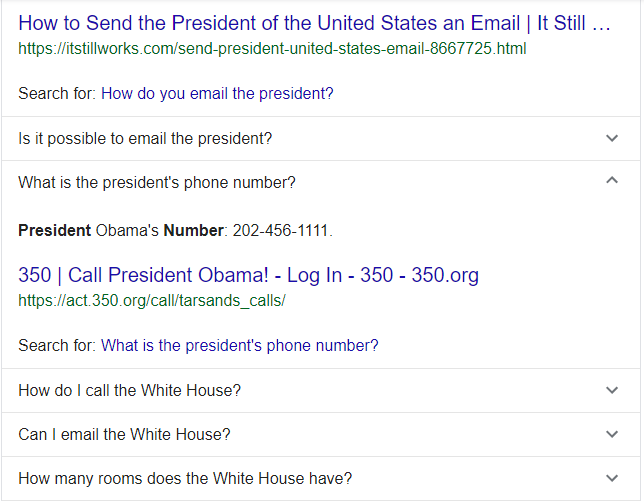 Getting the contact information for former President Obama when I asked for President Trump is like going to a restaurant and ordering a steak and potatoes and being given fish and a salad.

Why does Google presume I need to be contacting Obama rather than Trump?

Why would a restaurant presume I need to be eating fish instead of steak?

Now, I’m just a disabled former nurse who never expected to actually get a reply from our president. I write articles for Patriots Soapbox because they along with other independent news sites have literally saved my life.

I was profoundly depressed after my open heart surgery. I felt I had nothing left to live for. My long term memories were mostly gone, my left side was extremely weak. Speaking was a trial, as many common words were seemingly wiped from my mind. After working all my life to provide for myself and my family and being lucky enough to be able to do it by caring for and helping others, suddenly my world came to an end.

My family and friends were worried about not only my health, but of my state of mind. When I opened the notice that I had been accepted by the Social Security Administration that my first time application for disability had been accepted, I broke down and cried, but not in happiness. You see, to me, this meant my life as I knew it was over.

Patriots Soapbox 24/7 YouTube channel and their message of hope and love for all mankind along with support from the people in the live chat became a lifeline that I grabbed with both hands. To be able, in my own small way, help spread the truth about what has been going on in our government for many decades has been an integral part of my coming to the realization that we each can make a difference and effect positive change by coming together for the greater good, not only here in the United States but worldwide.

Thanks to President Trump and his incredible accomplishments these past few years my outlook on life has improved. I may never be able to do the things I took for granted again but when life gives you lemons it’s up to you as to what you do with them. Me? I choose lemon meringue pie every time!

I choose to be a part of a community which supports our country and which is determined to steer it back to a free republic.

I have been what you may call a “conservative” from the time I first registered to vote during the Reagan years, although I’ve been a registered Independent all my adult life.

I voted for Reagan, and for H. Ross Perot (twice) because they believed in smaller government and fiscal responsibility. I voted (and will vote again) for Donald J. Trump for the same reasons. As successful businessmen Perot and Trump were capable of stripping away the chaff and corruption while keeping the productive elements in each department of our federal government.

I believe that all people are capable of looking deep inside and changing what they don’t like for the better.

Even the people at Google are capable of change. I believe this because I have faith in people, in humanity, as a whole. I am not a perfect person. No one is. But I have learned to look at myself, my actions and to determine whether or not I have done things, said things, that may hurt others.

When possible, we should all try to atone for our sins. First by apologizing to the people we have wronged  and then we must work to do what we can to repair the damage we have caused.

Google has such a wonderful opportunity to provide to us here in the United States and worldwide non-biased accurate search results. Will they look inside themselves and their company policies and really see the darkness within?

If Google and it’s other companies really think that everyday hardworking Americans will suddenly change their minds about who they vote for, what media outlets they get their news from, well they are sadly mistaken. We are by nature curious creatures for the most part, who can tell when we are being led in a certain direction.

Google is a monopoly, which is when a single company controls so much of the market share of a product or service that it significantly affects the terms on which others have access to it.

Yes Google, we are practically forced to use your YouTube, Chrome and Android along with your Cloud and Maps services because frankly, they have been superior to the smaller internet search engines. But new more secure internet search engines are popping up everyday that are not biased and which have not “accidentally” given over our personal data to hackers and ad companies.

So I am, as an everyday American asking Google to look deep inside themselves and their business practices to change their algorithms to a non-biased basis so that people will once again have faith in their search results.

It doesn’t matter who we are or our economic status, education, color of our skin, religion or where we come from. What matters is that we are all human beings, endowed by our Creator with certain unalienable rights to life, liberty and the pursuit of happiness.

Google, is it too much to ask that then I type “President Donald J. Trump contacts” into a search bar I get results beginning with the exact words entered?

Special thanks to Patriots Soapbox for giving me an outlet for my opinions and for encouraging me to write and to better myself.

Meanwhile at http://www.whitehouse.gov/contact they’re waiting for your invitation…