This past week the country was rocked by two (2) different mass shootings. The first shooting took place on August 3, 2019 in El Paso, Texas. The second shooting occurred during the late night hours on August 3, 2019 in Dayton, Ohio. Before any real investigation had occurred into the motives for the shooting, politicians and the media on both sides of the political aisle had taken to social media to:

A slew of media hit pieces have been released about Qanon and 8chan since these horrific tragedies occurred and they are dangerous because they attempt to drum of fears, hatred, ignorance and bigotry and target innocent, law-abiding private citizens.

Like something out of 1984, mainstream media bias in the Trump era has reached levels of cognitive dissonance not previous believed to be possible in the information age. Here are some recent examples of the mainstream media lies and double standards: 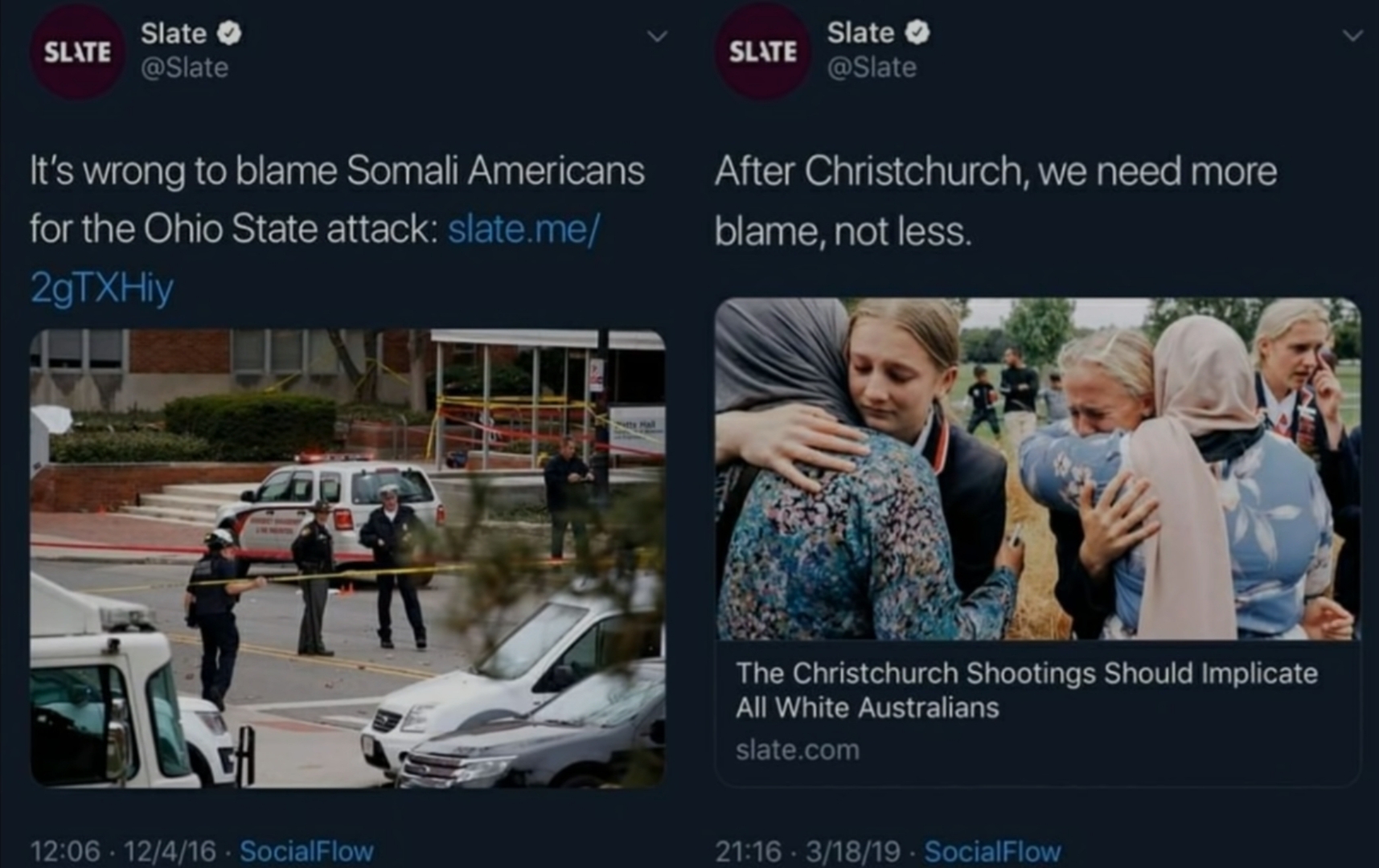 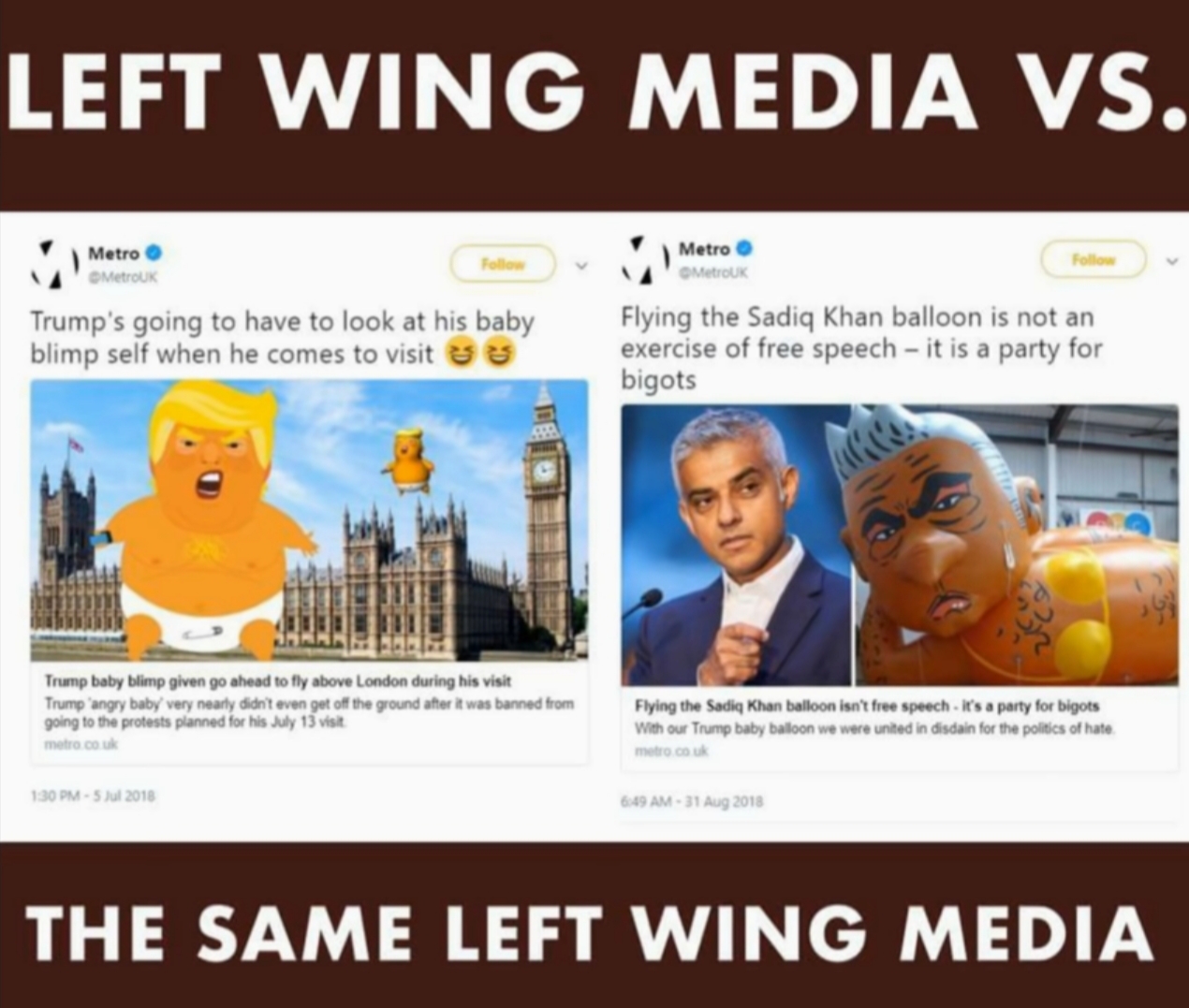 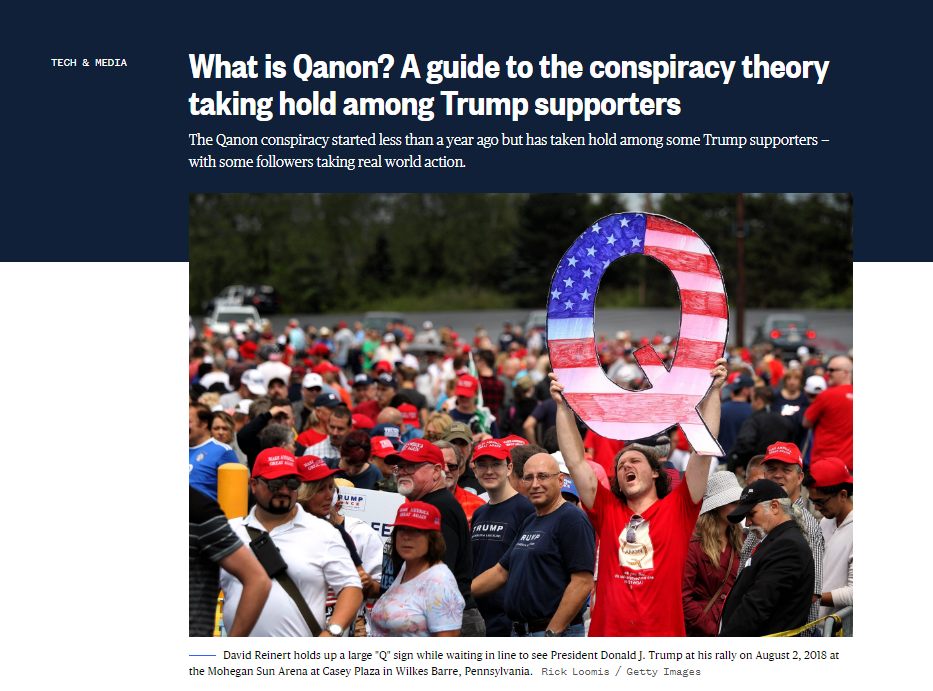 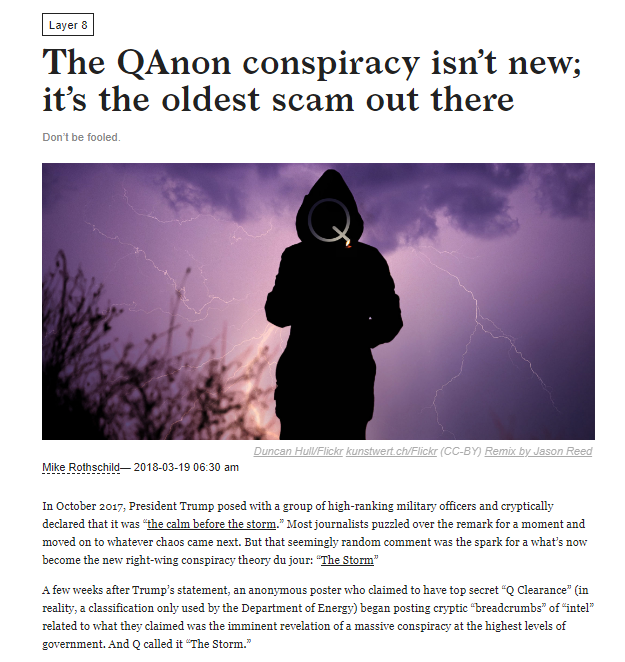 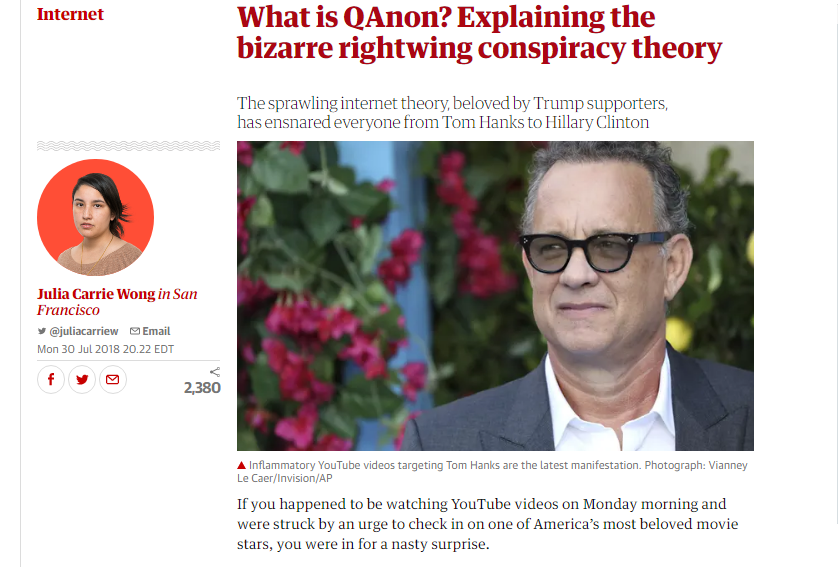 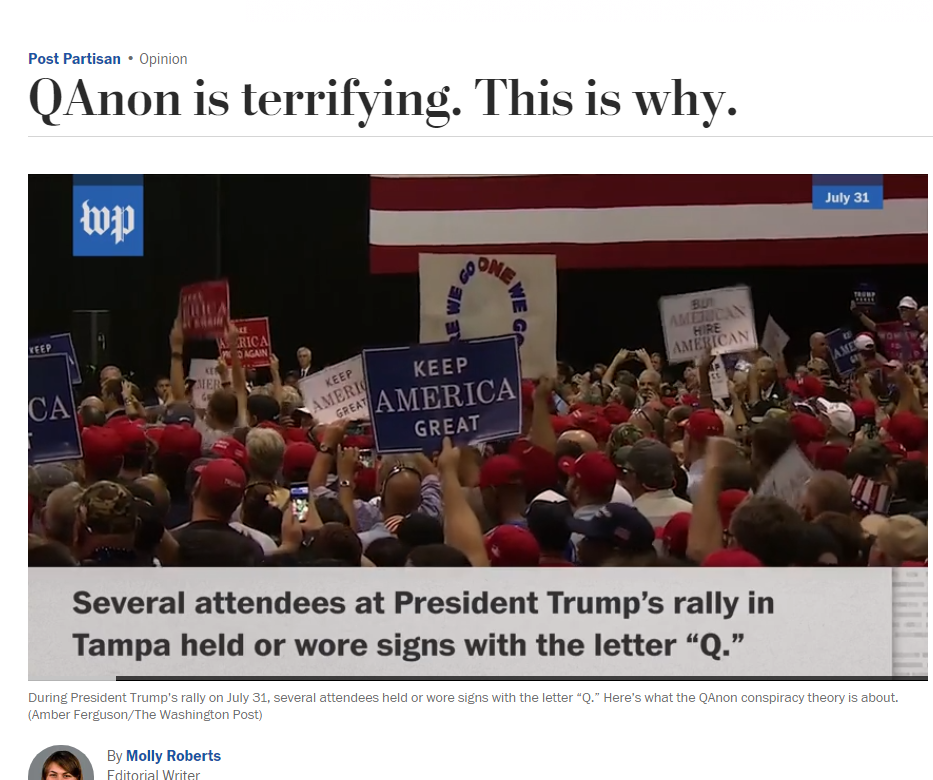 The breathless reporting and hysteria over anything even related or tangentially connected to President Trump or his supporters has been nonstop the past two (2) years, to the detriment of society at large.

From “Heading for Civil War” by Peter Skurkiss in American Thinker:

“Donald Trump’s opponents are completely unhinged. The hate and slander directed towards the president and his supporters is off the charts. The vitriol comes not just from the Democrat Party, the media, and the world of entertainment, but also from a sizable proportion of the federal bureaucracy and many seemingly ordinary people.

The media coordinates this campaign and amplifies the hate at every opportunity. Media twist every event, be it big or small, into a criticism of the president. The goal is always to present Trump in not just an unfavorable light but to make him appear too loathsome for polite society. And Trump is not the sole target of this demonization. It is directed at his supporters, too.

Where will all this lead? No less than Angelo M. Codevilla fears it could ultimately result in a bloody civil war. And if it comes to that, there’s no doubt where he places the blame…………

It’s not surprising that many ordinary followers have concluded that harassing conservatives in restaurants, airports, and public functions is not just permissible but praiseworthy, and if thousands of persons who exercise power over cities, towns, and schools have not concluded that facilitating such harassment and harm is their duty.

This is the toxic environment that the Democrats, in conjunction with the media, have created. Has Pandora’s box been opened? Are we beyond the point of no return? Are leftists and their liberal soulmates too obtuse not to expect that hate and violence will someday be answered in kind? These questions are up in the air. Right now, one thing is clear. As Yeats wrote: “The best lack all conviction while the worse are full of passionate intensity.”

The American people have been subjected to this overt display of arrogance and ivory tower brow-beating for far too long with the result that propaganda is no longer as effective as it once was. Now that the citizens have witnessed firsthand this toxic hate machine in action, mainstream media ratings are falling at records speeds. CNN has been losing its viewership after their clearly partisan hack coverage of the Russia-Collusion conspiracy theory.

The latest spin from the legacy media hate machine is that Qanon, who has been posting online since October of 2017, and all ‘Q supporters’ are ‘connected to militant white nationalism’ and ‘potential domestic terrorism.’ A simple review of the posts Q has made would easily refute this new claim, which is why the legacy media avoids addressing the actual posts themselves at all costs.

Q has said ‘Patriots have no skin color‘ because we don’t. We have a shared set of values, and love of country not hate of others based on bigotry and ignorance like the legacy media. You may review some of Q’s posts for yourself to see what has actually been said by Q: 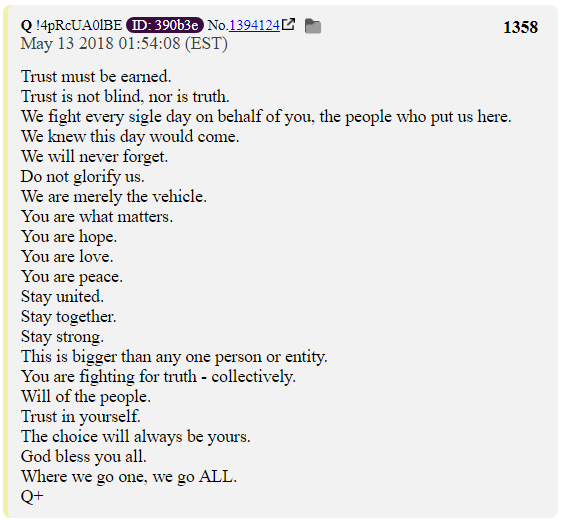 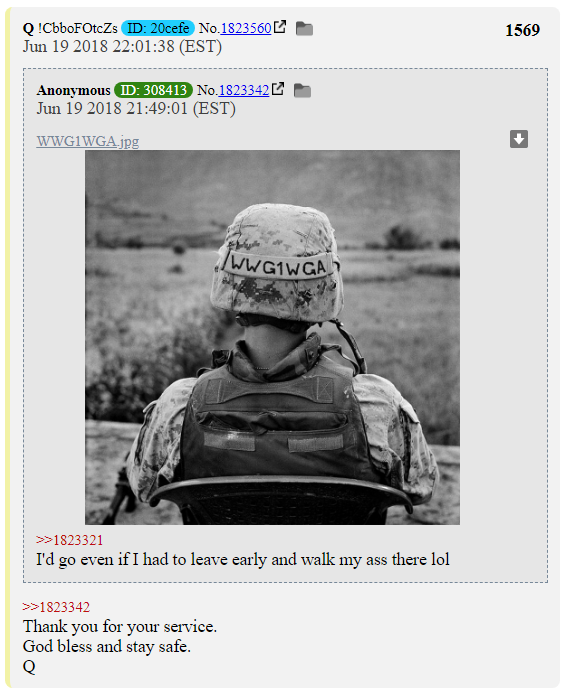 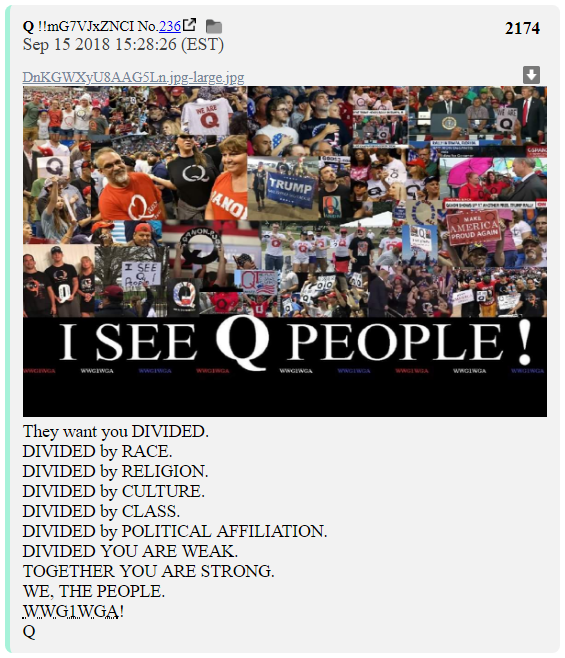 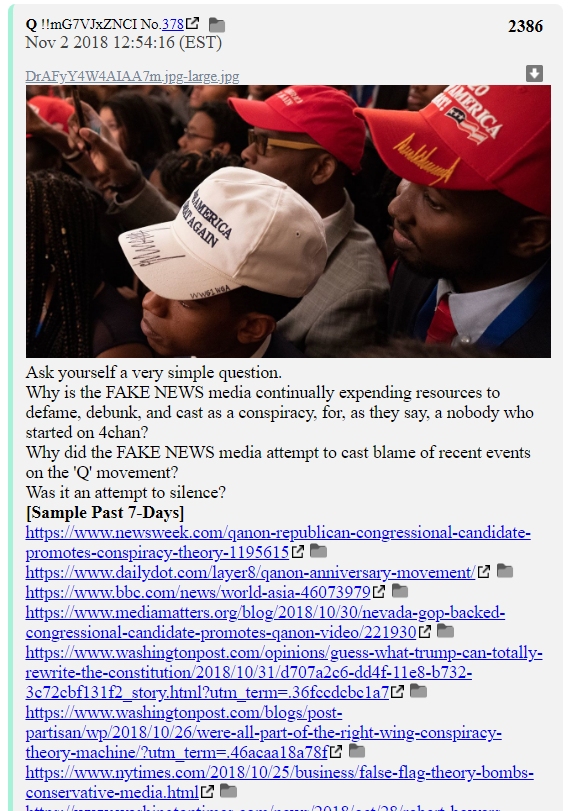 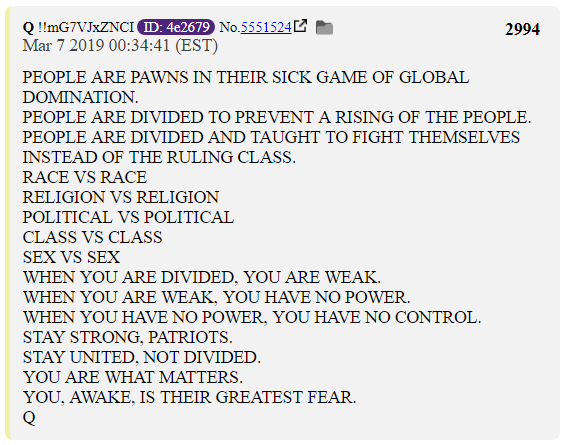 Indeed rather than radicalizing people, Qanon is addressing Americans innate need for equal justice under the law, and the restoration of the U.S. Constitution that had been all but abandoned in the name of protecting the wealthy, powerful and well-connected.  Q has, in my opinion, actually served to de-radicalize people. This has led many so-called ‘blackpilled’ people to complain that Qanon is a Trump base pacification psyop. Still others believe it was created to let the people know their concerns were being heard and that behind the scenes, good guys are working hard to hold the criminals responsible. Q has urged us to trust the military, as they are our sons and daughters, brothers and sisters. Q has urged Americans to have faith in their fellow countrymen and in our law enforcement.

To claim that somehow this is a violent and dangerous movement is absurd on its face. The legacy media has really hit an all time low with their propaganda. The people are waking up and even a mountain of lies cannot prevent even the smallest truth from breaking through.

I will leave you with a pertinent observation from Zach Haller regarding the Washington Post’s truly Orwellian coverage of the Q phenomena:

“While the Post sought to spin Q followers as delirious for thinking justice will be served to the treasonous political operatives that have infiltrated American media, this is but one more lie on a long list of them. One look at the growing list of sealed indictments and Inspector General probesmakes it undeniably clear that Trump is fighting on behalf of Americans against the Deep State and the “fake news” fourth estate in their efforts to undermine American interests in favor of a globalist agenda.

As Americans await FISA declassification, Clinton, Obama, and the other great deceivers’ only recourse will be to continue to rely on false narratives seemingly engineered by George Orwell’s “Ministry of Truth”. As the crimes of the Democrats are laid bare in front of civil and military courts in years to come, the media conspiracies implemented to cover them up will be too, and the Clinton-Obama media co-conspirators’ impunity will not hold.

From now on, journalists will have their trustworthiness examined as new media emerges alongside Q and in the vacuum for truthful reporting created by big media’s conglomeration in support of the Clinton-Obama regime. Any refusal by a journalist to hold the Deep State and its media apparatchiks accountable will expose a journalist who has taken the side of the corrupt establishment. The citizen journalists and truth-tellers that rise up to replace them will have earned their place on the right side of history when it truly mattered most.”

I pray that one day the legacy media is held accountable for all the lives they are ruining with their toxic hit pieces and constant vitriol directed to the American public. Like Vice media reported after the El Paso shooting in Texas ‘8chan isn’t the problem, America Is‘ which shows clearly how they feel about the average American citizen they claim to represent.