May 26, 2020 – Picking up from where we left off regarding the Moretti men and their family connections. In Part I and Part II of this series, we looked at the arrest of J. Scott Moretti for forcible sodomy of a child, between 2011-2013.  We discovered his close connection to John Kerry, his involvement in the failure to support the Benghazi defenders, his father’s CIA work and his brother, Father Mark Moretti. There seems to be a connection to the Finders – a CIA-connected “cult” that appeared to be involved in child pornography and trafficking, whose leader Marion Petty, aka the Game Caller operated out of Culpeper, Virginia.

Let’s continue our research of John Moretti Jr. – the father.

He was a charter member of SIGNA, the secret society of retired security agents for the CIA. Quoting from this article:

The SIGNA Society, whose name means ‘written seal’ and whose motto translates as ‘To have served is the Greatest Virtue,’ is the Central Intelligence Agency’s barely acknowledged secret society of retired agency security officers.

… memos from CIA’s leadership state that SIGNA members support the Agency in various ways, sometimes compensated, sometimes not. SIGNA members have been known to contribute significantly as on-call investigators, by assisting with the Agency’s covert activities …

Still quoting from the same article:

The SIGNA is very supportive of the Agency, and as I observe the group, all tenaciously defend the organization in both private and public occasions. 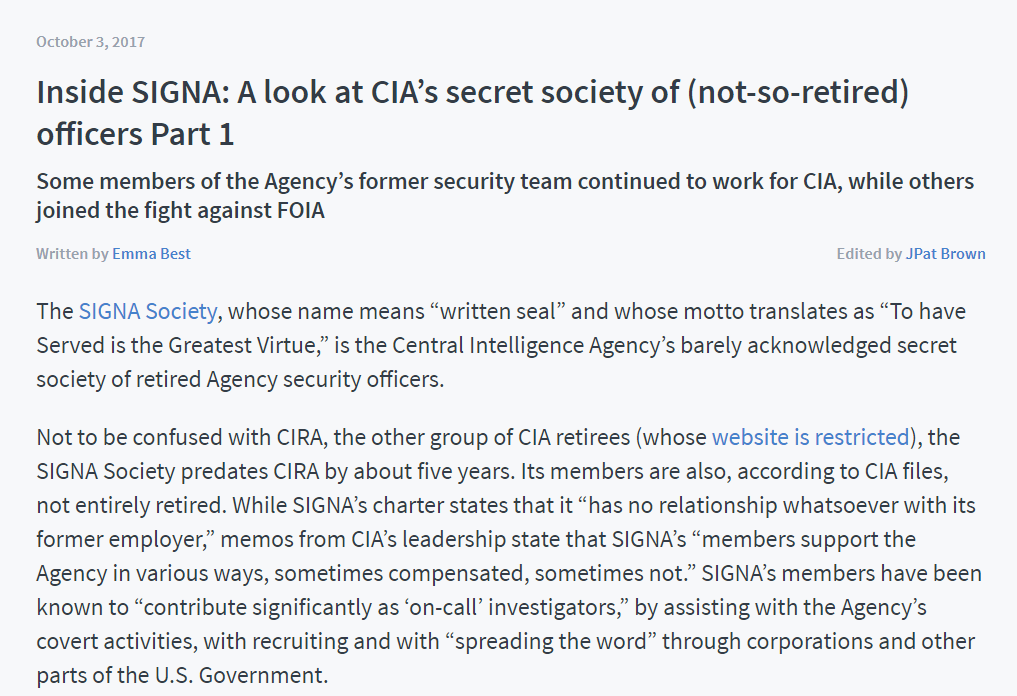 Inside Signa: A Look at CIA’s Secret Society

With that being said, we can clearly see where Mr. Moretti’s loyalty lies. Is it safe to assume once an agent, always an agent — at least in the context of never retiring? How about in the context of defending at all costs, criminal covert activities of the CIA?

These memos, so noted above, specifically mention:

The Administrator’s strong stance on the importance of security …

… the recently signed legislation on the protection of identities of those under cover.

The Morettis played an intricate part in the diplomatic security provided to top government State Department officials during their time of service. These memos reinforce the idea that security was and is so important to these people — perhaps because they were associated with or participated in nefarious activities requiring secrecy?  They went so far as to sign legislation to cover up their identities.

Compare that with what some of these same people have done to our current president and his administration, involving the unmasking and illegal spying of his administration. What hypocrites! Isn’t that treason?

And we don’t know for sure, but this memo from the CIA names a Moretti and please note the date written on it. Could this mean a Moretti had something to do with the JFK assassination? The date is eleven days after the assassination. 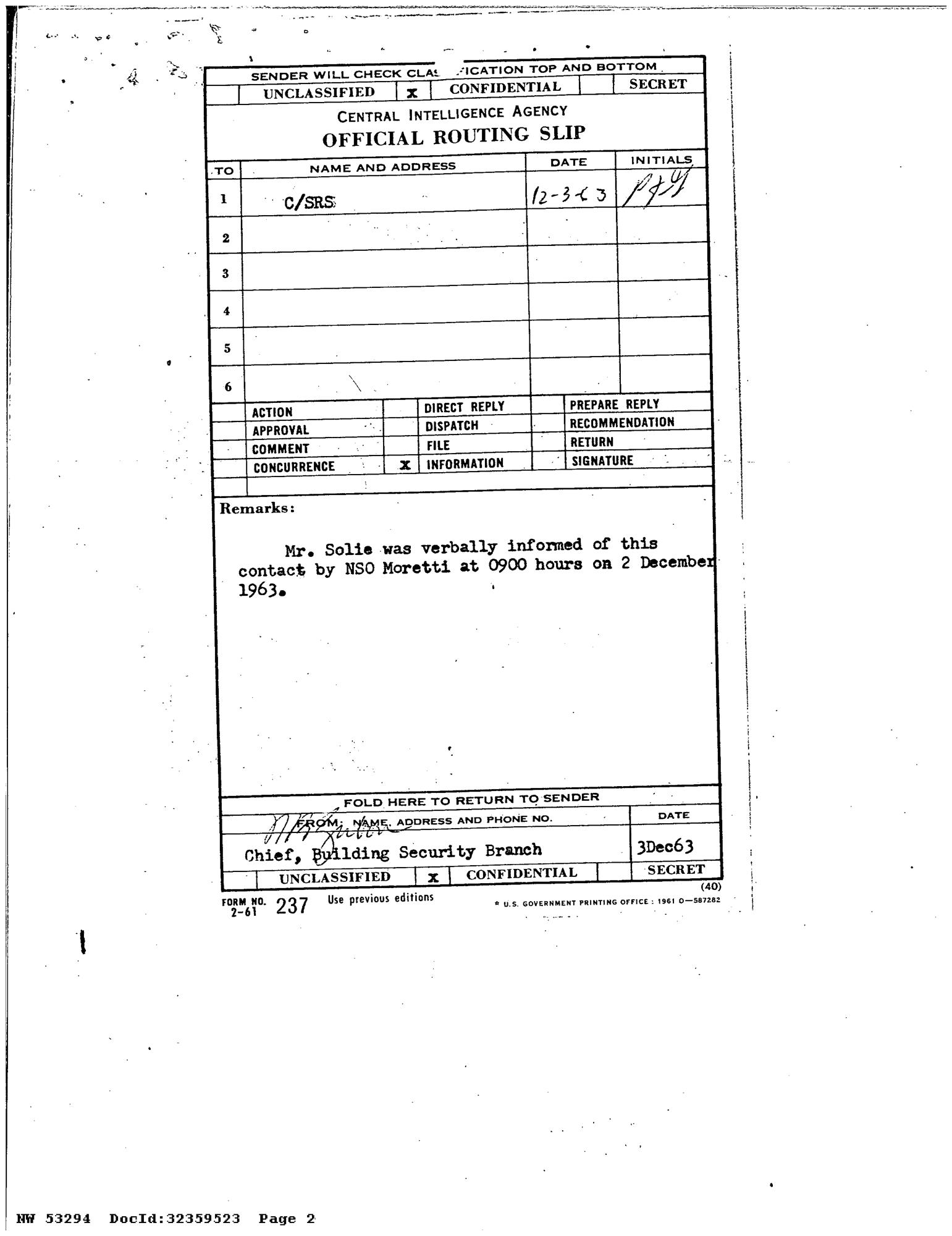 Perhaps we will never really know, but what are the odds that name and date would appear on a CIA memo?

It’s becoming apparent that security means a lot to those involved in the Intelligence Community (IC), mainly to cover their own sins, so to speak.

And speaking of sins, let’s take a look at the other son, Father Mark Moretti.

According to this article by the “Precious Blood Catholic Church:”

… Under the direction of his ‘devout’ parents & grandmother, he attended regular Mass & Holy Hours.

Still quoting from their article:

… Assisting in the formation of his faith was his Catholic education from St. Rita Parish in Alexandria, where he would later be assigned as a parochial vicar, Bishop Ireton High School in Alexandria; and Allentown College of St. Francis de Sales (now DeSales University) in Pennsylvania.

Here is where his family connections begin to appear on his resume. Father Moretti was:

… recruited by the U.S. Dept of State as a Special Agent for what is now called Diplomatic Security Service (DSS), which according to its website, is a ‘global law enforcement agency.’

You have to ask yourself why? Why is a priest recruited by our government as an agent for this DSS? Better question is, why would a priest be an agent of a global law enforcement agency? Unless … it’s an inter-generational appointment, in laymen’s terms, like father, like son? Perhaps the apple doesn’t fall too far from the tree?

Quoting from a WikiLeaks email that exposes the whole Moretti family and their long history of involvement within our IC:

During his (Father Moretti’s) first two years of college, he worked summers at the CIA in the Directorate for Intelligence Office of Geographic and Cartographic Research

In his 10 years with DSS, Father Moretti’s career encompassed all these areas and more. His assignments included the Washington Field Office, the Secretary of State protective detail, the Security Command Center, the Counter-Intelligence Staff and the Regional Security Office.

The WikiLeaks email is quite lengthy, yet detailed on Father Moretti’s biography. He was the FIRST chaplain of the DSS. Some of the titles and positions given to him:

I would be interested to know what one does to receive so many titles and positions of power. In my experience, one does not acquire such accolades unless his achievements warrant them.

As we follow his priestly career, we find that he has defended those alleged with sexual abuse in the Catholic Church. For example, Father Moretti lends his opinion for a priest facing defrocking for sexual abuse, claiming the priest had

But considering his resume, who he is related to and the recent arrest of his brother charged with sexual assault, what are the odds he is telling the truth?

Now let’s consider the circles Father Moretti ran in. It doesn’t appear to matter which side of the aisle he is on, politically speaking, meaning Republican or Democrat. 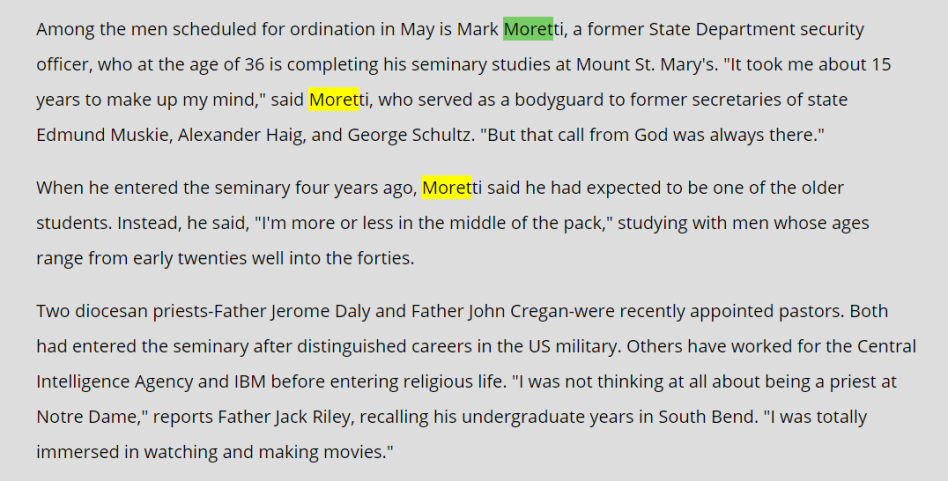 According to this article, Father Moretti …

All of these men were part of the Reagan administration, which we will research later.

So, how affiliated is Father Moretti with most Catholic sexual abuse allegations? Considering his brother’s arrest on sexual assault charges just recently, it makes you wonder, doesn’t it? I’ll leave you with this, until we update this article with all the new finds we dig up.

Father Moretti apparently uses his “cloth” (or priestly position) as a front for the CIA. Does this make him untouchable? I don’t know. But looking at these pictures, it makes him sick. Who does this?

Father Mark Moretti and his role-playing for children

As you can see, his prior work for the Department of State is mentioned here. Was he part of the Finders? Does he know Marion Petty? Is he still working for the CIA? Remember he ‘interned’ there one summer?

The Moretti story is one that is still evolving. We have yet to see the release of the indictment and court papers regarding the J. Scott Mortetti sexual assault case. The shadowy nature of the family and what little information is available in open sources, it is difficult to lay out a thorough case. What we have done is demonstrate circumstantial evidence that this family is involved in sexual abuse, cover-ups, CIA societies, diplomatic security, the Mafia and potentially even the JFK assassination. One might say, a small glimpse into the life of a generational cabal family.

Here are links to some articles that may be related and contain some interesting information. Two of these articles are actually obituaries of former “SIGNA Society” CIA members. Please look at the few details given and the way they are written. The rest involve a Father Moretti of the only Catholic Church in Afghanistan, run out of the Italian embassy and another potential connection to a Father Moretti that was in Australia at some point and had contact with the Vatican. We do not yet know if these are related Morettis but I find the connections too interesting to leave out: 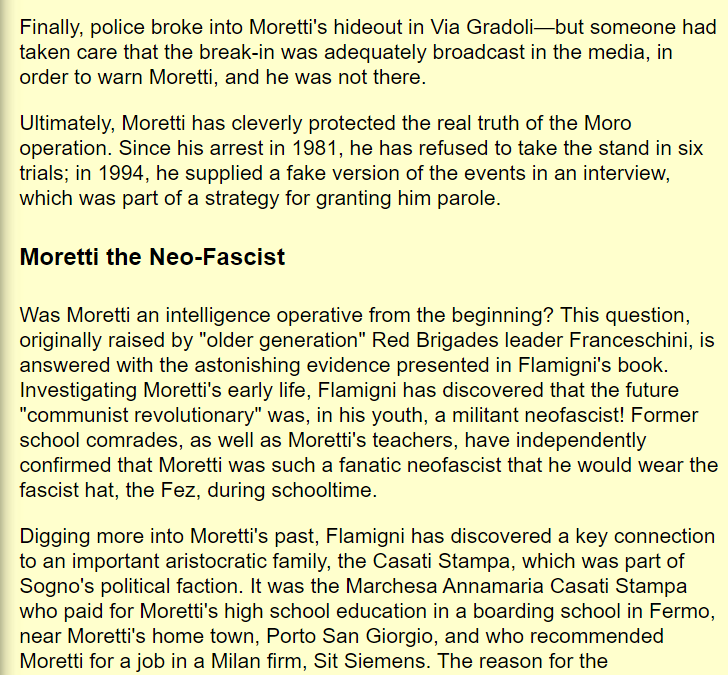 This article from La Rouche Pub talks about a Moretti – with intelligence connections running operations for NATO.

This War on the Rocks article looks at the historic connections between the Catholic Church and espionage during the Cold War up to the present.

This article discusses the relationship the CIA has fostered with the Vatican. 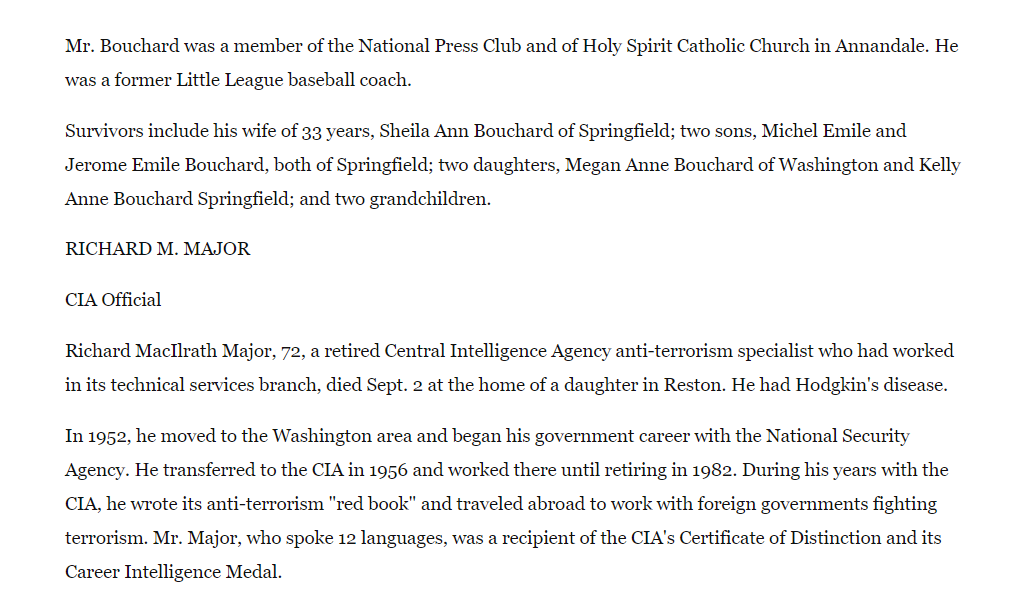 This is the first Washington Post Obituary that references SIGNA.

This is the second Washington Post obituary that references the CIA secret society.

The Wikipedia Page about the Catholic Church of Afghanistan, that was run by a Father Moretti.

This article looks at a “school of peace” run out of the Italian embassy.

This article looks at the kidnapping of a Jesuit priest in Afghanistan.

This article looks at the link between the CIA and Missionary work.

This article looks at the the Italian embassy church run by a Father Moretti.

This article looks at a Father Moretti with a Vatican connection involved in sexual abuse.